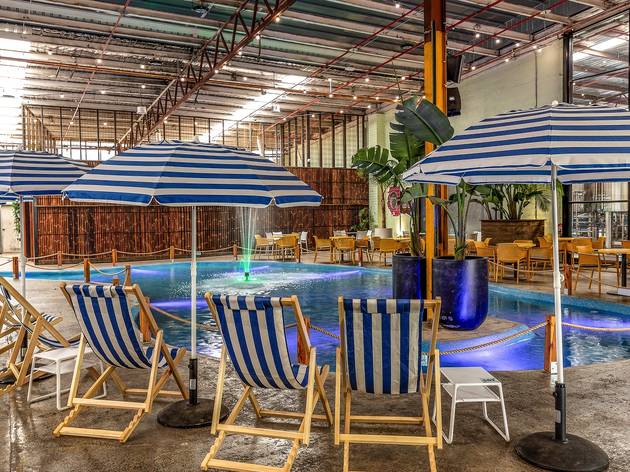 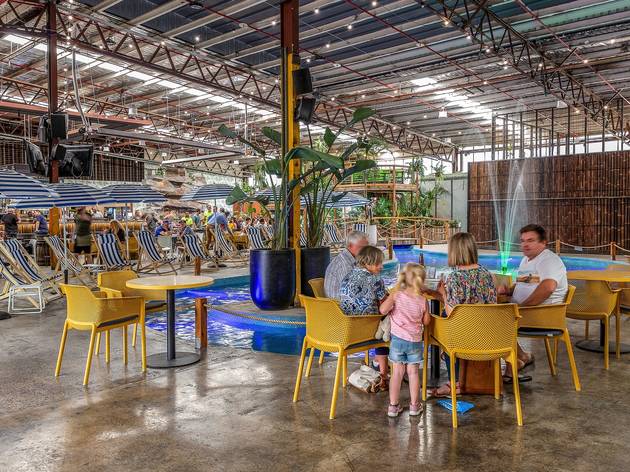 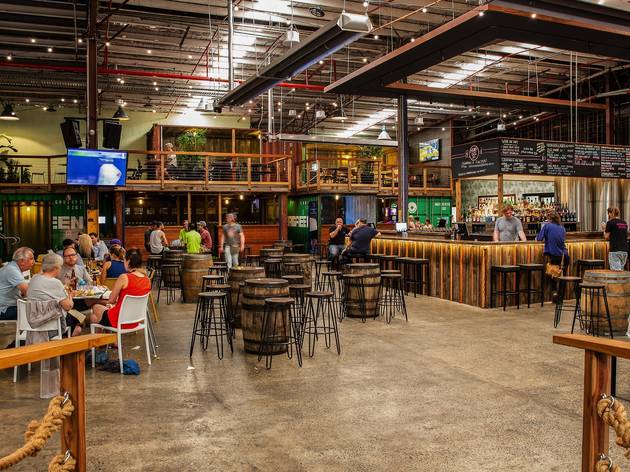 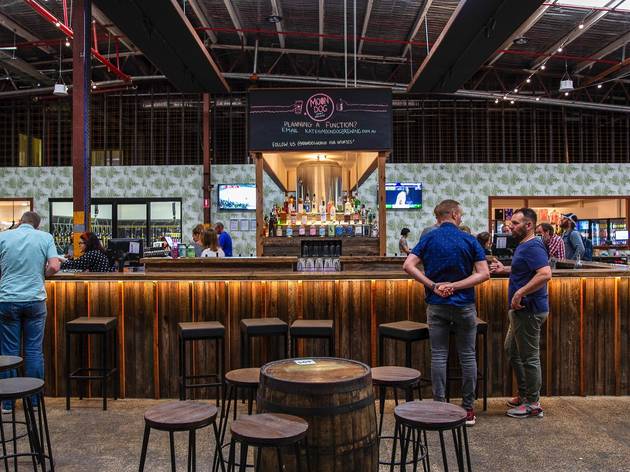 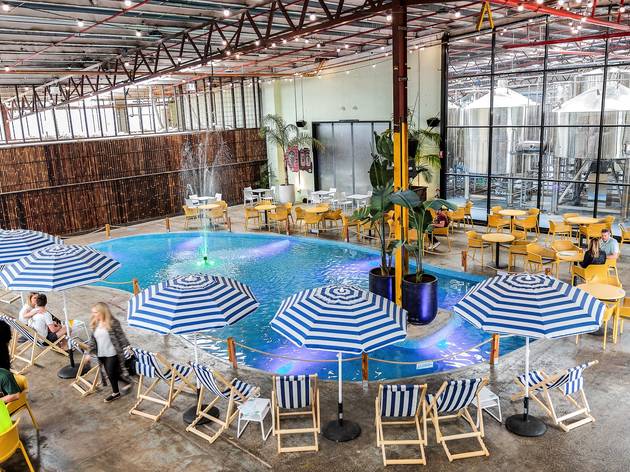 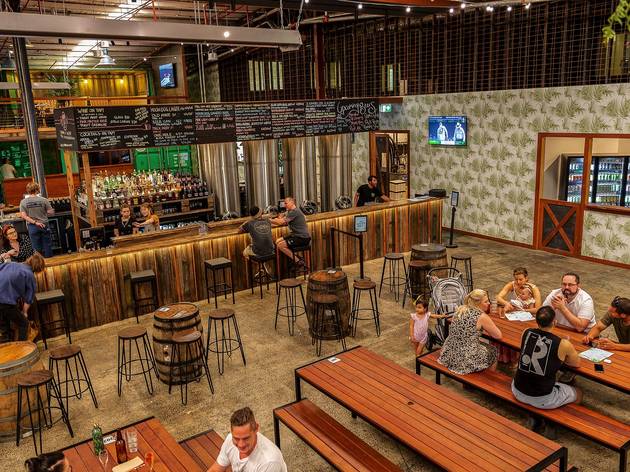 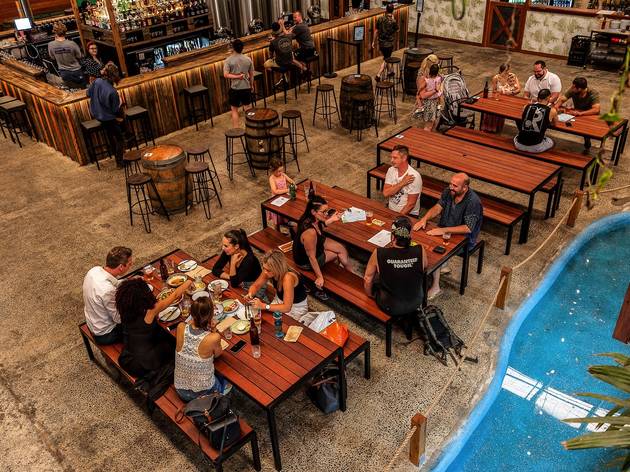 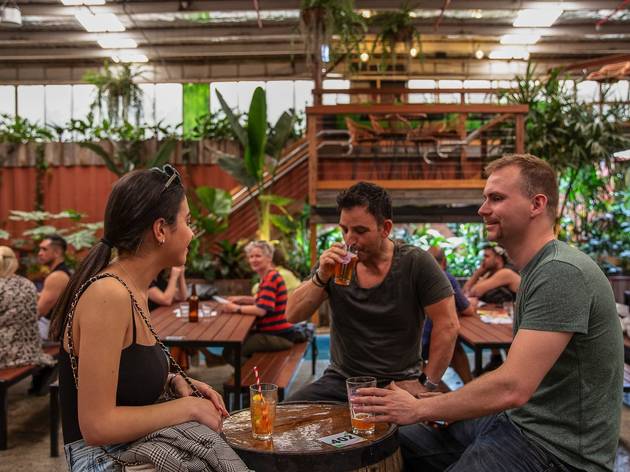 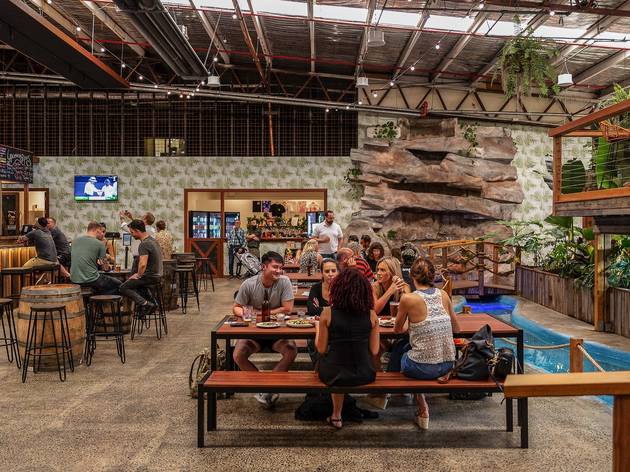 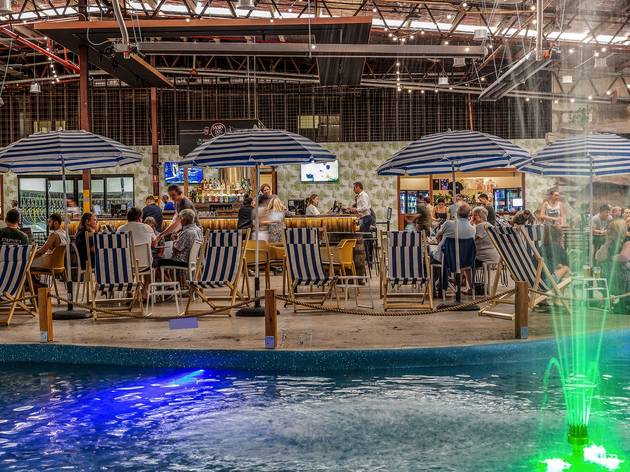 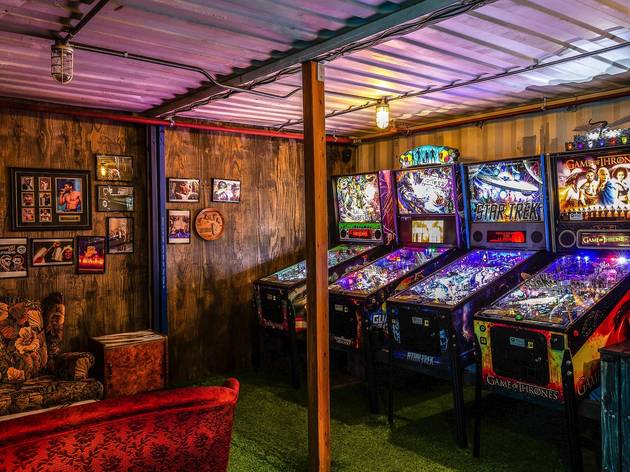 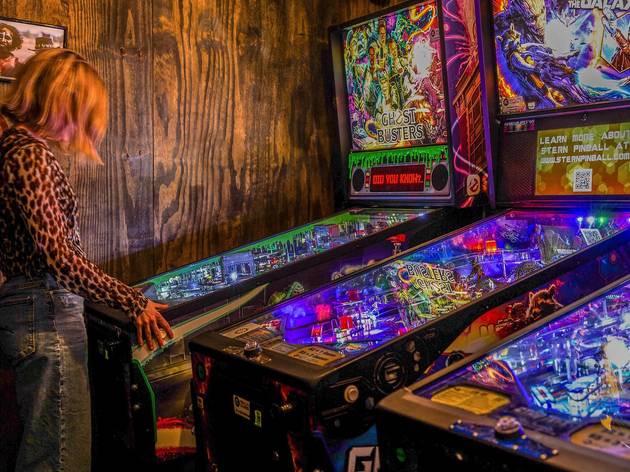 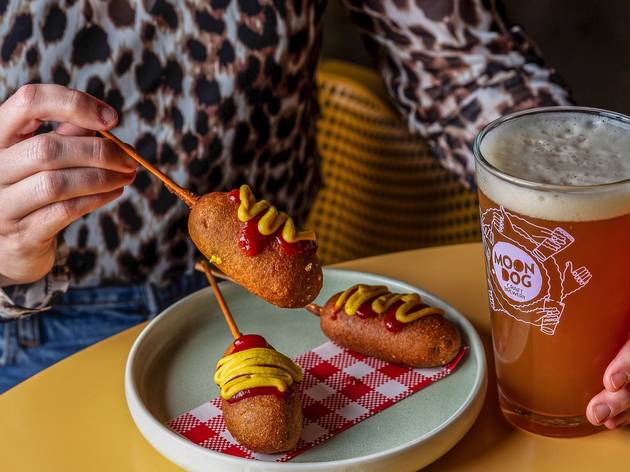 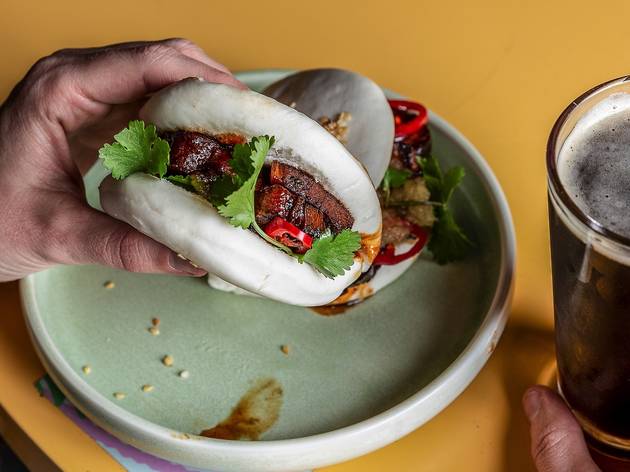 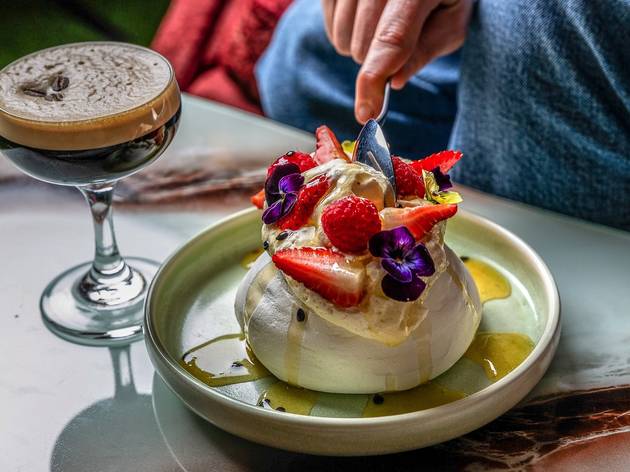 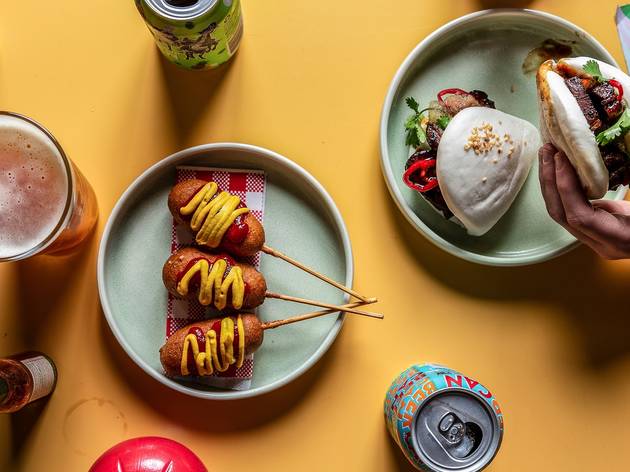 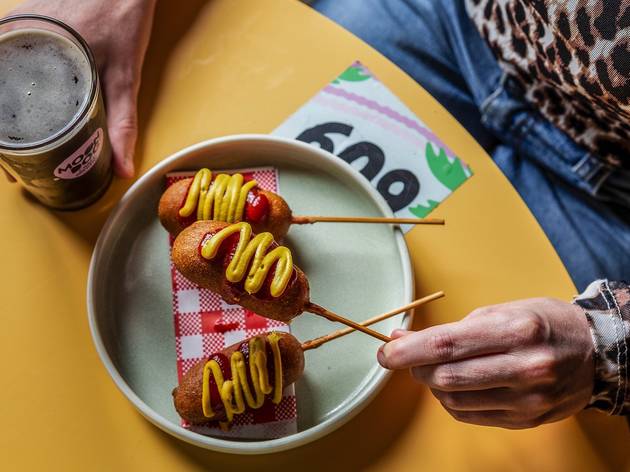 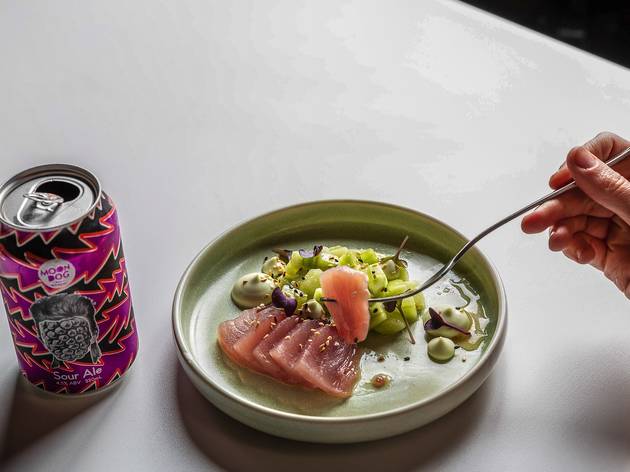 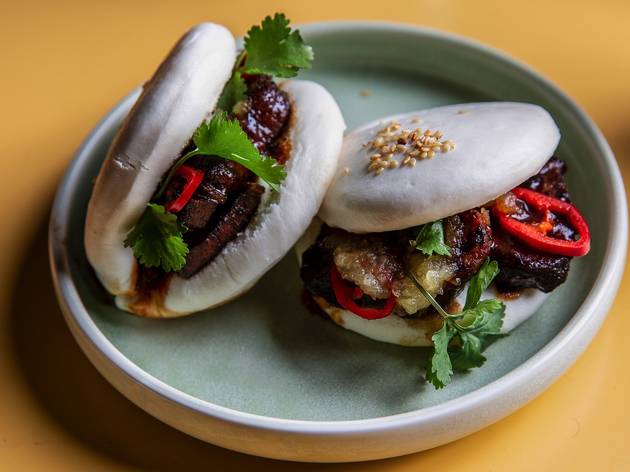 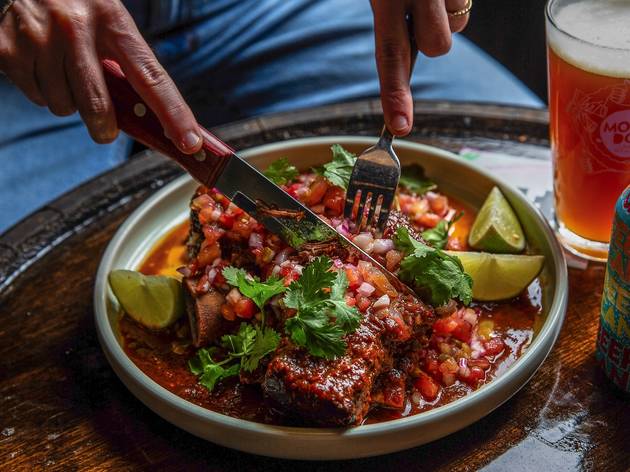 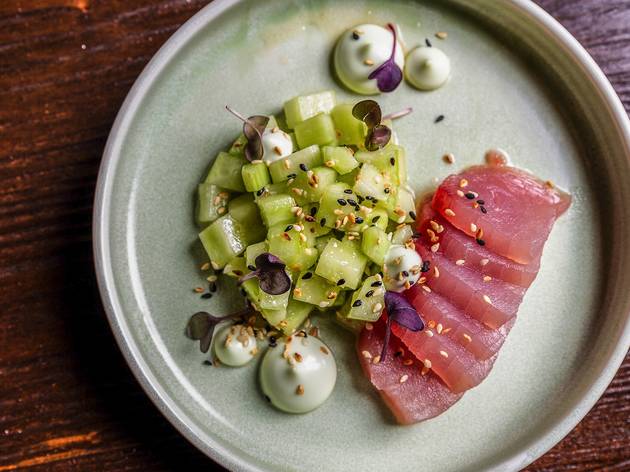 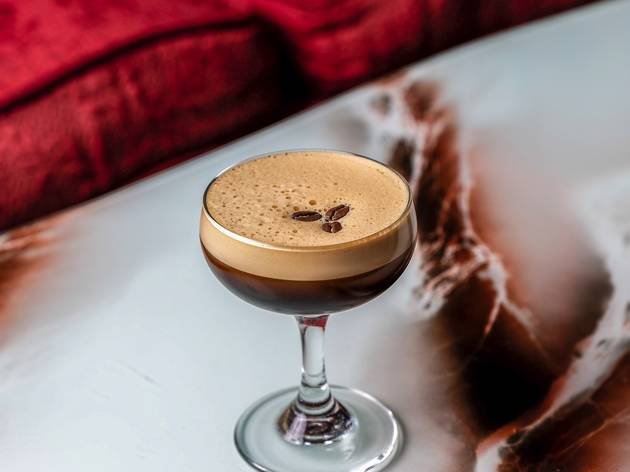 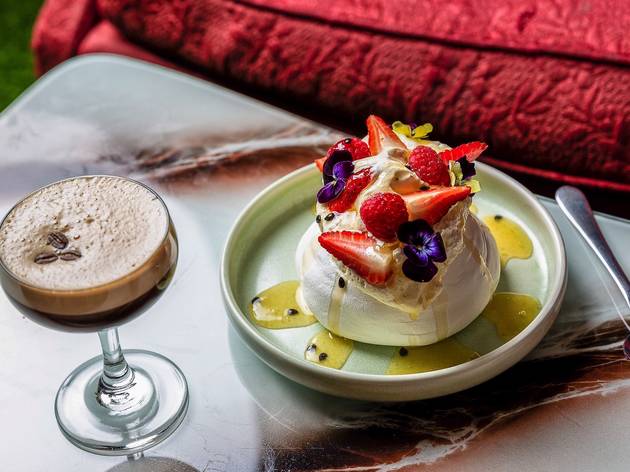 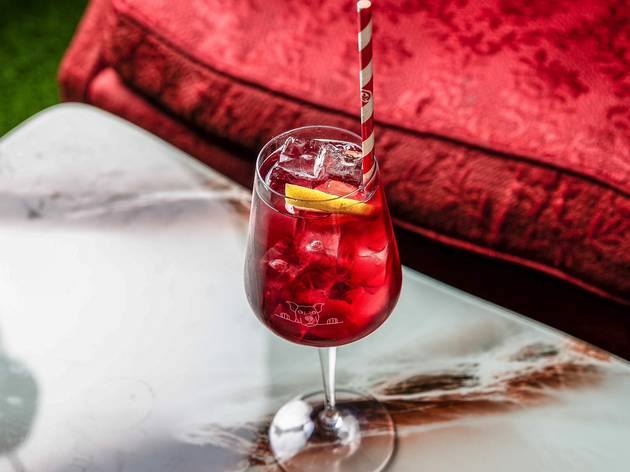 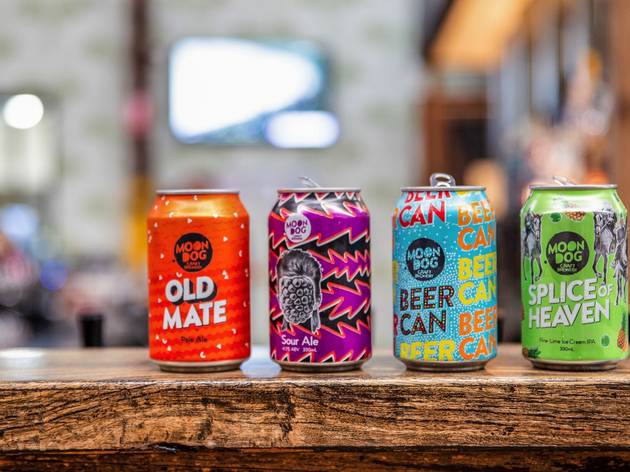 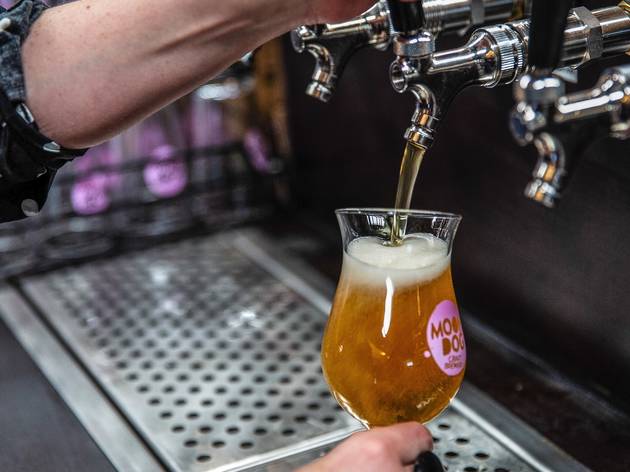 The name makes it sound like a theme park of sorts, and that’s not far off. An indoor lagoon takes up one side of the space, overlooked by striped umbrellas and fed by a stream that flows from a five-metre indoor waterfall made of fake rocks. The space, a huge warehouse in the industrial back streets of Preston, recalls childhood memories of summers spent in cheesy water parks; there’s even a merch stand where you can buy packaged beers, T-shirts and fluoro stubby holders. Potted palms and walls of greenery flank double-stacked shipping containers, which have booths inside and balconies overlooking the room on top. One is filled with pinball machines and lounge furniture; another houses a tropical-themed bar bedazzled with fairy lights.

Despite the immensity of the space – and Melbourne’s crappy weather – the place is packed. Disco and ’70s pop rise above the cacophony of big groups of mates and young families occupying every inch of available real estate. The full-sized playground is overflowing with the progeny of Preston, and prams are parked around the rest of the room. Sneakers flash as parents pull toddlers away from the enticing waters of the lagoon. But despite the family vibe, the young and the childless are well represented, and there’s even a buck’s party pre-gaming for a big night on the town.

Today, the machine is humming, and you never have to wait long for anything. Behind the huge three-sided bar that juts into the room like a beer-fuelled command centre, more taps than you can count are pulled by a phalanx of bartenders, all friendly and accommodating if a bit shell-shocked. Splice of Heaven Pineapple IPA does what it says on the box: a creamy, tropical and not-too-hoppy pale ale that’s perfect for a hot day. David Boysen-Bowie is a juicy and well-balanced boysenberry sour that, like most of the beers here, is more about smashability than pushing boundaries. These guys are clearly having a blast coming up with concept beers without veering too far into beer nerd territory. Accessible fun is the name of the game, and they play it well.

The silly/serious sensibilities of venue manager Chris Hysted-Adams (ex-Black Pearl, Fancy Free) are on show, too, with a cocktail list that includes Espresso Martinis on tap, coconut-washed Tennessee whiskey and slushy machines full of Piña Colada. The food menu is a mishmash of beer garden favourites including chicken ribs, mini corn dogs, burgers, slow-roasted lamb shoulder for sharing and of course a kids’ menu that doubles as a colouring-in sheet.

Roast pork bao buns are tasty if a bit bland, but a dish of sashimi tuna is constructed with thick slabs of raw fish alongside super fresh and crunchy chunks of marinated cucumber and zippy wasabi mayo. It’d be a winner in any of Melbourne’s trendy Asian fusion restaurants.

Preston, eh? As Melbourne continues to outgrow itself year on year, the decentralisation of entertainment was sure to follow. The folks out here want beer, and this is where they live, so why bother putting it on a truck to Fitzroy? Dig a lagoon, build a playground, chuck on some tunes and away you go. This is the Melbourne suburbs, 2019, and it’s even better than spending the arvo at Bunnings.