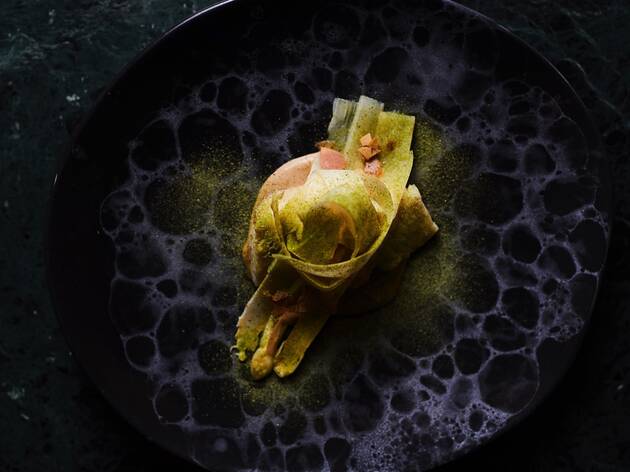 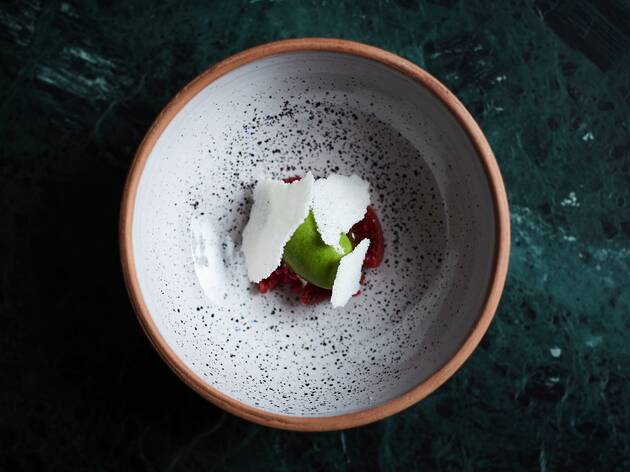 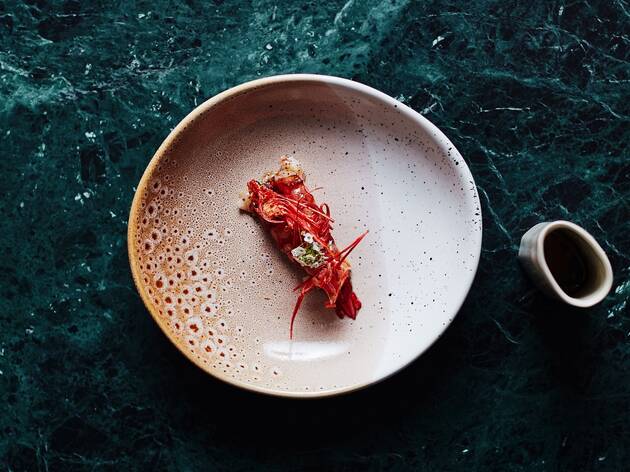 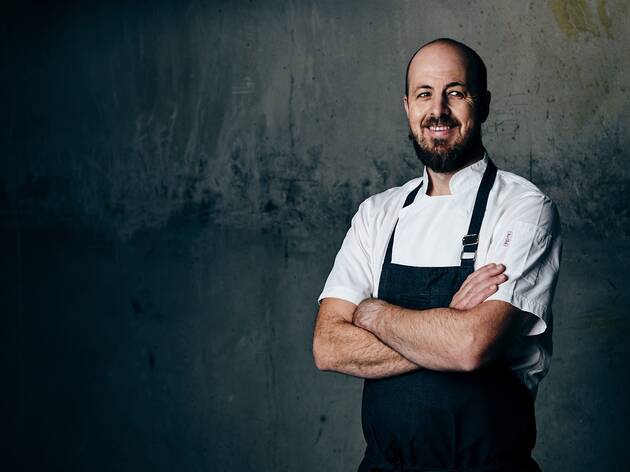 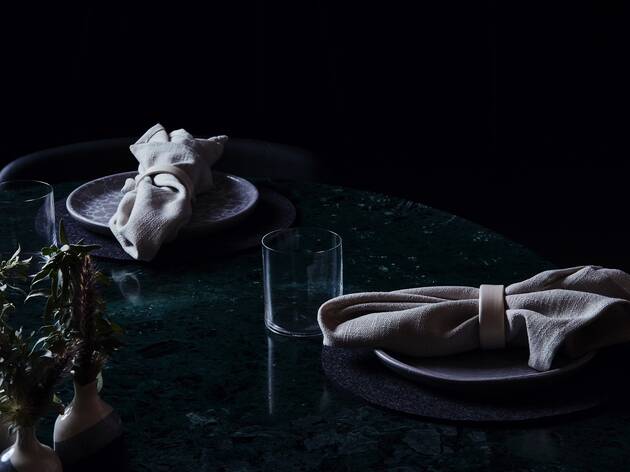 Update: We attended this venue in December 2018 and some details may have altered since then.

You could be forgiven for thinking the Uber driver has made a star-losing mistake pulling up outside Navi. Something about the off-village Yarraville street, the nondescript neighbours, the hazy curtains obscuring the view inside, conjure that unsettling feeling of “we’re in the wrong place”.

But, lo: Navi does indeed lurk behind those gossamer threads. Inside is a fine dining den of distinction, where cork tiles line the ceiling, moody hues rule the walls, and a mere 25 seats dot the narrow shopfront floor and the bar overlooking the cooking action. Taking the great leap into the ownership unknown, chef Julian Hills has bet his family’s future happiness that Yarraville can sustain a proper restaurant where tweezers are part of the kitchen arsenal and a $120-a-head, 10-course tasting menu is the price of admission. Considering the current wait for a couple of seats at the bar is two months, he’d appear to be onto a winner.

As befitting a chef who helmed Mornington Peninsula winery restaurant Paringa Estate for the past six years and left its mantle groaning with trophies, Hills wasn’t about to open a place with half-priced pizza on Tuesdays. Navi is a chef’s-own temple, down to the a la mode pottery Hills threw himself, the soundtrack of “I'm playing what I goddam like” and the snackage sent in to soften diners up as they acclimatise to the evening ahead (line honours go to raw wallaby and pickled flowers in its cured egg wrapping, ahead of an overtly sweet black garlic macaron sandwiching salty pops of trout roe).

Pea ice-cream with a feta sidekick and broadbean and almond crumble is a gentle meander through fields of green. A single, perfectly sweet scarlet prawn glistening under a chicken and seaweed glaze makes a statement with a puddle of prawn dashi cut with rose geranium, the texture element taken care of thanks to its own fried legs laid over the top like a Sicilian curse. A cracking piece of striped trompeter with white asparagus on a smoosh of fermented artichoke with clam butter ups the umami intrigue with the dried, crackle-like union of koji rice flour sheets with saltbush and puffed rice.

The menu changes sometimes daily, sometimes weekly, so it’s our duty to inform you the duck two ways is not appearing anymore, although it will be returning eventually. It is worth noting, however, that the neoclassical take is a good one. The dry-aged Macedon Ranges breast with a shattering edge of bird crackle is served on a sticky, sweet-salty plum glaze; the rich comfort of a duck egg chawan mushi, made with bones turned into consommé, is overlaid with nubbles of fermented carrot jerky and an ingratiating hint of aged balsamic.

Does everything deserve the heart eyes? Not exactly. Service veers from pro to relative greenhorn. Salt is MIA from tables, in the way of all of the modern finer diners - an issue when a few dishes are underseasoned.

But: two desserts. Three, really, if you count the petits fours at the end including little native fruit jellies and wattleseed choc caramels. Dessert no. 1 is the star: a simple tricolour of herby green sorbet, poached quandong and evanescent milk skin shards that’s like the ice bucket challenge applied to the palate.

Whichever way you slice and dice it, Navi is a commitment. It’s a commitment just to get a seat (Hills recently changed the bookings system so tables are released two months in advance – make a note in your diary, folks). It’s a financial commitment, especially once you’ve kicked the tyres of a mostly-Oz wine list (a ripe Hochkirch Riesling; a smashable Jamsheed sangratino; an elegantly flinty Mount Mary chardonnay) which matches the menu blow for stylistic blow. And what do you get in return? Well, Hills’ hands-on approach to proceedings lends the agreeable feeling of fine dining done less as sacrament, more as soul - plus you get to play a walk-on part in the ongoing debate about the sustainability of the small chef-run restaurant. As the ad says: priceless.