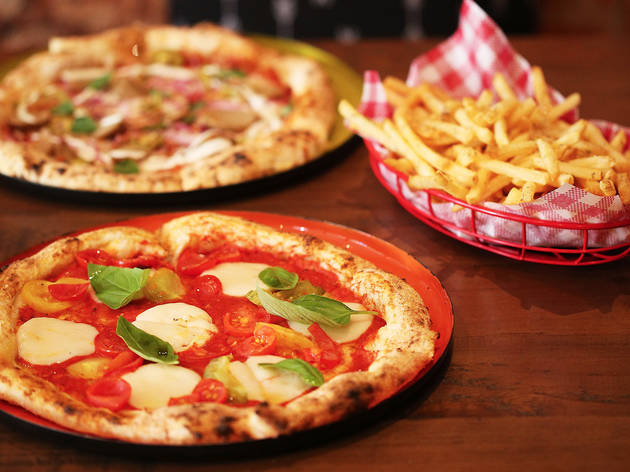 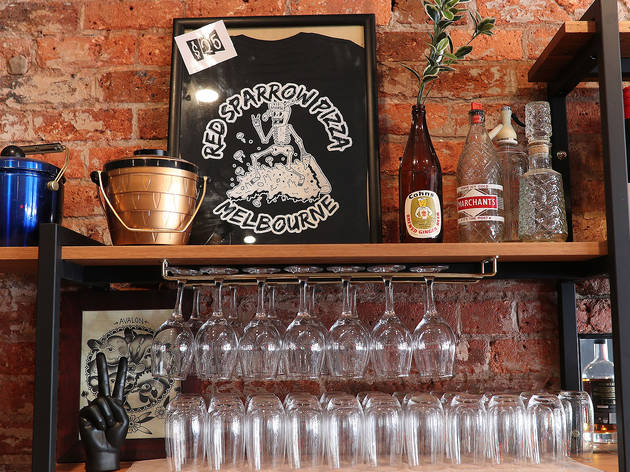 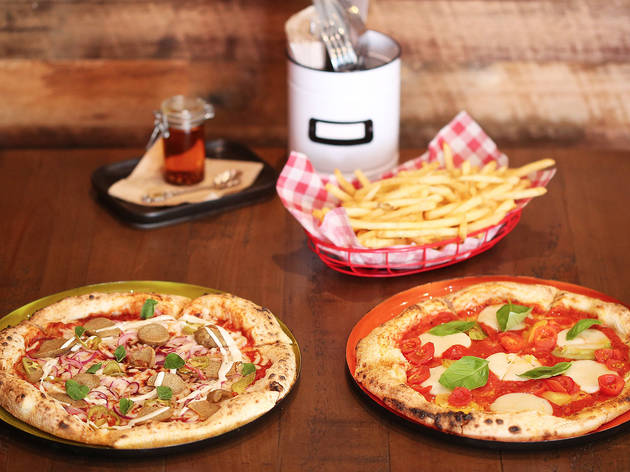 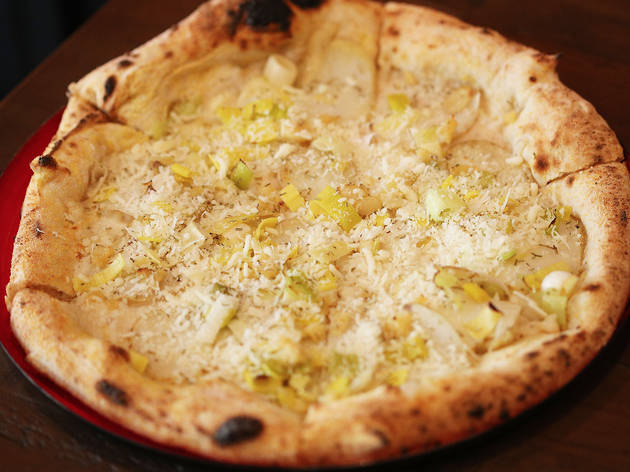 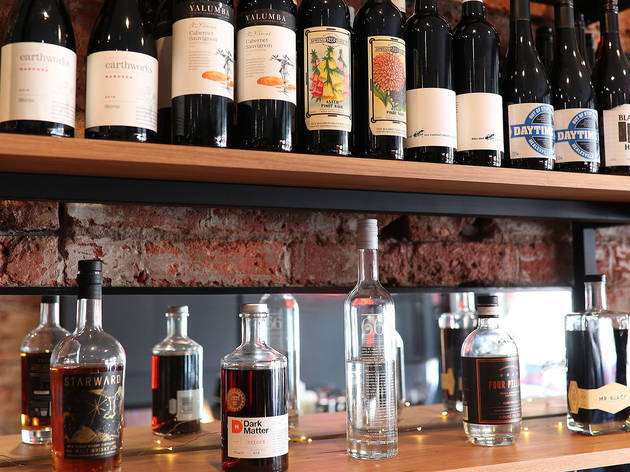 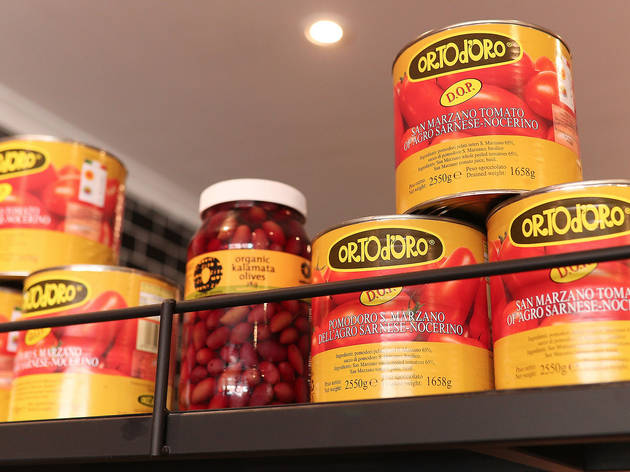 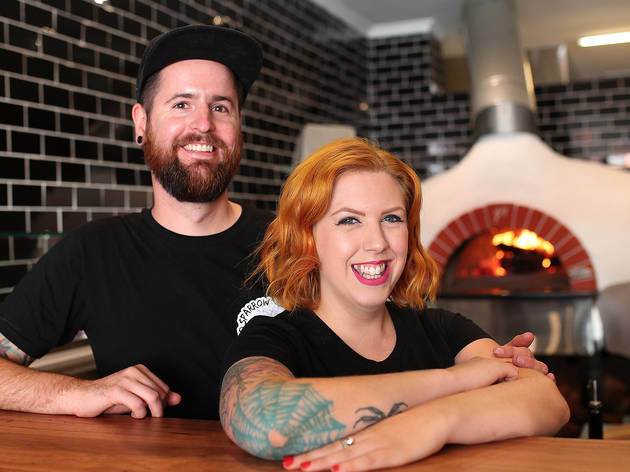 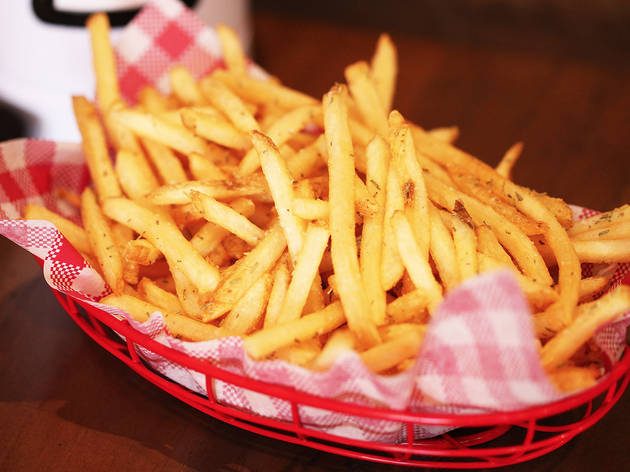 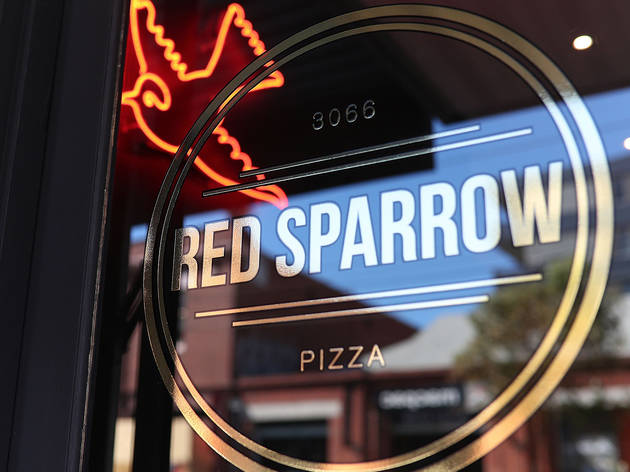 Here’s the thing about vegan cheese: it’s usually terrible. With the exception of a select few brands, cruelty-free dairy treats are often either tasteless lumps of play dough or rubbery strips with a chemical tang.

How glorious, then, to pick up a slice of fresh-out-the-woodfired-oven Margherita and bite into a dollar-sized dollop of creamy white fior di latte sitting atop a tangy, slightly-sweet San Marzano tomato base. The crust: thin, lightly charred, with just the right amount of chew. The pizza: entirely vegan.

This fantasy is now a reality at Red Sparrow Pizza. Months after opening, the 32-seat Collingwood cantina is packed with couples, mates, families and cyclists picking up takeaway on their way home from work. Everyone is taking their sweet, sweet time deciding what to order (how often are vegans free to choose from anything on the menu?). The centrepiece of the pint-sized venue is an Italian white-brick wood-fired oven flanked by shining black tiles. The glow of the oven, along with the red neon sparrow on the bare brick wall, fills the space with a warmth that is echoed in the enthusiastic staff.

Red Sparrow is the brainchild of co-owner and chef Michael Craig, last seen at vego Mex joint Trippy Taco. Together with his partner and Red Sparrow co-owner Shelley Scott, Craig (who is vegan) has spent innumerable hours perfecting his very own mock cheeses and meats, spurred on by the dream of enjoying the simple pleasures of pizza, chips and beer like everyone else.

The tinkering has paid off. That Margherita is a must-order, but don’t stop there: try the pepperoni pizza – the spicy star ingredient is made from tofu and gluten, with mozzarella fashioned from coconut oil and tapioca. Vegan parmesan made from coconut provides sharpness to the white base pizza, rich with mozzarella and topped with rosemary, leek and potato.

Not into faux cheese and meat? No worries. There’s a Middle Eastern-style hummus number, complete with a sprinkling of black sesame dukkah and fresh mint, or a smoky eggplant pizza with pear and rocket.

The vegan drinks list includes Young Henry’s or Sample lager, and just in case you were wondering, almost everything can be made gluten free, too. It’s a very inclusive pizza party.

In the past few years, Melburnians have welcomed an influx of new breed vegan eateries with open arms. Restaurants like Fitzroy’s Smith & Daughters and St Kilda’s Matcha Mylkbar (famous for its impossibly realistic vegan poached egg) leave the lentil-munching, kombucha-swigging stereotypes dead in the water – and Red Sparrow is the latest member of the club. This is pizza that no carnivore could refuse, served in a little place where good times as well as good karma are guaranteed.