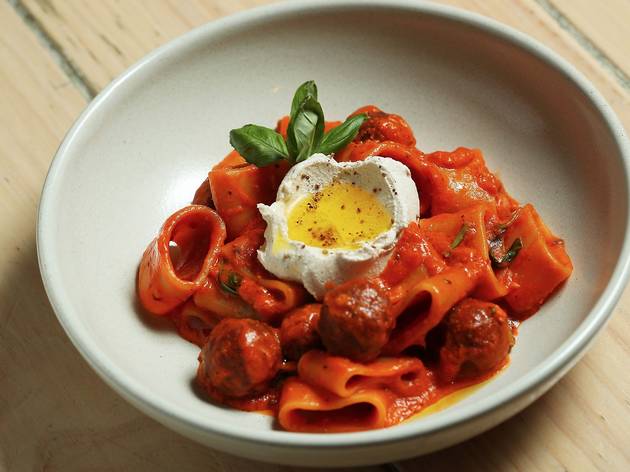 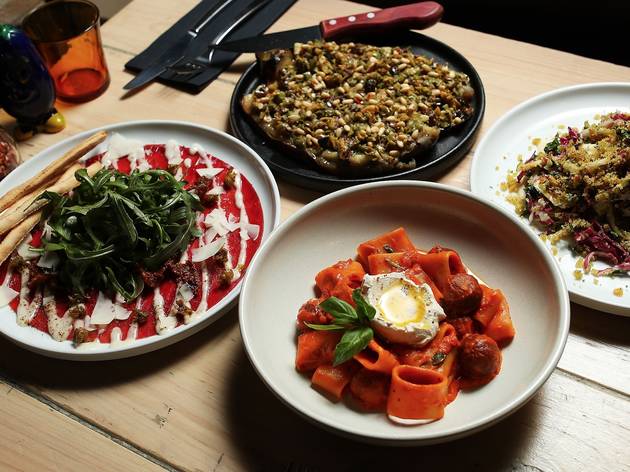 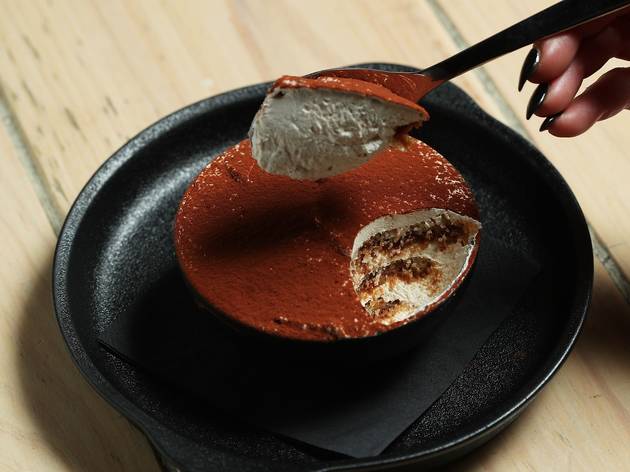 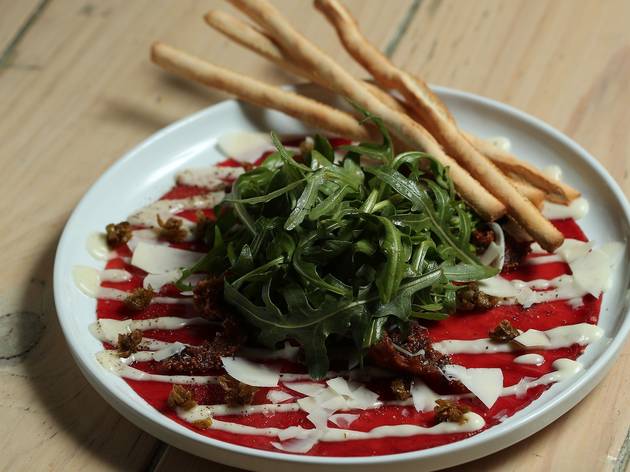 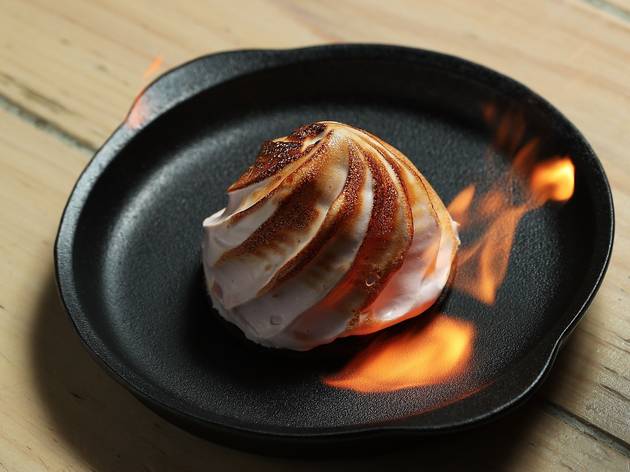 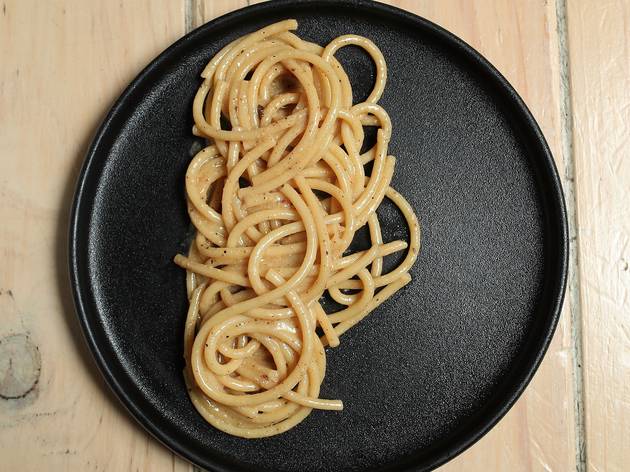 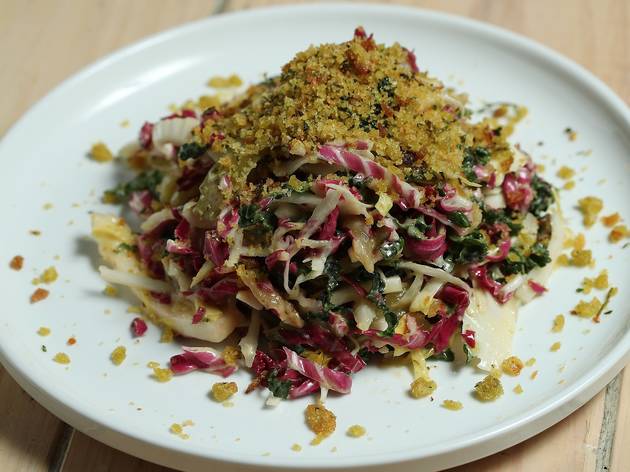 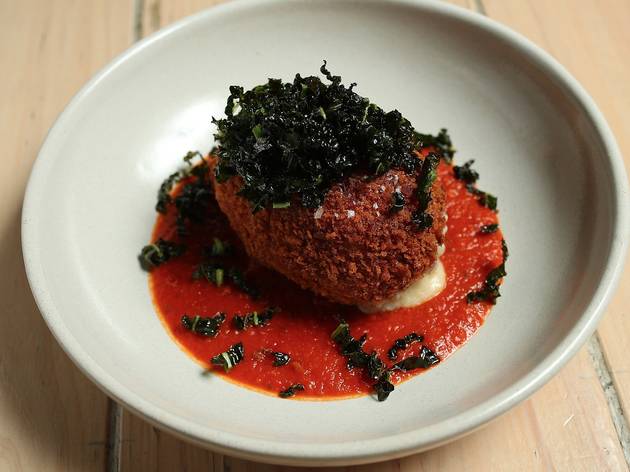 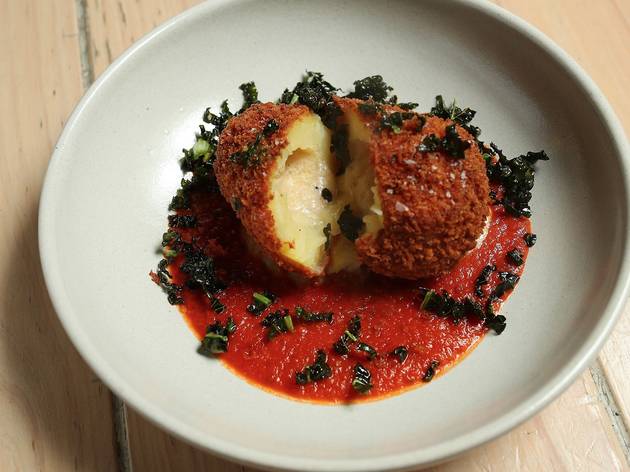 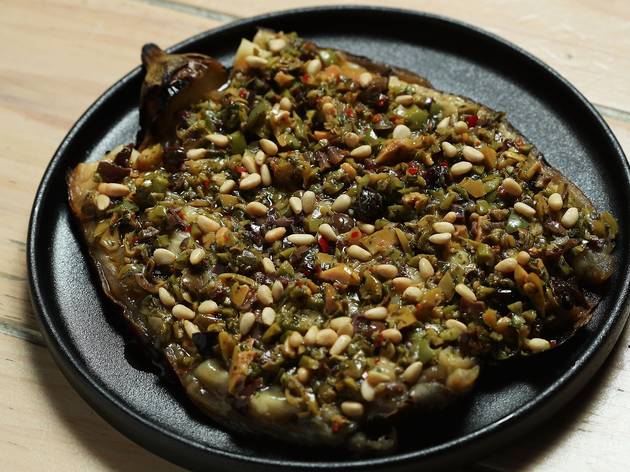 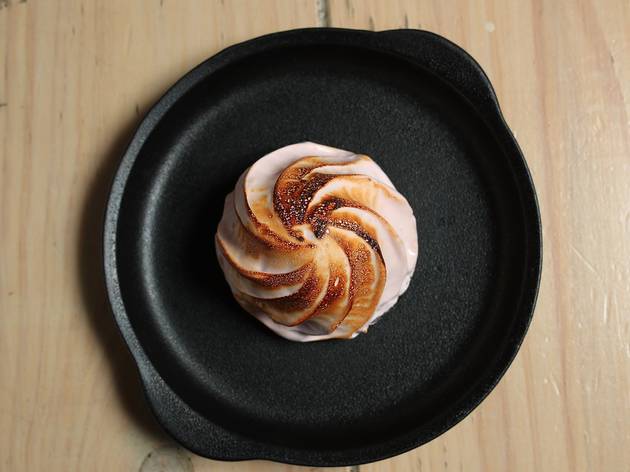 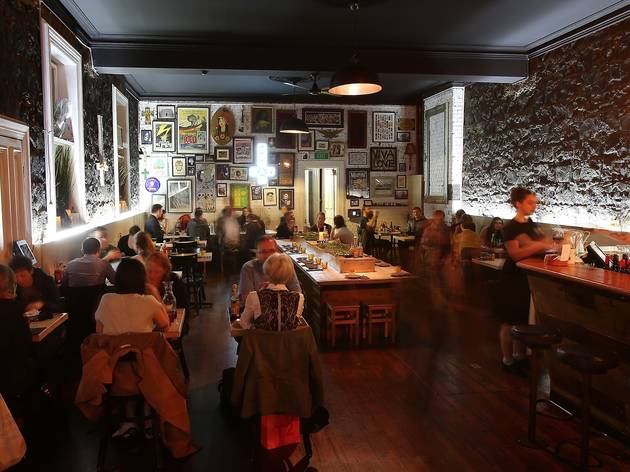 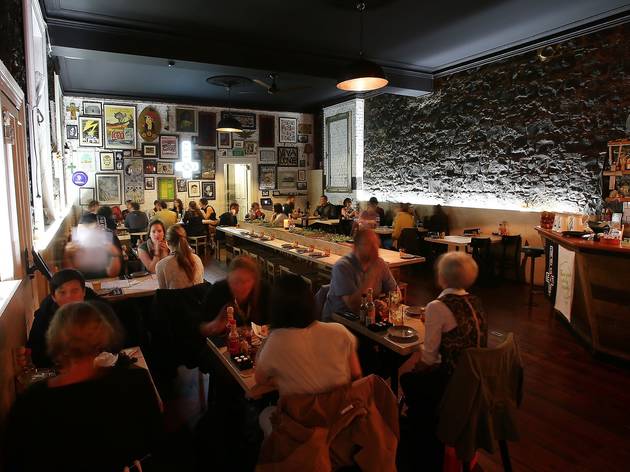 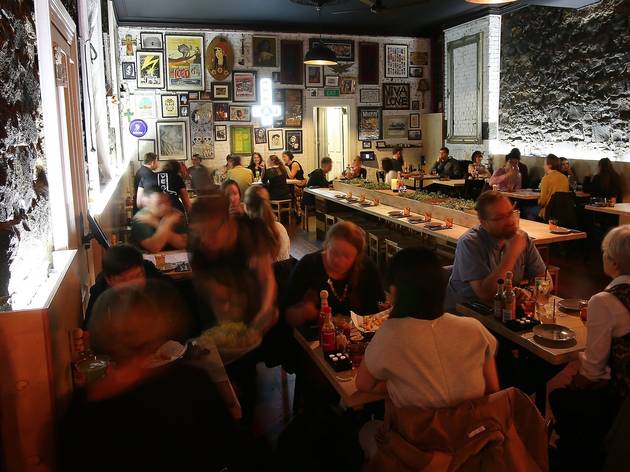 Fitzroy’s Smith & Daughters looks like an old-school rock’n’roll bar, but the cross-shaped neon sign on the wall tells you why you’re really here: to ‘eat vegan’.

In these days of fake news, fake meat and fake dairy, eating ethically doesn’t mean your only friends are salad. Abattoirs might soon become obsolete with Silicon Valley start-ups figuring out how to grow our food in labs. But if this all sounds a little too sci-fi, just wait till you hear what Shannon Martinez is achieving in her compact kitchen.

Martinez opened Smith & Daughters with business partner Mo Wyse in 2014. Aiming to dispel the myth that vegan cuisine is lacklustre, they started with a Latin-tinged menu, but did a switcheroo to Italian in May. A great move – who doesn’t love pasta – but how on earth are they going to pull off cured meats and buffalo mozzarella using just plants?

Diehard curd lovers: prepare to be impressed. The creamy, slightly sweet ricotta smeared on the pizza fritte is made in-house exactly like dairy milk ricotta but using soy milk instead. Sharp, fruity parmesan, a product from Greece, replaces the real thing in many dishes, but is especially pronounced in the cacio e pepe, where thick bucatini noodles are made piquant with loads of Kampot pepper and sticky from black fermented garlic, delivering a strong umami hit despite the non-dairy cheese.

A little poetic faith is required to fully embrace the ‘meat’. The mushroom, eggplant, dried tomato and olive mixture that mimics ‘Nduja on the pizze fritte is moreish, but missing the fiery hit of the spreadable pork salumi. The carpaccio arrives looking the part – squinting and low lighting help – with the soft, pink paper-thin ‘meat’ (points for taste but not so much for texture) crowned with lashings of parmesan, rivulets of bitey horseradish cream, fried capers adding mustardy tang, figs for sweetness, and a mountain of peppery rocket. Raw beef carpaccio this ain’t, but the parts work so well together that the fantasy holds up.

Martinez likewise nails the elements in the ragu using a traditional recipe but substituting oxtail with mushrooms that have been dried, shredded and compressed. Sure you can taste the mushrooms, but with vegan butter adding meat-like sheen and carrot and celery delivering sweetness and depth, she pulls off the slow-cooked, broth-dense flavour and silky texture. Lose a point for the sticky polenta underneath that doesn’t quite get the consistency right.

Another upside to veganism is that you can fit more in (read: dessert). Italians will swear you can’t make sabayon, a kind of custard, without eggs, but Martinez does a bang-up job of it in the tiramisu using a sulphuric salt egg yolk substitute. Spiked with the fortified wine Marsala, it’s folded though a fluffy, soy-based whipped cream, with house-made savoiardi biscuits soaked in espresso and whispers of strega and amaretto completing the most indulgent vegan dessert you’ll ever eat. Or try the Baked Vesuvius – their take on a Bombe Alaska – in which aquafaba whipped into a meringue is torched at your table for maximum theatrics. If vegan food means we can still have our cream and eat our charcuterie too, consider us converts.