Slice Shop Pizza’s storefront, with a rudimentary red, white and blue signage recalling its home team, the Footscray Bulldogs, is nothing to look at, but the bold font spelling out ‘Slice Shop’ and ‘Pizza’ make it clear what people flock here for: 18-inch pizzas by the slice, with slices a steal at $5.

Burn City Smokers co-owners Steve Kimonides and Raphael Guthrie have swapped wood-smoked meat for enormous hand-tossed pizzas in their latest venture, inspired by the famous New York slices, which are eaten on the go while folded in half. Kimonides and Guthrie resourcefully assembled the shop using offcut materials – a few terrazzo tiles were obtained from Kimonides’s home bathroom renovations, the three-metre marble top was the byproduct of another house renovation, and the butcher’s block was lying around Burn City Smokers for a few years before finding its rightful home at Slice Shop.

Head chef Tano Pennino developed the pizza bases over a few weeks, careful to ensure the slices don’t lose their structural integrity when folded. Slice Shop is predominantly designed to cater for take away, but there are a few bench seats for those who want to scoff a slice in store.

Slice Shop Pizza’s margherita has a thick, crunchy crust and a base so thin and pliable that we’re forced to bend it in half to prevent it from drooping. The result is a double concentration of fluffy dough, crafted from a sourdough starter and tipo 00 flour that undergoes a three-day fermentation period, with a napoli base that teems with notes of oregano and the faint acidity of tinned Italian tomatoes, plus a good cheese-pull from the exquisitely melted mozzarella. Add discs of salami to this and we have Slice Shop’s spicy pepperoni pizza.

Burn City Smokers is famous for its barbecued meats, which occasionally make an appearance on the daily specials, but the vegetarian pizzas are what we’d come back to Slice Shop Pizza for. The thyme in the truffle oil drizzled all over the porcini and field mushroom pizza offsets the characteristic earthiness of the widely proclaimed ‘meat of the vegetable world’. The sturdier base of this pizza and many of the others, bolstered by thicker dough and more mozzarella, means we don’t have to fold this one in half.

Slice Shop also has a four-cheese and zucchini pizza on its seven-pizza fixed menu. It’s also conscious of its vegan diners, though these pies must be ordered as a whole rather than by the slice.

Scribbled on the white terrazzo tiles of the display counter are the daily specials. The carbonara pizza is routinely featured due to popular demand, but push expectations of freakish piles of spaghetti on dough aside. Slice Shop’s carbonara pizza borrows the best parts of its Roman pasta counterpart – salty pancetta, eggs and mozzarella – and spreads it across the same base. This slice is worth sharing between two – the first few bites are indulgent in the best way possible, but the cheese-based topping solidifies once cool and the sprinkling of pepper does naught to cut through its richness.

Kimonides and Guthrie were spurred on to open Slice Shop Pizza to complement the plethora of new late-night watering holes without kitchens in Footscray. To make the best use of the Slice Shop, nab a spot at the perennially crowded Mr West, saunter across the road and order as many slices as your stomach can handle. You’ll be handed a tray loaded up with steaming pizza to take back to accompany your drink. After a sensible amount of time, the staff at Slice Shop will collect the tray to load up with pizza for the next person. Get on board with the cross-street catering, because there aren’t many things better than a pint of beer and a slice of pizza blanketed in impossibly stretchy, melted mozzarella. 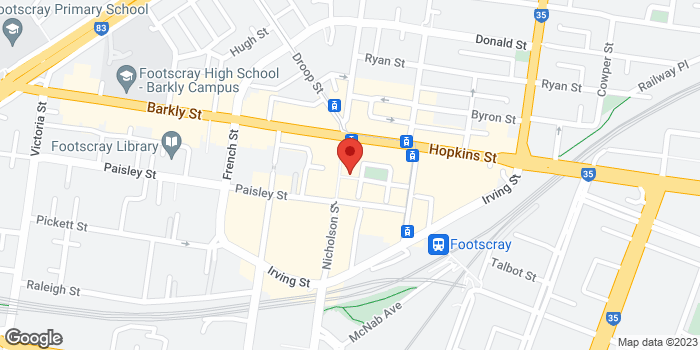