It was during the 1980s when some genius in Taiwan invented bubble tea by adding tapioca balls or ‘pearls’ to flavoured tea. People went wild for it. Bubble tea rapidly spread to other East and Southeast Asian countries before the West caught up. Bubble tea is now used as a catch-all term for (mainly) East Asian drinks that you can customise by choosing a base, tweaking your desired ice and sugar levels, adding toppings, and sipping it all up through a wide straw.

Bases can be fresh tea, milk tea, flavoured milk, fruit tea, and cheese tea (tea with a cream cheese foam layer on the top). Toppings include pearls, sago, jelly, custard pudding and foams. It’s mostly consumed cold but there are some options that are served hot, and many shops display a list of popular combos to make ordering easy for the overwhelmed or indecisive. Basically, bubble tea is a choose-your-own-adventure that’s delicious and fun to drink. Melbourne is in the midst of a tea-shop boom, but these are our top picks to get you well acquainted with bubble tea.

Prefer a brew? These are Melbourne's top spots for a coffee. And if you need something to eat on the run, why not opt for one the best cheap eats in Melbourne. You can even get snacking after hours with the best late-night eats this city has to offer. 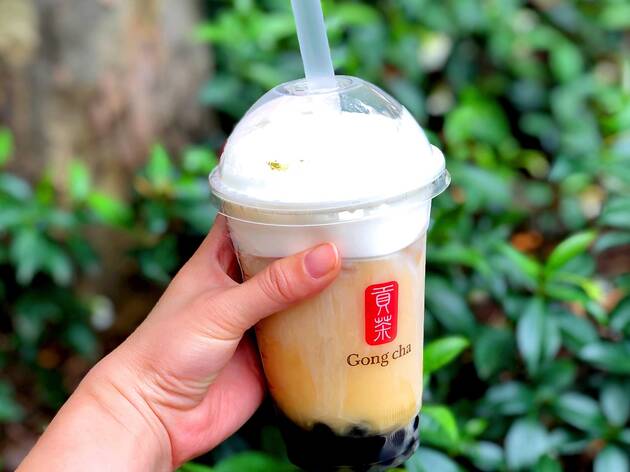 Founded in Taiwan in 2006, Gong Cha was one of the first major bubble tea shops in Melbourne alongside the likes of Bubble Cup, EasyWay, Chatime and CoCo, and is one of the most commonly found franchises in the city. Their menu is broken up into categories like signature, brewed tea, health tea, milk tea, creative mix, yoghurt series, and smoothie series, and it’s this variety, coupled with reasonable prices, quality, consistency and various locations that makes them many people’s first choice. They’re the great all-rounder. Gong Cha’s most popular drink is one of their signature teas, Milk Foam Green Tea. The green tea is medium strength, making it very accessible to most palates, and the milk foam sits atop the tea and adds a touch of creamy sweetness. You can keep the milk foam separate or mix it in. It’s refreshing on a hot day and good as is, but consider adding pleasantly chewy black pearls, white pearls with a firm jelly-like texture, or herbal ai-yu (fig) jelly. If you love a loyalty card, Gong Cha has a digital one you can keep in your phone’s wallet app. You’ll find Gong Cha scattered throughout the CBD (often next to a Hot Star Large Fried Chicken stall – try the fried mushrooms!), as well as in Springvale, Chadstone, Footscray, St Albans and Richmond. 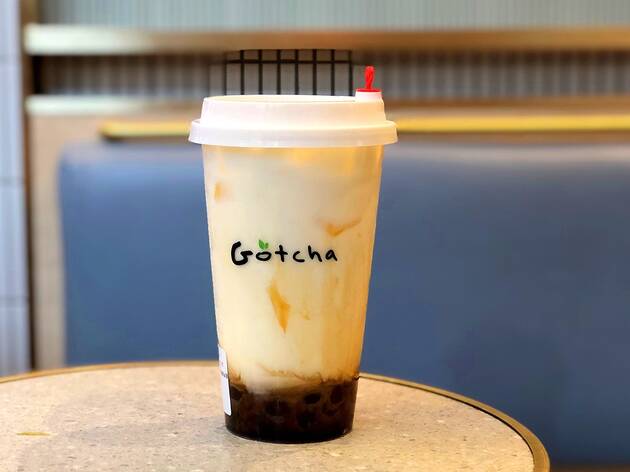 Gotcha is relatively new in Melbourne, first opening in June 2018. They stand apart from other bubble tea shops for several reasons: they farm their own tea from Alishan Mountain in Taiwan; they sell their own brand of reusable bottles, which get you free toppings when you use them; and their menu features a fair few flavours you won’t find at any other shop – we're talking salted egg cheese topping and a selection of ‘collagen’ teas (apparently great for your skin). Gotcha’s most popular drink is actually not tea at all, it’s black sugar fresh milk (very similar to brown sugar pearl milk on other shops’ menus). This is one of the newest bubble tea trends: fresh milk, with a black/brown sugar syrup, and golden/brown pearls. It tastes wickedly good and the way the dark sugar swirls into the milk is mesmerising. Gotcha’s golden pearls are wondrously soft, almost like a literal bubble, and surprisingly it’s not overly sweet (even at standard sugar level, once the ice melts a little) – imagine a more sophisticated caramel milk. If you’re the kind of person who loves to do it for the ‘gram, Gotcha’s drinks are not only insta-worthy, their shop aesthetic is too: think millennial pink, terrazzo and sleek lighting with brass fixtures. Just don’t expect to be able to find a seat – there’s barely any to begin with and it’s generally busy. Gotcha currently has two shops in the CBD as well as in Springvale, Keysborough, Glen Waverley and Footscray. 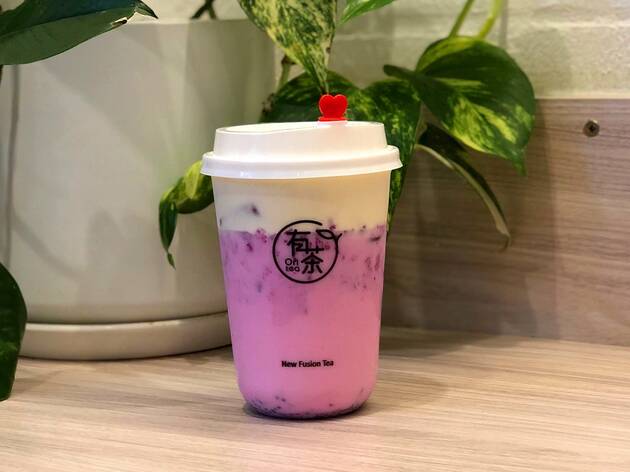 If you’ve been hesitant to try cheese tea, take the plunge at Ori Tea. Their light, creamy layer of ‘cheese’ (more like a fluffy cream cheese or mousse) is the perfect balance of sweet and salty to complement an ice-blended fruit tea. You can also get fresh fruit teas and a couple of milk teas here. If you like your flavours lighter and more natural, Ori Tea is the go, especially the dragonfruit milk tea with cheese foam (you can suck the chunks of dragonfruit up through your straw). Ori Tea also boasts a different look to most other bubble tea shops – it’s got chill, minimalistic café vibes, white interiors, light timber furnishings and a communal table with a tree growing through the middle of it. Get 100% ice if you like your drink cold, and the sugar levels are comparatively low here so if you like your drinks sweet opt for 100% sugar. They also sell a luscious-looking crepe cake if you would like a solid treat with your tea. 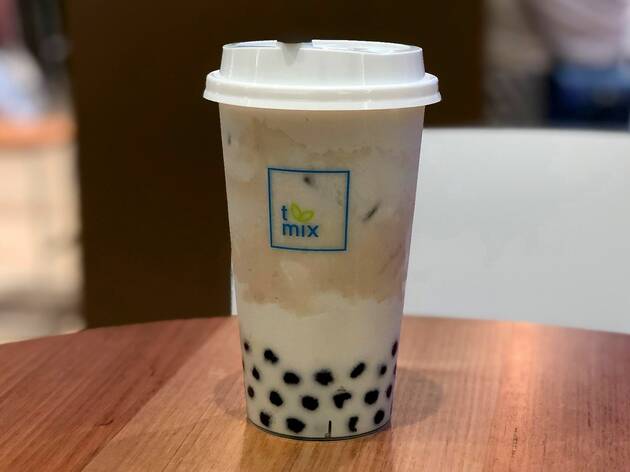 Order the: Taro latte with pearls

Tmix is another new player in the Emporium Shopping Centre. Their informative menu is split into milk tea, fruit tea, fruit chiller with cream cheese, blended ice drinks, and cheese tea. Sometimes pearls are included in the base price of the drink so you don’t have to pay extra – it pays to read through the ingredients of each one. They also do coffee and doughnuts in exciting flavours like Thai milk tea, black forest, pandan coconut, matcha, and popcorn caramel. A classic yet left-of-centre order any bubble tea lover has to try at least once is the taro milk tea or latte. Taro is a root vegetable, most often purple in colour and used in various Asian dishes and desserts. The texture is kind of starchy, similar to potato, and the unique taste isn’t comparable to anything else but is reminiscent of vanilla, nuts, sweet potato and flowers (it contains multitudes). At Tmix, the taro latte is consistently in the top five most popular drinks, and comes with pearls. It’s made with taro paste/puree and fresh milk and the results are like a thickshake in texture. Tmix’s pearls are excellent, similar to Gong Cha’s but perhaps a tad softer and sweeter. There’s a little more seating here than most bubble tea shops, but if it’s packed you can just wander around the corner to the Café Court and its plentiful seating spaces. 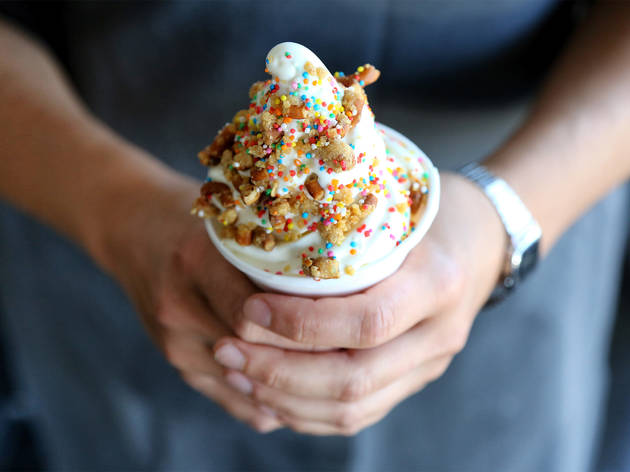 Nothing beats a scoop (or three) of ice cream or gelato for dessert, but not all frozen desserts are created equal. We've licked and scooped our way across the city in search of Melbourne's best cone artists.