Our theatre critics spend a scary amount of time sitting in dark rooms, so they usually know what's what when it comes to Melbourne's stages. Here are all their tips for the best shows to see right now, as well as the upcoming shows that we haven't seen yet, but think are going to set your heart racing.

For more Melbourne theatre information, check out our latest reviews and our guide to scoring cheap theatre tickets. 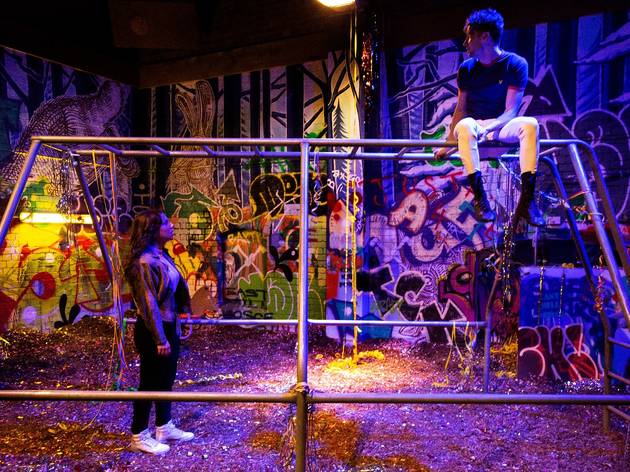 There’s been a lot of hype about Because the Night, Malthouse Theatre’s new production where the audience can freely explore an immersive set while the cast perform around them. “Immersive” really is the word here, and for once the oft overused term doesn’t feel like a gimmick – nor does the intensely detailed open set undermine the integrity of the production. Because the Night is undeniably a work of theatre, but one that approaches the art with a bolt of inspiration that will attract new audiences to the discipline.  It’s apparent from the get go that Because the Night is unlike any production Australian audiences have seen before. The audience are split into three groups, each entering the performance from a different location. Ushers provide each person with a dark robe and Donnie Darko-style black rabbit mask to cover their face – apart from serving to differentiate audience from cast, the costume immediately puts visitors in the right headspace; goodbye Melbourne, hello Elsinore.  If you’ve seen Melbourne’s 2019 season of A Midnight Visit or even been lucky enough to attend Punch Drunk’s Sleep No More in New York, you’ll get the drill. The cast of six – which when we attended was Keegan Joyce (Hamlet), Nicole Nabout (Claudia), Syd Brisbane (Polonius), Ras-Samuel Welda’abzgi (Laertes), Jen Vuletic (Gertrude) and Artemis Ioannides (Ophelia) – are oblivious to the audience as they perform the loosely Hamlet-based story across the winding, labyrinthine set of Elsinore, a 1 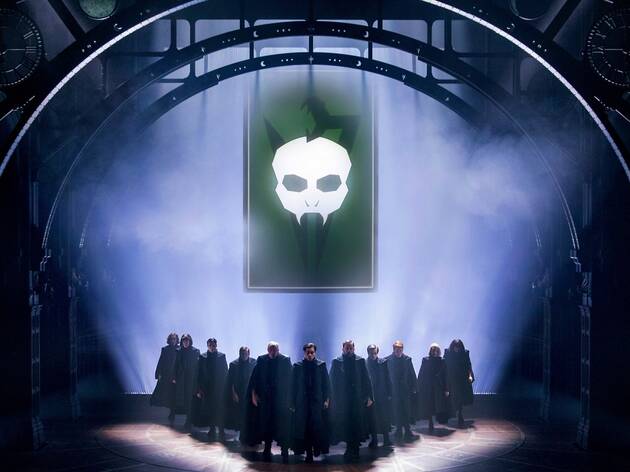 The first rule of Harry Potter and the Cursed Child is that you don’t talk about Harry Potter and the Cursed Child. Safeguarding spoilers is an expected responsibility for anyone who attends the Potter-verse’s first on-stage outing. There’s even a hashtag: #KeepTheSecrets. But in truth (as far as theatre critique is concerned, at least), JK Rowling needn’t have worried. This marathon, five-hour spectacle has a plot so dense and sprawling, so wonderfully, unashamedly elaborate, it would take many thousands of words more than any theatre review to even scratch the surface. While we may have been sworn to secrecy about Cursed Child’s plot, we can reveal that the hype – and rarely has a piece of theatre ever generated such fever-pitched buzz – is entirely deserved. And not just because of the quality of the production. The masterminds behind the show – led by Rowling, playwright Jack Thorne and director John Tiffany – have not merely set out to put on a play, but rather craft a rich and detailed immersive experience. To this end, Melbourne’s Princess Theatre has undergone a top to bottom $6.5 million makeover, transforming its interiors to match a Hogwartsian, Potterfied aesthetic. If this sounds like an unnecessary extravagance, it’s probably an indication this play isn’t for you. The success of Cursed Child, which has smashed box office records on Broadway and the West End, is powered by its unapologetic exclusivity. Those without any prior knowledge of Harry and co will be baf 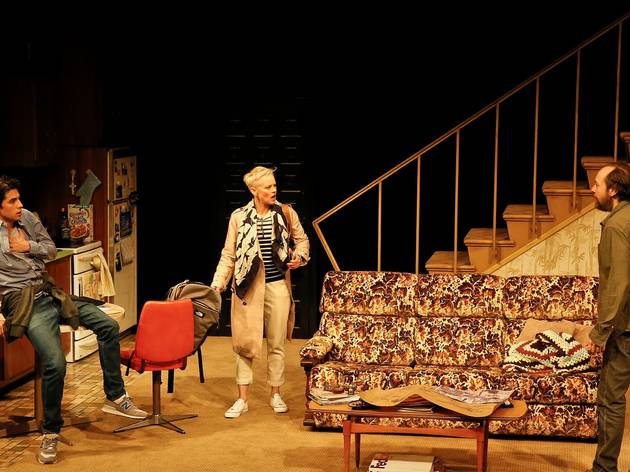 When American citizens stormed their seat of government on the false basis that the election was stolen – fake news espoused by a former president who shall remain nameless – it was the terrifying result of four years of bending the truth totally out of shape to fit his malign purposes. All of which makes the long-delayed arrival of gloriously word nerdy Broadway show The Lifespan of a Fact in Melbourne particularly timely. Based on a true story that was, in itself, based on a lie (lots of lies), it absolutely backs up the old adage that the truth is stranger than fiction. Not that this show is quite on the same scale of horror as that botched and bloody coup, but it nevertheless probes the same smudgily blurred lines. It’s complicated, but the gist is this: effervescent, physically expressive actor Karl Richmond plays young cub sub-editor Jim Fingal. He’s tasked by his editor Emily Penrose (Nadine Garner) to do a basic fact check on a major feature for their magazine by star writer John D’Agata (Steve Mouzakis). D'Agata's feature is a great yarn that gets to the nub of human mortality, hooked on the tragic suicide of a teenager in Las Vegas. It's been picked to replace a boring one about congressional spouses, but Emily cautions Jim that John has been known to take occasional liberties. Setting about the task with gusto, an uber-persnickety Jim is shocked to discover just how many liberties. The more he picks at the wild inaccuracies, the more he uncovers. When he queries Jo 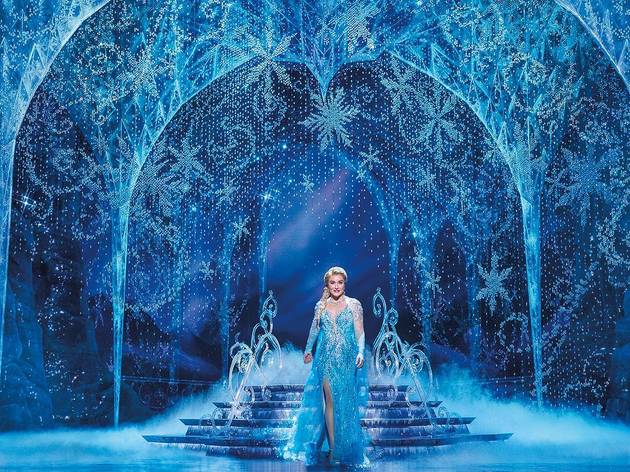 Arriving just in time for Christmas in July, Disney’s smash hit Broadway musical Frozen is swooshing in from Sydney to make Melbourne as frosty as Arendelle. Icing up Her Majesty’s Theatre this June with whizz-bang tricks and astounding puppets in the mix, this spectacular stage adaptation features all the beloved songs ready for excited sing-alongs plus brand-new tunes from original songwriters Kristen Anderson-Lopez and Robert Lopez. The magnificent Jemma Rix, who was so spectacular as Elphaba in Wicked, takes on another enchanted role as the magically cursed Elsa, doomed to go it alone in her icy palace, whistling down the wind while belting out irrepressible earworm  ‘Let it Go’. SIX the Musical star Courtney Monsma plays her awkward estranged sister Anna, with Jersey Boys lead Thomas McGuane as Prince Hans, Sean Sinclair as the kind Kristoff and Jonathan MacMillan and Lachlan McIntyre sharing the role of reindeer herder Sven. Matt Lee (Mary Poppins) get the best gig in show as adorkably goofy snowman Olaf. Sydney editor Maxim Boon said of that city’s production: “In all the ways that matter most to a live performance – the sincerity of the portrayals, the power of the singing, the emotional depth of the relationships – Frozen does exactly what it sets out to do: it melts our hearts.” If the thought of sitting font row gives you chills, grab your tickets for Frozen right now. Tickets are available from $49.50. Here's what goes into bringing a hit musical like Disney's 'Fr 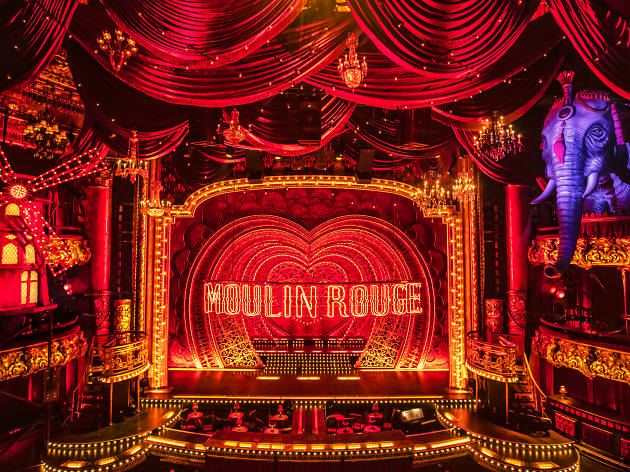 Do you believe in freedom, beauty, truth and love? Yes? Good. A spectacular stage version of Moulin Rouge! wings its way to the Regent Theatre this winter for its Australian premiere.  The stage version is closely based on the film and features (almost) all of the songs you know and love, including 'Lady Marmalade', 'Come What May', 'Your Song' and a whole new version of the 'Elephant Love Medley'. There are also a whole bunch of songs in there that were released in the years following the film's 2001 release date (for example, Katy Perry's 'Firework' is in place of 'One Day I'll Fly Away'). The show has been getting rave reviews. Time Out New York said, in a four-star review: "Moulin Rouge! may turn out to be the jukebox musical to end all jukebox musicals – if only because, among its particular type of jukebox musical at least, it’s hard to imagine how it can be topped." Alongside the choreography, direction and impressive song list, critics have been particularly dazzled by the set design, which has transformed Broadway's Al Hirschfeld Theatre into a slice of Paris at the turn of the century. It's set to do the same at the Regent. The local prodution has now announced its cast, which is led by Alinta Chidzey (Chicago, West Side Story) as Satine and the relatively new Des Flanagan as Christian. The role of Moulin Rouge proprietor, Harold Zidler, will be filled by Simon Burke while the villainous Duke of Monroth is played by Andrew Cook. The artists Toulouse-Lautrec and Sant 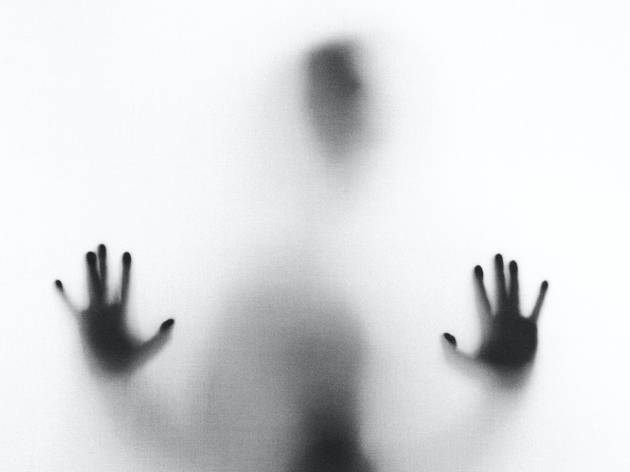 Spooky things are happening on stage. The lighting is dim, and you peer through the gloom. There at the back, is that... alive? Did it used to be? Then the lights go out, and the theatre is plunged into darkness. But it's only a play, isn't it? Nothing can get you while you're safe in your seat, right? Right? This is Ghost Stories, a British horror-themed play written by Jeremy Dyson (The League of Gentlemen) and Andy Nyman (Derren Brown TV and live shows, Peaky Blinders) that has played in London for many years, including in the West End.  The producers are keeping their spooky surprises a secret, but there will be scares aplenty during the five-week season of Ghost Stories at the Athenaeum. This is the first time the West End version has come to Australia, though other iterations of the show have visited our shores in the past. “You haven’t experienced horror until you’ve seen it live on stage,” says Nathan Alexander, producer at Realscape Productions, which is presenting the Australian version. “The show is thrilling, chilling and we couldn’t be more excited for Australia to experience the rollercoaster that is Ghost Stories.”  Will there be jump scares? Based on the trailer on the website, almost certainly. Will there be creeps, crawls and general bumps in the night? Most definitely. The show comes with a warning label that it's not for the faint of heart or those with nerve conditions. Fearless Melburnians can see Ghost Stories from October 5 to November 13 at the Athena 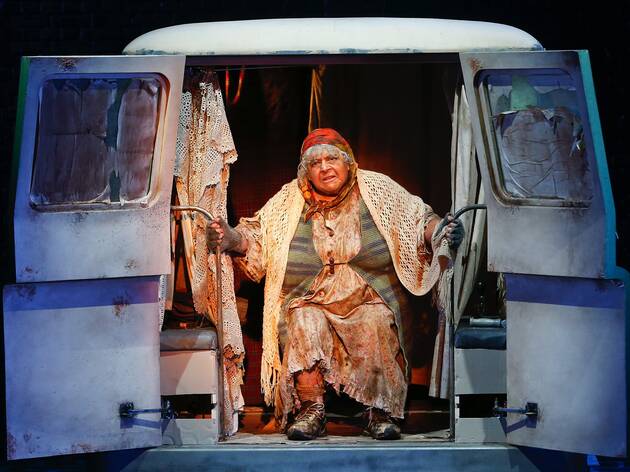 Wondering what to see in Melbourne this week? Check out our guide to the theatre, opera, musicals and dance shows on Melbourne's stages for the next seven days.