There are so many reasons to visit Daylesford that it's surprising that most of us aren't there every weekend. There are the spas, of course; but then there are also contemplative art galleries, heritage train rides and a museum that tells the stories of the Dja Dja Wurrung people who are the traditional owners of the land.

According to advice from the Department of Health, Victorians are currently only allowed to travel for day trips only. From June 1, overnight stays will be allowed across regional Victoria, cultural venues will be permitted to reopen and restaurants and cafés can offer dine-in service. Some restrictions apply and physical distancing measures remain in place. Check with individual venues for specific opening details.

Where to eat and drink 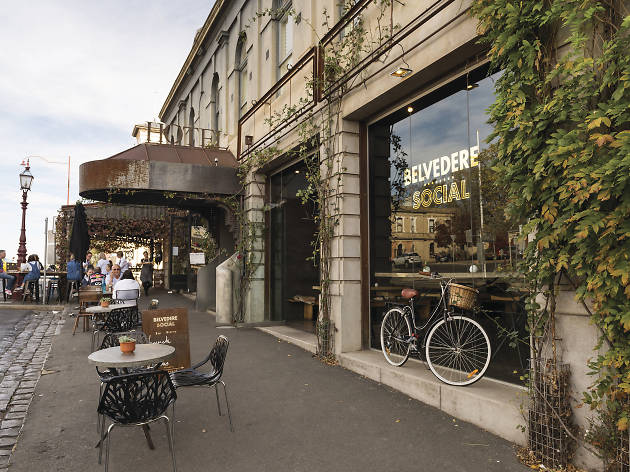 Many a long lunch has turned into a lost afternoon in the Belvedere’s viney courtyard, and many a quick pit stop has fallen foul of the charcuterie board. There’s a hint of the 1960s in the casual fit-out of this 1880s building, replete with sculptural touches and with a fire roaring in the white brick hearth during winter months. The farm-to-table menu draws on local producers such as Tuki Trout Farms and Vue du Volcan Duck, and the cocktails are in collaboration with local artisan producer Natasha Morgan (such as ‘The artist formerly known as Quince'). There’s often jazz on weekend evenings, and if your visit is between Thursday and Monday, you can additionally nip next door to the Thirteen 05 gallery for a snoop. It’s run by two artists, Emma McAdam-Marmont and Struan Hopwood, with regular guest exhibitors. 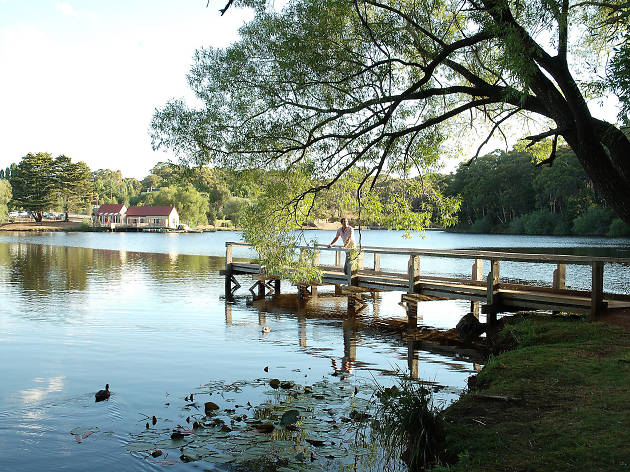 The most prominent of Daylesford’s lakes is, appropriately, named Lake Daylesford. A leisurely circuit of its perimeter – which will take in secondhand store the Book Barn and plenty of waterfowl – takes half an hour, and there are paddle boards and paddle boats for hire from the Boathouse. Conveniently, that’s a great place to eat, too – either on the deck seating or in the light-streamed dining-room. They’ve got you covered for breakfast, brunch and lunch, with mains including garlic-steamed mussels and confit duck. The restaurant is licensed, with a generous selection of local drops. 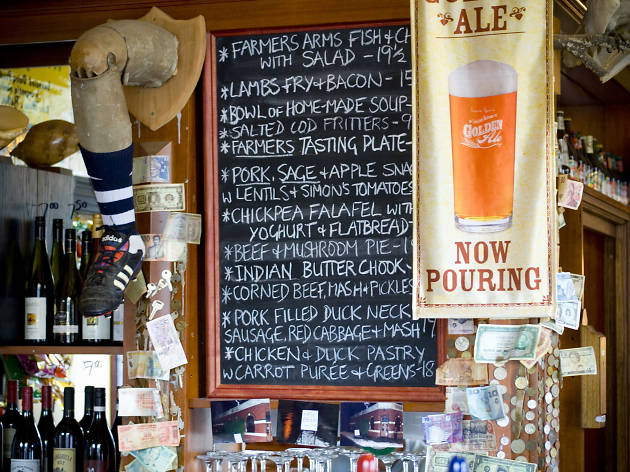 This charming hotel, the oldest in Daylesford, expertly plays two roles: local boozer and destination pub. There’s a community noticeboard in the cheerful front bar and the framed whiskers of local chaps who’ve undergone a shave for Movember. Out back there’s a large, elegant dining room, adorned with floral arrangements, to tuck into smoked trout farfalle, venison ragu and Farmers Arms Draught beer-buttered gummy shark. There’s so much room in this joint that there’s even a room or two just for the pub grubbers picking off the bar menu. A massive wine list and local delicacies such as Castlemaine Red Ale and Daylesford IPA on tap. 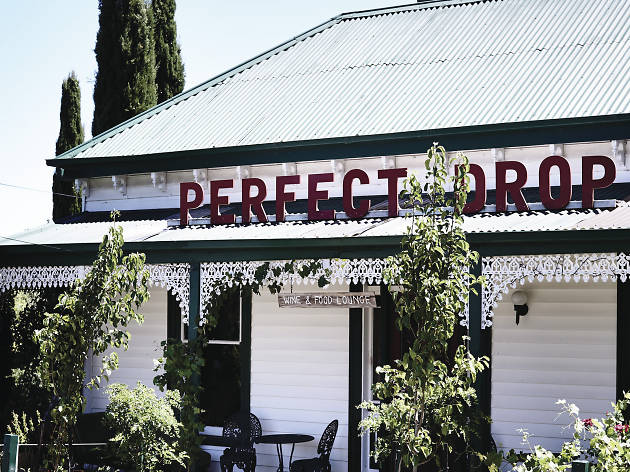 Like moths to a flame, visitors are drawn to the Victorian verandah of The Perfect Drop, to spend an evening under the grapevines. Inside, the three parlours have a relaxed feel, with candles, flowers and antique lamps throughout. Hatted chef Hugh Maxwell (formerly of Bendigo's Dispensary Enoteca) specialises in contemporary fine dining, using bountiful local produce. The menu is limited to four options per course, or splash out on a five- to seven-course degustation. Happy Hour is from 4-6pm daily, with $12 cocktails and $2 oysters, and there’s live music in the bar on weekends. 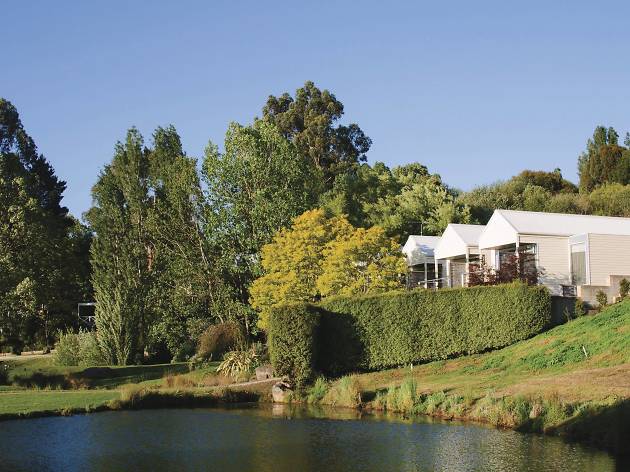 Imagine watching the mist rise from Lake Daylesford as you enjoy a morning tea on your balcony. The Lake House does tranquility exceptionally, being a sprawling property with private courtyards and many gardens to explore. Its co-owner, Allan Wolf-Tasker, is a renowned artist who has a studio on site that’s open by appointment, and there are paintings and sculptures throughout the grounds. Those who want to relax will find solace in the Salus Spa, surrounded by waterfall-fed streams, while the more active will enjoy a hit on the courts (and then a drink in the pavilion). For really polished privacy you can stay in The Retreat – a discrete country house within the grounds. The two-hatted restaurant, steered by culinary director Alla Wolf Tasker and executive chef David Green, creates feasts from the bounty of local producers, and can brag a wine list of more than 1000 varieties. You can even enroll in the purpose-built cooking school, which regularly features guest chefs, such as Andrew McConnell. 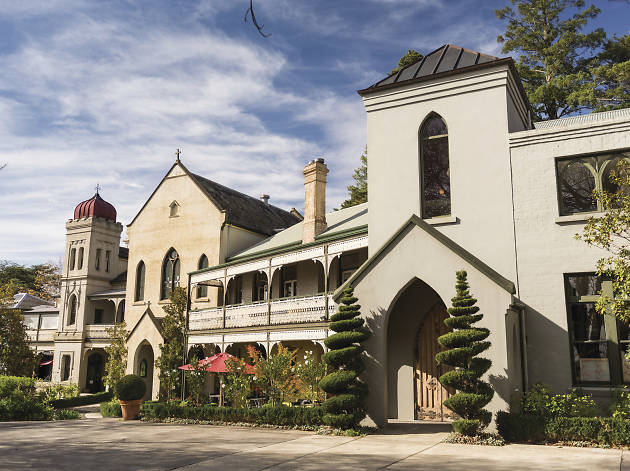 The Convent
It takes so long to explore the convent that you’ll even be handed directions that advise you where to go and in what order. Built in the 1860s during the gold rush, it’s now home to multiple touring exhibitions and old artefacts, from the bell tower right down to the basement. Actually, a local artist, Tina Banitska, had bought the property in 1988 after the last nuns moved out in the ’70s. A stroll around the carefully cultivated grounds is a must (particularly if you like begonias), as is a morning stint in the Bad Habits café, which serves everything from high tea (which must be booked) to mulled wine.

Sunday Market and Heritage Train Rides
Every Sunday a sprawling market that’s part flea, part produce, part clothing, sets up alongside Daylesford Railway Station. Drop in for the briefest of browses and you’re liable to walk away with a house plant, locally produced honey and… whatever that antique bit of iron is. The 1882 heritage-listed railway station is the highest-operating in Victoria, and the hour-long journey of its historic railmotor ($13-$15 return) takes in volcanic hills, dense forests, and no doubt the odd wombat. The only thing it won’t do is take you back to Melbourne.

Hepburn Springs
A mere five minutes’ drive from Daylesford is gracious Hepburn Springs – a spa town that’s risen up around the natural mineral springs. Indeed, you can either take a stroll through the bush and fill up your water bottle straight from the source, or you can splash out on one of the many hotels and day spas that will soon get you afloat (well, as soon as you’ve had a massage). There’s plenty of sustenance here, too, such as Surly Goat – a popular restaurant just off Main Road. It books out at weekends so you might need to grab a seat at the bar. The menu changes weekly, but think barramundi fillets, Black Angus rump steak and chargrilled lamb cutlets. After dinner, trek all the way down to the sulphur spring, guided by the Narnia-like green streetlamps.

Mill Markets
There really is something for everyone at these massive markets that stretch from room to room. Fans of Australiana are particularly well catered for, thanks to the vintage tea towels, postcards and kitsch tablewear, but there are also plenty of clothes to rummage for (whether you’re looking to be Steve McQueen or Amy Winehouse), lots of coins for collector buffs, and everything from ancient motorbike parts to vintage pinnies.

Daylesford Museum
Staffed by the volunteers of the Daylesford & District Historical Society, this museum is a goldmine of local history. Much of it was donated by the descendants of early settlers, so you can imagine there’s a wealth of early gold-mining relics. There are also artefacts and papers from the Loddon Aboriginal Protectorate station at nearby Franklinford, which was land loaned back to the Dja Dja Wurrung people in 1841 – before they were forcibly resettled again in 1864. For those embarking on research projects, the museum opens its archival resources to the public, even providing insight from its own team of researchers, provided an appointment is booked.

Discover more of the RCC 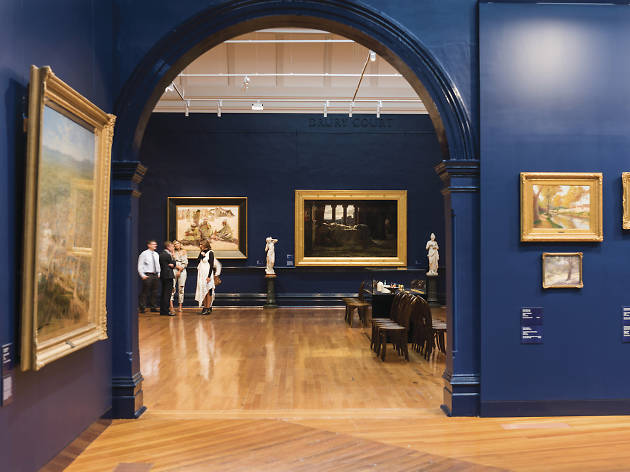 What do the four shires surrounding the buzzing Victorian centres of Bendigo, Daylesford, Castlemaine and Maryborough have in common? In 2018, they’re teaming up to form the Regional Centre for Culture. Over 12 big months, the RCC will host music festivals, shows, exhibitions and community events. For a comprehensive look at where to go, stay and eat, check out our guide to the RCC.