The stats from our City Life Index survey are here! See what locals love, hate and grudgingly tolerate about life in NYC.

New York is the greatest city in the world. For our money, that fact is set in stone. But because we’re biased (and, fine, a little smug), we asked people from 32 Time Out cities across the globe—from Melbourne and Moscow to Los Angeles—to tell us how they really feel about where they live. More than 15,000 folks voiced opinions on their metropolis’s food scene, neighborhoods, public transportation, livability and much more. So how does NYC stack up? Turns out, compared to the rest of the world, New York is pretty great—we rank as the third best city to live in. Chicago took the top honors (agree to disagree, Second City), followed by Porto, Portugal. No matter what, we learned a whole lot about the good, the bad and the ugly of our nearly 9 million–strong hometown. (It’s not just in your head: It really does suck to date here.) Read on for more fascinating and surprising details about the city that never sleeps. (That’s true, too: 49 percent of us feel sleep-deprived right now, but we’re the best city in the world for nightlife!) Hungry for more of locals’ favorite haunts? Check out the best restaurants in NYC, best bars in NYC and the top New York attractions. 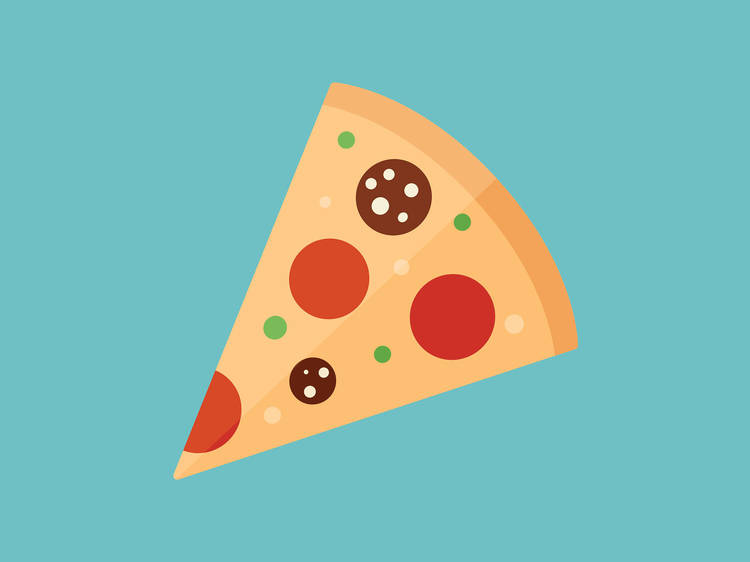 —81% of Gothamites think our city has amazing dining options, and almost three quarters of you said the same of the bar scene. No wonder you eat out an average of 41 times a year.

—We order more delivery than any other city in the world, with 62% of us having done so in the last week.

—30% of Chicagoans and 27% of New Yorkers agree: If forced to choose, pizza would be the dish they scarf every day. (We get it, Chicago: You’re devoted to deep-dish. Can we please talk about something else?)

→ New Yorkers are, of course, workhorses, so it makes sense that we eat our lunch at our desks 39 times per year, more than any other U.S. city. But that’s not because we hustle the most—we work the same hours per week on average (44) as Boston, Miami, San Francisco and Washington, D.C.

—Only 27% of New Yorkers say they'd wait more than an hour for a table. 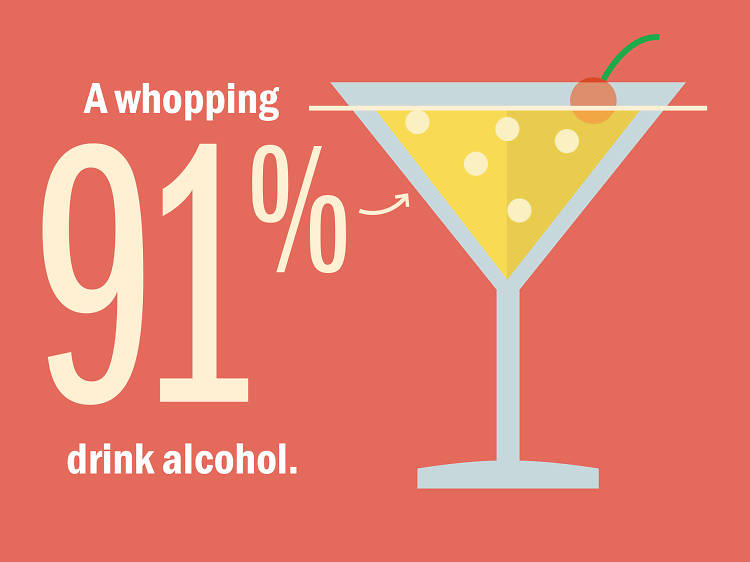 —78% of locals said NYC has great nightlife, making ours the best after-hours scene in the world. (Your move, Berlin.)

—It’s not only avocado toast that keeps us from having any savings. Our readers spend an average of $96.79 when they go out.

—Six out of ten New Yorkers say they have been to a bar in the last week. The only other city living it up as much as we are? Austin.

← 20% of New Yorkers admit to taking drugs. And those folks get high, on average, eight times per year. (This rate is second only to Miami users, who do so 11 times per year.)

—People in D.C. and Miami go clubbing more than we do, but we bet that answer would change if people in New Jersey took this survey, too. 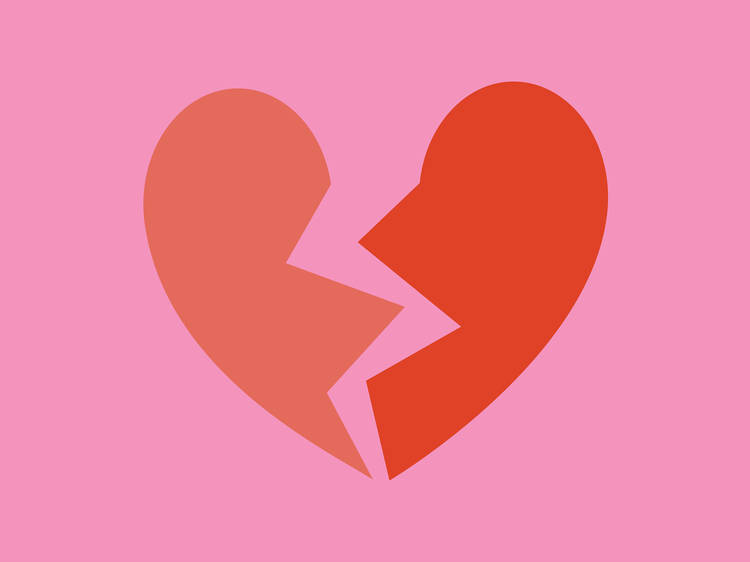 —Less than one in five of you have high hopes of finding love in the city, which makes NYC the most pessimistic daters in the country. (Forty-five percent of Chicagoans think it’s fairly easy to find love.)

—The good news? We’re still all over each other! Forty-three percent say it’s easy to have sex in NYC, and about a third of you are single. So what are you waiting for?

—21% of New Yorkers say they’ve used a dating app in the last week, and almost a third say they went on a date during that same timeframe. Gee, does that mean people are meeting IRL? Gasp!

—Thirty-two percent of New Yorkers admit to cheating, making us the most likely to cheat in the world.

→ Forty-six percent of you have ghosted someone, second only to folks in D.C.

—Tallyho! Americans think a British accent is the hottest accent of all. 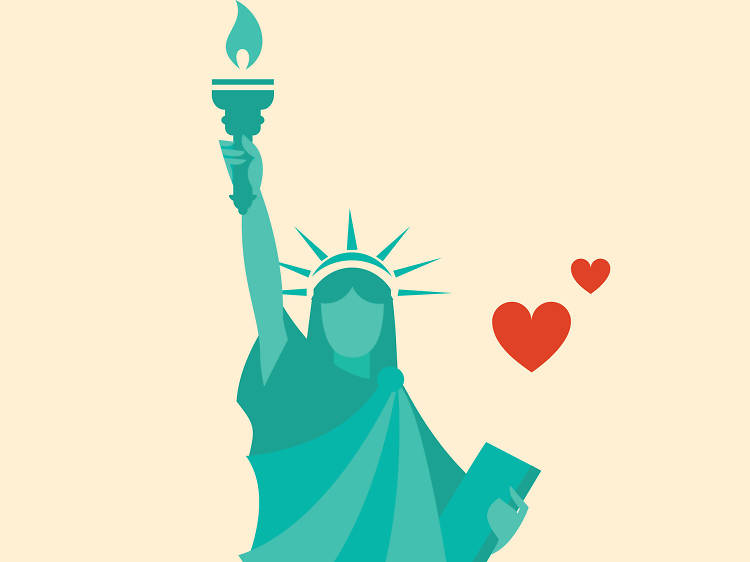 —The community in New York City is the wokest in the world. More than half of survey respondents living in NYC said they “feel free to be themselves.”

—Do you know your neighbors’ names? Believe it or not, 45% of New Yorkers do.

—91% of us feel safe walking alone at night.

—Are we brutes? New Yorkers are most likely (at 21%) to keep the cash they find in a lost wallet. (Honest folks should consider Austin, where only 9 percent of those surveyed claim they’d take the money and run.)

—Tourists drive 68% of us nuts. (Dear Mayor de Blasio, if you enact a sidewalk “slow lane ” for out-of-towners and a fast lane for us, that number would greatly decrease. Regards, the 68 Percent.)

← A whopping 77% of New Yorkers are completely stressed out.

—Only 13% of New Yorkers are happy with the transit system. (Seems a bit high, no?)

—Only 8% found it easy to make new friends in New York City. Maybe our new motto should be, “You can't sit with us.”

—About half of New Yorkers schlep around “sleep- deprived.” But if given the choice of social media or coffee, only 7% would give up their accounts. 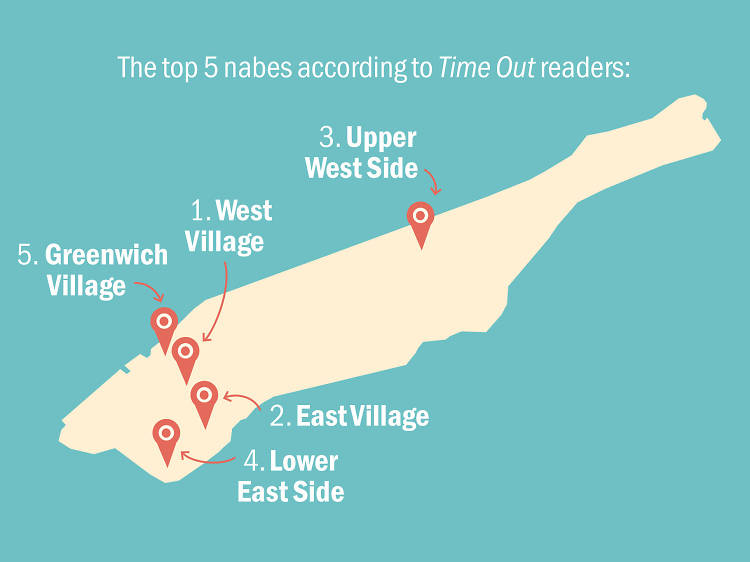 —Who says we’re grouchy? 59% of us are absolutely in love with our neighborhoods.

—The three best neighborhoods for going out are:
1. Lower East Side
2. East Village
3. West Village

—The most overrated neighborhood? Williamsburg, according to more than one fifth of New Yorkers. Ouch.

—We asked you, what stereotypes about New York City are true? Here's some of our favorite answers:
“It’s quite miserable to live here, but the rest of the country is even worse, so we’re stuck.”
“It smells.”
“We wear black.”
“Sirens all the damn time.”
“We don't give a fuck about you.”

Looking for something to do in NYC? 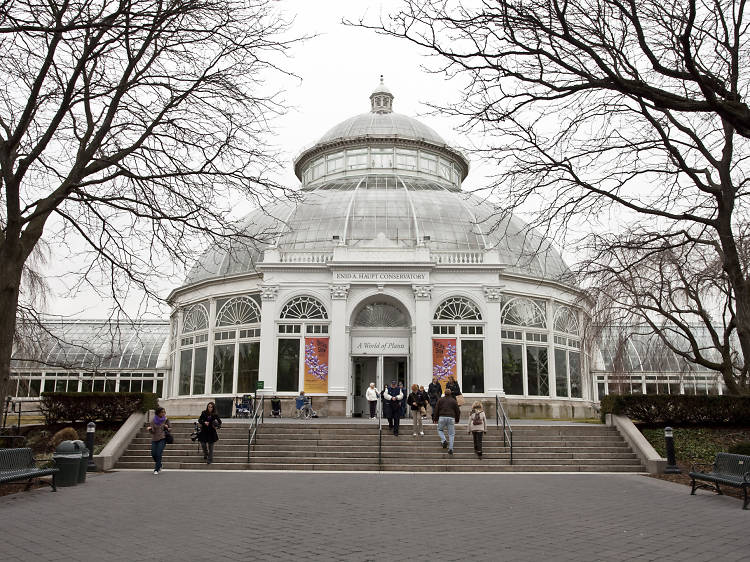