The ultimate guide to Marina Bay: restaurants, bars and things to do

The Marina Bay Sands may be the crown jewel of this area, but there's plenty to see, do, eat and drink on the waterfront

At the mention of Marina Bay, you'll most likely visualise the iconic three-towered integrated resort. And we can't blame you as the iconic Marina Bay Sands have become the poster landmark of Singapore since its opening in 2010. With the world's largest infinity pool, the luxury hotel has attracted many travellers, including megastars the Beckhams and John Mayer.

Right by the doorstep is the Shoppes at Marina Bay Sands. Feel the urge to splurge as you step into designer brands such as Chanel, Gucci and Dior, and celebrity chef restaurants like Adrift by David Myers, Bread Street Kitchen by Gordon Ramsay, and Chinoiserie by Justin Quek.

But there's more to living like a Crazy Rich Asian at Marina Bay. Beyond the towering skyscrapers, the reclaimed land is peppered with plenty of things to do, see, eat and drink. Admire the view from above at the Singapore Flyer, take a stroll down Gardens by the Bay, or fly a kite at the Marina Barrage. And when you're feeling famished, take your pick from local delights or gourmet spreads – all within the vicinity of the bay and the city skyline.

RECOMMENDED: 120 best things to do in Singapore and the ultimate guide to the Civic District 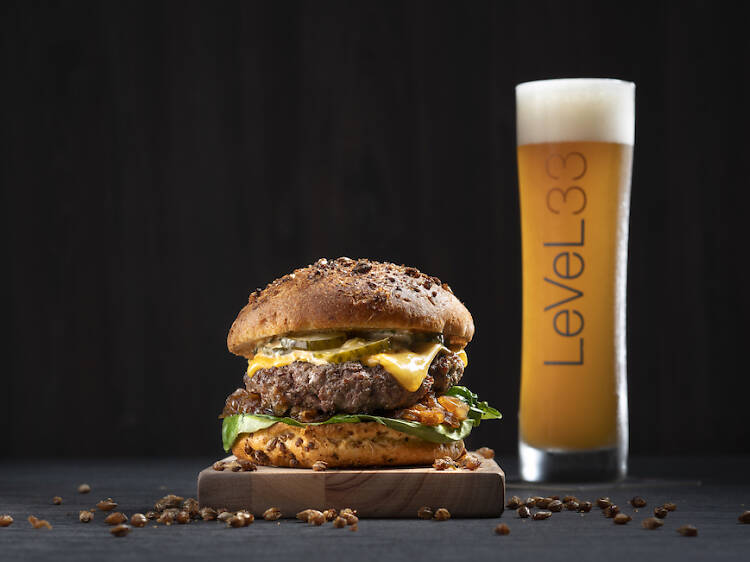 Down a pint at LeVeL33

No prizes for guessing on which floor this bar and restaurant is perched. Billed as the world’s highest microbrewery, LeVeL33 gloriously overlooks the Marina Bay, and, thanks to the decor and service, is perhaps the most sophisticated place to quaff a locally brewed beer. The craft beers brewed in-house go for $9.50 for 300ml before 8pm, then climb to $12.50 a pour after. If you're not sure what to go for, platters of five 100-millilitre samplers of LeVel33's blond lager, IPA, stout, house porter and wheat beers can be ordered at $23.50. These brews also go into beer cocktails, but if you're avoiding malt altogether, shoot for the house wines or premium vintages. 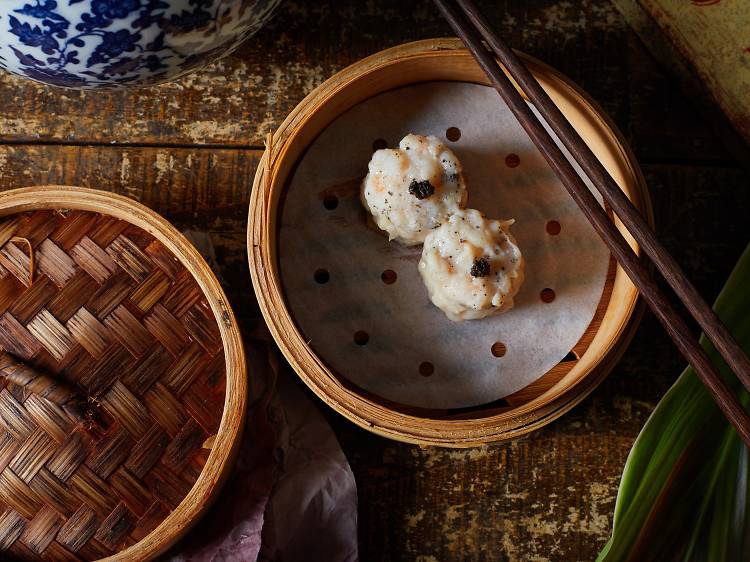 Savour the Chinese flavours at Mott 32

The restaurant is opulently decorated by starchitect Joyce Wang, who is known for her award-winning interiors. Flashes of green and botanical motifs pay homage to Singapore's rep as a city in a garden. Dishes from the kitchen capture the same dramatic flair. The usual Chinese staples are executed with premium ingredients, Mott 32's modus operandi. Signatures include parcels of plump siew mai ($9 for two) stuffed with Iberico pork and soft-boiled quail egg, and a Singapore-exclusive sugar-coated Peking duck bun ($10 for three). 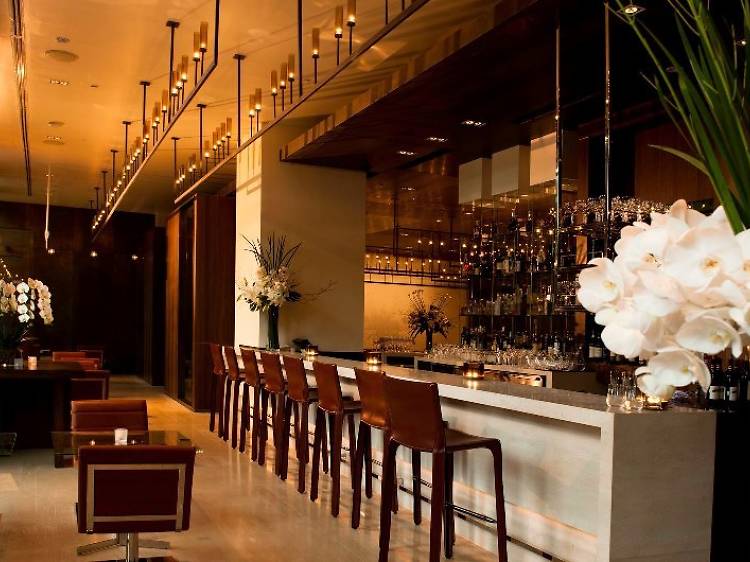 Wolf down a steak at CUT by Wolfgang Puck

You go to CUT for one reason: the steaks. Grilled over hardwood and charcoal, the hunks of beef come from a menagerie of sources. You've got USDA Prime from Illinois, Angus and wagyu from Australia, Red Poll from Suffolk, wagyu from Idaho, and even more wagyu from different prefectures in Japan. Each type is further broken down into different cuts, ranging from rib-eyes to New York strips to bone-in filet mignons ($75 to $280). 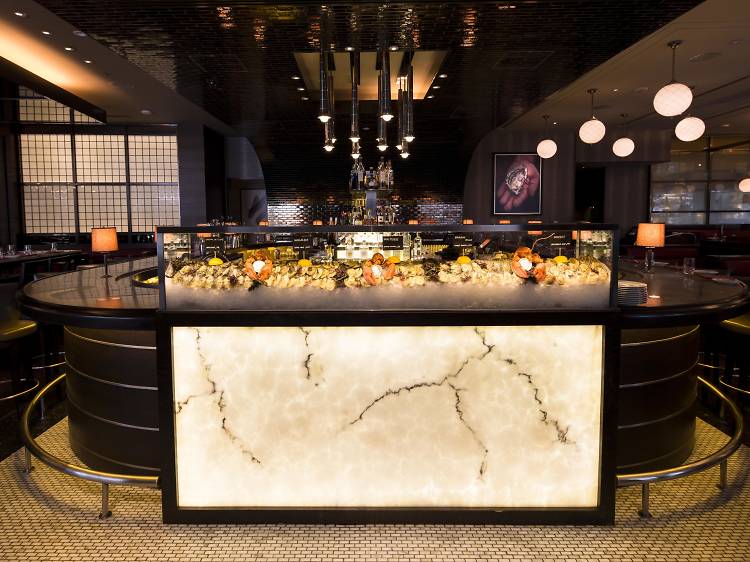 Think of Daniel Boulud's Marina Bay Sands spin-off as a cross between a New York-style seafood bar and a French bistro, mixing the best elements from both. It's upbeat and boisterous like the former, with towering triple-tiered platters of jumbo shrimp cocktails, oysters, Maine lobsters and more. But the bistro side of the menu is also every bit as hearty and robust as in a countryside kitchen. The French onion soup ($27) is the platonic ideal of French onion soups, full of beefy gusto and the sweetness of caramelised onions. Even more noteworthy: it's comforting yet simultaneously light on the palate. 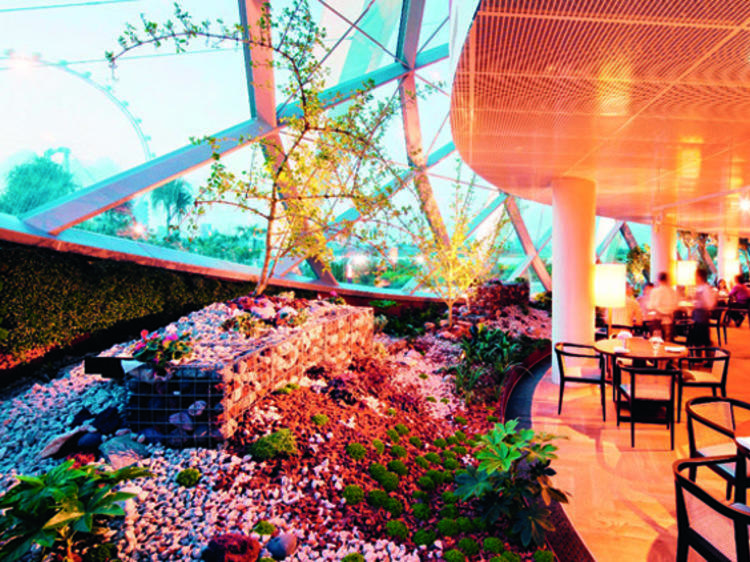 Have afternoon tea at Pollen

Pollen's afternoon tea ($38 per person) takes its cue from the fresh, bright flavours of Mediterranean cuisine, with sandwiches like the pan con tomate with parma ham and avocado; salmon, grapefruit and crème fraiche on multigrain, and red pepper hummus with sourdough chips. Sweets include the Valencia orange financier and Catalan tart. With natural light flooding the flower dome and a free pass to view the floral exhibitions, afternoon tea here is a treat in every way. 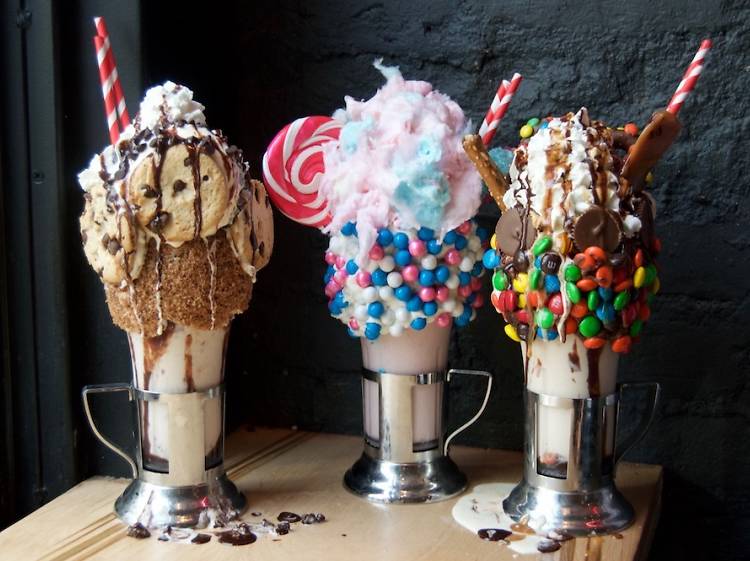 Black Tap's signature over-the-top milkshakes come in flavours like strawberry topped with a pink lollipop, rock candy, whipped cream and cotton candy, and one that's topped with fruity pebbles, Rice Krispies, a strawberry Pop Tart and Laffy Taffy rope. If all that sounds too sweet for you, balance things out with Black Tap's range of juicy burgers. Favourites include the all-American burger and the crispy chicken sandwich. 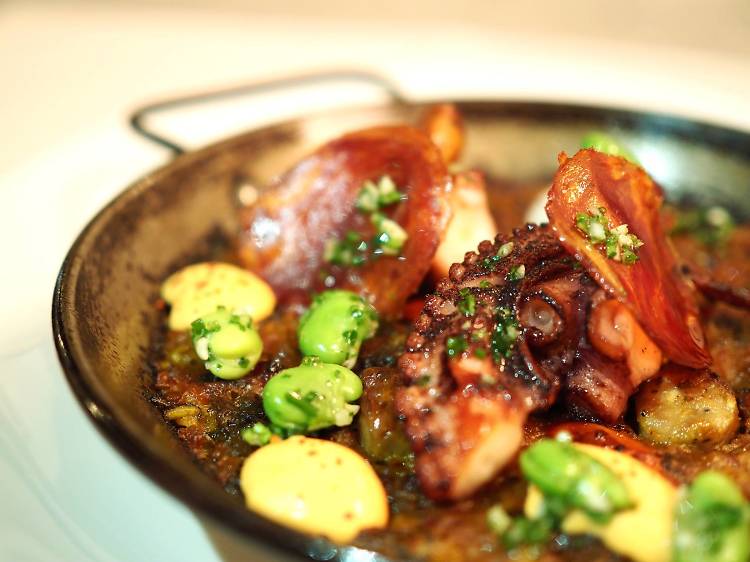 Eat like a Spaniard at OLA Cocina Del Mar

Helmed by chef and owner Daniel Chavez, OLA Cocina Del Mar is a laid-back Spanish eatery that focuses on serving the freshest seasonal produce. An open kitchen concept, OLA’s philosophy is to source ingredients in a sustainable way while bringing simple and tasty dishes to life. 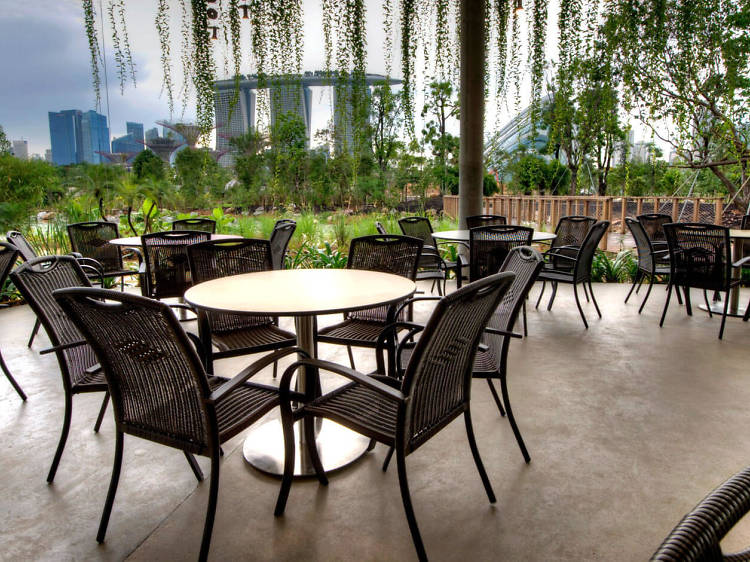 Feast on local favourites at Satay by the Bay

Sandwiched between the picturesque domes of Gardens by the Bay and Marina Barrage, the relatively remote Satay by the Bay was conceived at the start of 2013 to recreate a feel of the old Satay Club of the ’80s and also pay homage to the old Marina Bay area. Have supper under the stars as you take in sweeping views of Marina Bay while chowing down on all the best local street eats such as chicken rice, roast duck, prata and biryani. 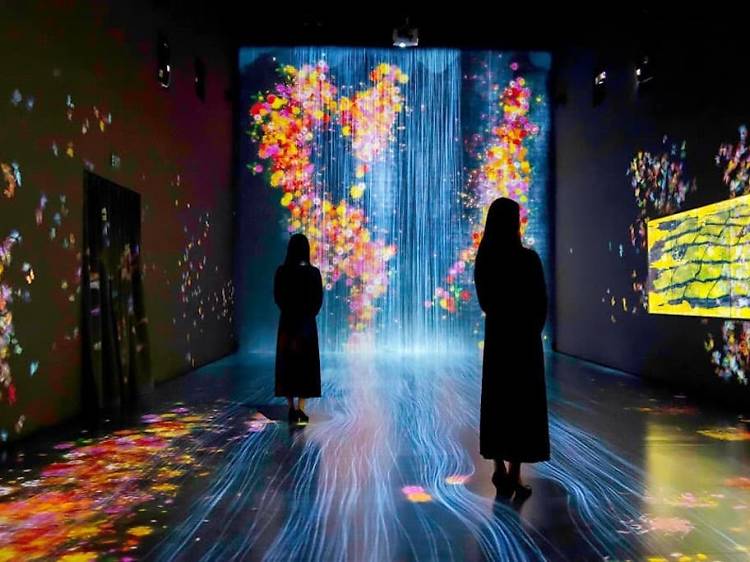 Check out an exhibition at ArtScience Museum

Fusing art and science, the 21 gallery spaces here have hosted some of the most famous exhibitions in the world. We're talking about those that feature the sets, costumes and props from blockbuster films such as Titanic and the Harry Potter franchise. Its current permanent exhibition, Future World, is a mind-bender: designed by Japanese arts collective teamLab, the show takes visitors on an interactive journey of lights, digital art and magic. 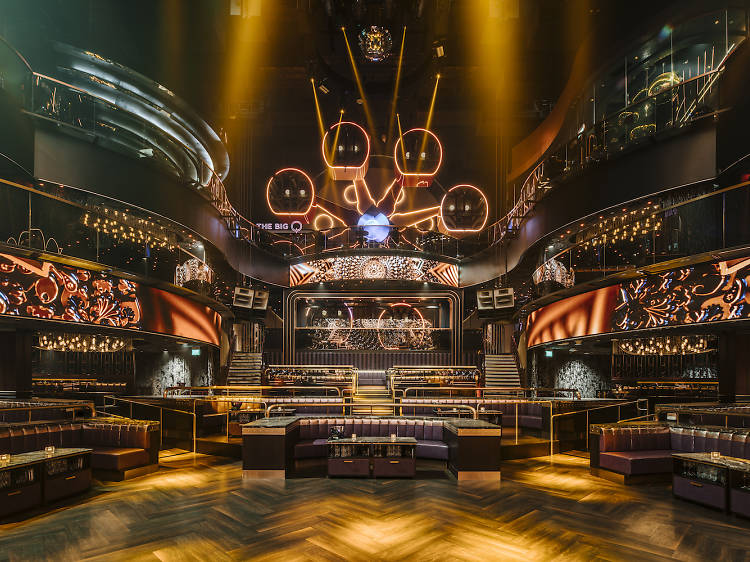 Party on a Ferris wheel at MARQUEE

Welcome the weekend with a memorable nocturnal carnival experience at this nightlife superstar. Priding itself as the biggest nightclub in the city, the indoor adult playground stretches over 2,300-square-metres across three floors with sky-high ceilings that tower up to 30 metres, and features a giant indoor Ferris wheel that offers revellers an unparalleled view of the nightclub. Beyond highly talented resident spinners, heavyweight entertainers and DJs from the dance music spectrum are also invited to helm its state-of-the-art Funktion One DJ console. 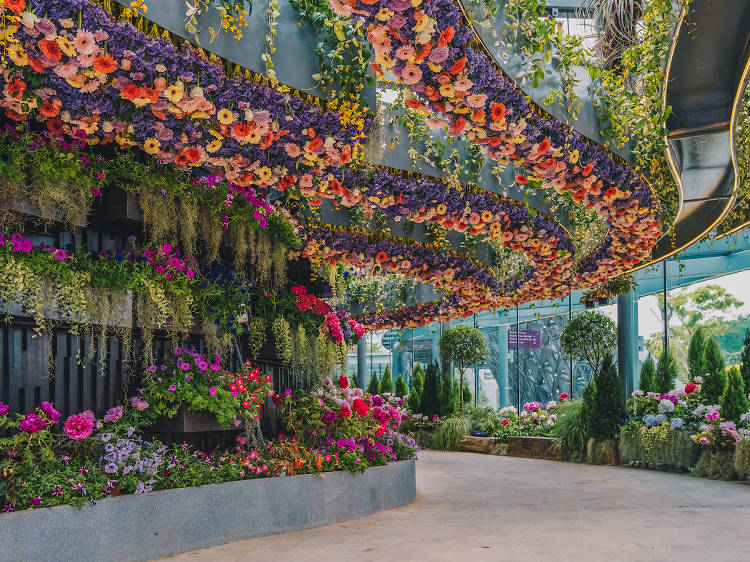 Gardens by the Bay

The stuff of nature-lovers’ dreams, Gardens by the Bay is a truly magnificent site. The 250-acre green haven is filled with huge, flora-wreathed towers connected by ‘skyways’ and two enormous conservatories. Opened in 2012 as part of a drive to bring more greenery into Singapore, the gardens are free for guests to explore but you'll need an admission ticket for access to the Flower Dome, Cloud Forest and Floral Fantasy that house rotating floral exhibitions. Needless to say, this is a non-negotiable must-see. 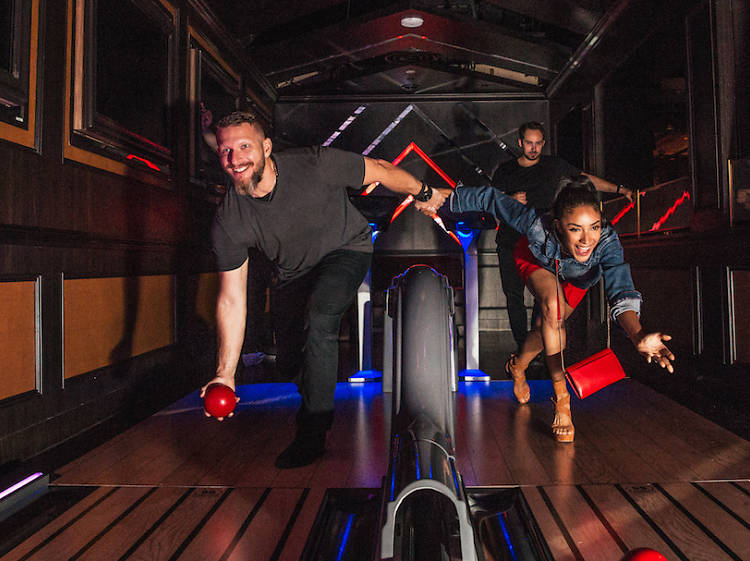 Challenge your mates at AVENUE

Start your nighttime indulgence with tantalising tipples and arcade fun at the stylish AVENUE. The lavish lounge boasts interactive play areas such as a mini-bowling alley, karaoke room, vintage arcade games like a pinball machine and skee ball machine, and a pool table. If you need some Dutch courage to ask out the hottie by the bar, pick your poison from original inventions and renditions of modern classics that take inspiration from AVENUE’s American roots and latest Asian home. 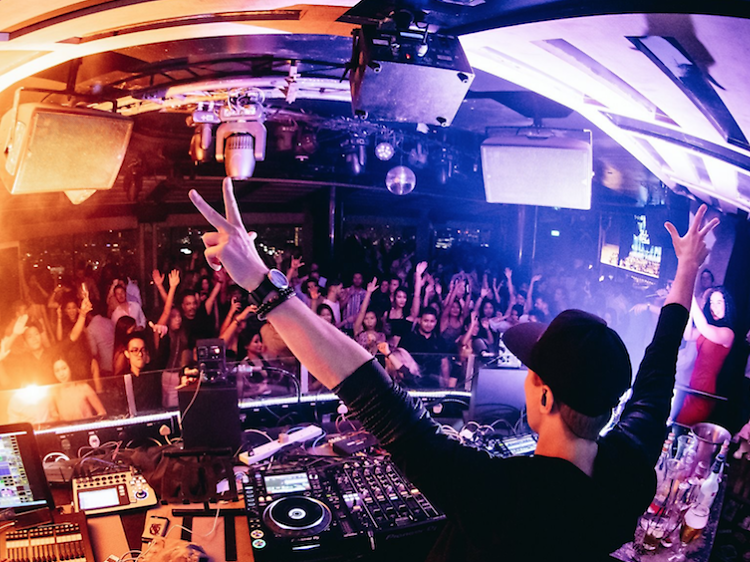 CÉ LA VI is one of the top (geddit?) ones – and its climb to the 67th spot in the DJMag’s Top 100 Clubs of 2018 list is a testament to that. Boasting 360-degree views over the Lion City, the nightclub is a hot spot to be seen. If you want to fit in with its A-list frequenters then be sure to dress the part. The club is known for throwing some incredible parties DJ’d by local and international names including Armin van Buuren, Fedde le Grand, Bob Sinclar, Roger Sanchez and Jazzy Jeff. Music genres range from nu disco to house, and dance hip-hop to afro-Latin. 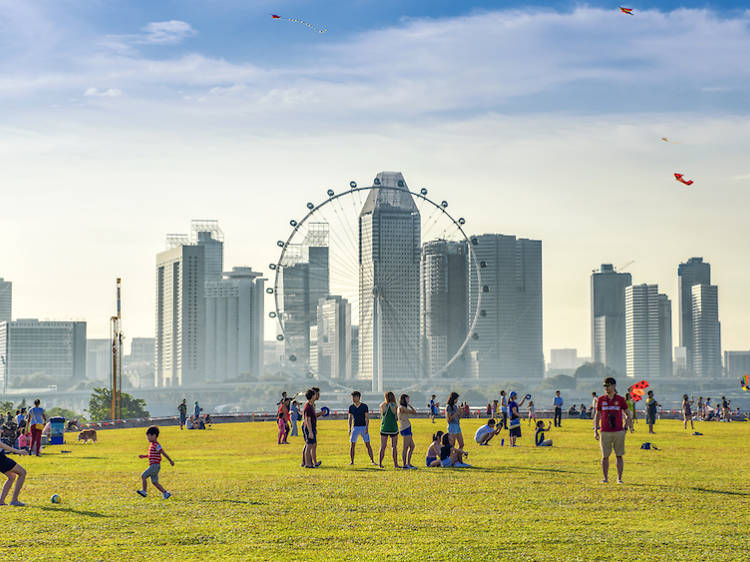 Fly a kite at Marina Barrage

Marina Barrage attracts couples and families all year round thanks to its breathtaking 360-degree view of the bay area. Bring your own kite to sail in the bay’s gusty winds or pick one up from among the cavalcade of colourful creations in the kite shop on the grounds. Besides flying kites, the park is a popular venue for yoga, jogging and kayaking – and also an ace spot to have a picnic. 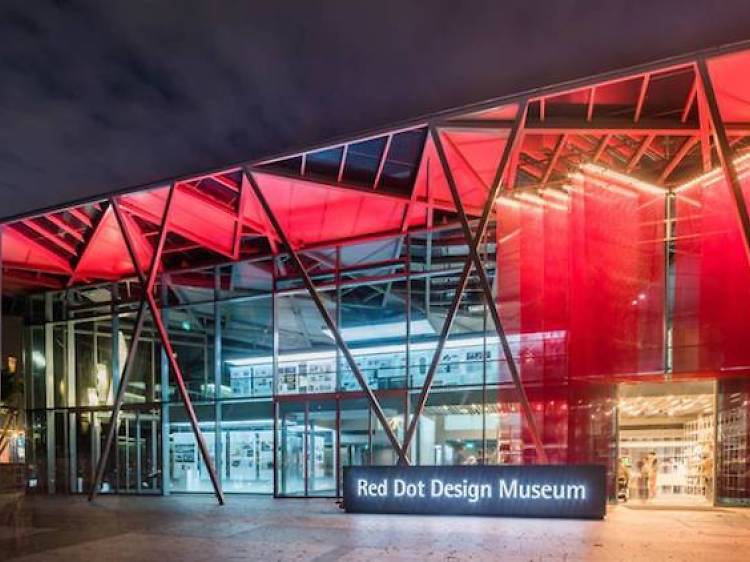 An offshoot of the famous Red Dot Museum in Germany, the largest exhibition of contemporary design in the world, this local version displays the latest in product and communication design made by winners of the prestigious Red Dot product design awards. 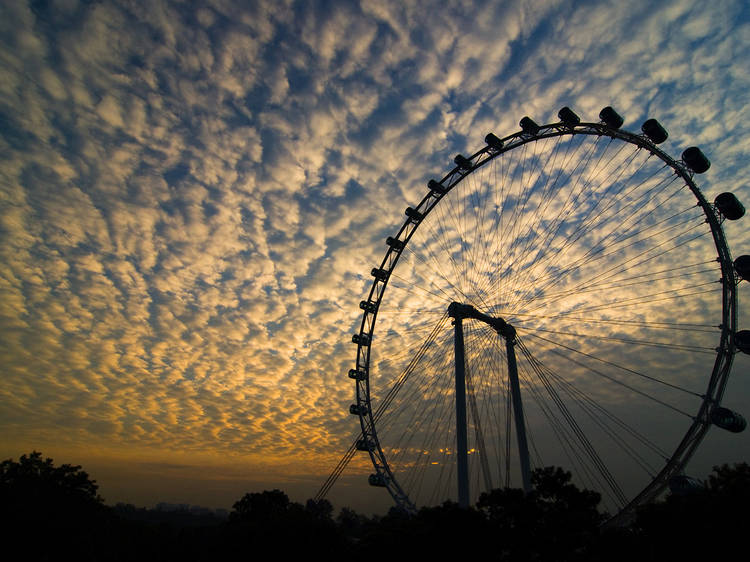 Get a bird's eye view on the Singapore Flyer

Marina Bay's giant, 42-storey, 165m observation wheel continues to pull a mix of tourists and locals who come for the breathtaking, 360-degree views of the city available from one of 28 air-conditioned, UV-protected capsules. Each flight lasts 30 minutes and on a clear day, the panorama from the top of the wheel stretches into neighbouring Malaysia and Indonesia. Dining and cocktail packages are also available if you're planning to make it more memorable. 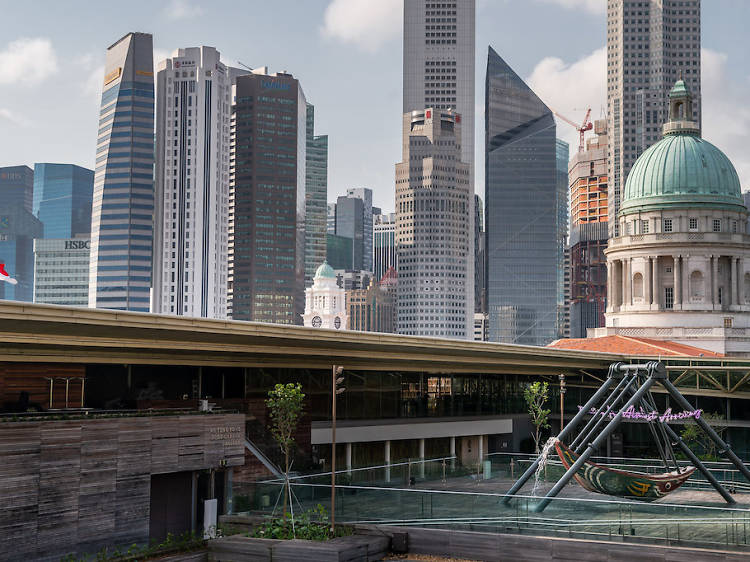 The ultimate guide to the Civic District 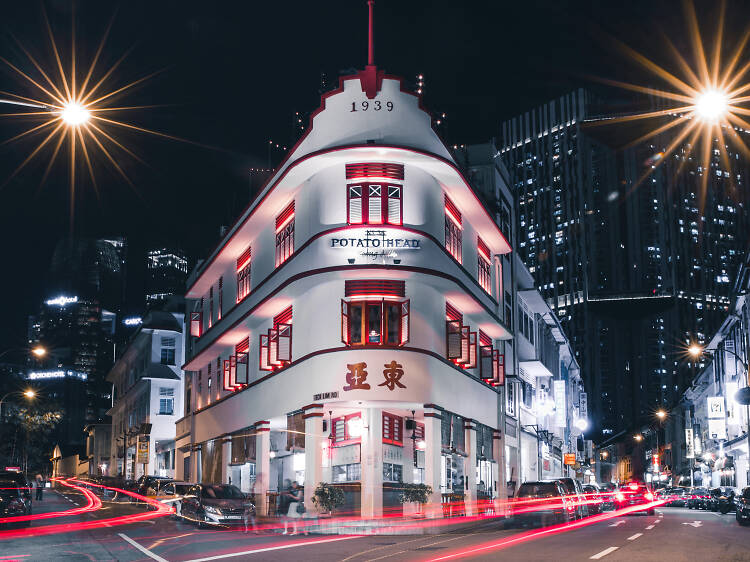 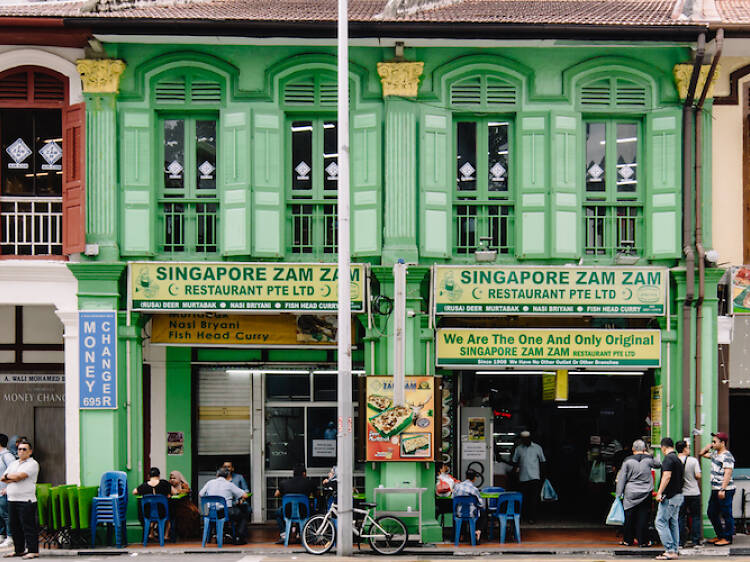 The ultimate guide to Bugis