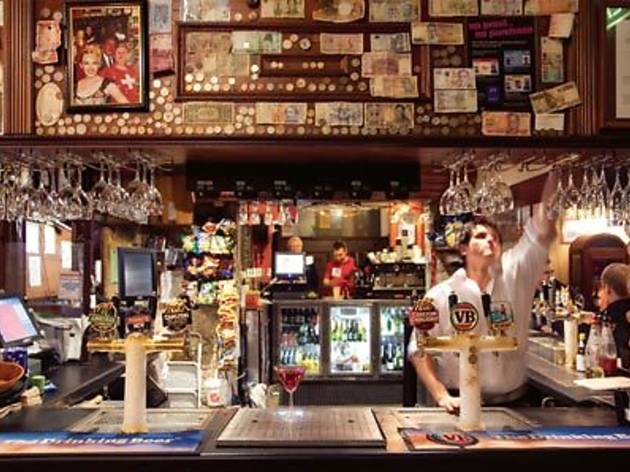 This storied Rozelle pub is doing things right: top-notch bistro, live music, weekly trivia, footy on the telly and cosy sandstone walls. It’s still a locals’ haunt, but these days you’re more likely to be rubbing elbows with a young professional and their dog than a wharfie. Order up a ploughman’s out in the courtyard when the sun’s shining, or a slow- cooked beef pie for when the weather turns nasty and you just want to hunker down with a counter meal and a round of beers. 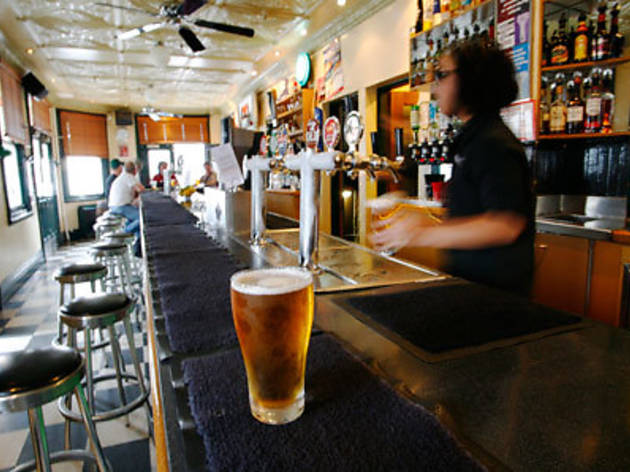 Drinking at the Carlisle can feel a little like stepping back in time. It’s not the primary clubhouse of Newtown’s youth the way the Courthouse is, but instead this backstreets pub likes the old ways. This is where you pull up a stool to the long front bar and sink beers while afternoon sun streams through the windows. Order up a beef and bacon burger, pop your money down on one of the pool tables and let the good times roll. 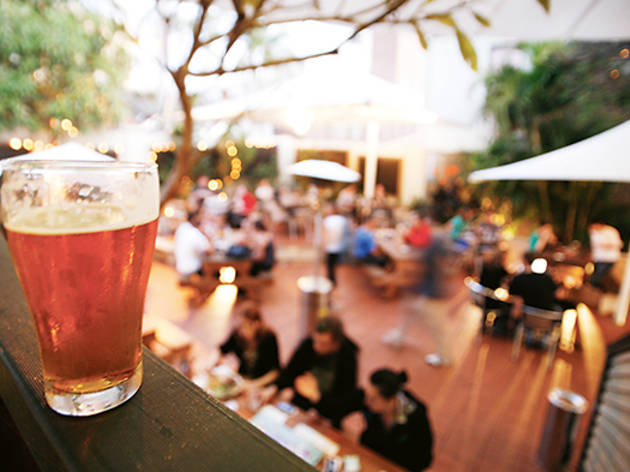 There’s nothing about this old boozer that we don’t like and we are not alone in that sentiment. We suspect if anyone ever tried to refurbish the Courthouse Hotel there’d be rioting in the streets. This old pub is like a well-worn jumper – warm, comfortable, and big enough to fit anyone and everyone. And like any cherished piece of outerwear, it may be a little scuffed and faded, but that’s what happens when you love something with force. 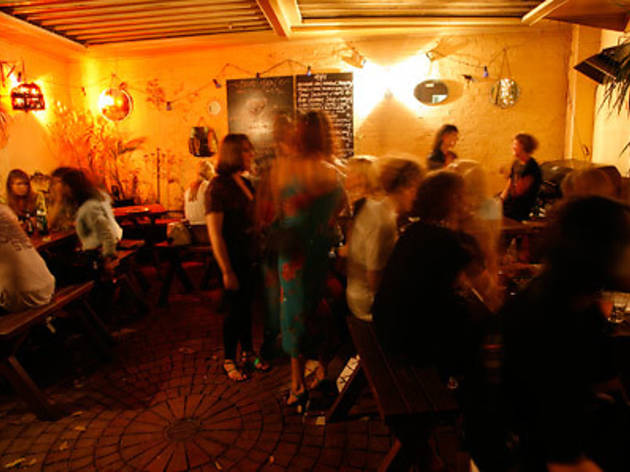 You’re pretty much guaranteed to have a good time at the Crix. During the week they have a ten-dollar steak special, rock’n’roll bingo, a pool comp and they run happy hour from 5-7pm weeknights. When Friday rolls around they are also not afraid of some proper party times, and given the hard-worn look of this old boozer, it’s the perfect spot to blow off some steam without worrying about scratching the furniture. 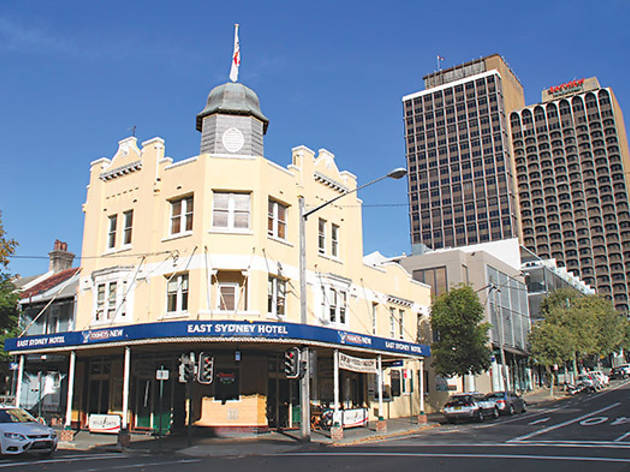 If you’re really feeling the grind of the modern world and want to take things right back to basics, a night at the East Sydney should sort you right out. This simple-pleasures corner pub hasn’t changed the way it does things for more than a century and it hasn’t really needed to. The appeal of cold, fresh beers, simple, cheap bar snacks, solid timber furniture and maybe a folk or bluegrass band on a Wednesday night will never fail. 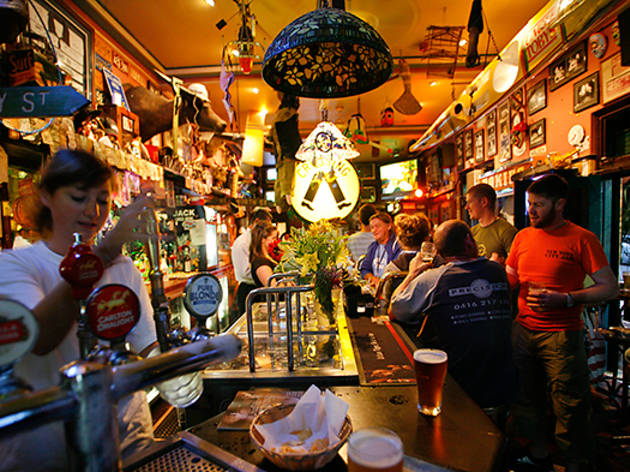 You know that wonder you felt walking into a crowded toy store as a child? We get that same tingle when we’re drinking at the Friend in Hand. The walls and ceiling of this old-school pub are bedecked with intriguing tat that makes you wonder if perhaps this is where all lost things end up. We’re talking animal heads, instruments, postcards and old signs. There’s a working model train and mannequins dressed in scuba gear and uniforms. They even have a cockatoo for daytime company, and a case of hermit crabs for the weekly crab racing.It’s the sort of place that somehow manages to gather up all the lost and wandering night owls of our fair city, and bring them together for a session of beers, banter and jukebox requests. Stick to the seats around the big downstairs bar for a quiet drink, or head upstairs where they’ve got a pool table, a tiny outdoor courtyard and couches. 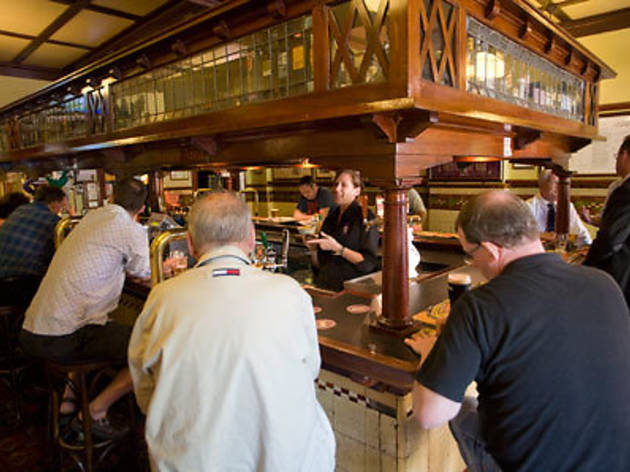 While venues like the Argyle and Orient pull in a rowdy party crowd, the Fortune of War attracts old guys, regulars and folks who are after a no-nonsense pub with space to talk, rest those weary traveller feet and to quench that well-earned thirst. Take a seat at the bar, order a schooner from one of the 15 beers on tap and take in the hospitality. The Fortune claims to be Sydney’s oldest pub and that fight to be recognised is documented in newspaper cuttings, which are framed and hung on the wall. 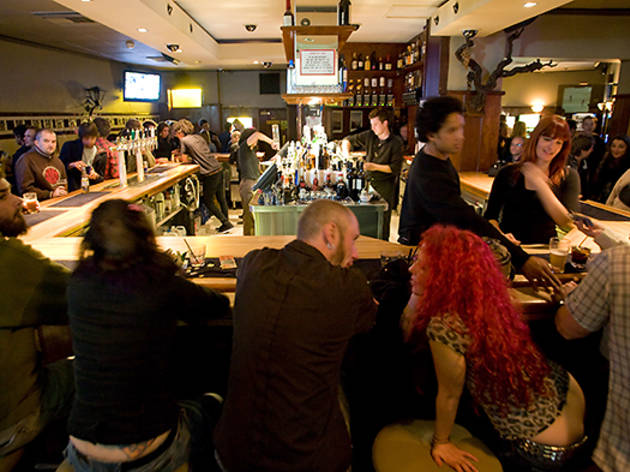 Everyone you know will probably have a story about a night at the Gaso. It’s the sort of place that somehow manages to gather up all the lost and wandering night owls of our fair city, and bring them together for a night of beers, banter and jukebox requests. Stick to the seats around the bog downstairs bar for a quiet drink, or head upstairs where they’ve got a pool table, a tiny outdoor courtyard and couches.
Read more
Advertising 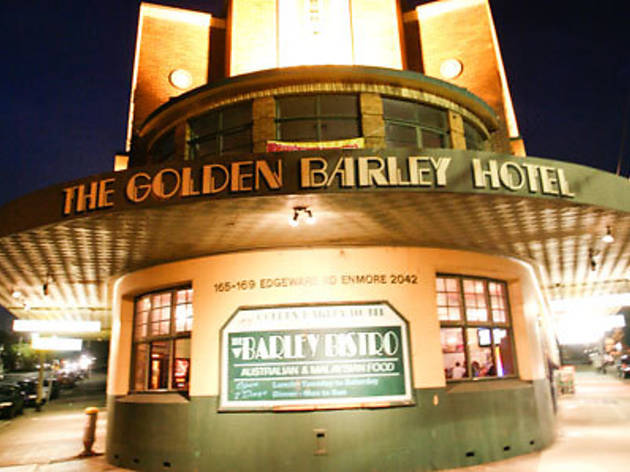 Sometimes a little nip and tuck can be good for business. We’re not talking a terrifying facelift, more a renovated bistro and a few craft beer taps to spice things up for the regulars. And in the public bar at the Golden Barley they’ve left well enough alone. Behind the beautiful old Art Deco façade there is still dark green carpet, comfy vinyl chairs, a Keno corner, four big TVs, pinball machines and pool tables. 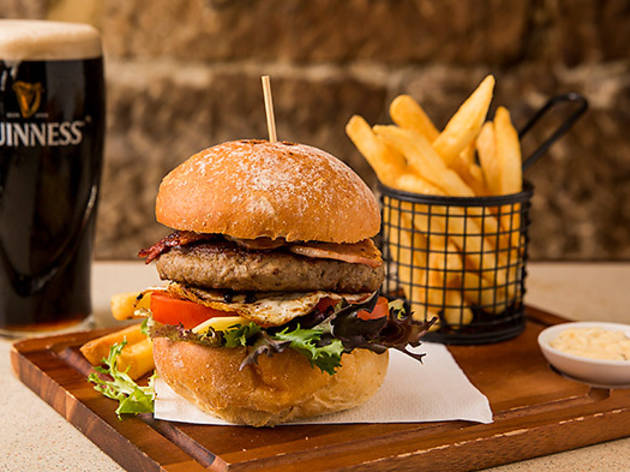 The Hero was built in a no frills era, and they haven’t added any in the intervening 170 years. Timber floors, convict-hewn sandstone walls and lantern light create the shell in which Guinness is to be drunk and songs sung by the fireside. Things can get a little rowdy if a bar crawl comes through, but it’s always got a strong crowd in attendance most days, matching James Squire brews to a rich lamb shank with gravy on a mammoth pile of mash, or making short work of the house burger that eschews the American style taking over the city’s eateries. This is an old fashioned works burger – taller than it is wide with a well-seasoned, well done beef patty with heaps of tinned beetroot, mayo, lettuce and tomato. 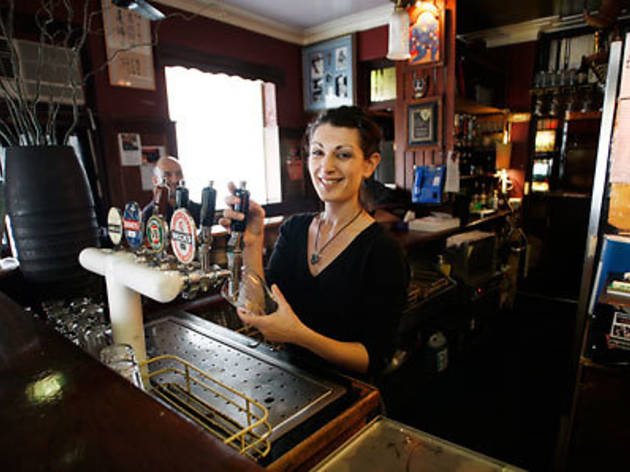 She may not be the latest thing when it comes to Sydney booze institutions, but this old dame has been a reliable port for low-key drinks for decades, and when the mood strikes she’s also been the site of a bit of a rager under the spinning mirror ball. She may be in the lockout zone, but that gives you a solid hour and a half after Tio’s (the tequila bar next door) closes to walk the few metres to the leased the back half of the building to a burger kitchen famous for their American-style cheeseburgers and weekly experimental numbers. We’re talking anything from a peanut butter Elvis-inspired burger to a field mushroom edition made with Bloody Mary sauce. 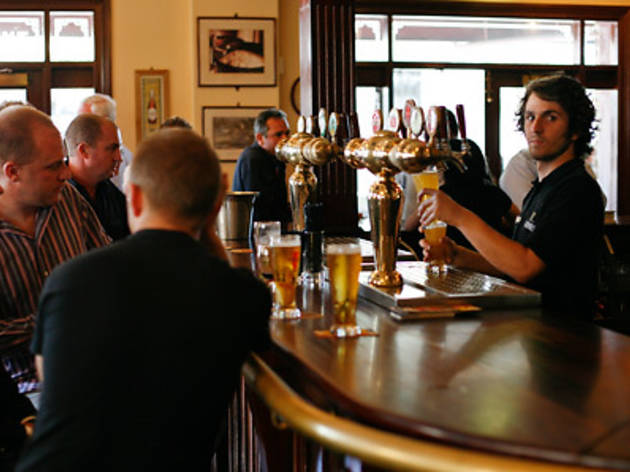 The street-front balcony at the London Hotel is some of the most prized real estate in Balmain, and that’s saying something in a suburb where the average house costs close to a million bucks. But as the face of this formerly-working-class-and-now-gentrified-as-all-get-out suburb has changed, the gallery of faces perched up above street level at this main street watering hole has never diminished. And there’s good reason too. Firstly, they serve Redback on tap and have done since long before the rest of Sydney’s pubs developed a taste for craft beer. They serve it in tall glasses with a slice of lemon at the bottom. When you are stinging for a drink a frosty glass of wheat beer is the closest thing you’ll find to ambrosia. 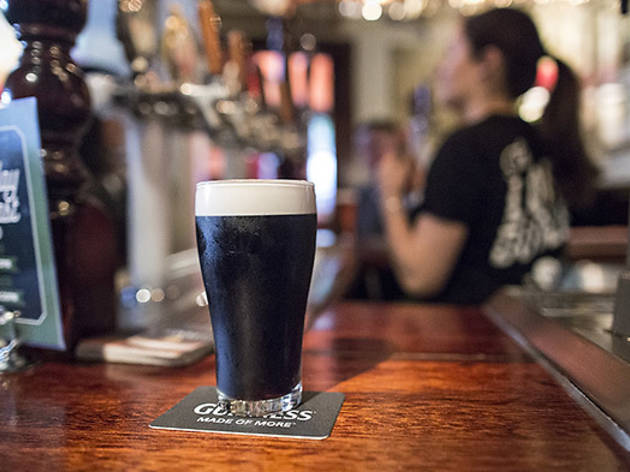 Of all the things Sydney has adopted from the British, the public house is probably our favourite. What you want is a rambling corner tavern with fresh ales, hot food, an open fireplace to warm yourself by and plenty of Old World memorabilia on the walls so you have something to stare at over the lip of your pint of Guinness. The Lord Dudley fits the bill perfectly. It’s OK if stout isn’t for you: they also strike an easy balance between classic lagers and craftier local offerings. 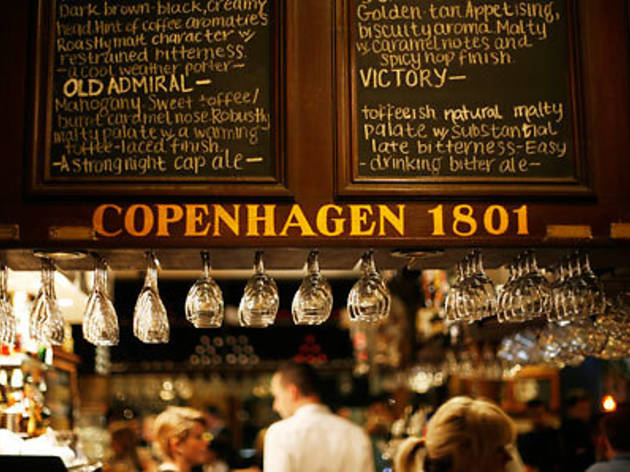 Being the oldest continuously licensed pub in the city, the Lord Nelson has had a lot of practice at being awesome. (Sure, the Fortune of War Hotel is older, but there was that whole getting-closed-down-and-demolished-due-to-the-plague thing so the Nelson has the longest, unbroken run.) They brew their own beer here and a fresher pint in Sydney is a tall ask. There are six mainstay brews: the summery beginners’ Quayle ale, the bright 3 Sheets, the British-inflected Trafalgar pale ale, the full-flavoured, spicy Victory Ale, Nelson’s Blood for the Guinness/porter fans, and the complex, full o’ flavour Old Admiral. 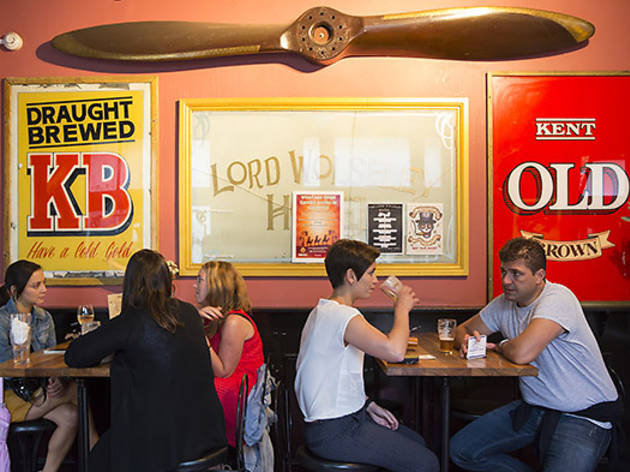 It’s not like we didn’t already love the quaint little pub hidden on a leafy street in Ultimo. Lately they have kept the public bar as a comforting spot for a beer and you want in a local: breezy streetside seats, decent wines by the bottle, good beers on tap and counter meals. But it also has a theatre on the premises. Indulge in a little culture of an evening or just watch the colourful cast of devoted locals. 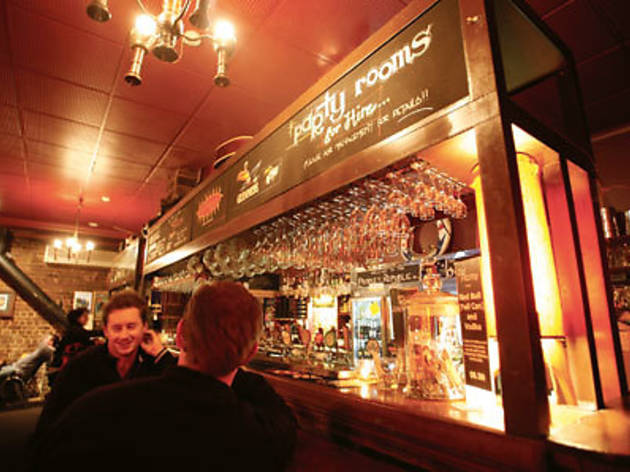 In the dip between Woolloomooloo and Kings Cross there’s a famed patron of the arts, and she’s not an heiress, she’s a pub, and a great one at that. The Old Fitz has all the things you want in a local; breezy streetside seats, decent wines by the bottle, good beers on tap and counter meals. But it also has a theatre on premises, which means you can indulge in a little culture of an evening, or just watch the colourful cats of locals who are fiercely devoted to this watering hole.