Five ways to turn a classic holiday party on its head

We try out a contemporary twist on the classic potluck dinner, sharing food and music with friends

I’ve been a DJ for 15 years. Only ten per cent of my work as a DJ has actually involved DJing – playing music to people in a club or at a festival – the bulk of my job as a DJ is listening to as much music as possible, putting together a library of sounds that I can pull from in order to play to any kind of crowd. The importance of music to a DJ can’t be understated – without it, a DJ doesn’t have a job – but music never felt more important to me than during the three years I ran a kitchen.

Being able to sing along to an entire Jebediah album with my staff when things were good, or being able to blast the shoutiest rap song on the Ferrari Boyz mixtape when things were bad made working together as a team so much easier. I love when you can hear different music bleeding out into the restaurant. What are those chefs doing in there? Bonding over They Might Be Giants album cuts? No wonder my steak tastes so good.

Food and music go together better than chips and chicken salt, and to celebrate this pairing, Sonos are reinventing the potluck dinner party. They’re encouraging fans of food and music (so, everyone) to host a gathering with their mates, but instead of bringing a plate, they want the guests to bring the music. The result is a ‘Playlist Potluck’ party.

To test out the concept Time Out and Sonos asked me to get a bunch of chefs together over a meal to discuss our favourite music to cook and eat to. My good friend from ACME (and the co-host of my food podcast The Mitchen) Mitch Orr hosted the lunch at his place, setting up a charcoal grill for a menu of charred honeybugs, squid and steak tartare.

Joining us for lunch was a collection of our favourite chefs in Sydney, including Dan Hong (Mr Wong), Analiese Gregory (Bar Brose) and Paul Carmichael (Momofuku Seiobo), plus bartenders Mike Nicolian (Continental Deli) and Lewis Jaffrey (Big Poppa’s). Also at the table (and contributing to the playlist) were photographer Daniel Boud, Time Out CEO Mike Rodrigues and the Country Director of Sonos Australia Rennie Addabbo. This collection of humans produced an eclectic selection of sounds.

Now that we’ve tested it, here’s my advice for anyone throwing their own playlist potluck party.

Keep what you cook relatively simple. Have your prep done before the guests are there to minimise the time spent actually cooking. It’s weird when everyone’s just sitting around waiting for you to cook the food you promised them. Don’t waste time making separate serves for each guest – do a bunch of shared plates. Even better – set up a charcoal grill, like Mitch did, in the middle of the table and have everybody cook their own skewers of meat and vegetables. Just be prepared for the smoke alarms to go off. Having Mitch cook variations on the food he serves at ACME in the comfort of his own home was pretty special – the food was a little simpler and he made it all seem so effortless.

2) Be prepared for the vibe to change

When the music shifts gears, so will the conversation. The most noticeable change is in the way people move in their seat. Even though you can’t see people’s butts beneath the table, you could tell everyone was shaking theirs as soon as Analiese’s Rihanna tracks came on. You might have some distracted conversations as people focus more on the beat but it’s all par for the course.

3) Have the pop-fiends add their songs last

Usually dinner parties are all about matching the right things for the food – the right drinks, the right cutlery and plates. But when choosing a playlist it’s all about choosing the right music for the people who are eating with you. Treat the meal like a club night – make sure the first hour is a good warm up set, don’t waste all your bangers early and hold off on the biggest anthems until dessert.

Never mix friends with family. Be wary of inviting people who you work with into your home. Nothing bares your soul like cooking for a big group, and newer friends may not be ready to see this side of you. People will drop out, and that’s ok – it just means more leftovers for you.

You gotta be careful when adding to the Playlist Potluck, especially after a few wines. I meant to add just one Pixies song and ended up adding an entire album – we made it halfway through an album’s worth of angry deep cuts before anyone realised. It was weird.

At our party, we bonded over food and music, then complained in unison about how hard it is to enjoy both in Sydney at the moment. With Sydney’s lockout laws not letting anyone enter nightclubs after 1.30am, those in the food industry are rarely able to finish work in time to make the cut off. Everyone shared stories about how important those post service drinks and dances were in their early days working at restaurants and bars, and how unfortunate it is that so few of their younger staff today are able to bond in that same way.

As the sounds of Pnau’s new single Chameleon blared through the speakers, Mitch put an enormous tiramisu on the table for dessert, which we demolished in minutes. If you suck at cooking but want to contribute to Christmas lunch this year, start a Playlist Potluck with your friends or family and get everyone to add a few tracks they like to eat to. You might find out that the secret to your gran’s potato salad is the Tupac song she always puts on when she makes it. 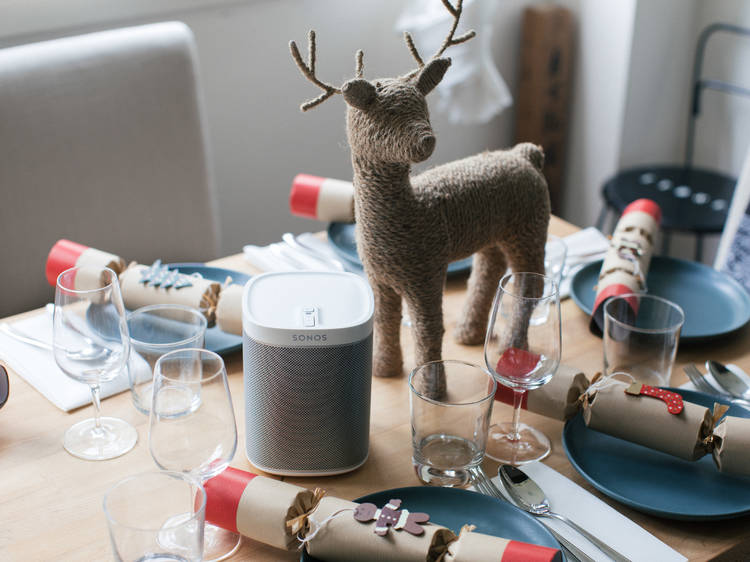 Host a playlist potluck party of your own

Try it and you’ll have a chance to play host to the ultimate dinner party. The means one of Australia's top chefs cooking a specially tailored menu, at your place, for you and five mates.  Other prizes include a starter pack from Sonos so you can always fill your house with music, whether you’re entertaining or not.