Need a cake for an office party, birthday party, wedding or divorce party? Don’t worry Sydney, we got your back. Here are our top seven party cakes: every one delicious, and every one offering something unique, from a designer feel to extreme convenience. For more sweets inspiration, check out our guides to Sydney's best desserts, ice cream and gelato and hot chocolates.

The best cakes in Sydney 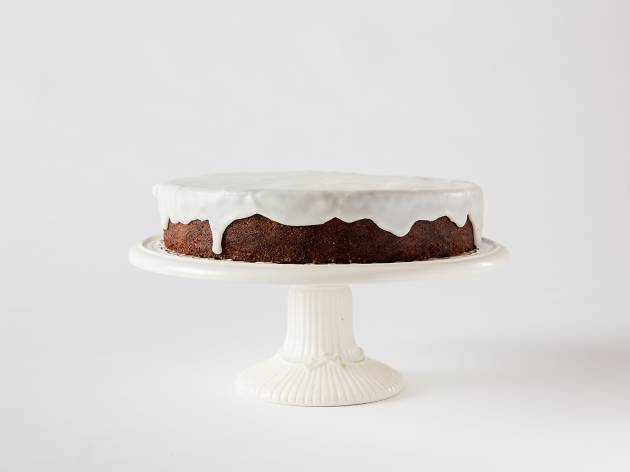 There are so many beautiful cakes to choose from at Flour and Stone, but nothing quite says ‘I love you’ like their lemon drizzle cake. It’s an almond and flour-based cake that is dense and fudgy, but not too sweet. It’s topped with lemony icing that drips down the sides, which is all the adornment it needs – it’s the elegant simplicity of this cake that makes it so wonderful. For people who love the classics, or hopeless romantics, we can’t think of anything more perfect. 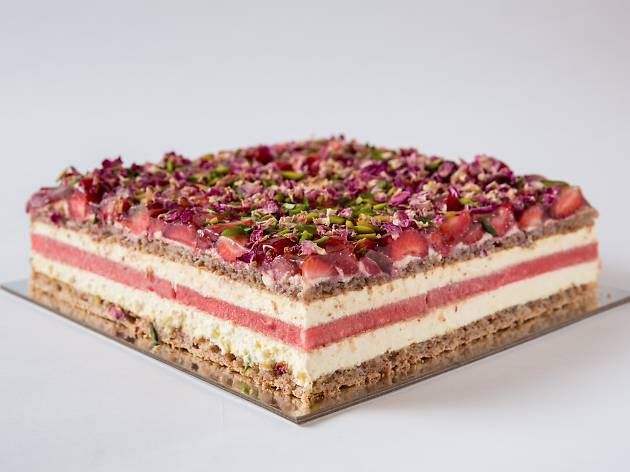 Prices start at $29 to feed up to four

Perfect for… jazzing up an office party

What can we say about this cake that hasn’t been said before? It’s a masterpiece of a thing: layers of rose-scented cream and almond dacquoise, filled with crushy slices of watermelon and decorated with jelly-like strawberry glaze, fresh strawberries, Iranian pistachios and rose petals. It’s light, complex and refreshing, and one of the greatest cakes this city has given to the world. Nothing makes people happier to be at work than Sydney’s most beautiful cake. 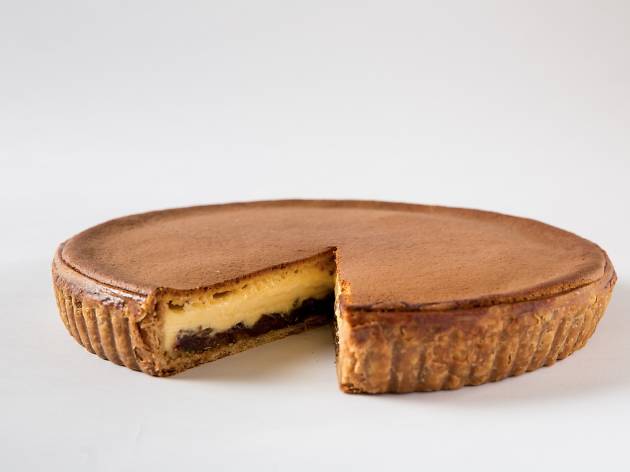 Perfect for… those in the know

Back when it was perfected by Lorraine Godsmark and Neil Perry in the 90s, this tart helped to define what Australian pastry could be. It’s still on the menu at Rockpool as a petit four, but the only way to get the real deal is to go straight to Lorraine, and ask her (very nicely) to make one in advance for you. What is it, you ask? Well, it’s the flakiest, most buttery pastry encasing soft, sweet Californian dates and a thick layer of creamy, unbelievably silky vanilla custard, cooked in such a way that a caramelised crust forms on the top. It takes six months to train a chef to make this dessert, such is the complexity of the pastry alone, so now Lorraine makes them all herself, and only two at a time (see why we said to ask nicely?). A back-up option here is Lorraine’s mind-blowing cheesecake, which is so fluffy, it’s like eating an actual cloud. 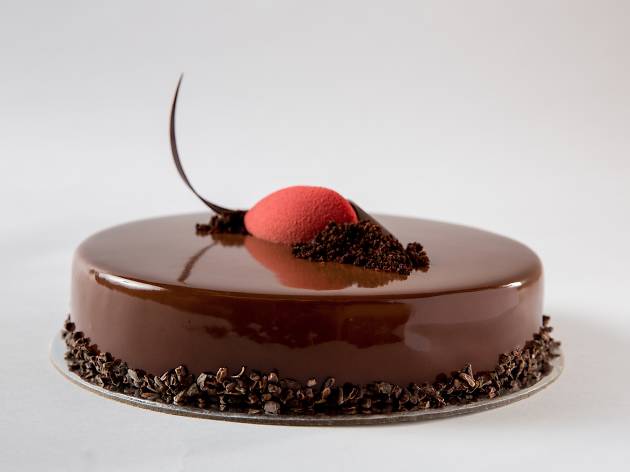 Prices start at $28 to feed up to ten

Perfect for… the chocaholic in your life

This is more of a dessert than a cake, made up of super-smooth chocolate mousse sandwiching sharp-tasting raspberry cremeux, all sitting on a base of chocolate pain de genes (that’s cake to you and me) and glazed with a thin slick of chocolate ganache. It’s in the style of French pâtisserie – gentle flavours and unimposing textures – and is perfect for someone who doesn’t want something too heavy, but still wants to feed that chocolate urge. 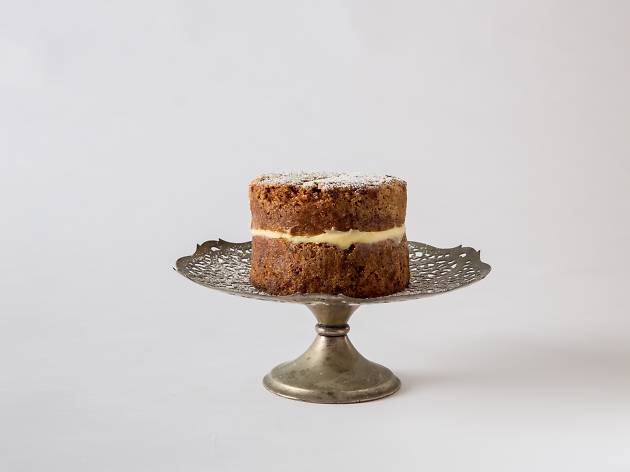 Prices start at $20 to feed up to eight (stingily)

Perfect for… when you forget to order the cake

Bourke Street Bakery stock these little carrot cakes (as well as their flourless chocolate cakes) in all of their stores, so if you forget to get the cake, they’ll have you sorted. This cake will feed four people easily, but in a fix, you can get eight small serves out of it. The carrot cake is scented with cinnamon, flecked with fresh carrot and studded with walnut pieces. The cream cheese frosting is faintly sweet, but isn’t whipped so is properly cheesy rather than light and fluffy. In a tight spot, you won’t find a better last minute cake in Sydney (there are branches practically everywhere now). And who wouldn’t be thrilled with a cake from Bourke Street Bakery? 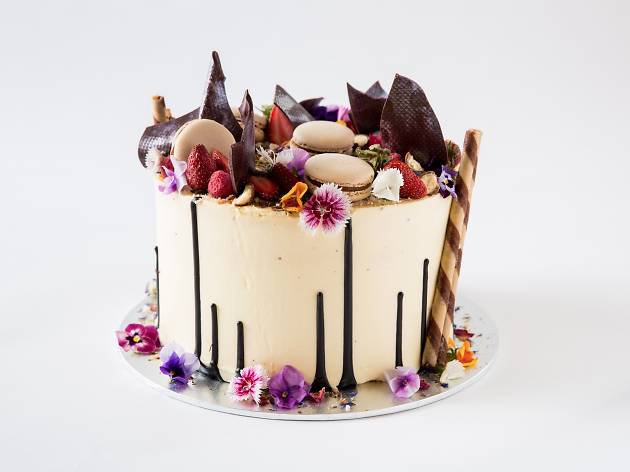 Perfect for… birthdays for folks of all ages

This cake is certainly a looker. The Instagram sensation that is Cakes by Cliff has seen owner Clifford Luu making cakes in his spare time around his office day job, and now he’s one of the hottest cake-makers in Sydney. He’ll design the cake around your ideas if you like, but we opt to leave it to him to decide what to make. We’re pretty thrilled with what we get: alternating layers of moist chocolate fudge and vanilla butter cakes, with salted caramel and peanut buttercreams, crushed pistachios, pieces of Crunchie bars and Coco Pops. Crowning the top are edible flowers, chocolate shards, macarons, Maltesers and crushed meringue, among other miscellany. Now just try to tell us you don’t want a slice. 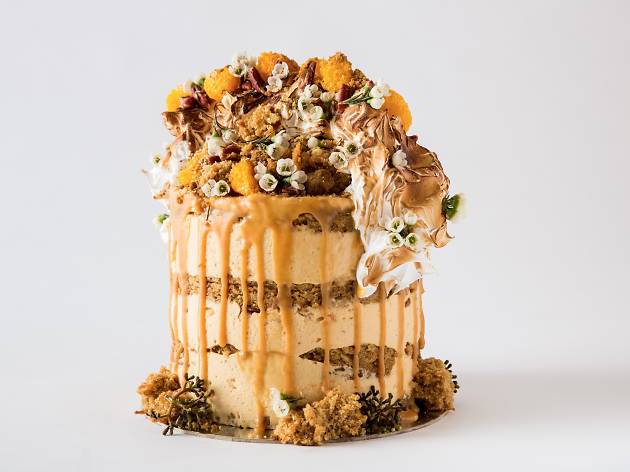 Andy Bowdy’s cakes need little introduction, given their presence on social media. The former Hartsyard pastry chef (the guy behind their famous soft serve dessert) branched off on his own recently and now makes kickass cakes out of the Messina kitchen. The flavours change regularly, and you really can’t go wrong with any of them, but the ‘Grace’ cake is layers of carrot cake, sweet and bitter caramel mousse, crunchy whole pecans, sour orange gel and chunks of baked cheesecake. There’s a big gingerbread biscuit in there to keep things spicy. On top it’s all about torched meringue, salted caramel and freeze-dried mandarin, making this more of a dessert than anything else (hot tip: use this cake to replace dessert at your big event – wedding, birthday etc – rather than paying for an extra course for your guests). You’ve gotta try one of these once in your life, you’ve just gotta. 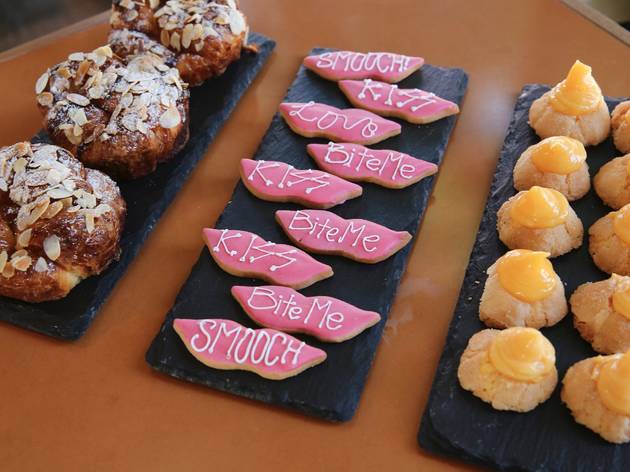 We’re pretty lucky that here in Sydney we have some of the best darn pastry chefs in the country. From the genius that is the strawberry watermelon cake at Black Star Pastry, to that ginger tart at Bourke Street Bakery, here’s where to get a lil’sweet stuff in Sydney.

Throwing a shindig in Sydney? 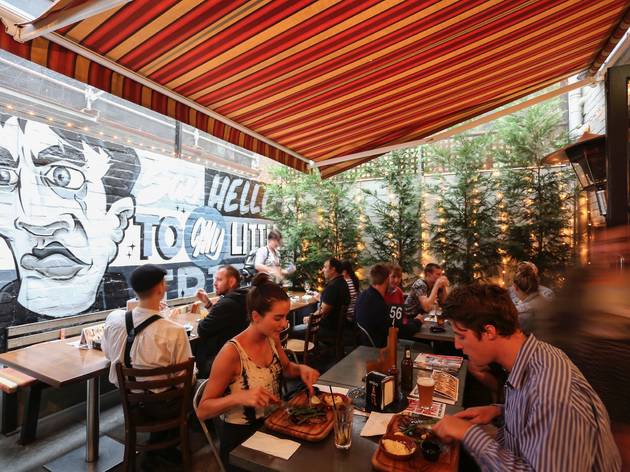 Engaged? Throwing an office party? Celebrating the day of your birth? Doing these things at home is for suckers. You have to clean, wash up, cater. It's all a bit much. That's where these lovely venues come in. They're happy to host your party for you, and they've got the private rooms, function centres and more to do it in.