Halal Snacks Packs are so popular right now they don’t even want you to sit with them. This is thanks mainly to Sydney’s very own Halal Snack Packs Appreciation Society (HSPAS) Facebook page, where people post and discuss their favourite HSPs, rating them based on criteria as follows: “Show us a sick pic of ur halal snacky, whered ya get it?, is it sick?, is it halal? and salrite or na? also, is it a halal snack pack mountain or na?”

So what is it? Well, it goes like this: hot chips on the bottom, topped with an optional cheese layer, and then an essential halal kebab meat layer (either beef doner, lamb or chicken, or a mix of all three). On top of this is drizzled the ‘Holy Trinity’ – that is, chilli sauce, barbecue sauce and garlic sauce (more like a tzatziki than the thick, mayonnaise-like sauce you might expect). It comes in sizes so big you’ll be lucky to get through one between two, and sizes so immense they have to be fitted into jumbo pizza boxes. There are no small portions in the world of HSP: the dish that looks like someone vomited over a polystyrene box, but tastes like late-night food you’d queue for an hour to get to.

Here’s how we completed our HSP quest: we created a hit list of the most talked about venues in the city, and hit them all in one saturated fat laden day. At each venue we ordered the same thing: mixed meats and cheese. Although there are a range of sauces available, we stuck with the ‘Holy Trinity’, to keep things on an even playing field. We did not get, sadly, a “Hello brother/sister” at any of the venues, which HSPAS fans frequently report receiving. Where’s the love, man?

Here are our five picks for Halal Snack Packs in Sydney right now:

Need some vegetables after all those chips? Try one of Sydney's best vegan restaurants. 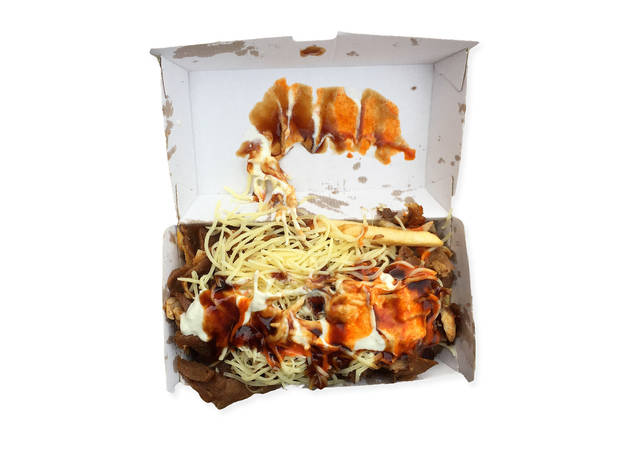 Close your eyes, and you might think you’re roaming the streets of Istanbul in this fun, frantic, charcoal-smoke filled eatery in Auburn. The HSP sees chips layered up with greasy chicken and beef doner kebab. They put the cheese on top of the meat, which is a rookie error – for maximum meltage it needs to sit between the chips and meat. But the way they do it here means the cheese stays cold and dry rather than melty and stringy. Then the whole lot is slathered with mild, sweet chilli sauce, garlic sauce and barbecue. It's not the best example in Sydney, and we’re wishing we had the shish plate instead, with smoky, charred chicken kebabs hot off the charcoal grills at the front. 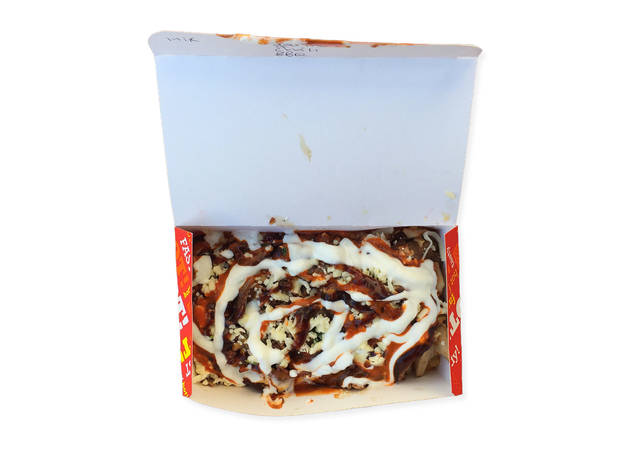 This late night kebab shop on Enmore Road attracts after-hours crowds and has built up a decent following online for its Halal Snack Packs. The interior is not much to look at, but there are tables up that back if you want to eat in. The HSP itself isn’t nearly as big as the others we try (blame it on inner city rents?!) but it's loaded with meat. The ‘mixed meats’ means beef and chicken here. The chicken is tender but the beef tastes like lamb (why does it always taste like lamb?). The chips are crisp and greasy, which ain't a bad thing if you're a bit worse for ware. The cheese is proper cheddar but doesn't melt well. There's a good kick from the chilli sauce, a hint of creaminess from the garlic sauce and a good hit of smoke from the barbecue sauce. Order a piece of their gooey, rose-scented Turkish Delight to finish on a sweet note. 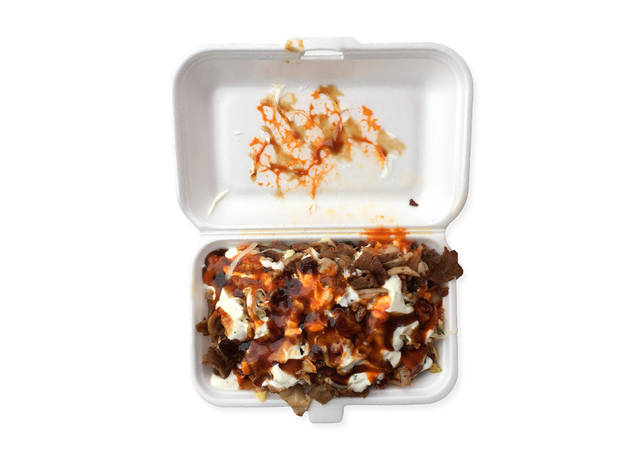 King Kebab House is one of the few kebab joints that has the HSP on its actual menu. Here, you can choose between three sizes, and three types of meat: chicken, beef or lamb (we get mixed of course). There's a nice mix of textures from the meat, including little caramelised shards, and the garlicy yogurt sauce has a nice minty quality that separates it from the other options around town. The cheese, placed between chips and meat, has melted nicely to stringy stretchiness, although there could be more of it. The chilli sauce is mild rather than hot so ask for an extra kick if you want to up the chilli factor. 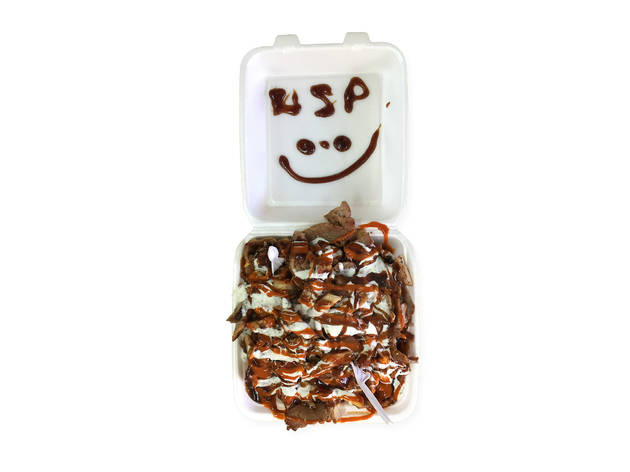 Here at Metro One, you can get your HSP in not one but four different sizes, the biggest of which costs $50 and is the size of a 15" pizza box. But the smallest one, seriously, will easily feed two. We get a mix of döner beef and chicken and order cheese as well. It has to be said that our HSP is made by a bunch of nannas, making the whole experience an adorable one. The cheese properly melts into stringy – albeit flavourless – goodness onto the hot, crisp chips. The chicken is real meat and is served in juicy hunks. The beef is crisp edged and the chilli sauce in the 'Holy Trinity' of sauces packs a punch in chilli heat. AND they even write 'HSP :)' on the underside of the lid of the box in barbecue sauce, smiling at us when we see it. Ahh, nannas. 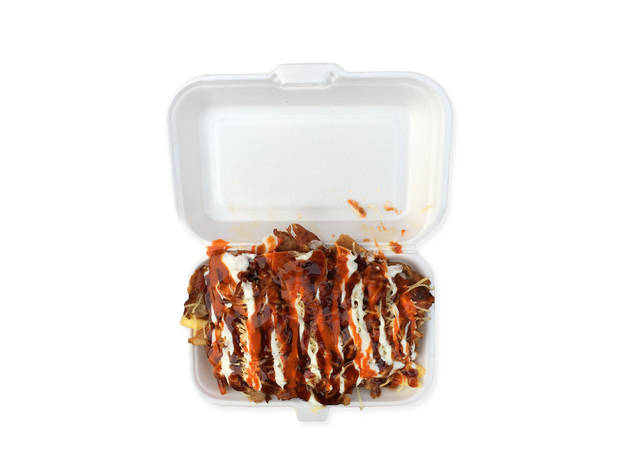 Kebab Express is situated right on the highway and is an eating outdoors/takeaway sort of joint. They do no less than seven sizes of HSPs (these guys mean business) and everyone around us is ordering them, including a group of teenage boys tearing through a pizza-box size. We order a mixed beef and chicken number and we've got to say, the meat here knocks every other HSP we've tried out of the water. The chicken in particular is crisp edged and heady with oregano. The chips are crisp and hot, so hot in fact that their residual heat manages to melt the cheese, even though it has been placed above the meat, which surprises and delights, us. The chilli sauce is hot, the barbecue spicy and the garlic yogurty and cooling. This is an HSP that is worth pulling over on the highway for. 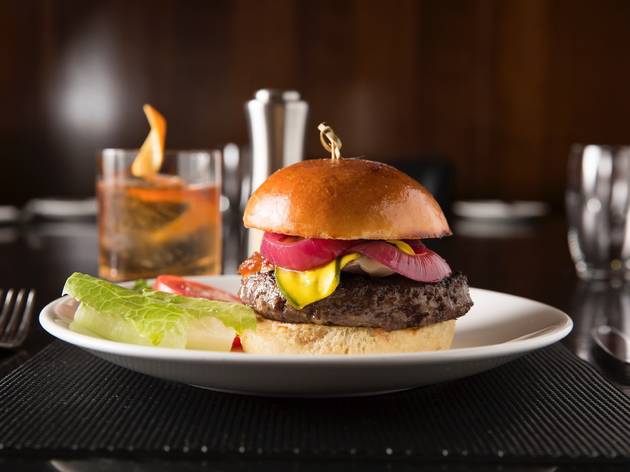 What could be more perfect than a really good burger? Nothing, that's what. Whether you like them stacked to the nines, fat-rich and salty, fried or grilled, veggie or vegan, here are the best burgers in Sydney.