Many of our big attractions are found along the waterline at Darling Harbour, so we put together a guide on the best bits of this visitor-friendly part of the city, from top ticketed exhibitons and natural wonders to Darling Harbour restaurants, hotels and accomodation. 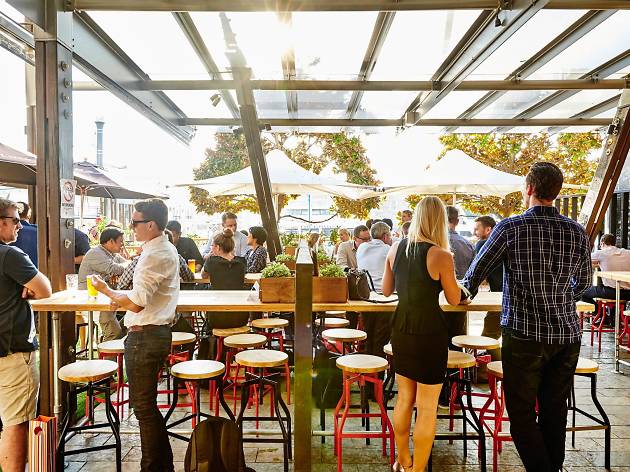 The best restaurants in Darling Harbour

Darling Harbour is definitely one of Sydney's most visitor-friendly areas, packed with hotels, attractions, exhibitions and ways to while away a day in the city. When you need to refuel for more adventures these are the restaurants Darling Harbour is known for, from the ribs at Hurricane's to fine dining at Sepia and casual waterfront bites at Beer DeLuxe. 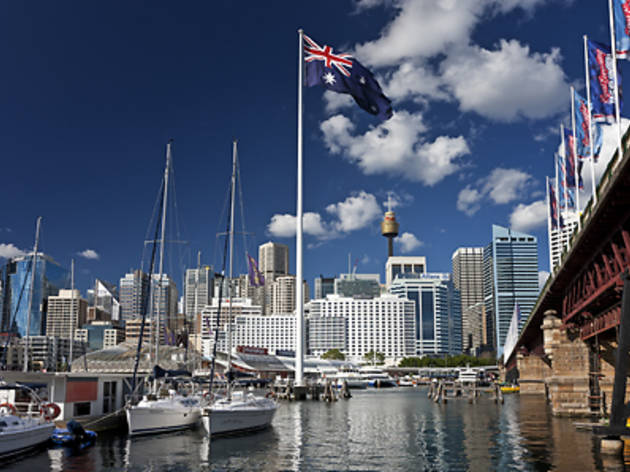 Darling Harbour accomodation is plentiful, which is probably why so many visitors to SYdney choose to base their stay around the harbour in the city. It doesn't hurt that many of the city's top attractions are located down by the water too, not to mention plenty of eating and drinking destinations. To help you on your way here is our list of the top Darling Harbour hotels for your next visit to Sydney. 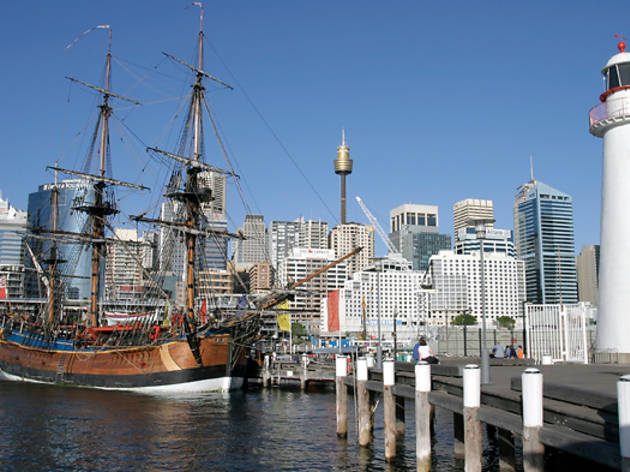 For a city whose history has always been entwined with its harbour, the sea and water travel, it comes as no surprise that this museum is one of the finest when it comes to maritime treasures. The museum’s collection captures such themes as defence, exploration, trade, adventure sport and play. The vessels on display include the submarine HMAS Onslow, the big gun destroyer HMAS Vampire and, when they're in port, the 1874 tall ship James Craig and the magnificent replica of Captain Cook’s HMB Endeavour. Yots Café (open daily 10am-5pm; 02 9298 3672) offers seafood-oriented, open-air eating at the water’s edge, while the museum store sells books, nautical knick-knacks and themed gifts. 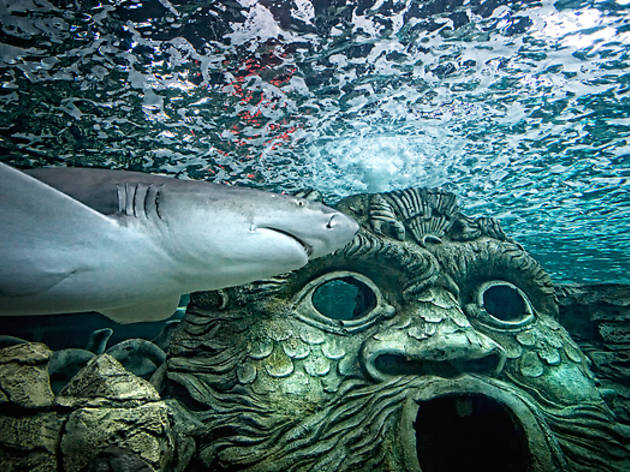 Sea Life Sydney Aquarium is the world's largest indoor system of Australian marine life, with 60 tanks and three oceanaria filled with more than 12,000 animals from 650 different species. Highlights include Shark Valley, the Great Barrier Reef exhibit, Japanese Spider crabs and the Bay of Rays. Kid's eye view My favourite bit of the aquarium is Shark Valley. I like the new design. It is like an ancient Atlantic ruin. It has a creepy head of King Neptune. Sometimes small sharks swim through the eyes. You go through a tunnel under the water with sharks and fish swimming above and around you. The tunnel seems to be made out of ancient stones. That’s cool. I really like the Spotted Wobbegong. It has whiskers. I also like the Port Jackson shark. The biggest shark in the tank is the Lemon shark. I learned that a shark’s skin feels more like sandpaper than rubber or plastic. It’s because it has tiny little teeth all over its body called denticles. Shark Valley also has the biggest stingray in the world. It’s called a Smooth Ray. I saw a Port Jackson shark in the Little Penguin enclosure. It’s in there because it is an ideal place to raise young sharks. The penguins leave the shark alone and the shark leaves the penguins alone. Port Jackson sharks don’t eat penguins, they eat crustaceans and small fish. They act like a vacuum cleaner on the bottom of the tank. The Little Penguins are the smallest penguins in the world, also known as Blue Penguins and Little Blue Penguins, 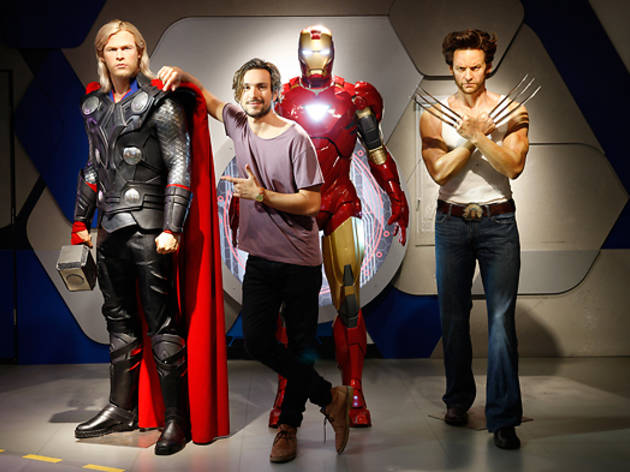 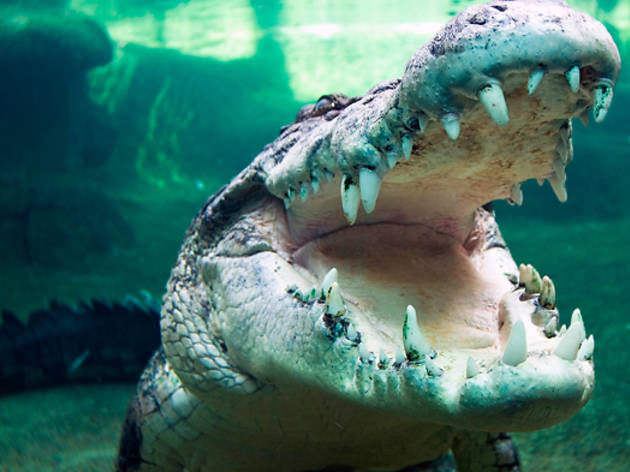 The best thing about Wild Life Sydney is handling the animals – so says our junior critic Bill Blake, who had a go holding a tawny frogmouth and a red-tailed black cockatoo, stayed on the safe side of a five-metre scrub python, got grossed out by white-lipped tree frogs (they swallow using their eyeballs, ew), and was pretty impressed by the butterfly house. For tourists – or utter city slickers – there are also koalas to cuddle, wallabies, wombats and Wild Life's 5-metre-long 700kg croc, Rex. Wild Life's daily schedule of keeper talks, animal shows and feedings should keep you busy. Exhibits at Wild Life Sydney include: Devil's Den Koala Encounters Kangaroo Walk-About Butterfly Tropics Daintree Rainforest Wallaby Cliffs Kakadoo Gorge Bugs Garden Time Out recommends booking online for savings on ticket prices. Kid's eye view The best thing about Wild Life Sydney is handling the animals. I loved it when Terry the black cockatoo sat on my shoulder. He was unusually heavy and he nibbled my cheek! He is a red-tailed black cockatoo. While he was sitting on my shoulder my brother Thom ran up and scared him away and he was very reluctant to get back on again. So I got to hold a tawny frogmouth instead. He was extremely heavy on the end of my arm. I learned that he is not an owl, like Hedwig in Harry Potter, although he does look a bit like Hedwig. But he’s not white. He has very big eyes and he’s nocturnal. I learned that owls hunt with their feet and tawny frogmouth

Need to chill out? 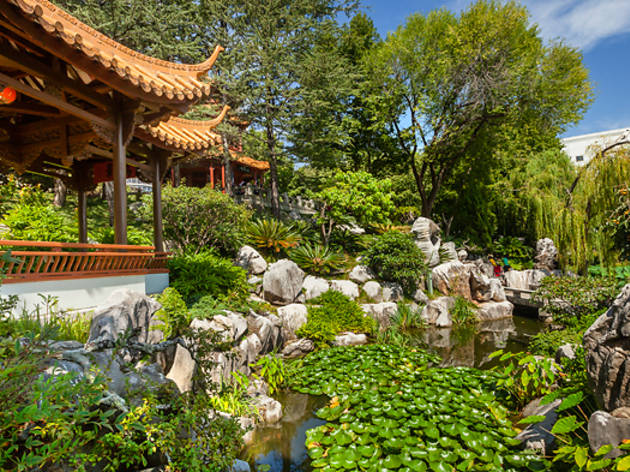 Waterfalls, weeping willows, lily pads and blossoms make this one-hectare garden a charming and calming place to visit. Officially opened in 1988, the Chinese Garden of Friendship was initially commissioned by the Guangdong Landscape Bureau in Sydney's sister city Guangzhou to reflect the bond between the two cities, and incorporates architectural principles of the Taoist philosophy of yin (calmness) and yang (activity). Featuring calligraphy, carvings and sculpture, alongside dragons and other mythological creatures, the garden transports visitors from Sydney's city of sin into a world of tradition and calm – a refreshing change from exhaust fumes and traffic. The garden is dotted with hidden treasures, including an ancient cyad (fossil plant) and the red silk cotton tree (a floral symbol of Guangdong). A highlight is the Lake of Brightness, which is full of chubby carp. Visitors who are feeling adventurous (or glamorous) can even channel Imperial China, dressing in traditional prince or princess gear, playing around in their very own Chinese palace for the day. The Chinese Garden offers oodles of zen – the perfect environment to sip your tea, savour the peace and quiet and be cocooned from the crazy city. 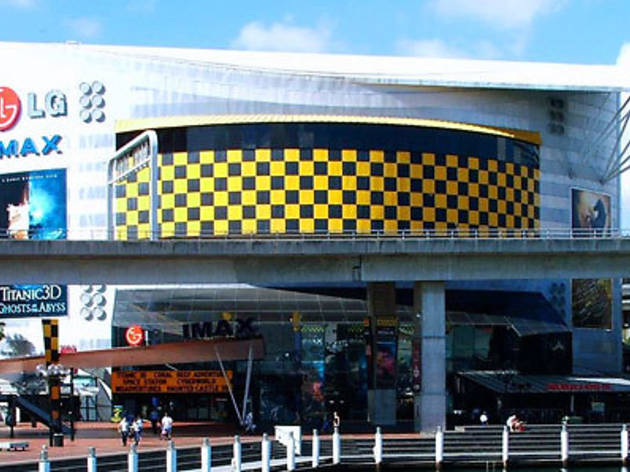 The giant, eye-shaped IMAX theatre lies between a couple major overhanging artillery roads in touristy Darling Harbour. It claims to have the world's largest cinema screen and is one of the only movie theatres to show flicks regularly in 3D. The screen towers at a ridiculous 29.42m (or around eight storeys high) and is 35.73m wide. Its theatre seats a whopping 540 people. An IMAX movie takes your regular 2D film by the balls, slaps it silly and blows it up to gigantic proportions - 10 times larger than traditional cinemas, in fact. It's literarily larger than life. While some films screened at IMAX remain in 2D, others are enhanced by an added dimension. Gone are the days where the 3D experience consisted of sitting in a dark room with some flimsy cardboard glasses precariously perched atop your nose. Nowadays, viewers are kitted out with newfangled polarised glasses. For a film to be 3D, the movie is shot with a special two lens camera and photographed on two separate sets of film. All this snazzy technology transforms what would have been a humdrum experience into something extraordinary. A trip down to IMAX is an economical way to travel through the Grand Canyon, embark on an African safari, swim through the deep blue sea or submerge yourself in the unforgiving underwater world of sharks and whales.