The 27 most brilliantly colourful places in the world

In every corner of the world, there are places that will make even the most seasoned travellers go ‘ooh’ and ‘aah’. They might be natural landmarks or manmade gardens, individual buildings or even entire towns. One thing that often unites these breathtaking destinations? Bold, intense colour – so much of the stuff you’ll go away feeling like you’ve visited some wacky sci-fi movie set, or even another planet entirely.

In the absence of IRL travel, we’ve all had to resort to other activities to feed our wanderlust over the past year or so. For many of us, this has involved unprecedented amounts of scrolling – and gazing longingly at the kinds of eye-popping technicolour destinations that would stop us in our tracks if we were there in the flesh.

Inevitably, the thrill of laying eyes on such bright, beautiful places isn’t as overwhelming in the virtual realm. But let’s be honest: it’s as close as most of us are going to get right now to roaming far and wide. So, ready for some serious #travelinspo? Here are 27 of the most brilliantly colourful places in the world, to plan a visit to… one day.

RECOMMENDED: We asked travel writers to name their favourite places on earth

Most colourful places in the world 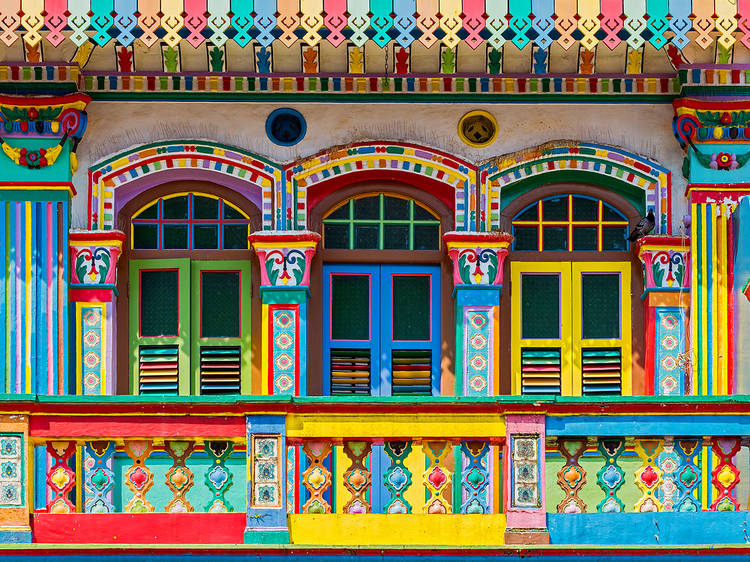 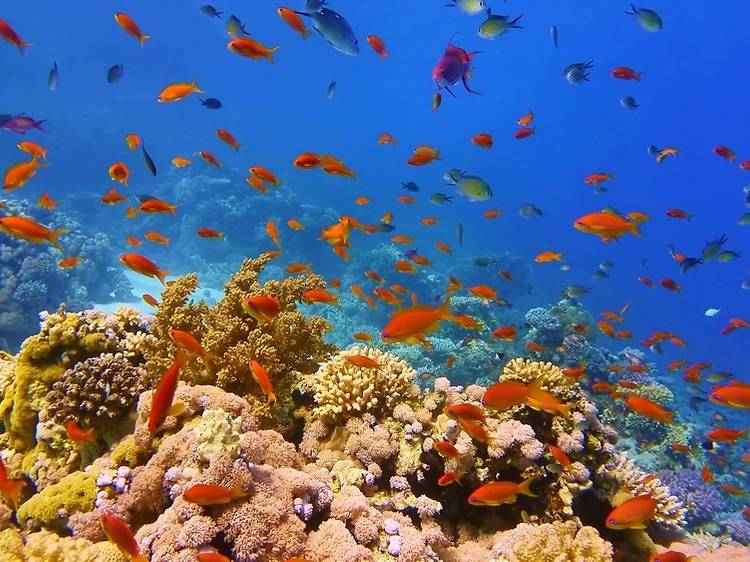 Some 600 varieties of brightly coloured coral make Australia’s Great Barrier Reef one of the most otherworldly places on earth – and also one of the most vibrant. There are some pretty dazzling fish around these parts, too. Let’s hope increasing levels of coral bleaching can be reversed by action on the climate crisis. 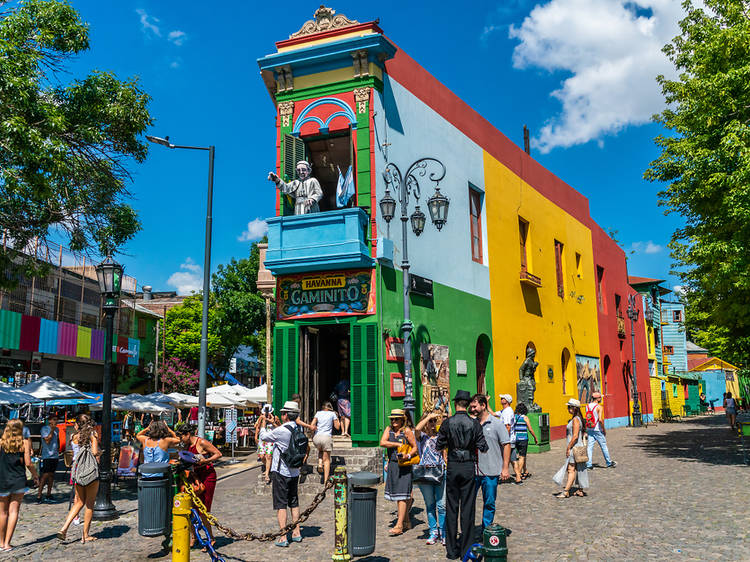 The Argentinian capital’s La Boca barrio has become a huge tourist magnet in recent years. That’s partly thanks to the industrious, world-famous tango artists that ply the Caminito high street, and partly because its many colourful houses and shopfronts are a guaranteed Insta smash. 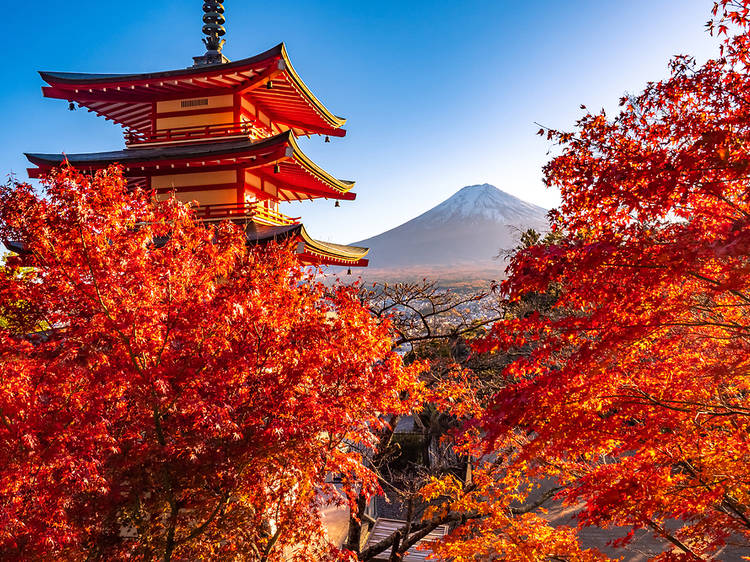 At the peak of autumn, the lakes at the northern base of Mount Fuji are a riot of yellows, oranges and reds. Peek through the maple and cherry tree leaves, and you’ll spy the white mountaintop glistening ever-bright beyond. 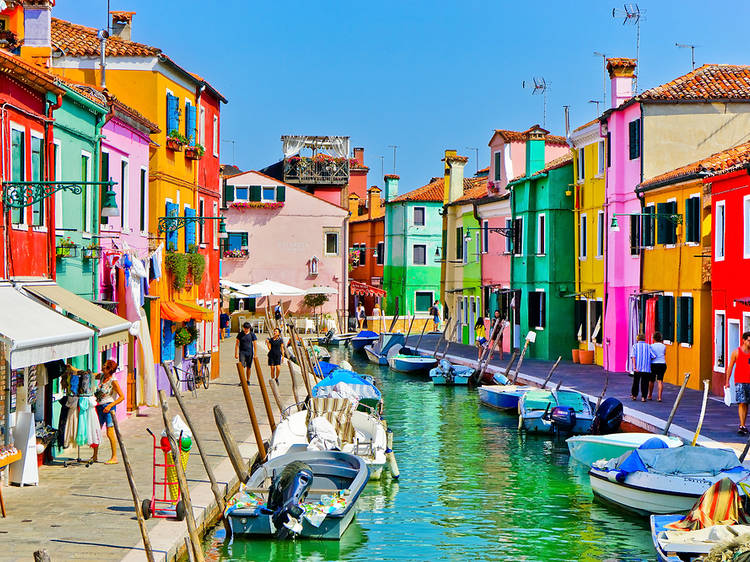 Murano may boast some pretty kaleidoscopic glassware, but fellow Venetian island Burano (yes, confusingly, they rhyme) ones up with its quaint canalhouses painted in intensely bold colours. 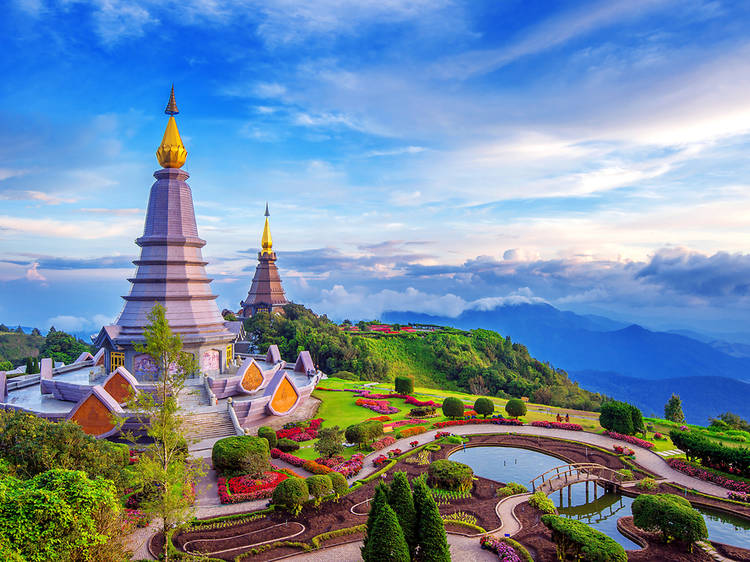 Thailand’s highest mountain, just outside second city Chiang Mai, is not only brilliant vantage point from which to survey the surrounding valleys, it’s also an eye-catching attraction itself. Two temples, manicured gardens, ponds and, if you time your trip right, cherry blossom all make this a super-radiant and super-serene place to explore. 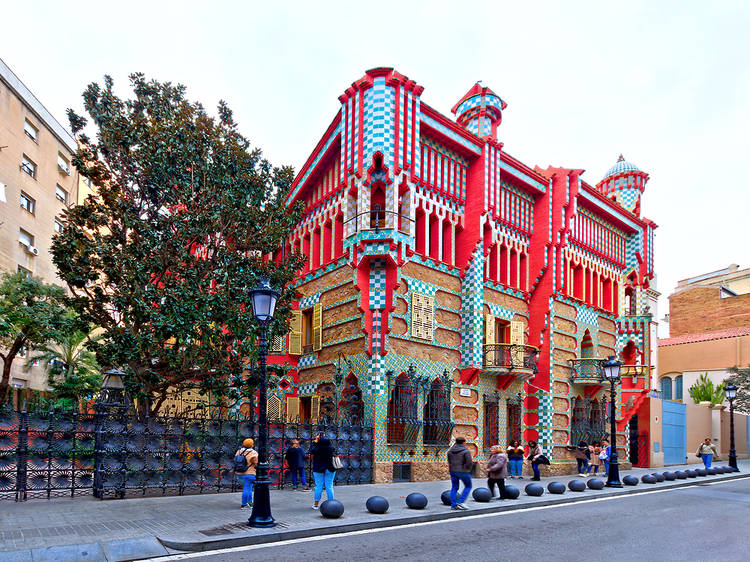 Catalonia’s most famous architect, Antoni Gaudí, was just out of university when he took on his first big job: a summer home for Manel Vicens, a local stockbroker. The intricate, tesselating exterior – a mishmash of reds, whites and blues – was inspired by Moorish architecture and the marigolds that once bloomed on the same plot. 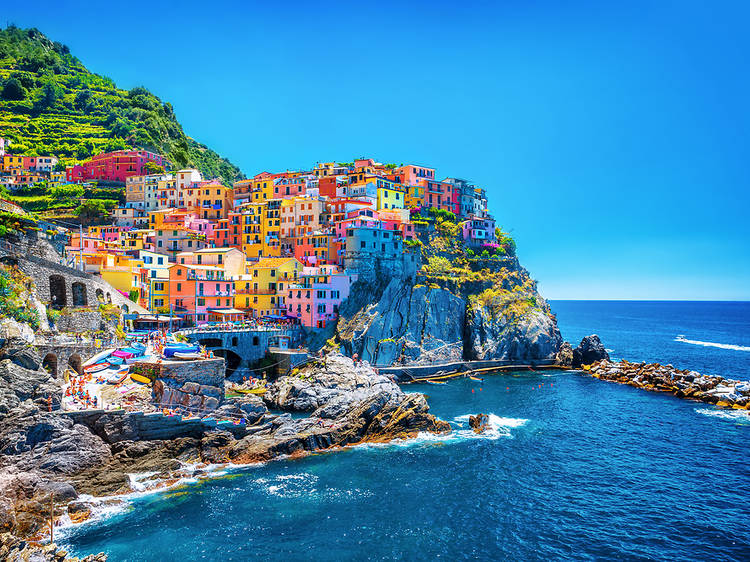 The five villages that make up this popular Italian holiday spot are the stuff of picture-postcard dreams. The best views of the teetering, lushly coloured homes are to be had from the deep-blue waters – so rent a boat, sail out and look up in awe. 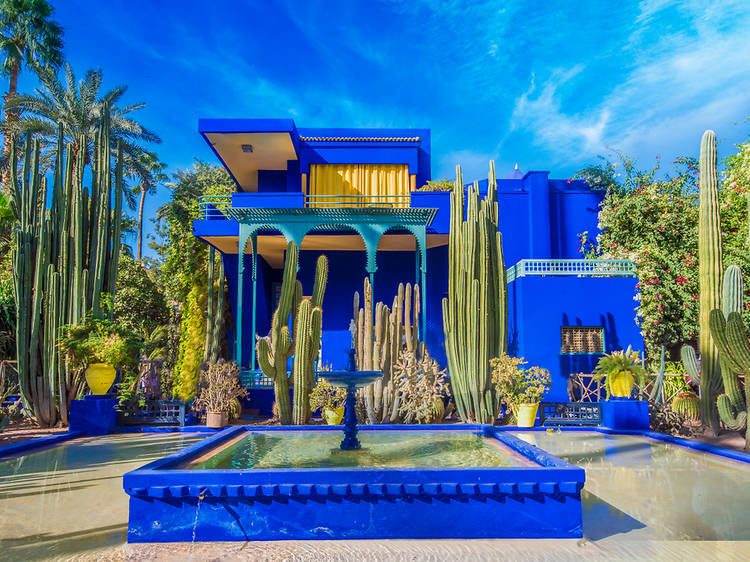 Created by the French painter Jacques Majorelle, this botanical garden in Marrakech has a majestic indigo art deco house as its centrepiece. Thanks to the blazing Moroccan sun, innumerable outsize cacti and all that brilliant blue, a walk through these gardens feels like a particularly surreal daydream. 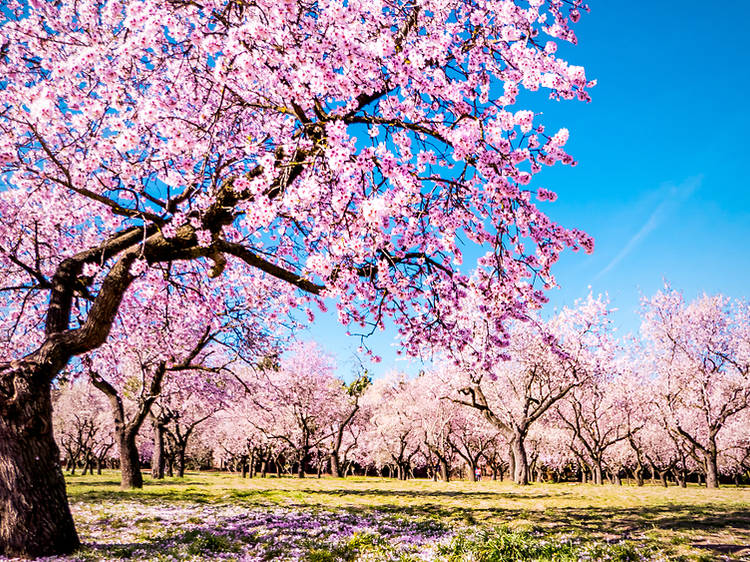 This little-known park in Madrid’s El Salvador neighbourhood is home to a wonderful array of olive, pine and eucalyptus trees, as well as various fountains and a lake. But the real stars of the show are the white and pink flowers on the almond trees, which give off a heady scent each spring. 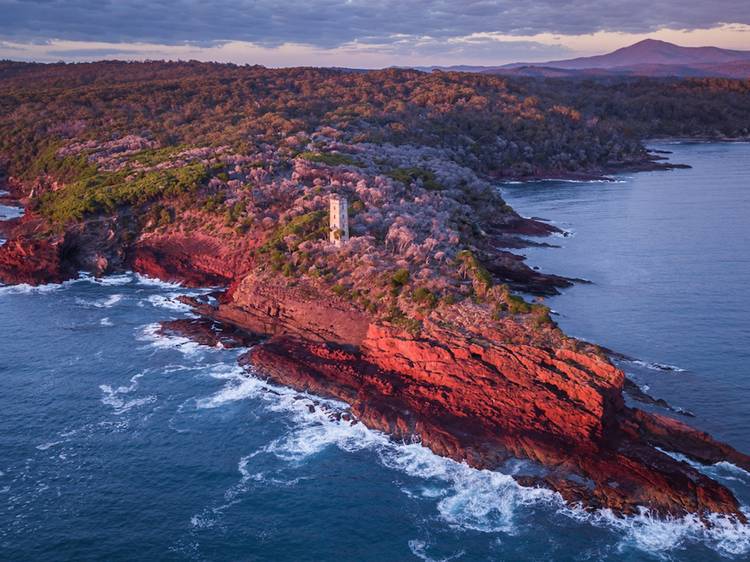 Around 500 kilometres from Sydney, this mesmerising part of the world attracts hordes of day-trippers who can’t help but fall in love with its deep crimson cliffs, dramatic waves and vibrant, shifting landscapes. 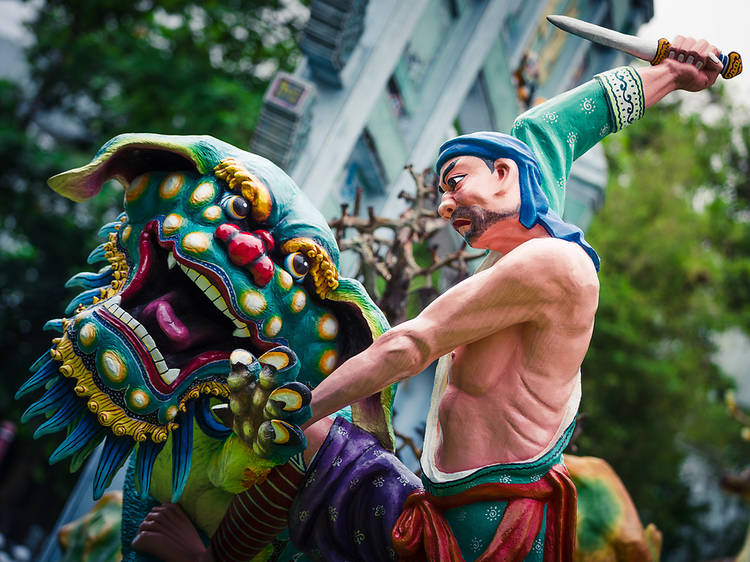 At once terrifying and impressive in scale, this outdoor theme park in Singapore holds more than 1,000 statues and 150 dioramas painted in shades ranging from subdued to incredibly gaudy. The funnest way to learn about Chinese mythology around. 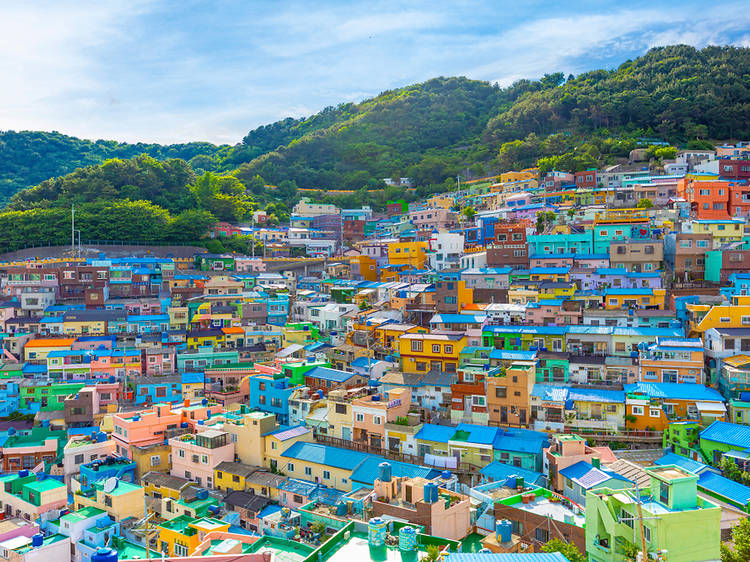 Known as the ‘Machu Picchu of Busan’, Gamcheon is a maze of streets, steep stairways, public sculptures, street art and houses painted in ludicrously bright colours. Grab a seat at one of the streetside cafés and take in the epic views over the rest of South Korea’s second city. 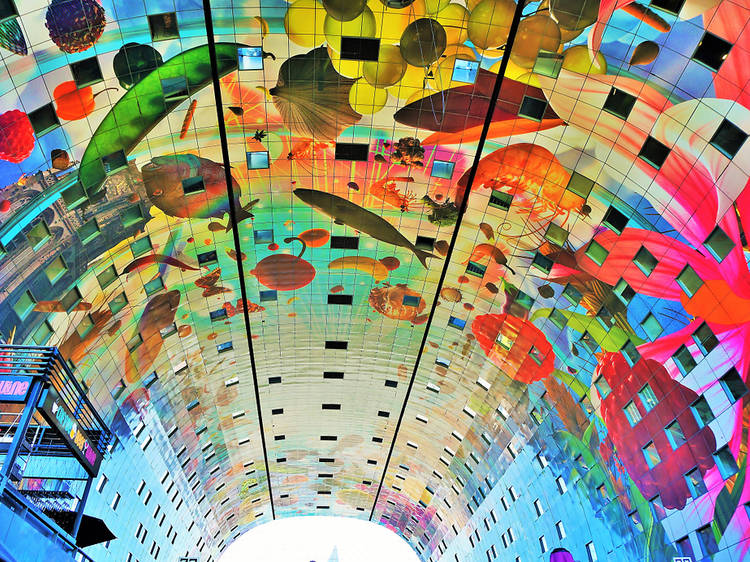 The horseshoe-shaped Markthal is one of Rotterdam’s finest works of architecture (and it has many). Perhaps most impressive is the 11,000-square-metre mural which looms over the market’s 100 food stands: it’s even earned the structure the nickname ‘the Sistine Chapel of Rotterdam’. 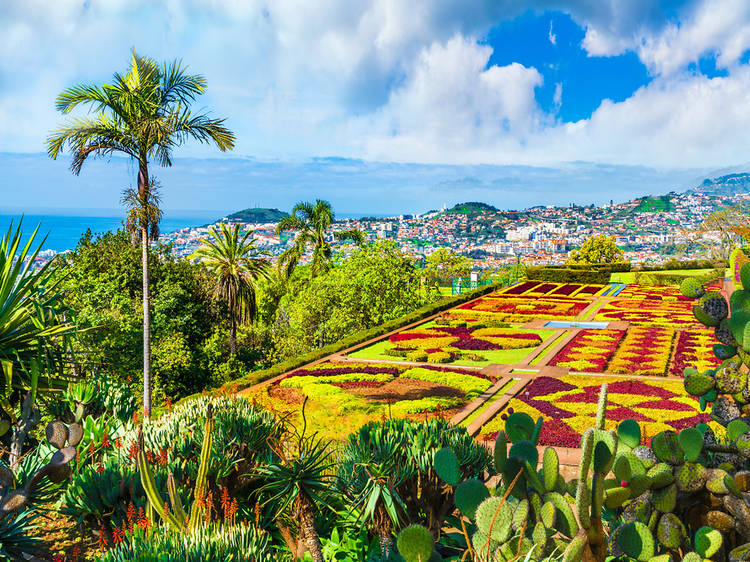 Perched above Madeira’s capital city, Funchal, this 80,000-square-metre park is filled with a sumptuous variety of plants in vivid red, yellows and purples. Want to get a bird’s-eye-view of the garden itself? Hop on the cable car up to nearby Monte. 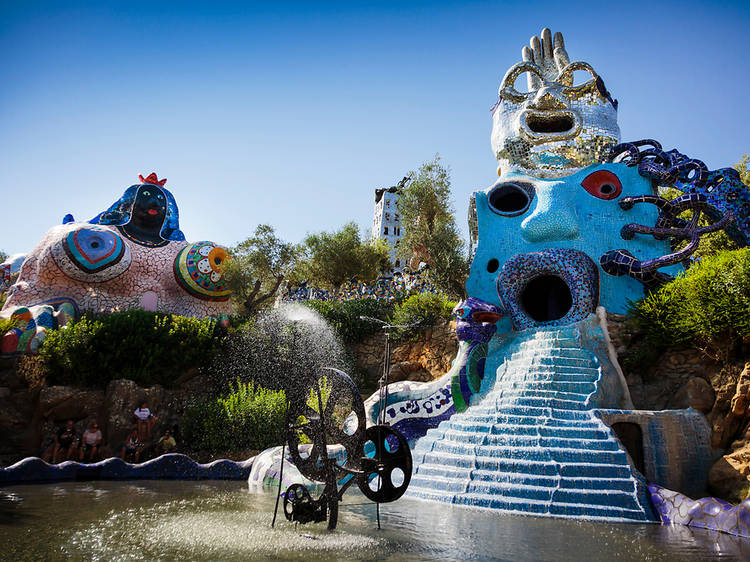 Based on the esoteric tarot and created by French-American artist Niki de Saint Phalle, this surrealist sculpture park in Tuscany is so stupendously weird even Dalí or Magritte or Carrington couldn’t have made it up. Visitors can take guided tours and even walk through some of the larger sculptures. 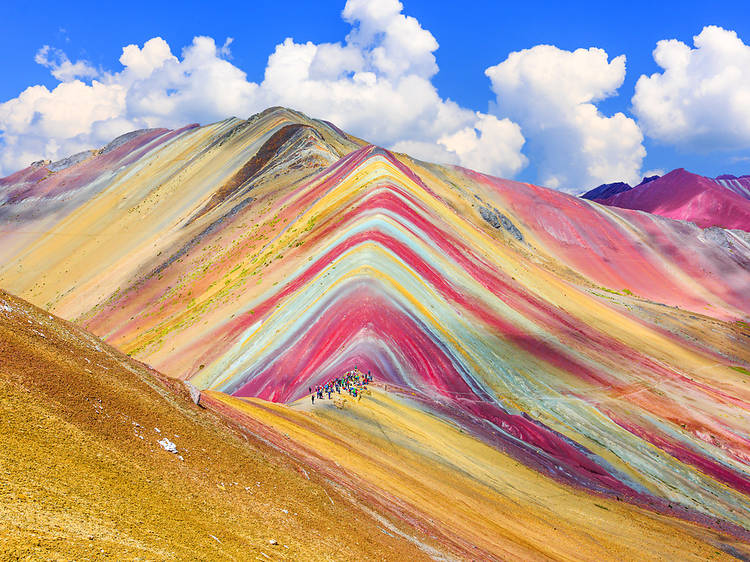 It’s a bit of a trek to make it out to this Andean mountain (we’re talking a two-hour drive and a five-kilometre hike from the city of Cusco). But boy is it worth the slog. A very particular mineralogical composition gives Peru’s so-called ‘Rainbow Mountain’ that distinctive striped look. 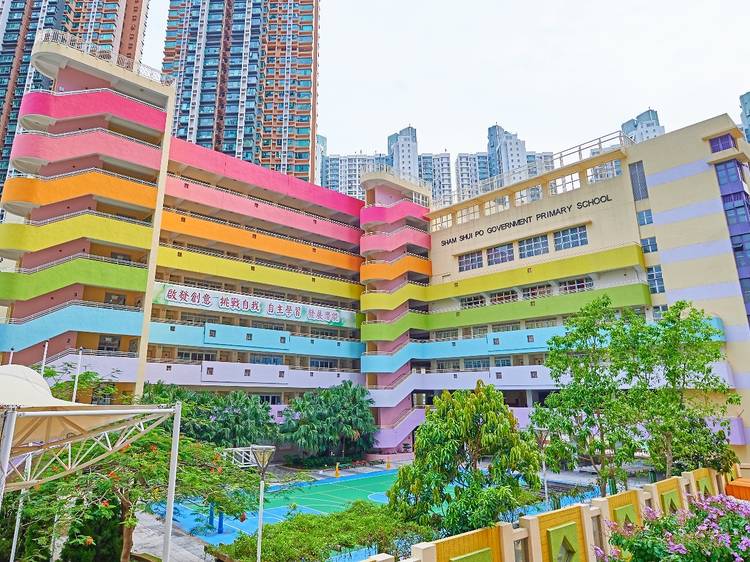 You must get a lot of street cred for being a pupil here. At Hong Kong’s Sham Shui Po Government School, the outer walls of each floor are painted a different colour, creating a beautiful rainbow façade. A footbridge over the road adds some height and depth for the perfect photo. 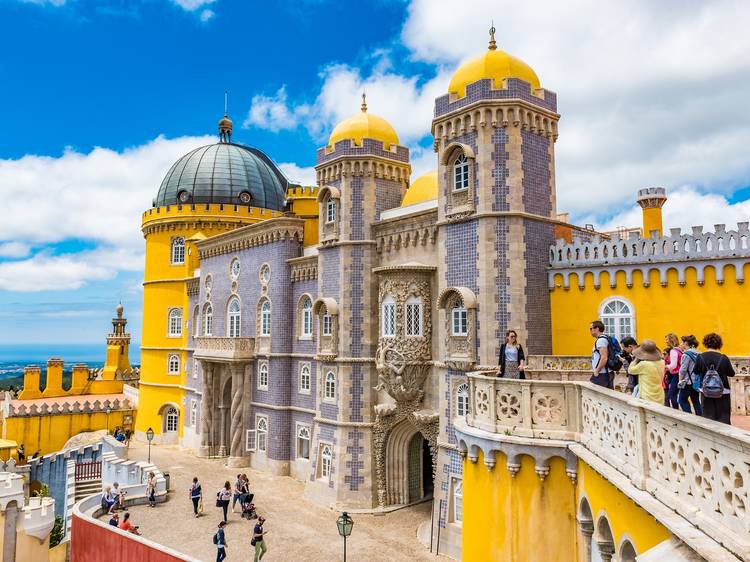 Rearing its spectacular head amid the lush foliage of the Parque da Pena, this former royal palace was a pioneering work of architectural Romanticism. Painted in dreamy Portuguese yellows and blues, it’s the one true can’t-miss attraction in Sintra, a classic day-trip destination just outside of Lisbon. 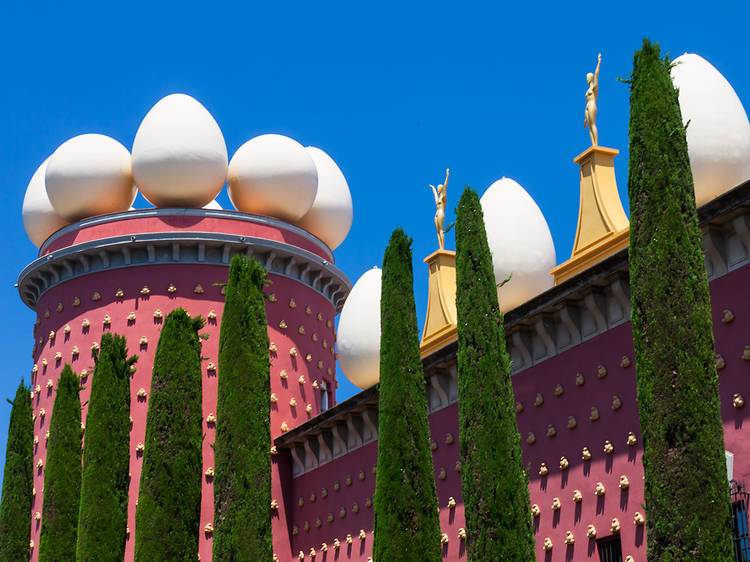 ‘I want my museum to be a single block, a labyrinth, a great surrealist object,’ Salvador Dalí once said. Wish granted: this theatre and museum in his his home town of Figueres in Spain is a huge pink castle topped with a series of giant eggs. Why not, eh? 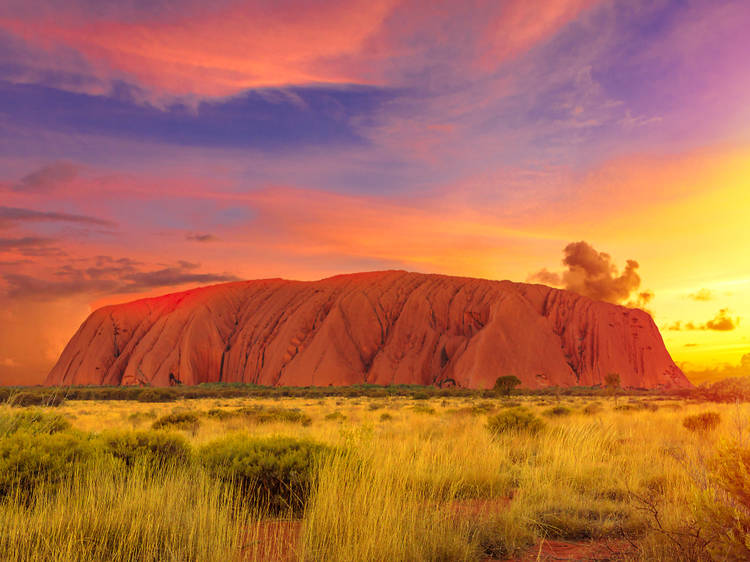 The way the light shimmers on the surface of Australia’s Uluru, it looks almost as if it’s about to transmute into some other entity entirely. You can see why the local First Nations folk view this massive sandstone monolith as spiritual. 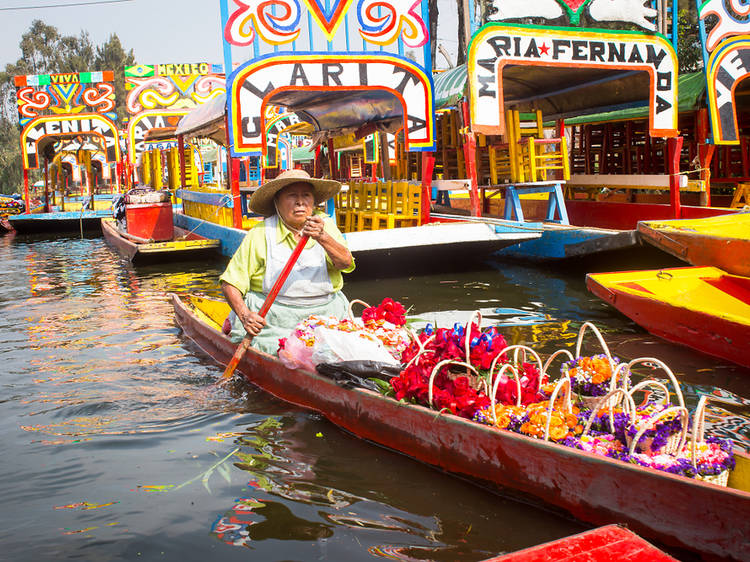 It’s difficult to know where to look when you hit the canals of Mexico City’s amphibious Xochimilco district: there’s simply so much going on, everywhere. From the chinampas (floating gardens) to the trajineras (tourist boats), this place is the embodiment of the phrase ‘riot of colour’. 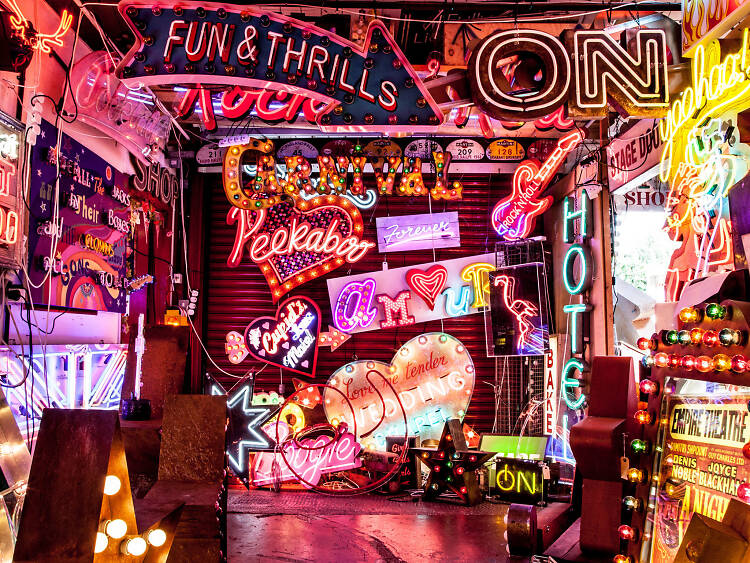 This museum of neon art showcases late artist Chris Bracey’s personal collection of work in a salvage yard in north-east London. You can expect to clock everything from his signage for ’60s sex clubs to his movie-industry pieces, including ones that were used in ‘Captain America’ and ‘Eyes Wide Shut’. 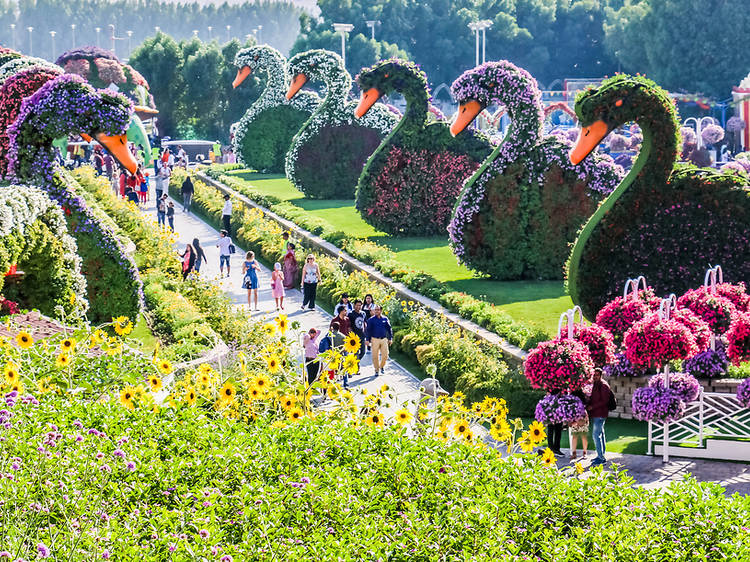 There are more than 150 million flowers in Dubai’s Miracle Garden. Yup, that’s right: 150 million. They come in every colour and arranged in themed areas ranging from the world-famous Hearts Passage to a Disney section featuring an 18-metre floral structure of Mickey Mouse. 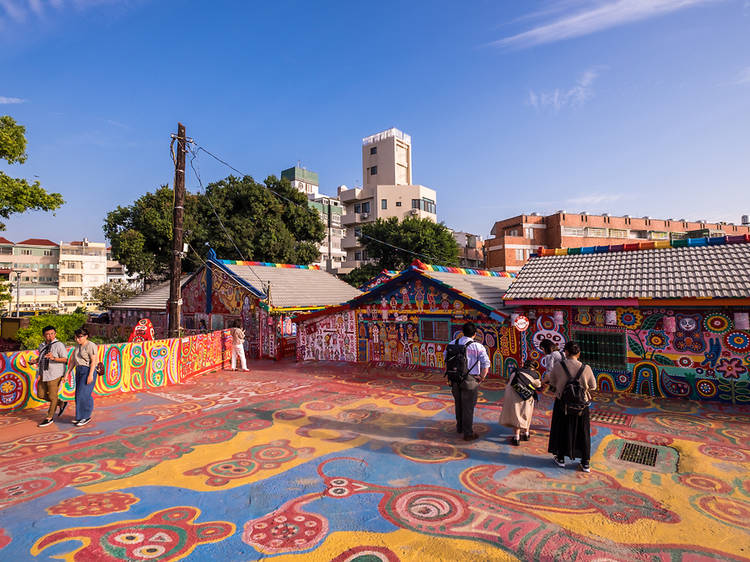 The district of Nantun, in the Taiwanese city of Taichung, is probably best known as the home of so-called ‘Rainbow Grandpa’, Huang Yong-fu, who’s spent years splashing the walls of his neighbourhood with brilliant, psychedelic colour. It only takes a few minutes to walk around, but you’ll go away feeling like you’ve just had the most vivid of dreams. 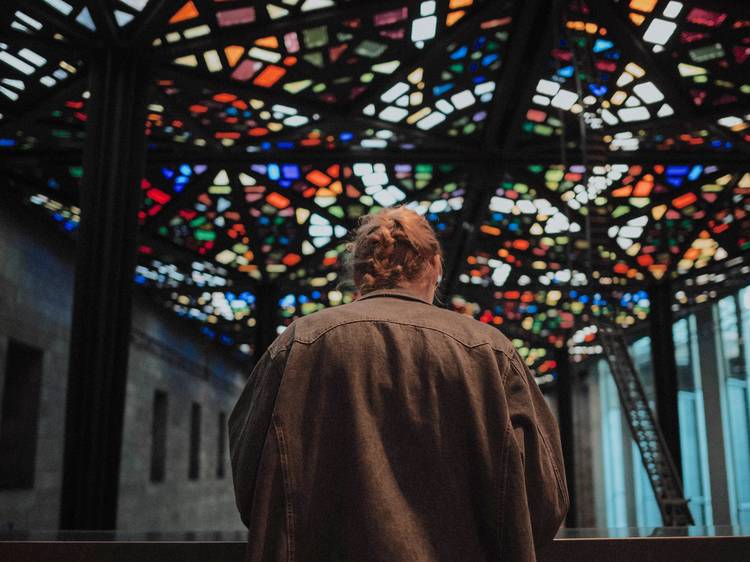 The National Gallery of Victoria doesn’t just host some of Australia’s finest art exhibitions – it also has the world’s biggest stained glass ceiling. The gallery’s glowing, mosaic-like centrepiece is the masterwork of local artist Leonard French. 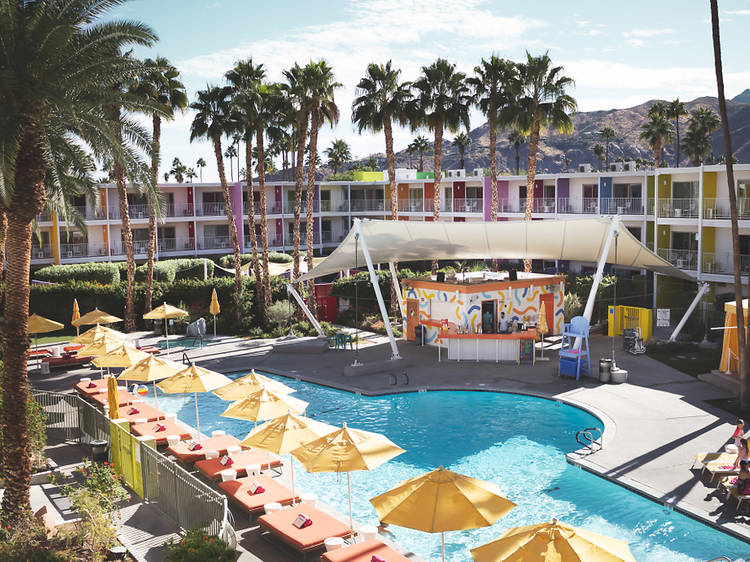 A bright, colour-blocked façade and blue bedrooms with lime furniture and purple carpeting may sound like a design disaster, but somehow this flashy hotel in Palm Springs pulls it off. Why not book in for the night, kick back on a lounger, and take it all in firsthand?

More beautiful places you should visit around the world 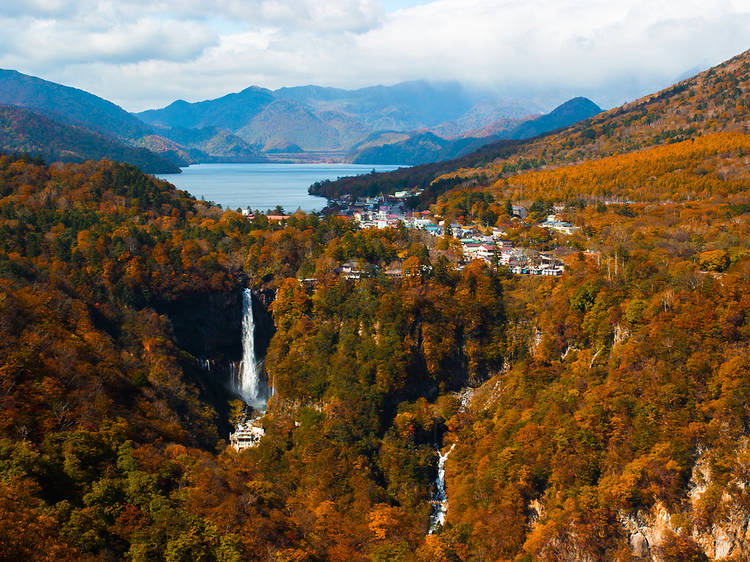 11 incredible places you should travel in 2021 (when you can)

We’re pinning our hopes on this year bringing back travel – and if it does, these are the destinations you should hit up first.