Some of Hong Kong’s most famous movies – at least abroad – belong to the action genre. Traditionally, local audiences, weaned on a diet of wuxia novels, preferred to see their heroes dispatch villains with their fists or swords. But for a decade between the mid-80s and mid-90s, guns were king. So iconic were Hong Kong’s action flicks that they became a subgenre unto themselves, sometimes called ‘heroic bloodshed’ or ‘bullet ballet’. In case you don’t know what all the fuss is about, here are 11 of the best Hong Kong action movies you need to see. 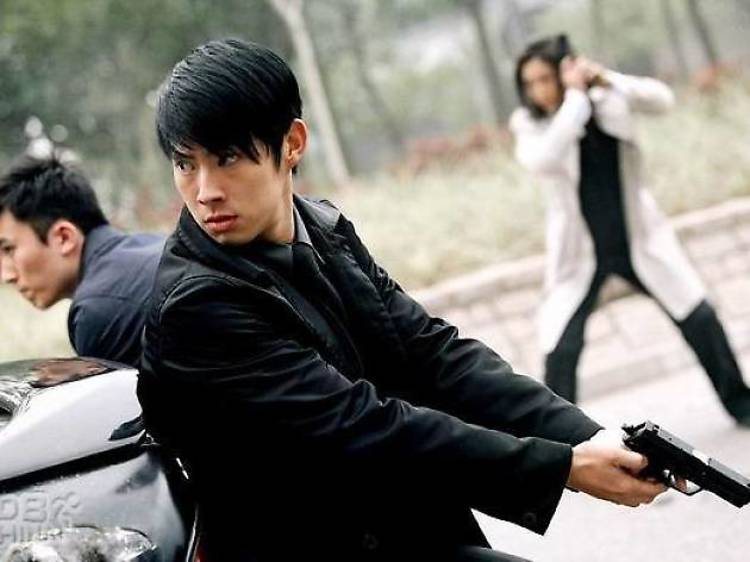 Hong Kong action movies had a fairly brief flowering, their popularity not lasting much beyond the mid-80s to mid-90s golden age. Dragon Squad, released in 2005, is a rare example of a later movie that still succeeded. Arguably the best gunplay movie made this century, Dragon Squad may not have the most engaging of plots but its hail of bullets is well choreographed by director Danny Lee Yan-Gong and successfully gets pulses racing. 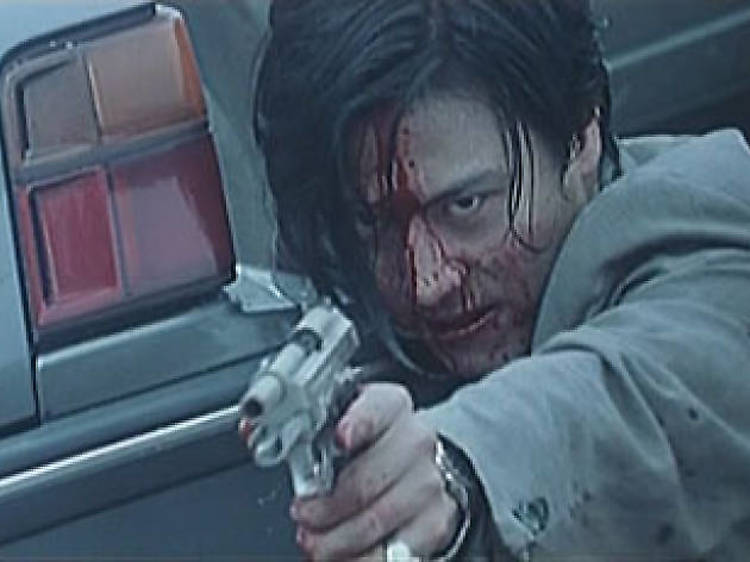 Milkyway Image’s first film is also one of its most violent. Frequently considered a female version of The Killer (more on that one later), Beyond Hypothermia was directed by Patrick Leung rather than head honcho Johnnie To, which perhaps explains the unrestrained violence. Sean Lau and Wu Chien-lien excel as the lead characters, though the film – and their relationship – feels a little rushed. The climactic shootout is grizzly and gory, but just the right side of ridiculous. 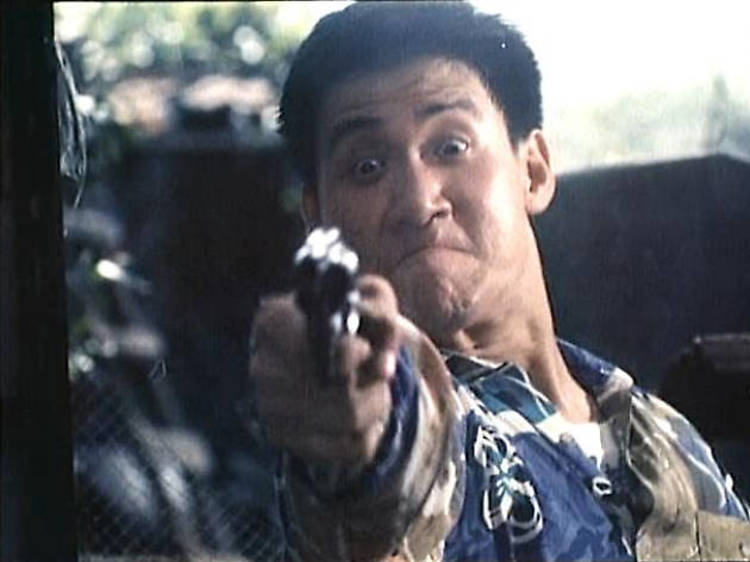 The fifth Pom Pom movie is only loosely connected to its predecessors. Gone are stars Richard Ng and John Shum, replaced by Jacky Cheung and Stephen Tung Wai, though the goofy buddy cop antics remain. At least until the last 15 minutes when the film suddenly shifts gears into one of the most stylish gunfights ever filmed in Hong Kong. Best of all is when Austin Wai Tin-chi and Lam Ching-ying face off and flick bullets directly into the chamber or kick spare magazines into their guns in order to reload. 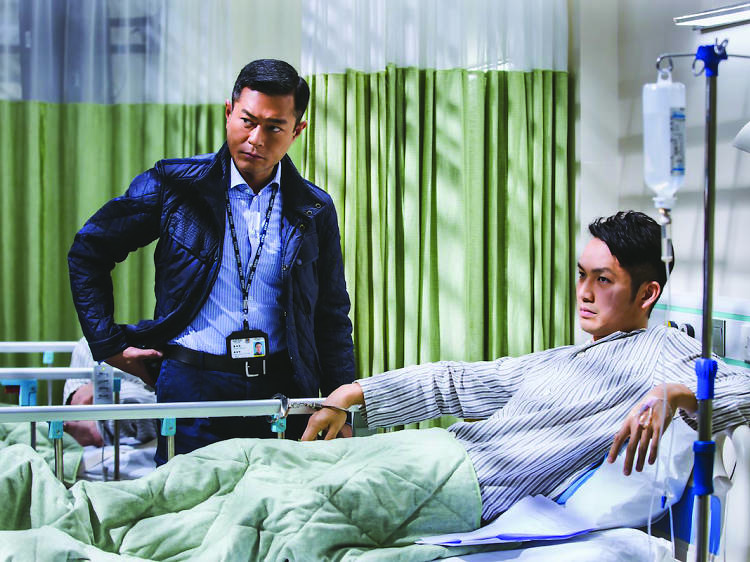 Most of Johnnie To’s triad flicks don’t stray into all-out action. For much of its runtime Three is the same, steadily ratcheting the tension as the climax builds. But what a climax. Exquisitely choreographed by To, the actors performed slow motion in real life – the film wasn’t slowed down for the shootout – allowing for fluid and dynamic shifts in movement as the characters unload round upon round. It took three months to film but the result is stunning. 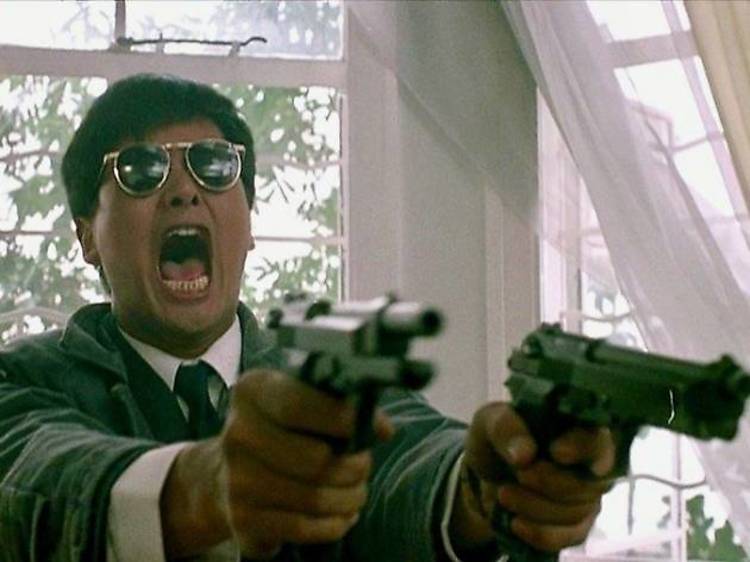 The original A Better Tomorrow is more tightly plotted but the sequel’s almighty mansion gunfight set the template for just about every great shootout director John Woo would film thereafter. Chow Yun-fat, Ti Lung and Dean Shek-tin almost literally paint the walls red with the blood of their enemies as they mow down hordes of gangsters. Chow’s confrontation with silent enemy shooter Lung Ming-yan, where, in a typically Wooian show of manly respect, they swap guns across a blood-soaked floor before continuing their duel, lives long in the memory. 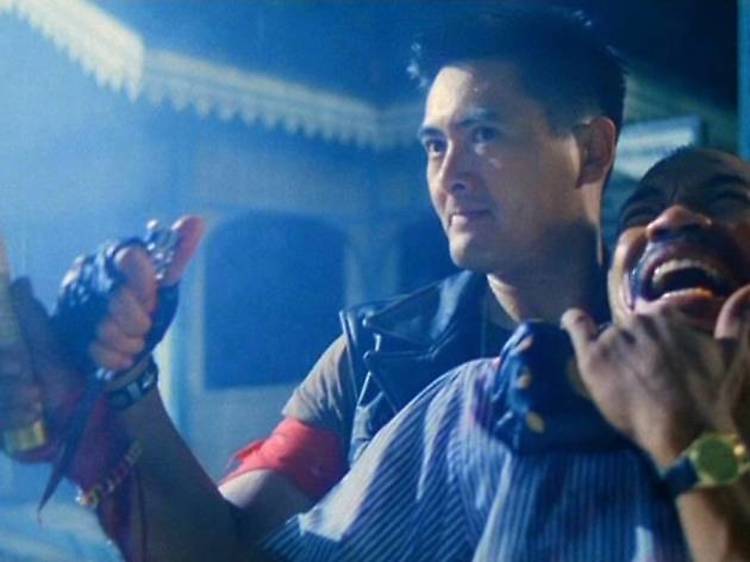 Ringo Lam is another director like John Woo closely associated with the heroic bloodshed genre. However, while Woo opts for elaborate, highly stylised shoot ’em ups, Lam prefers more realistic and gritty violence in his confrontations. Full Contact is his most successful action flick, with the gunplay enhanced by innovative use a bullet’s-eye view of the projectiles racing towards their targets. 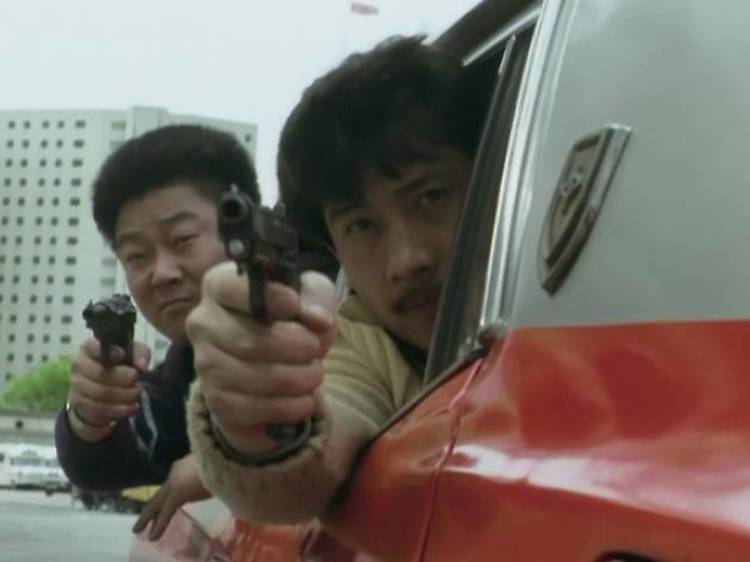 A classic, Johnny Mak’s Long Arm of the Law is widely regarded as one of the first heroic bloodshed movies – if John Woo’s films defined the style of Hong Kong action films, this one defined its substance. Released in 1984, the film is the simple tale of some Mainland gangsters who cross over to Hong Kong hoping to get rich off of a big jewellery heist. The action is straightforward and brutal, and the climactic chase scene, filmed in the now demolished Kowloon Walled City, is an audacious, claustrophobic masterpiece. 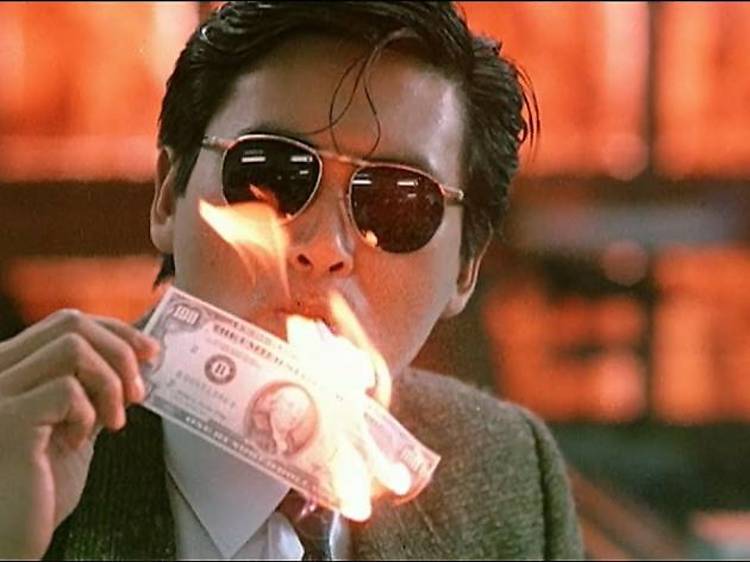 If Long Arm of the Law is the film that kick-started the action genre in Hong Kong, A Better Tomorrow took things to another level. Released two years after the former, John Woo’s breakthrough movie remains one of the best Hong Kong films ever made. The violence is still relatively basic – though Chow Yun-fat’s brief restaurant shootout hinted at what Woo was capable of – but few action films feature such memorable characters as Chow’s uber-cool Mark, his brother-in-arms Sung (Ti Lung) and young hothead A Git (Leslie Cheung). 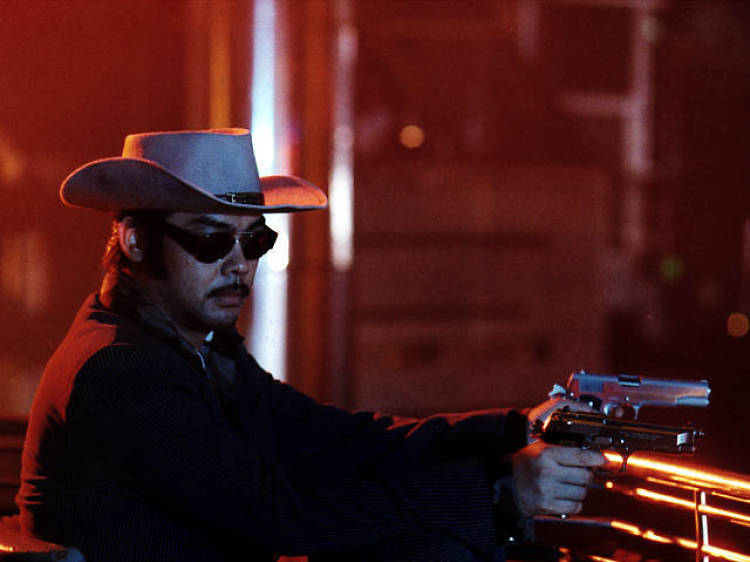 Johnnie To’s finest entry in the heroic bloodshed canon sometimes feels like the director is trying to out-John Woo John Woo. Some critics consider A Hero Never Dies a sly parody – Sean Lau’s role in the final shootout is either the highpoint of loyalty or simply absurd. There’s double handguns, male bonding (to the detriment of relationships with women), honour, betrayal, bullets flying everywhere and inevitable bittersweet deaths. Taken at face value, as we like to do, the film is a last-gasp portrayal of those heroic archetypes late 80s and early 90s Hong Kong cinema became famous for – and we love it for it. 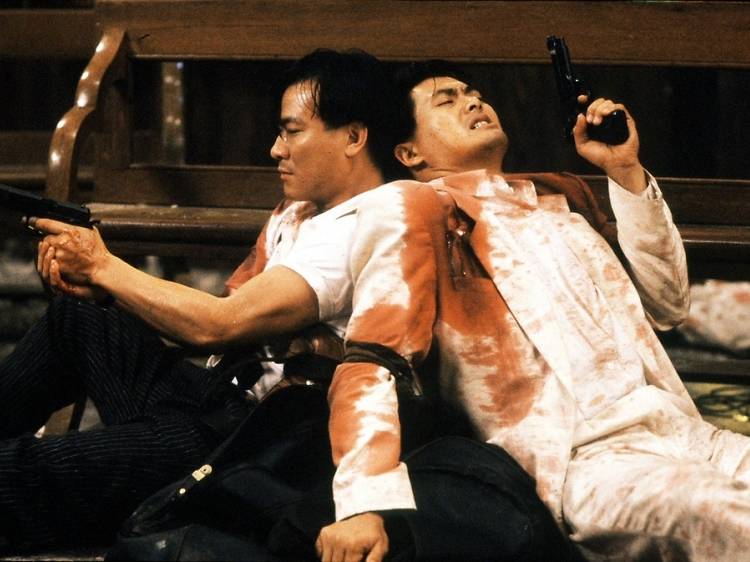 A phenomenal piece of filmmaking, The Killer helped make John Woo’s name in America and paved the way for his later work in Hollywood. Possibly the finest mix of action and characterisation committed to celluloid, the film is a gangster movie turned into pulp opera. Hitman Chow Yun-fat and policeman Danny Lee are mirror images of one another, the only difference between them, a cop’s badge. More than two decades on, the film’s final battle in a church remains one of the best action sequences ever filmed. 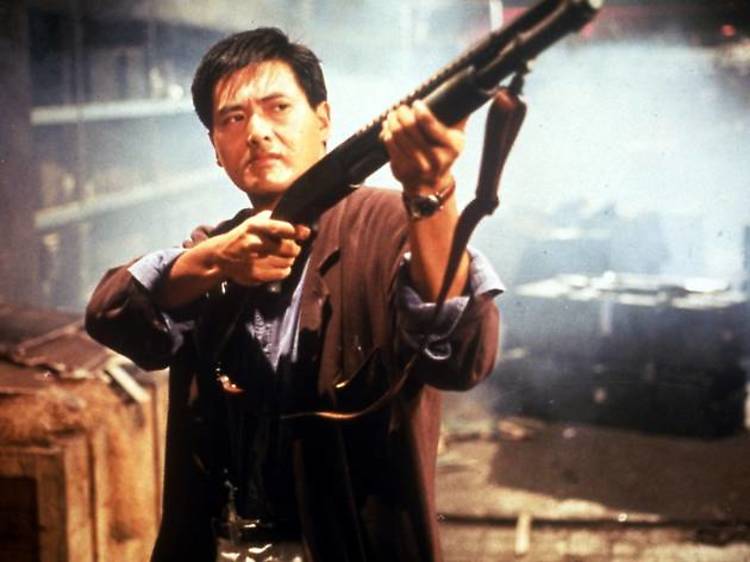 John Woo’s last film before his years spent in Hollywood might not stoke the emotions as much as The Killer but in terms of all-out action, nothing surpasses Hard Boiled. From the opening gunfight in a tea house – complete with Chow Yun-fat sliding down a staircase firing away with twin pistols – to the hospital climax (Chow somehow managing to demolish an entire building with bullets alone), this is the highpoint of Hong Kong action cinema. There’s a decent plot in there too, with Tony Leung Chiu-wai in a pre-Infernal Affairs role as a deep undercover agent, but it’s really not as important as the spectacular action sequences. 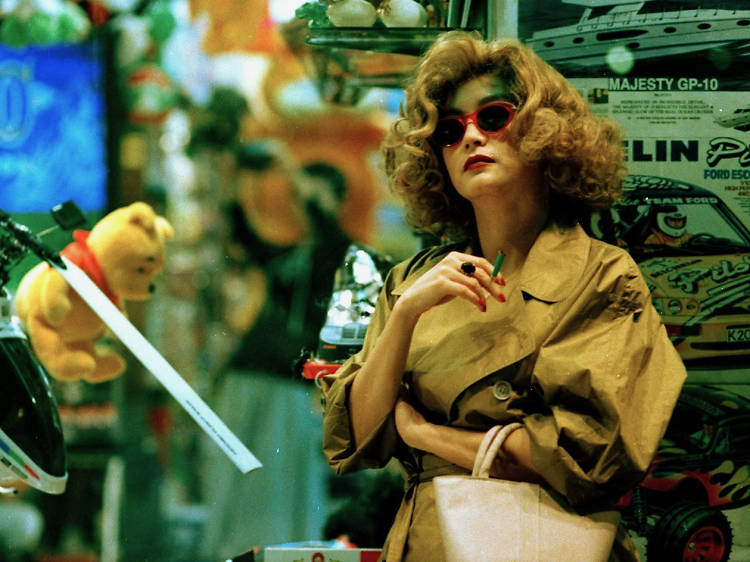 Whatever your take on his films, Wong Kar-wai is undoubtedly the most famous Hong Kong director of his age. Join us as we rank all his locally made films, from the least impressive to the best.