A world beyond curries

Hong Kong is no stranger to Indian cuisine but beyond vindaloos and saag paneers, there’s also a whole subcontinent of foods and flavours that deserve our attention. This vast expanse, also known as South Asia, encompasses a wide range of climates and cultures, and the food in one region can taste worlds apart from that in another. From momos from Nepal to spicy sambols from Sri Lanka, get a taste of the rich history, spices and dishes of the Indian subcontinent at these fine restaurants.

New Punjab Club (pictured above) made headlines last year when it became the first Punjabi restaurant in the world to be awarded a Michelin star. While the restaurant celebrates the opulence of the post-colonial era – think plush leather banquettes, a gin trolley and hand-polished Damascus steel cutlery – the food is, at the very heart of it, simple and rustic. This culinary ethos reflects the humble agrarian roots of Punjab, a region comprising parts of northern India and eastern Pakistan. Blessed with fertile soil, inhabitants of the region have long made use of whatever the land has provided. At New Punjab Club, executive chef Palash Mitra and his team do the same by highlighting locally sourced fish and meats with spices that accentuate but never overshadow core flavours.

Aside from the simplicity of ingredients, cooking methods are also markedly unfussy. “The rest of India managed to do this slow-cooked curry thing but Punjabis just didn’t do it,” says Mitra, explaining that a history of invasions meant that there was little time for people to labour over complex, multi-step recipes. The culinary canon here is dominated by dishes that are quick to cook and easy to eat – dishes like kebabs, which are skewered and cooked over the high-intensity flames of a tandoor oven. Meanwhile, the presence of foreign influences – from nearby Central Asia, the Middle East, as well as from the west – add further layers to Punjab’s culinary landscape, resulting in a richness and diversity of flavours unlike any other cuisine on the subcontinent.

Keema pau
This popular street food was created as a way to use up unsellable offcuts. It’s usually made with mutton or lamb, which would be minced and slow-cooked with spices. It’s most commonly eaten with pau – a sweet and fluffy bread roll that traces its origins to the Portuguese – since it’s cheaper and easier to make than tandoor-cooked naan. At New Punjab Club, it’s served with a rich, brioche-like milk bun.

Murgh tikka angar
This dish is made with local chicken, chosen specifically for its high fat content, which allows it to stay moist in the tandoor. The bird is brined in spices so that the flavours penetrate all through the meat. It’s served with a hummus-like chicken liver and fig chutney – a dish born during times of warfare. “Fighters had limited rations so they used every part of the animal,” says Mitra. The liver is cooked with figs because the fruit is very prevalent in the jungles, especially in the Pakistani side of Punjab.

Tandoori machli
Embodying the Punjabi philosophy of eating locally, the star of this dish is a firm-fleshed cobia that’s line-caught in Sai Kung. The fish is prepared in just a few steps. It’s first marinated with simple seasoning and then coated with a rub of yoghurt, chillies and carom seeds. It’s then cooked for just a few minutes until the flesh is moist and the skin is crisp. It’s simple but exceptional. 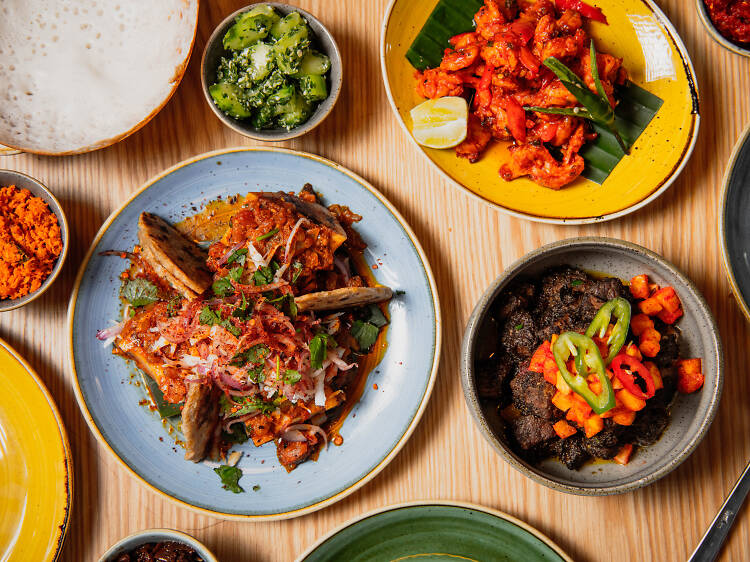 “There are no rules to how we cook,” chef Gisela Alesbrook says of the food from her home country of Sri Lanka. Even recipes that have been passed down for generations can be tweaked, ingredient quantities changed, according to individual tastes. This free-spirited approach to eating is the inspiration behind Hotal Colombo – a lively dining space decked out in a Wes Anderson-esque palette of pastel pinks and blues. Behind the kitchen, Alesbrook and her team recreate dishes that she grew up eating in Sri Lanka. Although the island country lies just a short distance away from southern India, its preference for fast-cooking, often in the form of stir-fries, and the use of tomato or coconut milk instead of dairy results in an overall flavour profile that’s much lighter and fresher. The food still packs a heady punch though. Take devilled dishes for example, so named for their bright red tomato-and-chilli hue. They’re spicy, moreish and perfect with alcohol. Then there are the karis, the Sri Lankan equivalent to curries. At Hotal Colombo, every kari is slightly different, from the sour-leaning fish kari to one with peppery black pork. Going back to Alesbrook’s “no rules” ethos, these dishes can be eaten any way, whether it’s with rice, pancake-like hoppers or with any of the chutneys and sambols on offer. You can’t go wrong.

Hopper and sambols
Made from fermented rice flour and coconut milk, hoppers are bowl-shaped pancakes that are crispy on the outside and soft and pillowy in the middle. Perfect blank canvases for a range of accompaniments, they’re seen as an alternative to rice and are often eaten for breakfast and dinner with kari or sambols.

Devilled shrimp
“Anything can be devilled,” says Alesbrook, but this sweet and spicy mix of tomatoes, chilli, ginger and garlic lends itself particularly well when sautéed with fresh shrimp. Warning: may be addictive.

Black pork kari
This dry kari gets its dark tint from a combination of roasted curry powder and a lot of freshly crushed peppercorns. The latter is what gives this chilli-free dish its heat.

Bone marrow varuval with pol roti
This short eat (a snack enjoyed before the main meal) is a rare instance of slow-cooking on the Hotal Colombo menu. The bone marrow is braised in stock and coconut milk then smothered in a rich sauce balanced with grated coconut and Asiatic pennyworth. Small roti made from coconut, onions and chilli are used to scoop out the goodness. 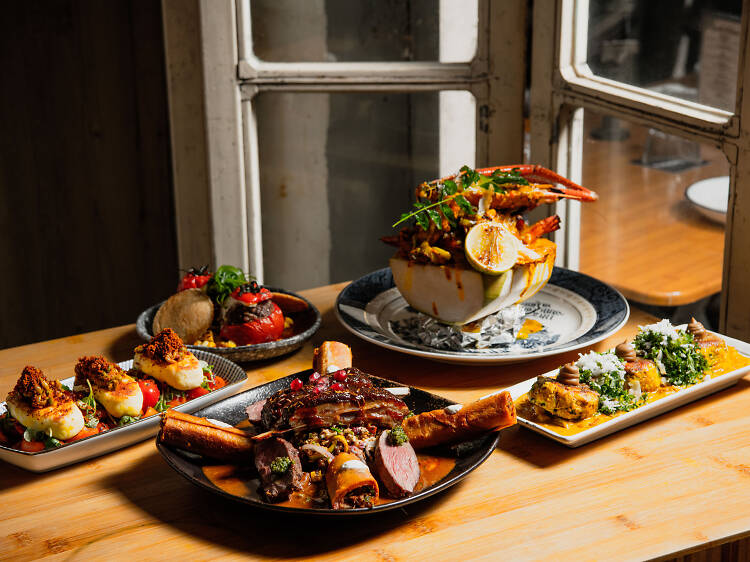 Since opening its doors in 2017, Blacksalt’s chef Taran Chadha and his wife Sheela have brought their own reimagined flavours of the Indian subcontinent to diners in Sai Ying Pun. The menu includes riffs from all over, from the North Indian-inspired lamb rhapsody to a creative take on Bhutan’s famed ema datshi cheese and chilli dish that draws on Chadha’s background in French cooking. “The dishes at Blacksalt are a combination of travelling, cooking as a chef and growing up with mom’s cooking,” Chadha says of his approach.

Late last year, the restaurant introduced a regularly changing Great Escapes menu, which focuses on a different part of the Indian subcontinent every few months. The last menu was inspired by Bengal while the upcoming one, launching on March 27, is influenced by the flavours of the Maldives. “The way we cook here is not traditional but we try to keep the spices authentic,” says Chadha. “We take recipes and find ways to put our own stance on them, to modernise them.”

What’s the matter paneer?
While curd is extremely common in Indian cooking, Blacksalt’s homemade version is less like traditional paneer and more like a mix between fromage blanc and buffalo mozzarella. It’s topped with Chadha’s take on gunpowder spice – a famous blend from south India – and grape tomatoes marinated in merlot vinegar.

Lamb rhapsody
“This dish is more north Indian, because of the korma style of curry,” Chadha says. Aside from the aromatic roasted rump korma, which is thickened with nuts, the multi-element dish also includes tender barbecued ribs and crispy roti rolls filled with lamb shank. 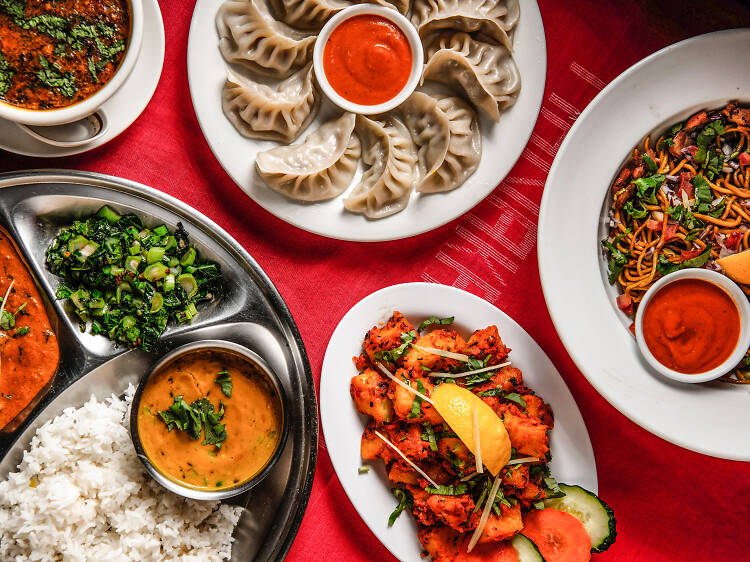 Manakamana on Temple Street has won plenty of accolades, including Tripadvisor’s Certificate of Excellence and the quality merchant accreditation from the Hong Kong Tourism Board. Named after a famed temple in Kathmandu, this humble, family-run restaurant offers authentic Nepalese fare – a light and subtle cuisine that draws influences from all across Asia. Mustard oil is most commonly used in the preparation of dishes and popular spices include fenugreek and cumin. Although there are some similarities to Indian cuisine, owner Sunita Rai, a Kathmandu native who came to Hong Kong 18 years ago, says that Nepalese food is not as heavy. In fact, parts of the cuisine taste closer to Tibetan and Chinese cooking, as demonstrated by dishes such as the fried noodles and momo dumplings, both served with a spicy tomato-based sauce flavoured with Sichuan peppercorns.

Momos
Perhaps the most well-known of all Nepalese dishes, momos are actually heavily influenced by Tibetan cooking. Filled with mildly spiced minced meat or vegetables, these dumplings can be steamed, fried or sautéed with tomatoes and chillies. The steamed iteration is the most common since it can be easily made at home. “This is a special dish. If you are with your family or friends, you’ll come together to make momos,” says Rai.

Chaumin
One could be forgiven for mistaking this for a Cantonese dish. Unlike Chinese chowmien though, Nepalese chaumin is flavoured with spices such as bay leaves, fenugreek seeds, cardamom, cinnamon, fennel seeds, cloves and cardamom. A spicy tomato sauce and fresh wedges of lemon help brighten things up.

Nepalese thali
Manakamana’s thali set showcases the Indian influences in Nepalese cooking. The soul of this dish is the dal and steamed rice – one of the most fundamental meals eaten throughout the country. The lentils and rice are accompanied by a choice of curry, chopped leafy greens sautéed with garlic and cumin, and a spicy achaar (ie pickle) spun from chillies, garlic, tomatoes and fresh coriander leaves.

Aloo dum
This humble dish is made with potatoes that are boiled then tossed in a fragrant and ever-so-mildly spicy mixture of fenugreek seeds, garlic, ginger paste, black and white sesame, chillies and tomatoes. Rai calls it her personal favourite dish. “For those who drink alcohol, this is very good,” she says.

Eat your way around the world 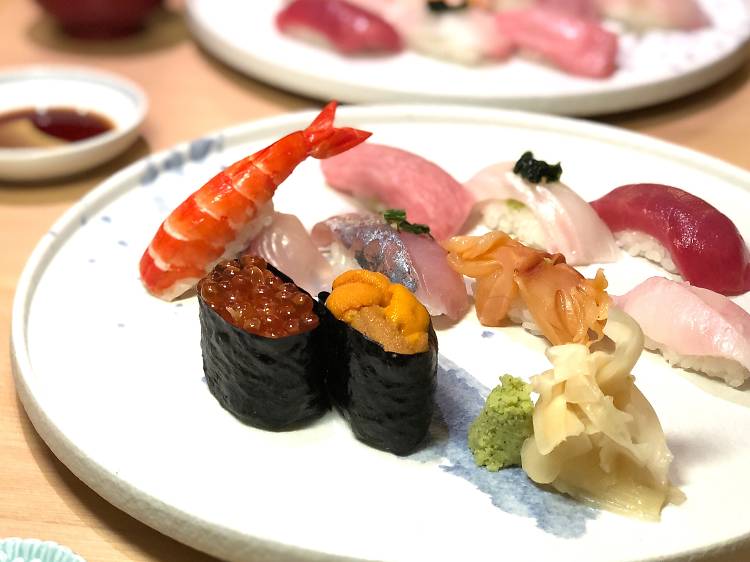 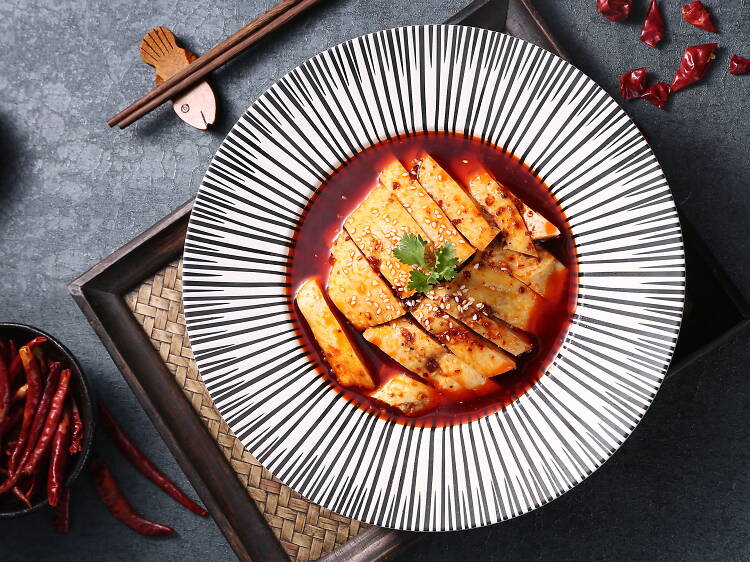 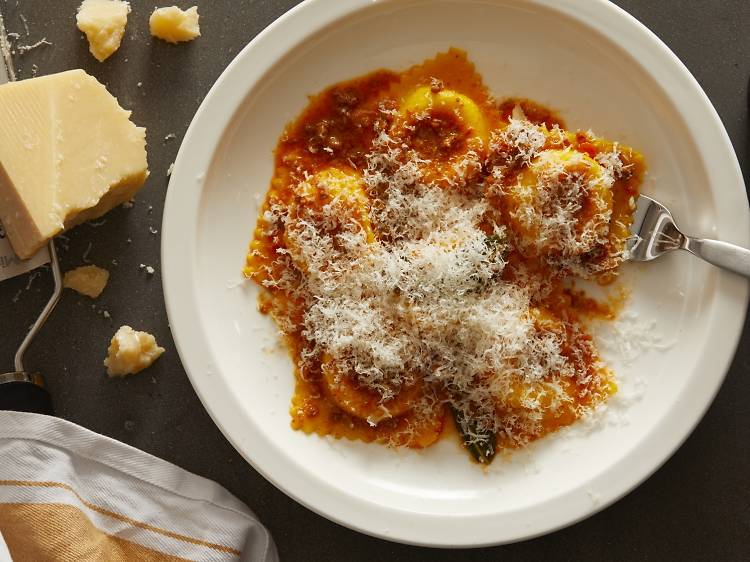