Our restaurant scene is now back on the mend after some hard times as of late. Through the struggles that were felt around the city, delivery experienced a surged in popularity that still has plenty of momentum. Sun Tung Lok is among the most-decorated restaurants in the city to offer delivery, and so we thought we’d review this 51-year-old, two Michelin-starred Tsim Sha Tsui institution, to assess to what degree its delivery service does the award-winning food justice.

After having our meal delivered by an immaculately suited gentleman, we dug into the starter of stuffed crab shell ($198), an exoskeleton of the famous crustacean stuffed with crab meat, onion, and mushrooms, all baked to a golden crust. The thing that hit first was the textures; if the initial, satisfying crunch of the crust didn’t get our mouths watering, the bounce of the succulent mushroom chunks and tenderness of the meat certainly did. As for flavour, think savoury, moreish, goodness somewhere between crab cakes and meat pie, with the onions working their magic at the end to add a gentle sweetness that rendered this dish far from crabby. 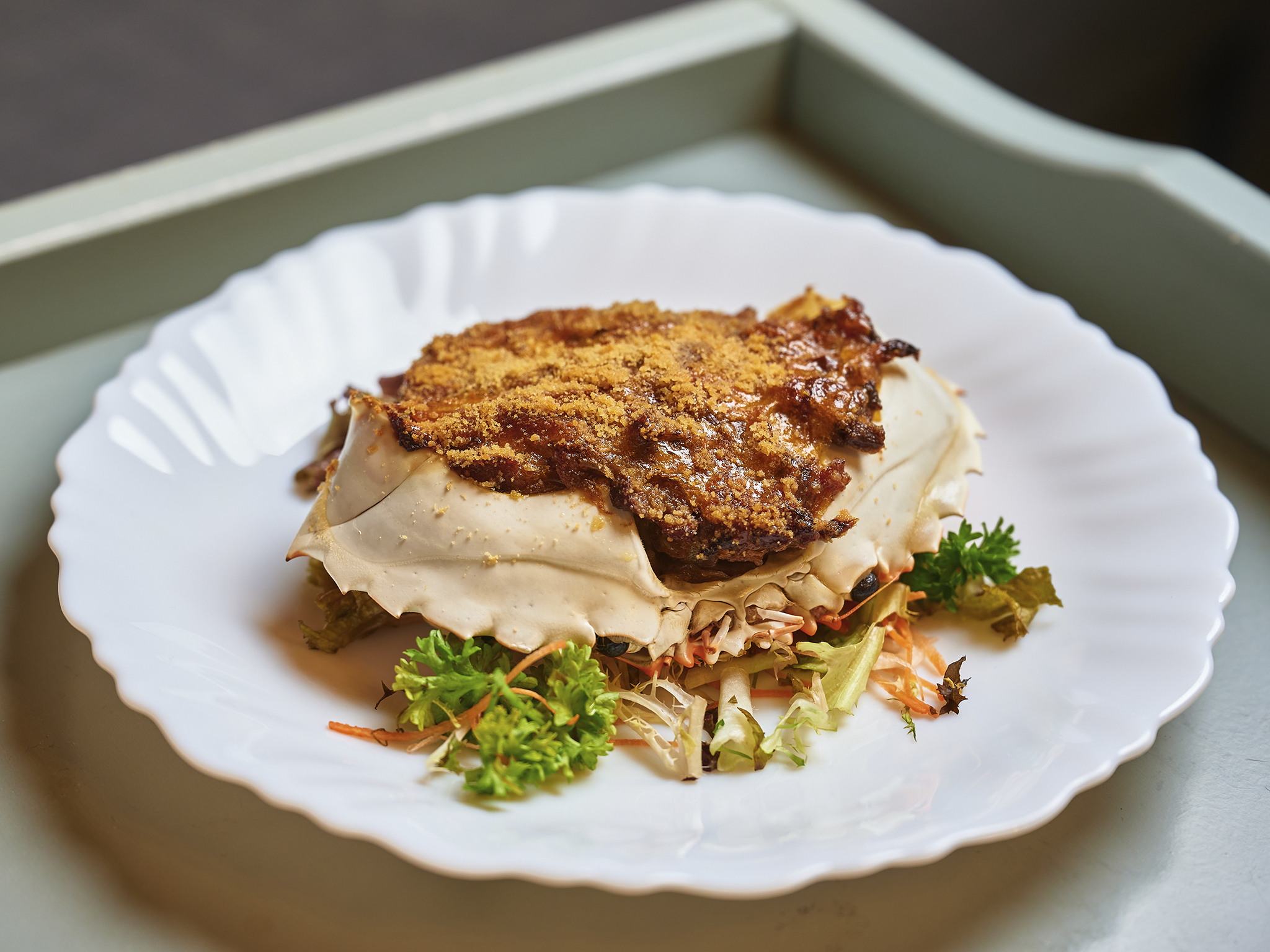 After a positive start, we moved onto the braised beef rib with house gravy ($198 for two pieces), and were immediately catapulted up into the flavoursome echelons of Cantonese cuisine heaven. To say these ribs were delicious is an understatement, with the fall-off-the-bone tenderness of the perfectly braised prime beef complemented by the devilish sweetness of the sauce they were swimming in. A syrupy mixture that belied notes of hoi sin, oyster, and chu hou, this dish was like meaty candy, and 12 pieces, rather than two, would have suited us just fine. Any fears that the lead time between pot and plate would result in meat that was dry or tough were assuaged in fine style, with these some of the finest ribs we’ve eaten, delivered or otherwise.

They say the third time’s a charm, but the third dish was, unfortunately, the least charming of the lot. It came in the way of sauteed prawns with mango sauce and pork ($348), but to our dismay, the prawns were caked in batter that was damp on arrival, and made these supposedly scrumptious bites taste like something akin to a dank mashed potato with mango glaze. Not to worry, the char siu pork could surely salvage this dish. Unfortunately not – the meat was dry and insipid. We can speculate, but we’ll sadly never know exactly what went on inside that plastic box during the course of this transit tragedy. 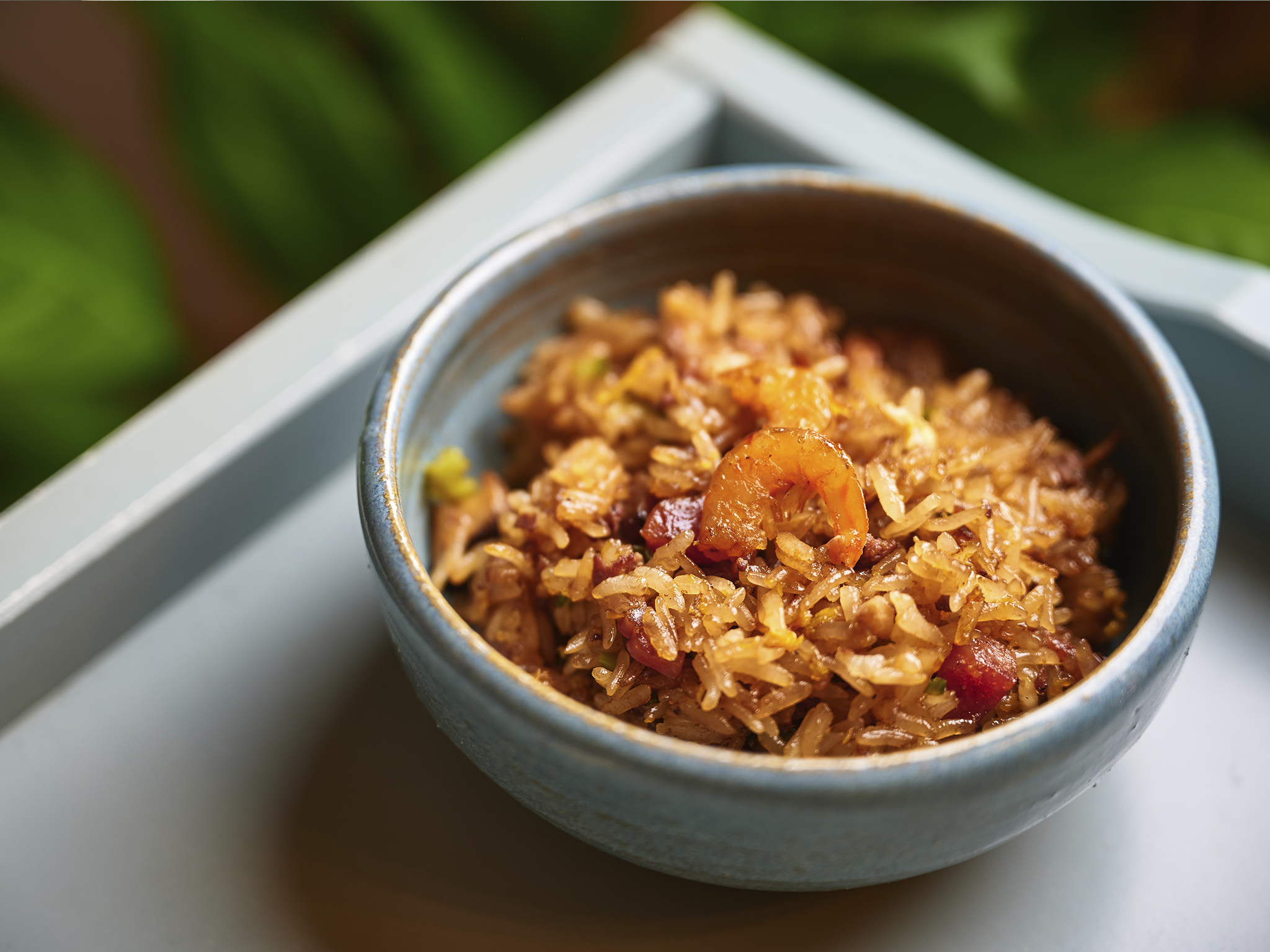 All’s well that ends well, and we concluded with the signature fried glutinous rice ($298). Not the cheapest rice we’ve had, but it travelled excellently and bore the mark of a knowledgeable, skilled kitchen. As well as plentiful chunks of Chinese sausage, the rice was packed with har mai (delicacy Cantonese dried shrimp) and was perfectly oily. All in all, this luxurious take on a Cantonese classic epitomised what the meal was all about. Perhaps not every single dish from Sun Tung Lok will arrive at your door like it would your table, but generally the execution is good, making for a rare culinary experience of eating decadent, Michelin-starred food in the comfort of home.

For delivery, those living in the restaurant’s vicinity can order online, whilst Island dwellers must pick up the phone and place an order of over $1,300 for the privilege.