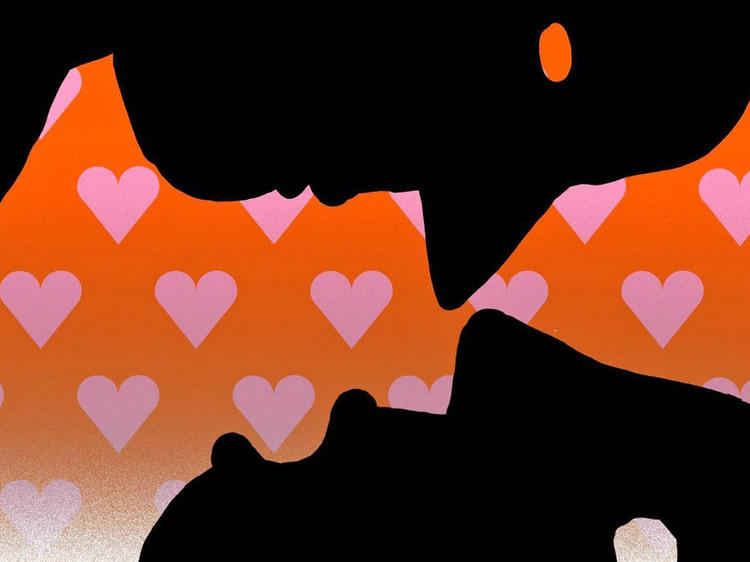 Defining moment: When our hero Mr. Christie accidentally kills God. Well, He was disguised as a spider.

How’s this for a plot synopsis? After being seduced by a studly French sailor, straitlaced upper-middle-class father, husband and unwitting reality-TV star Mr. Christie goes insane and decides to dig a hole to Australia in the garden. Emerging in the Tokyo subway system by mistake, Mr. Christie inadvertently murders God and is exiled to the land of the dead, where he meets Adolf Hitler, Jesus and Dracula. Sadly, just as he’s starting to get a handle on things, the local parish priest decides to rape Mrs. Christie, leading to the destruction of the universe. Part of artist and animator Phil Mulloy’s ongoing Christie series (which has so far consisted of 12 shorts and two features, with another in the pipeline), Goodbye Mr. Christie utilizes ultraminimalist animation, computer-modulated deadpan voices and a dry, mordant wit to create something that is at once enlightening, aggravating, strangely moving and extremely funny.—Tom Huddleston 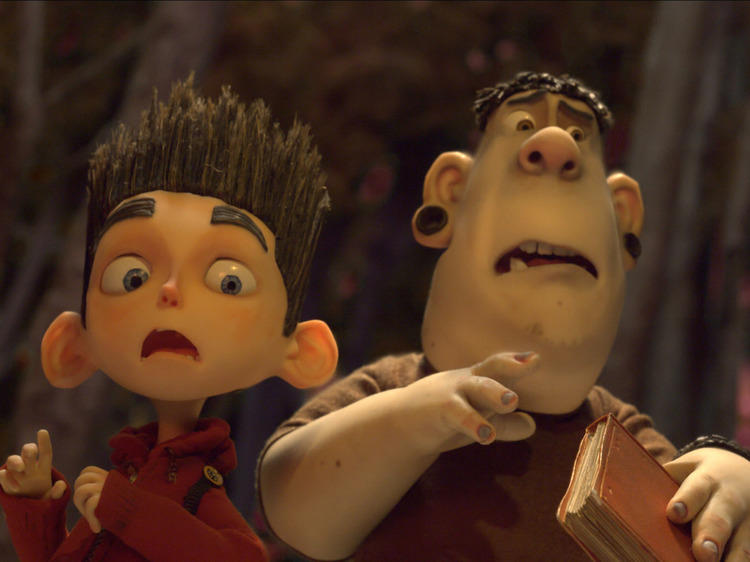 Best quote: “Can’t you be like other kids your age?”

Defining moment: Norman attempts to wrench a book of spells from the rigor-mortis-stiff grasp of a corpse.

If, in a few years’ time, a generation of teenagers develops an unhealthy fixation with wearing black and the undead, point the finger of blame at ParaNorman. Never has a kids’ film been so gloriously ghoulish. Our hero is a horror-film-obsessed 11-year-old called Norman (nicknamed Ab-Norman by the kids at school, who graffiti “freak” on his locker). Norman can see ghosts—which terrifies his meat-and-potatoes dad, who’s worried that his son will grow up into “limp-wristed hippie stuff.” The second stop-motion animation from the studio Laika (after 2009’s Coraline), ParaNorman was brought lovingly to life, with up to 300 people working on it at a time, and 3-D printers to animate characters’ faces. The detail, down to the zombies’ tombstone teeth, is stunning.—Cath Clarke 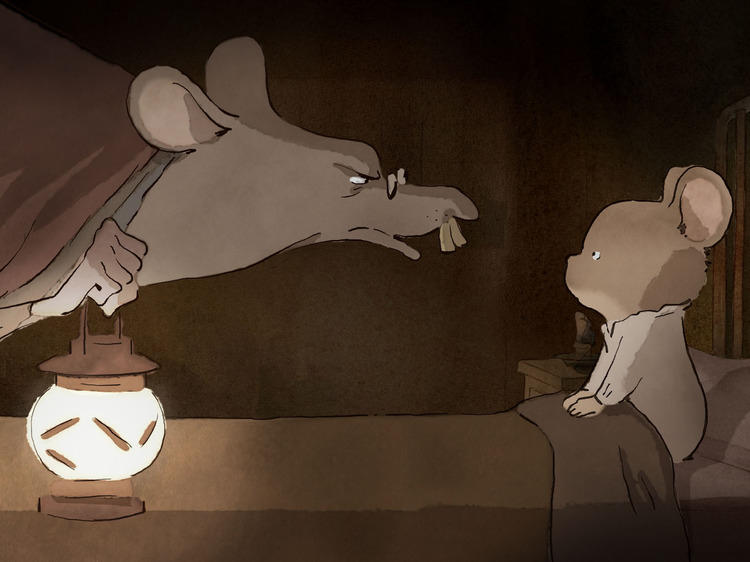 A French children’s publishing phenomenon is brought to handmade life in this story of friendship across species.

Best quote: “If you don’t eat me, I’ll give you whatever you most want in the world.”

Defining moment: Parallel court cases above and below ground, as Ernest and Celestine try their best to end bear-mouse apartheid.

Stéphane Aubier and Vincent Patar came to prominence with the deliciously absurd, aptly titled A Town Called Panic, to which this more conventionally visualized heart-warmer seems positively Disneyesque by comparison—if Disney made off-kilter political allegories involving bohemian bears and tooth-collecting mice on the fringes of society, all rendered in delicate watercolor tones. A dark-horse Oscar nominee in 2014, this adorable oddity was big in France, but has yet to find the English-speaking audience it deserves; perhaps a new Forest Whitaker–featuring dub will make the difference. In its current form, however, it’s as pretty and as quintessentially Gallic as a plate of pastel-colored macarons, though with a sharper bite than you might expect.—Guy Lodge 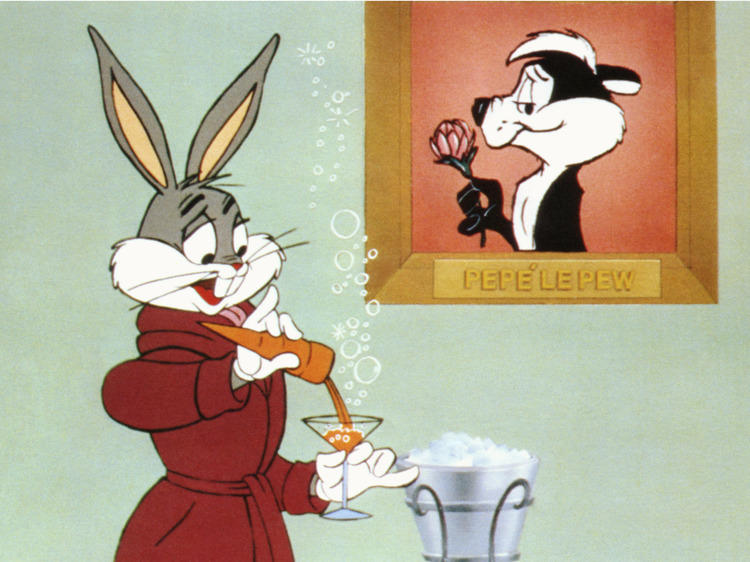 This compilation of classic Looney Tunes cartoons deserves to be far better known.

Defining moment: Too many to choose from, but the Wagner-inspired “What’s Opera, Doc?” will make your jaw drop.

The only conceivable reason why this roundup of the best Warner Bros. shorts isn’t higher on this list is because so few are aware of its existence. Released briefly into theaters in 1979, the film opens with Bugs Bunny in scholarly mode, looking back over the history of the chase movie from the earliest silents to the present day. Cue a cavalcade of some of the most insanely inventive, vigorously intelligent, wildly subversive and mind-bendingly bizarre skits and spoofs ever seen on film. The highlights are now part of our culture: Elmer Fudd going toe-to-toe with Bugs in “Rabbit Fire”; Daffy Duck berating his own animator in the dizzying “Duck Amuck”; the surly appearance of Marvin the Martian in “Duck Dodgers in the 24½th Century.” But where else can you find them all in one place? We don’t use the word genius lightly, but this qualifies.—Tom Huddleston 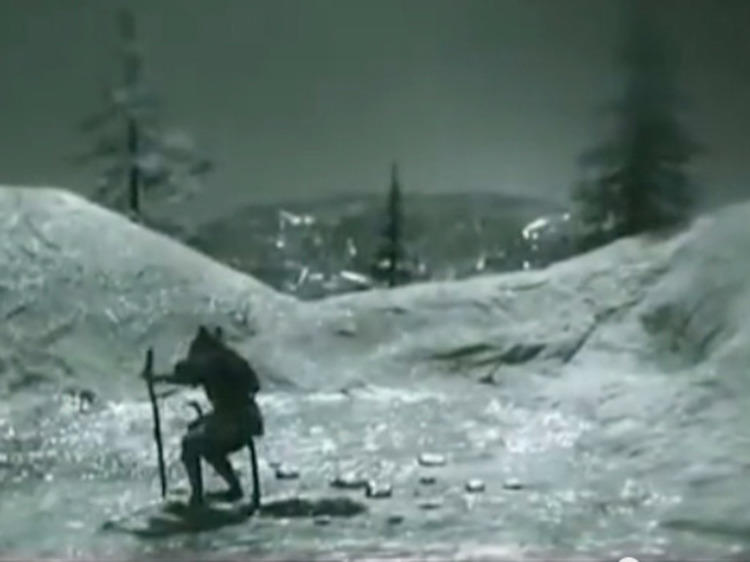 The world’s first feature-length stop-motion animation…and one of the greatest.

Best quote: “Sir, I demand compensation for a cold, a nervous breakdown and some stolen hams.”

Defining moment: The silver-tongued, rascally fox talks his way out of the hangman’s noose.

Wes Anderson acknowledged The Tale of the Fox as the biggest single influence on the look of Fantastic Mr. Fox. Watching the 1930 French film today (you can see it in full on YouTube [link to www.youtube.com/watch?v=rz0wAD1o0gs]), it’s astonishing how fresh and modern it is. Codirector Wladyslaw Starewicz pioneered stop-motion animation, creating the elegant world of The Tale of Fox with his daughter Irene. Fast, funny and anarchic, The Tale of the Fox is as giddily inventive as Pixar, and as charming as Wallace and Gromit. But no film today could get away with being this deliciously and subversively cynical. In another kids’ film, the crafty, cunning fox would get his comeuppance. Not here. After a string of dastardly crimes, Monsieur Fox is hauled in front of the king of beasts, a chin-stroking lion, only to cheat his way to freedom. Bravo.—Cath Clarke 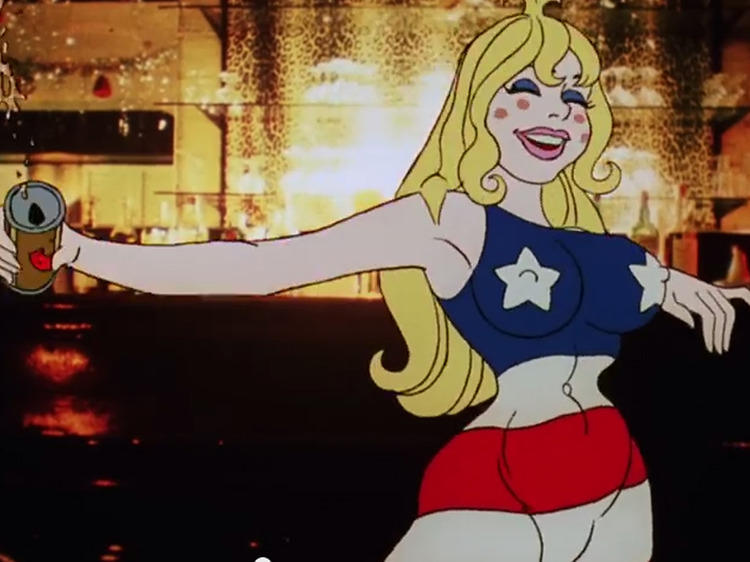 Best quote: “Harlem. Yeah! The pot of smack at the end of the rainbow. No more happy-actin’, back-bustin’. Harlem!”

After introducing drug use, salty street talk and working genitalia into his scandalous first feature, Fritz the Cat, Ralph Bakshi really caused a stir with this caustic look at race relations, featuring three animated brothers in conflict with both phony revolutionaries and the New York Mafia. Notwithstanding the white and gay characters (just as caricatured as the black ones), racial-equality groups were appalled and the film was barely released, later emerging on DVD under the more benign title Street Fight. Viewed in retrospect—and putting aside the Tarantino argument of whether a white writer-director has the right to use the n-word so liberally—it’s possible to see Bakshi attempting a strong statement about the subjugation of African-Americans, but undermining himself by using the worst stereotypes of preachers, pimps and whores to make his point.—Trevor Johnston 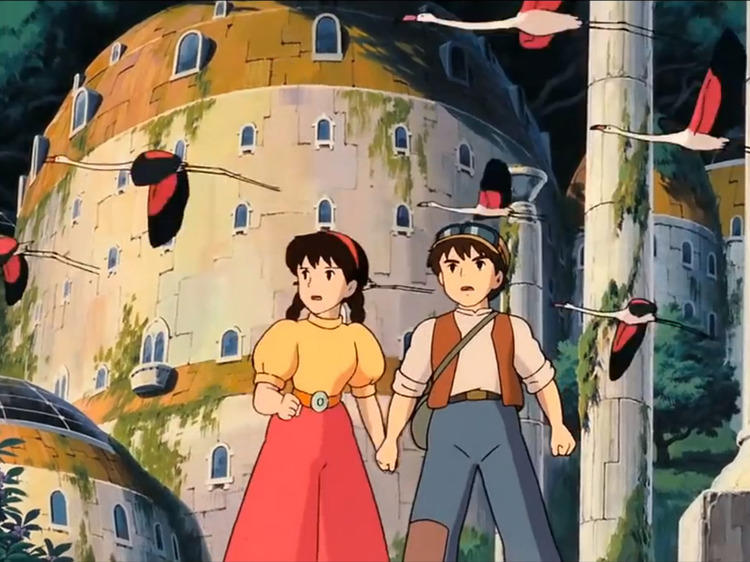 Thrilling adventure, as an archetypal Miyazaki heroine seeks a mythic lost city somewhere above the clouds.

Best quote: “The crystal should remind us that we come from the earth and to the earth we must return.”

Defining moment: The destructive power of a giant robot signals the ominous threat of Laputan technology.

For the very first Studio Ghibli production, writer-director Miyazaki stepped forward boldly with fleets of lovingly realized vintage flying machines. The film traces the story of a young girl wondering whether the glowing crystal passed to her as a family heirloom will lead her to the legendary flying city of Laputa. If the tale then proceeds along expected lines, the exhilaration of the myriad chase sequences and aerial dogfights remains a marvel (not least given the rudimentary technology available to the Ghibli animators at the time). Also, a strong, ecologically aware undertow adds ballast to otherwise slightly two-dimensional villains. As such, it’s not as thematically rich as Miyazaki’s best (those titles are coming up), but the sheer imagination on view as the camera navigates the richly thought-out Laputa cityscape is obviously the product of a true visionary.—Trevor Johnston 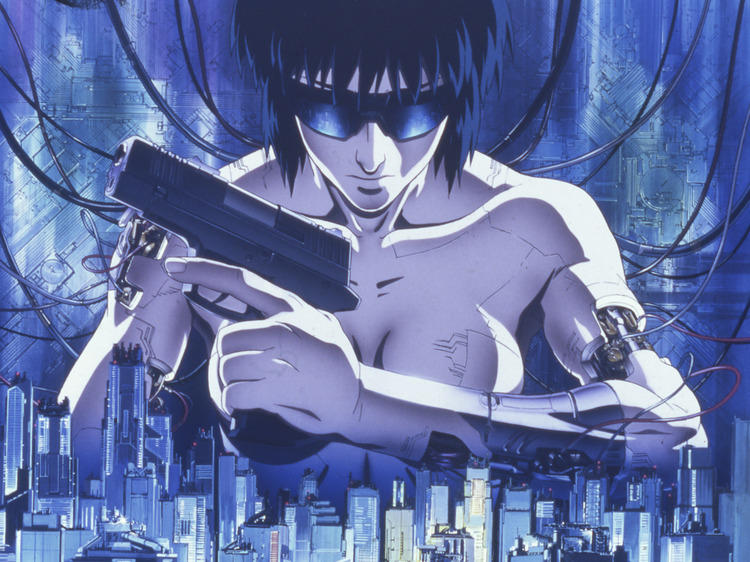 Anime’s international breakthrough, probing the dystopia of an all-engulfing network.

Best quote: “I am a living, thinking entity who was created in the sea of information.”

Defining moment: Our security-agent heroine pulls the connectors from her neck and we realize she’s a cyborg.

Among the first Japanese anime features to be released theatrically in the West, this remarkable vision of the networked future arrived when most of us were barely aware of the Internet. As an elite cybercrime squad hunts down a dangerous hacker known as the Puppetmaster (who’s active online yet elusive in the real world), the story is also an opportunity to wonder if a character is still human when its body is a patchwork of cyborg limbs, and its memories a catalog of information open to manipulation. It’s more a think piece than a thriller, and you can certainly see the roots of the Matrix trilogy here. A Blade Runner–like noir atmosphere still compels, meshing beautifully with Kenji Kawai’s electro-organic score to convey the aching melancholy of being connected to everything, yet remaining utterly alone.—Trevor Johnston 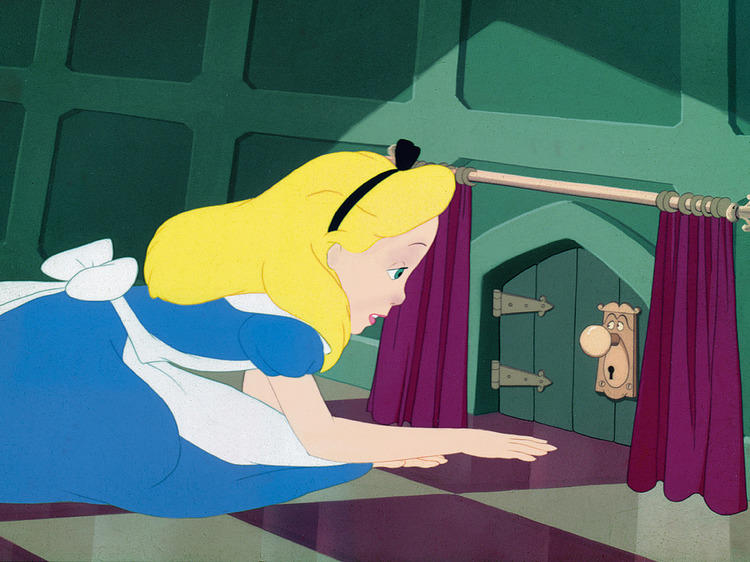 Walt Disney had long had his eyes on adapting Lewis Carroll, and when he did so, the results were faithful enough to qualify as one of the studio’s strangest offerings. Evoking the books’ original John Tenniel illustrations but with more than a touch of Disney cuteness, the film as a whole is in thrall to Carroll’s singular visual imagination and his play with language. But it doesn’t quite know how to turn dotty schoolgirl Alice’s episodic odyssey following the white rabbit into anything resembling a satisfying story. One can only imagine what apple-pie audiences thought of it at the time, besieged by hookah-puffing caterpillars, hallucinogenic mushrooms, the Mad Hatter’s tea party and an evidently psychotic Queen of Hearts. It was subsequently a late-night favorite among the herbally assisted.—Trevor Johnston 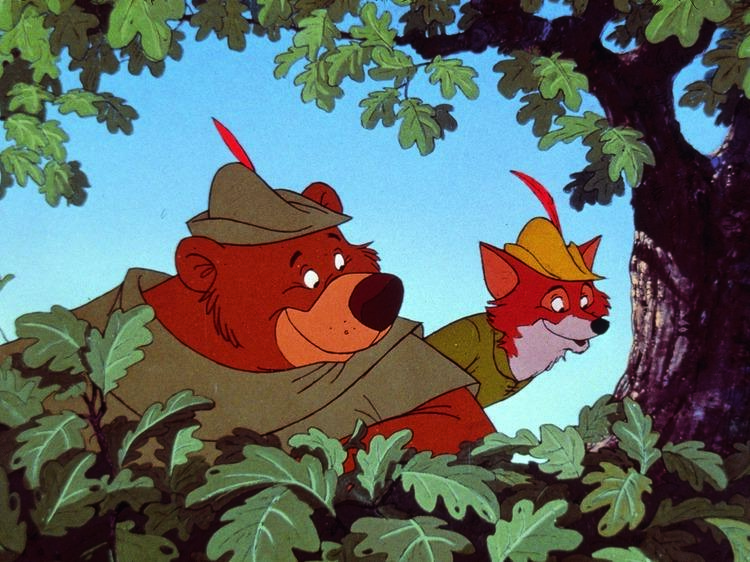 Best quote: “Oh, he’s so handsome…just like his reward posters.”

Disney may be infamous for manhandling the world’s finest folktales into moralistic all-American parables (see also The Sword in the Stone, Aladdin, Mulan, etc.), but there are times when it really works. Robin Hood is a fine example: The Jungle Book director Wolfgang Reitherman’s decision to transplant hokey, cowpokey Western movie tropes to Ye Olde England should have led to disaster, but the resulting film is so sweet-natured, so casual, so doggone friendly that it becomes impossible to resist. The minuscule budget meant that entire sequences and characters were lifted wholesale from earlier Disney hits (just think of Little John as a brown Baloo), but somehow this only adds to the film’s unpretentious, shaggy-dog charm.—Tom Huddleston