While some associate Malibu with mansions perching on the cliffs and surfers bobbing on the breaks, we tie the city to L.A.’s most stunning natural wonders. Forget the tarnished glitz of Hollywood and the posh landmarks of Beverly Hills; these things to do in Malibu make us question why we don’t spend every single weekend in the waterfront city. From some of the best beaches around to hiking trails with waterfalls—and a little bit of wine tasting to wind down—we’ve rounded up our favorite things to do in Malibu.

Just a heads up that you’re probably going to need a car to visit most of these spots. Malibu’s scenic landmarks largely hug the Pacific Coast Highway and the beachfront, which runs from west of Pacific Palisades to the Ventura County border. While Metro’s 534 bus will take you about as far west as Zuma Beach, you’ll need your own wheels (or a rideshare—cell reception willing) to venture into the more remote coastline to the west, as well as the canyon communities and hiking trails to the north in the Santa Monica Mountains.

RECOMMENDED: See more of the best of Malibu

Best things to do in Malibu 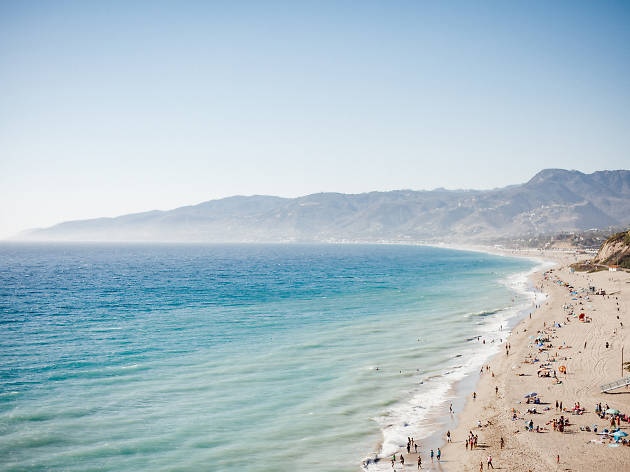 Make the drive past Will Rogers and Surfrider beaches and you’ll be rewarded with a clean, wide patch of sand and surf at Zuma. This Malibu beach accommodates crowds with plenty of on-site parking (pay at the lot or park for free along PCH) and lifeguards on duty. Directly to the south, you’ll find Point Dume State Beach, with both hikers and climbers scaling its iconic namesake rock face and strolling through seasonal wildflower fields atop its crown. 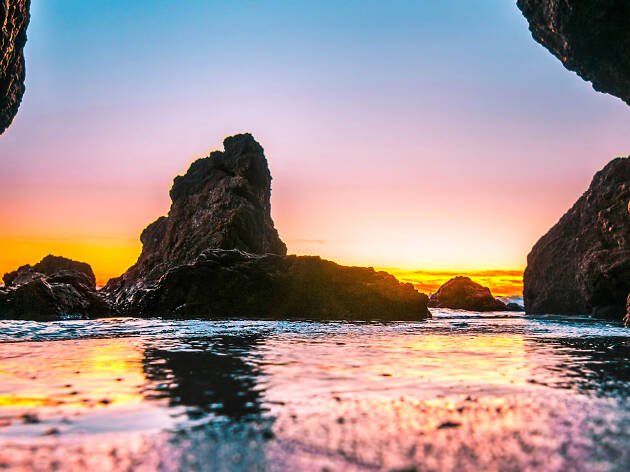 Small, beautiful and dominated by rocky outcrops, El Matador is easily the most picturesque piece of coastline in the county. Wear shoes and don’t bring too much gear; the western Malibu beach is only accessible via a steep gravelly path from a paid parking lot. There are no lifeguards or other facilities, but it’s the perfect spot to spread your towel in the cupped hands of the rocks—just watch out for high tide when sand comes at a premium. Arriving early or staying late should reward you with a memorable dawn or sunset. 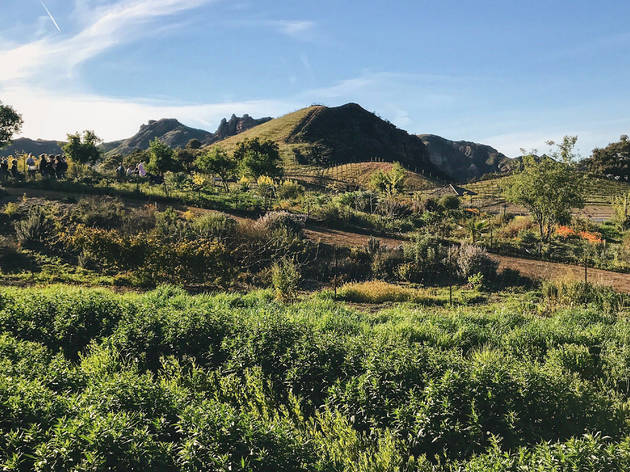 Hike a two-mile loop across the varied terrain of Saddlerock Ranch, with stellar views of the scenic Malibu surroundings along the way, and reward yourself with some wine to-go at the end. The tasting room at Malibu Wines never reopened following the Woolsey Fire—the vineyard instead shifted its attention to a wine and beer garden in the Valley—so this two-hour, 21-plus hike is pretty much your only option to trek through the area. 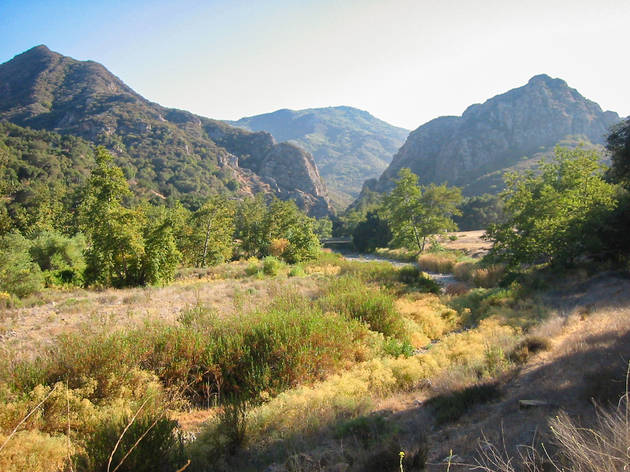 With dramatic gorges, open pastures hidden pools and jagged peaks, Malibu Creek is simply one of the most stunning spots in Southern California. The Santa Monica Mountains space is filled with scenic trails and, since this is still L.A., a bit of silver screen history: you can spot singed remnants of the M*A*S*H set and splash in the rock pool that was featured in Planet of the Apes. 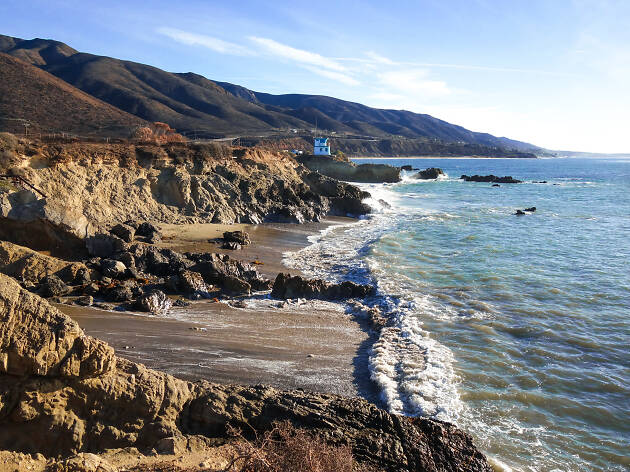 Leo Carillo has the best of both worlds—a well-equipped stretch of sand with seclusion and scenic beauty. Stretching one and a half miles across the north tip of Malibu, you’ll find enough quite from the rift raft of Santa Monica beach warriors and crowds of Surfrider. Long boarders can paddle out for mellow waves—it gets no more than chest-high at this point break—while nature lovers can explore tide pools on the rock-dotted coastline and a nearby trail. And don’t forget Fido: The northern portion is one of the rare beaches where dogs (leashed) are allowed to roam. 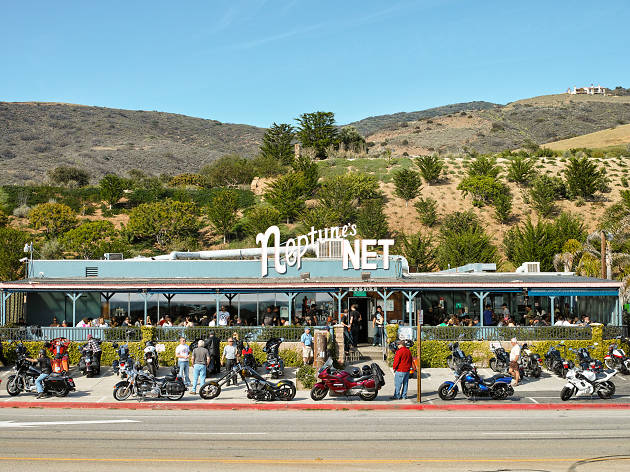 While the deep-fried seafood here is tasty enough, Neptune’s Net is worth a visit for its postcard-perfect location. With a colorful front porch that dates back to the ’50s and a ceaseless stream of bikers, the water-adjacent spot beckons motorists making their way along PCH. Take your bites across the street and watch the kite surfers at County Line Beach sail by. (If you want superior seafood but a slightly less serene location, try the deservedly-popular Malibu Seafood.) 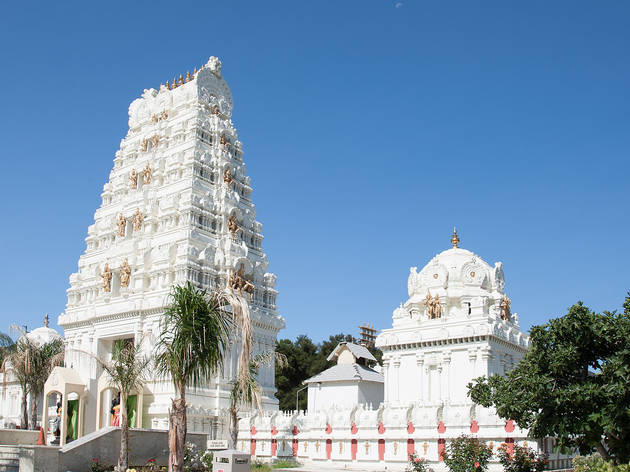 Open to the public on weekends only.

Though Malibu in name only, this Hindu temple is technically in Calabasas, tucked away in the Santa Monica Mountains. Dedicated to god Venkateswara, the temple holds regular services and special events year-round. Hungy? The kitchen serves tasty vegetarian eats on weekends. The breathtaking space is also available for hire. 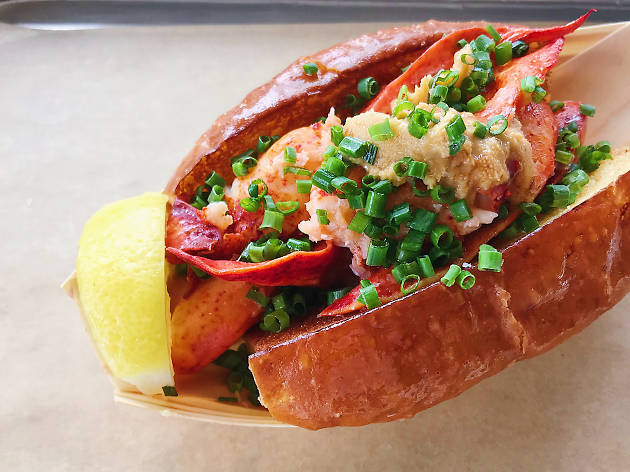 This casual outdoor shopping and dining center attracts a mix of both locals grabbing lunch in wetsuits, celebrities pretending they don’t want to be seen and tourists strolling through after a day at the beach. Restaurants range from take-away sandwich shops to upscale eateries, while the retailers mostly sell L.A. quintessentials: designer jeans and $100 T-shirts. Make sure to also check out the adjacent Malibu Lumber Yard, a virtual extension of the Country Mart, as well as Malibu Village across the street—home to easily the area’s best lobster roll at Broad Street Oyster Co. 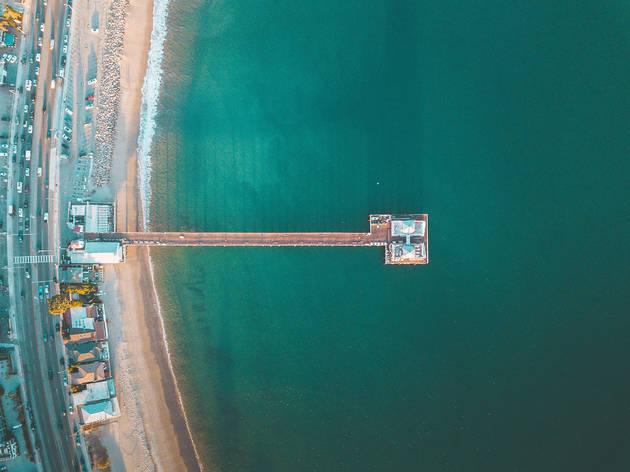 Those seeking escapism and romance may want to seek out another beach, but the payoff for fighting the crowds here is enjoying a stretch of sand deemed a World Surfing Reserve made famous by Gidget and other surf legends. The quintessential Malibu beach, the prime location makes for great people-watching and three point breaks make this a perennial hot spot for both long boarders and short boarders. 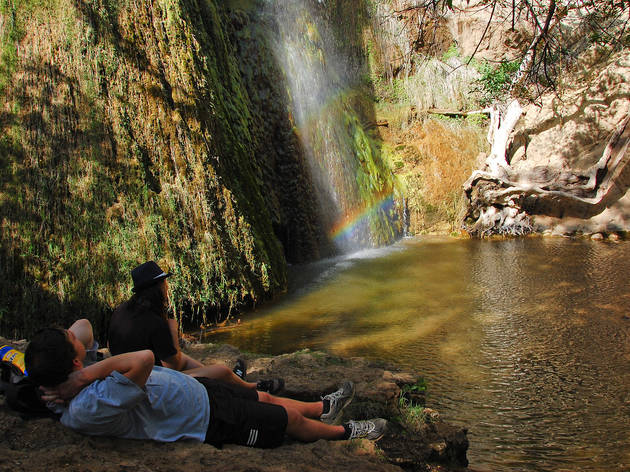 This is one of the biggest waterfalls in Southern California: a two-tiered, 150-foot cascade that pours down a series of limestone rocks covered in bright-green moss. You’ll start on the approximately 3.8-mile journey from Winding Way East, a private road in the Malibu hills that takes you uphill past ocean-view estates. Be prepared to crisscross streams and for some serious rock-hopping. 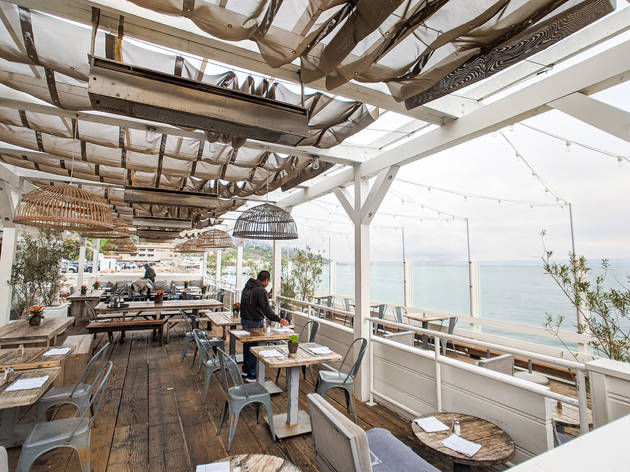 This charming Malibu pier welcomes both local residents and tourists for breathtaking views of the coast, boutique shops and eateries. Unlike the crowded Santa Monica Pier, Malibu’s is a quiet, tranquil spot for a sunset stroll or beachside bite from Malibu Farm, either the casual cafe at the end of the pier or the sit-down patio restaurant near the entrance. 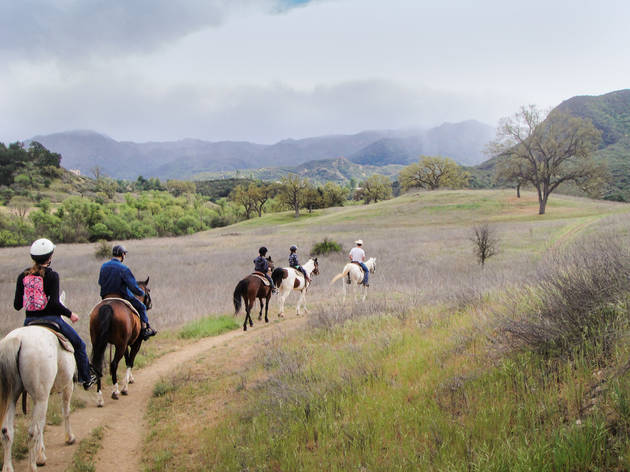 Why tackle Malibu’s rolling interior on two legs when you could do it on four? Malibu Riders operates guided horseback rides across Malibu and Agoura Hills, as brief as a 45-minute ride through Zuma Canyon to a two-hour route around Malibu Creek State Park. Our preference? The hour-long option that starts by Paramount Ranch, which charts a course through wooded areas and open fields with a mountainous backdrop. 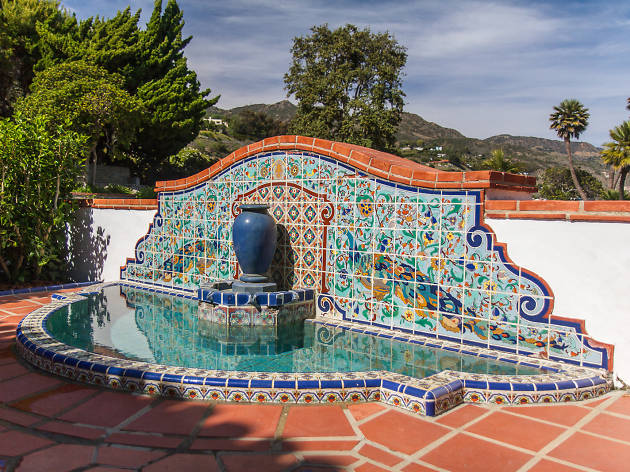 This striking 1929 Spanish-style building sits, along with the Malibu Lagoon Museum, inside the confines of Malibu Lagoon State Park. The major attraction at Adamson House is the array of decorative tiles manufactured at the once-celebrated but now-closed Malibu Tile Works. The guided tours allow visitors access to much of the property. 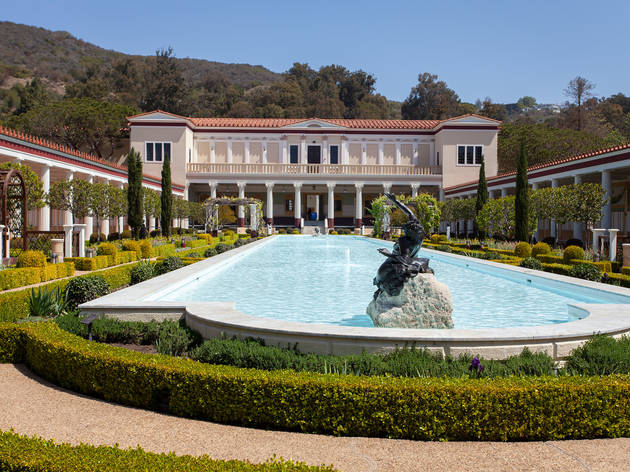 This one’s technically just outside of Malibu, in a Pacific Palisades villa that dates back to 1974, when oil magnate J. Paul Getty opened a museum of his holdings. Eventually the decorative arts and paintings were moved to the Getty Center, and the villa was closed for conversion into a museum for Getty’s collection of Mediterranean antiquities. Today, there are roughly 1,200 artifacts on display at any one time, dated between 6,500 BC and 500 AD, and organized under such themes as “gods and goddesses” and “stories of the Trojan War.” Even if you’re not interested in the art, the palatial courtyards and manicured gardens are worth the visit alone.

Can’t tear yourself away from the beach? 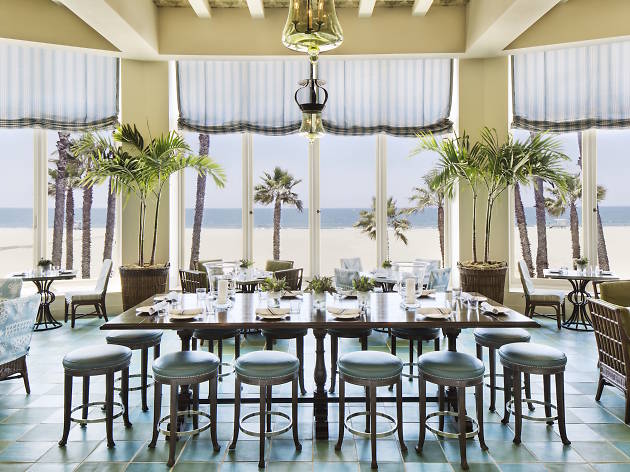