The 8 best things we saw at the Melbourne Festival

We lost ourselves in labyrinths, sung along with the MSO and shared biscuits with fellow audience members to bring you our highlights of Melbourne’s largest arts festival

For 18 days in October, hundreds of artists from Australia and many other nations converged on the city. They brought theatre, dance, music, visual art and live art to Melbourne’s performance spaces, streets, laneways and even hair salons. They surprised, delighted and challenged audiences. And now, as quickly as they appeared, they are gone.

In his Melbourne Festival debut, artistic director Jonathan Holloway (formerly the artistic director of the Perth International Arts Festival) took a number of risks. While he kept some important festival traditions (Ilbijerri Theatre Company’s Welcome to Country ceremony Tanderrum, most importantly), he decided to scrap the riverside festival hum. He programmed a number of pieces that were highly participatory, including the live-art-meets-game-show The Money and Haircuts by Children (exactly what you think it is). Hugely successful shows from overseas (Robert Lepage’s 887) shared space on the program with new commissions from local companies (Back to Back’s Lady Eats Apple), and the grand (David Bowie: Nothing Has Changed) was counterbalanced with the intimate (Collisions). Numbers-wise, Holloway’s risks paid off: tickets became very scarce towards the end of the festival, and takings are reported at $2.9 million (higher than the target organisers set themselves).

But which were the shows that got our critics’ hearts pumping? Here, we present our eight most memorable Melbourne Festival moments.

Having festival withdrawals? Check out the best of the Sydney Festival, taking place in January, or have a look at the best upcoming theatre, dance, art and music in Melbourne. 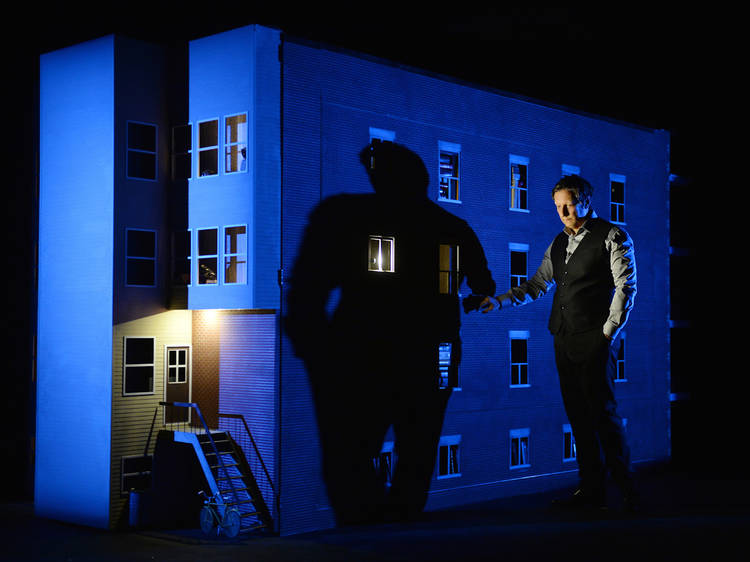 An unforgettable window into the seminal moments of a nation by one of theatre's living legends.

Excerpt from review by Tim Byrne:
Of all the art forms, theatre is the most ephemeral; once that curtain comes down, the only place a production exists is in the audience’s memory. French Canadian theatre maker Robert Lepage and his company Ex Machina return to Melbourne with a project dedicated to memory, both personal and collective.

887 is an autobiographical one-man show – the title is the address of Lepage’s childhood home – but it is also a beautifully considered evocation of a seminal moment in the history of Québec: the October Crisis of 1970, when the Liberation Front of Québec kidnapped and murdered cabinet minister Pierre Laporte in a bid for French Canadian sovereignty. Lepage was 12 at the time, but some memories are hard to shake. 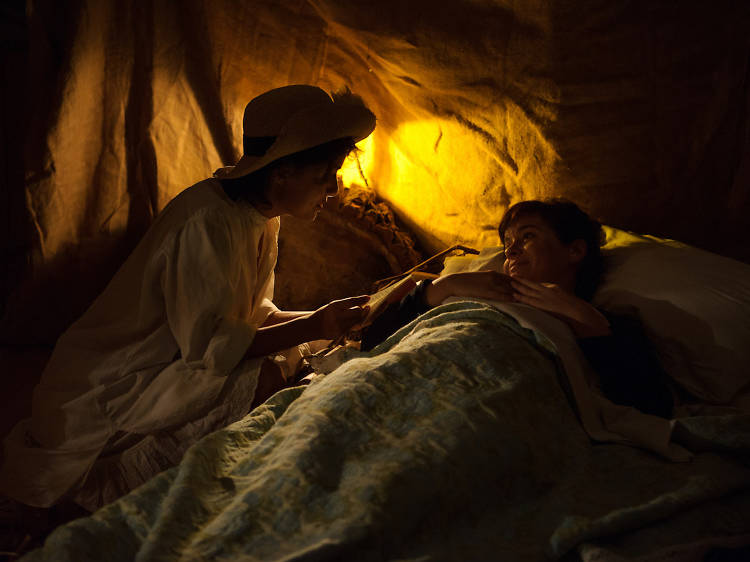 Photograph: The Echo of the Shadow

2. The Echo of the Shadow

For the majority of the population who can see and hear, it’s easy to forget how much we rely on those two senses in nearly every aspect of our lives. That is, until you’re standing in a completely dark and silent corridor. An invisible path stretches out front. You put your hand out to one side, then jump slightly when you feel the softness of a velvet curtain. As if by instinct, you raise your other arm, find a curtain on the other side of your body and begin to walk, guided only by touch. This is the world created by Barcelona theatre company Teatro de los Sentidos (Theatre of the Senses) – a collective of artists interested in creating immersive live art pieces where touch, taste and smell are the primary modes of experience.

Taking Hans Christian Andersen’s story of a lost shadow as loose inspiration, The Echo of the Shadow sees individuals roaming through a dimly lit labyrinth, encountering miniature worlds that charm, mislead and (for a brief moment) frighten. The result is dreamlike; as we sleep, we do not experience fully formed narrative sequences, and when we wake, we recall snatches of moments; a sound, a smile, the touch of a hand. Rose Johnstone
Read more
Advertising 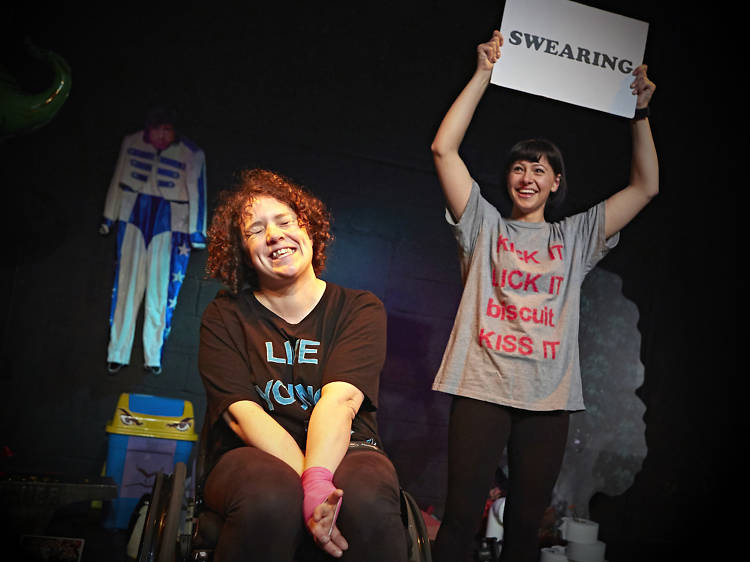 British theatre maker and author Jess Thom lives with Tourette’s. She also creates, writes, teaches and entertains using Tourette’s as the impetus and the inspiration for her work; the latest being her stand-up/theatre hybrid piece Backstage in Biscuit Land. Thom sees her verbal tics – the most common being the word ‘biscuit’, which she says up to 16,000 times a day – as “crazy language generators”. And as our tour guide through Biscuit Land – a world formed from Thom’s lived experiences, non-sequitur language tics and poignant storytelling – she proves a charming, utterly hilarious and whip-smart host.

In a series of vignettes which concentrate on the realities (and absurdities) of her daily life, Thom deftly toes the line between being hilarious while not shying away from the difficulties of living in a world where she is differently abled and misunderstood. She makes a compelling case for the need for ‘relaxed performances’, an increasing movement in theatre where audience members who can’t abide by the ‘rules’ – silence and very little movement in the seat being the primary two – are completely welcome. More broadly, she reminds us of the need for, and all the as yet untapped benefits of, a world that celebrates greater diversity. Rose Johnstone
Read more 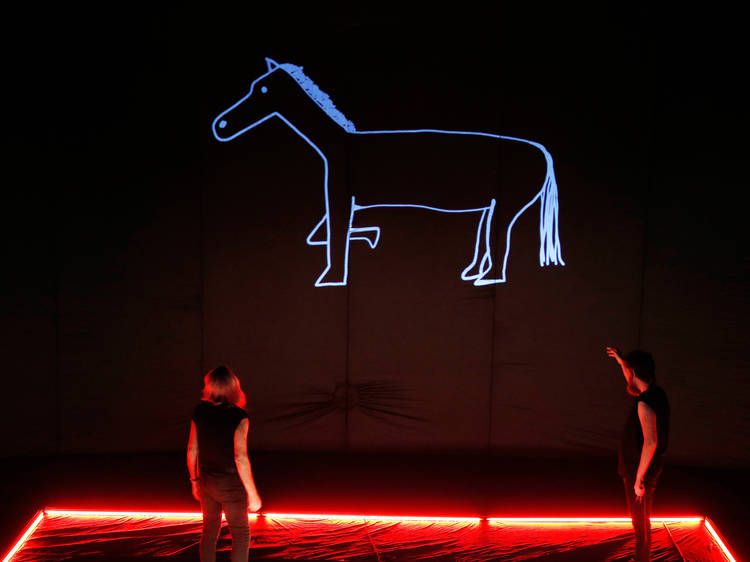 Back to Back Theatre's latest show spans from the beginning of the world to the limits of humanity – and everything in between.

Excerpt from review by Tim Byrne:
Back to Back Theatre are (to quote the title of their book) “people who do shows”. And while this statement seems self-evident, it also masks a deeper truth about this ensemble: that their no-nonsense approach to theatre often finds them touching up against the limits of experience.

One of the ways they achieve this is by embracing and undercutting the most sophisticated theatrical wizardry available. Any special effects they employ are subtly mocked by the matter-of-fact playing style of the actors. The audience reach the playing space through what is basically a large white inflatable vulva. Inside is the world’s womb, black and featureless. Scott Price and Brian Lipson open the show by holding up chalk boards cautioning us to prepare for violence and death, but this seems more a general warning than an indication of what’s to come; any violence is purely existential and death is ultimately withheld. 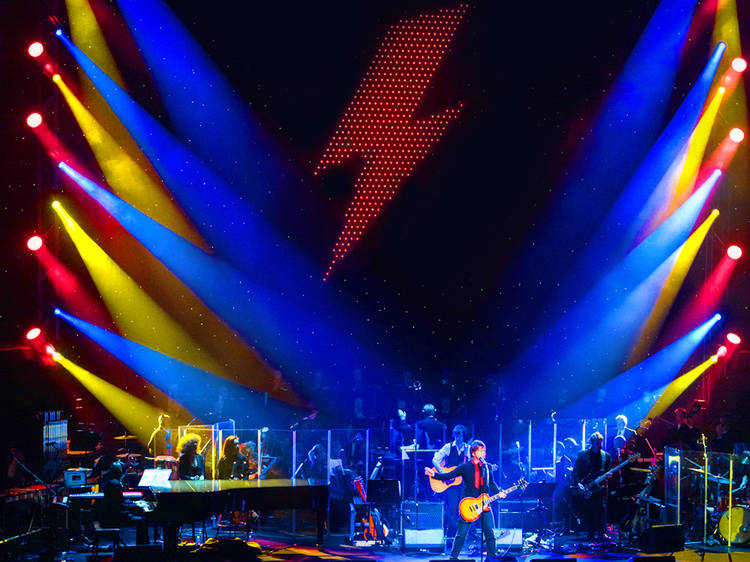 5. David Bowie: Nothing Has Changed

In January this year, the world lost one of its great creators: the man born as David Jones. It was an astute piece of programming by Jonathan Holloway to commission Nothing Has Changed, a collaboration between the Melbourne Symphony Orchestra and five incredibly talented (and incredibly different) Australian performers.

The famously chameleonic artist could never have been captured by just one performer. Each of the five performers brought a different energy to the stage; Rogers brought his swagger to ‘Young Americans’, Deborah Conway ripped through ‘Ziggy Stardust’ with a smile on her face and Steve Kilbey tackled a darker post-Ziggy Bowie in ‘Diamond Dogs’. Almost unexpectedly, the slightly lesser-known iOTA – the only performer paying homage to Bowie’s androgynous, highly stylised side in makeup and the Pierrot suit – was the fan favourite of the night. The emotional intensity in his voice when he reached the soaring high notes of ‘Life on Mars’ was only matched by Rogers’ knees-on-the-floor, head-in-hands rendition of ‘Lazarus’; Bowie’s final gift to the world from his posthumously released album, Blackstar. Rose Johnstone 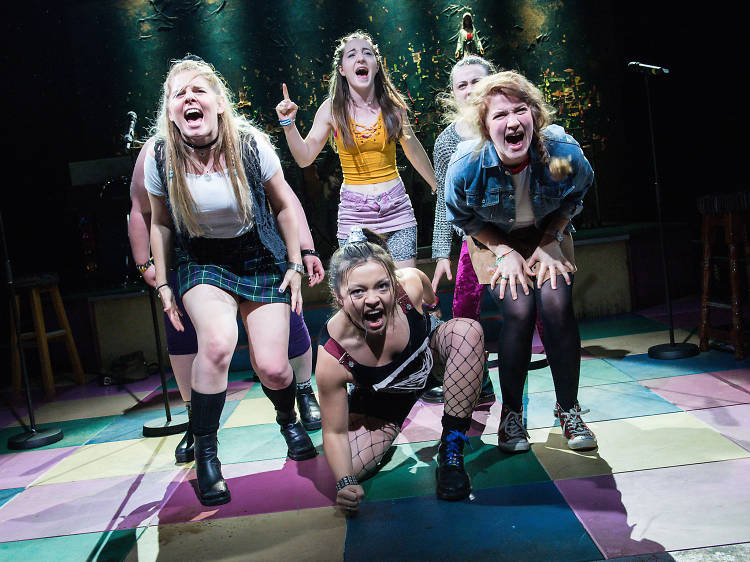 6. Our Ladies of Perpetual Succour

The National Theatre of Scotland's raucous tribute to teenage hedonism and self-discovery is a highlight of the Melbourne Festival.

The girls finish their song, breathe a sigh of relief and light up their ciggies. It’s not long now before they’ll be leaving their small seaside town for Edinburgh, where they’ll compete in a national choir competition. They’re falling over themselves with excitement; visiting the capital means they’ll get a taste of freedom, and hopefully, more than just a taste of sex, booze and Sambuca. What they don’t expect is a night that will change them all irrevocably. 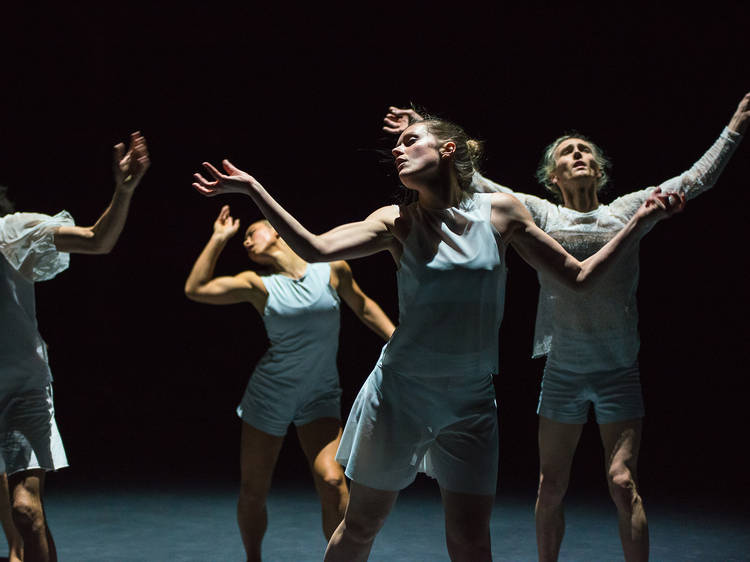 Excerpt from review by Luke Forbes:
The performance commences unannounced, as a mob of ominous cloaked figures enter in darkness then wander on the periphery of a well-lit circle at the centre of the performance space. As the ‘dark chorus’ of extras endlessly shuffles along its circular path, five featured performers – dancers Benjamin Hancock, Stephanie Lake, Jessie Oshodi, Tyrone Robinson and Lilian Steiner – emerge from the pack in flashes of movement and speech, gesturing abstractly and reciting a hushed text in unison. The atmosphere is arresting, compounded by Robin Fox’s droning score; it’s as if we’re privy to some kind of cult ritual.

The choreography, in its most conventional sense, begins when two dancers strip down to pressed white dance costumes and take position centre stage, facing the audience. Here they perform a series of gestures and continue to experiment with these introductory movements. They’re joined by two more dancers and the scene evolves into a jerky quartet, all four absently rehearsing the steps of what appears to be a virtuosic, early 20th-century expressionist dance. 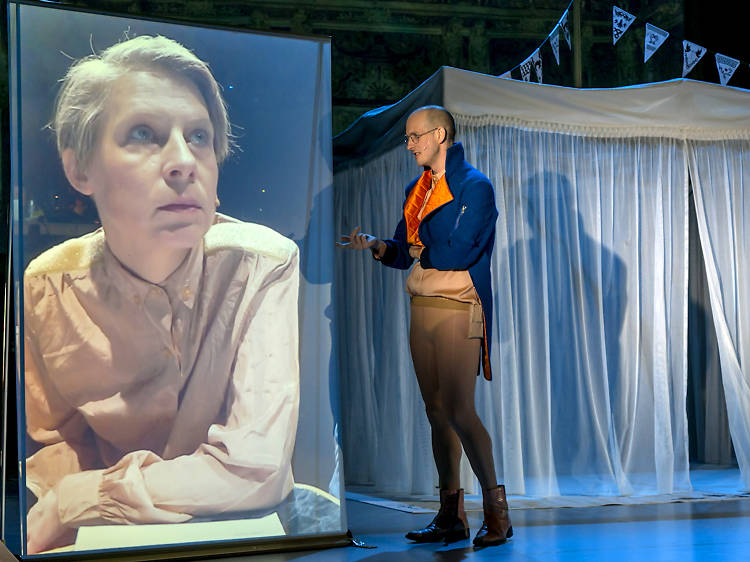 A battle with such a seminal work of literature should leave a little more blood on the stage.

Excerpt from review by Tim Byrne:
English/German theatre company Gob Squad are renowned for their improv-heavy agitprop theatre; unpredictable, even dangerous, they speak directly to our most pressing contemporary concerns. It is so out of character for them to adapt a novel for the stage – not to mention Tolstoy’s infamously epic Russian masterpiece of the Napoleonic wars, War and Peace – that it feels like something of a joke.

It isn’t a joke, exactly, but then it isn’t an adaptation either. Tolstoy is merely a springboard for a wider discussion about our capacity – our tendency – to tolerate violence in an otherwise civilised society. Gob Squad take a minor detail from the novel and fashion it into a major motif: the concept of the Russian salon, that ironically French invention whereby ‘society women’ invited artists, philosophers and other influential people to their houses to discuss the state of things. There’s a comparison to be made between the ‘salon culture’ in War and Peace and our contemporary way of engaging with and understanding international events; both are democratic, highly opinionated – but largely coddled and remote. It’s an uncomfortably apt metaphor.

The best shows to see this month 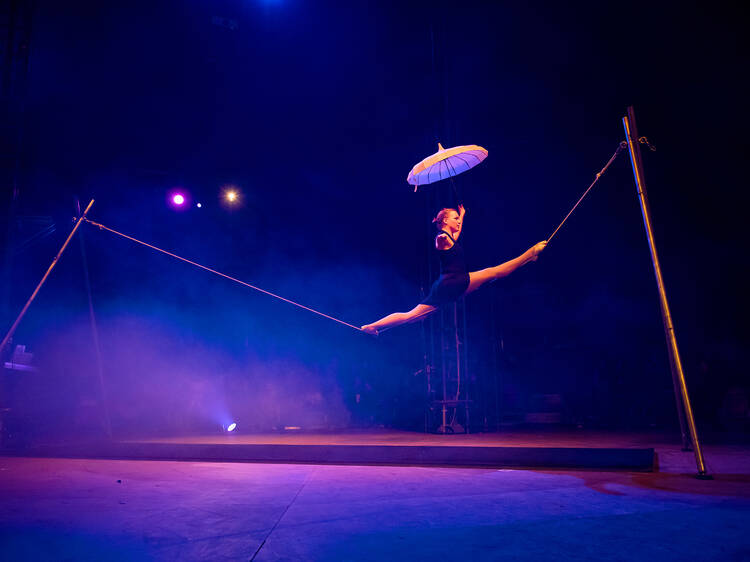 Wondering which Melbourne shows to see? Check out the latest theatre, musical, dance and opera reviews from our critics.