Whether you're after outdoor art or something in the gallery – here's what art exhibitions and events are happening in Melbourne over the next seven days. 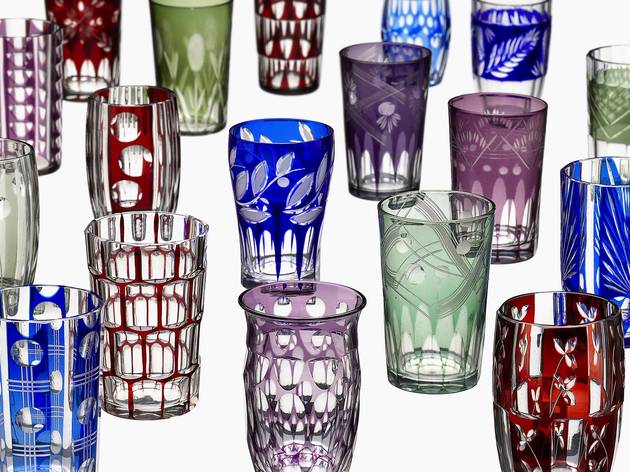 The early 20th century was a time of great cultural and social prosperity for Japan. Between the 1923 Kanto earthquake and the outbreak of World War II, emerging movements from Europe began to influence the island nation’s artists, resulting in the creation of Japanese Modernism. The NGV has brought more than 190 of these works to Melbourne for Japanese Modernism, a multidisciplinary exhibition spanning printmaking to fashion. The NGV has spent the last five years collecting works for Japanese Modernism, with all works featured being exhibited for the first time in Australia. Japanese Modernism showcases rare paintings and woodblock prints as well as magazine covers, street posters, kimonos and accessories in Art Deco and Art Nouveau designs. Bronzeware, lacquerware and glassware are also featured and highlights how these contemporary art movements worked with centuries-old Japanese designs. Women in early 20th century Japan began to experience new freedoms, with many moving to metropolitan centres, finding work and gaining the opportunity for financial independence. In that light, the NGV has acquired works that celebrate the art of Japanese women artists.  One of the most promising women artists of the period was Taniguchi Fumie, whose large-scale, six-fold screen work ‘Yosoou Hitobito’ (‘Women Preparing for a Party’) will be featured in the exhibition. The work takes inspiration from 17th century Matsuura screens and depicts the changing attitudes towards women and fashion 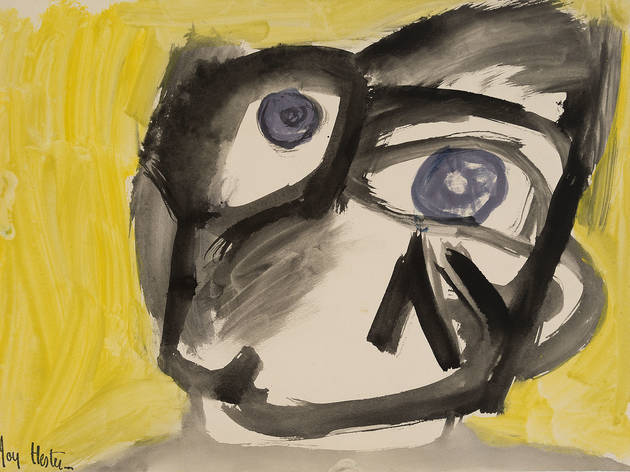 Update 09/06/20: Heide will reopen from Tuesday, June 30 with physical distancing measures, capacity limits and plenty of hand san.   Heide Museum of Modern Art is celebrating the 100th anniversary of Joy Hester’s birth with a huge survey of the artist’s work. Joy Hester: Remember Me encompasses more than 130 works from the Melbourne artist, spanning her earliest drawings as a student to her famously emotive ink paintings.  Hester shares a strong connection with Heide. She was a member of the Angry Penguins movement which was based at the homestead of John and Sunday Reed – which now forms part of the Heide Museum of Modern Art complex.  During her lifetime, Hester’s art struggled to find the commercial success experienced by other members of the Angry Penguins (such as her husband Albert Tucker). Hester’s signature ink wash paintings were commonly seen as too dark and angsty by critics – she was also a practicing artist in a time of strictly enforced gender roles, a fact that potentially affected her ability to sell works. These days Hester is regarded as one of Australia’s most important Modernist artists and a pioneer for women in the creative industries. Hester produced works that fearlessly portrayed her visions on sex, death, birth and illness as her diagnosis of Hodgkins Lymphoma deeply affected her work. Joy Hester: Remember Me features works from some of the artist’s most renowned series such as ‘Incredible Night Dreams’, ‘Faces’, ‘Lovers’, and ‘Girls’. Joy Hester: R 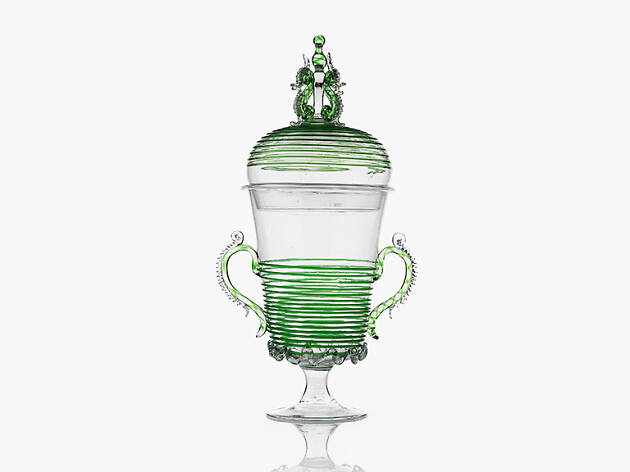 Venetian glass is known across the world for its vibrant colour, elaborate designs and exquisite craftsmanship, honed over centuries by traditional glassblowers on the Venetian island of Murano. In Liquid Light, the National Gallery of Victoria brings together their extensive collection of glass pieces to explore the development of the Venetian glass tradition, from the Golden Age of the 16th century to the postmodern creations of the Memphis Group. Highlights include a Games of Thrones-worthy 17th century goblet, complete with intertwining dragons coiling around the stem, and a contemporary patchwork vase by renowned Murano glass artist Fulvio Bianconi. 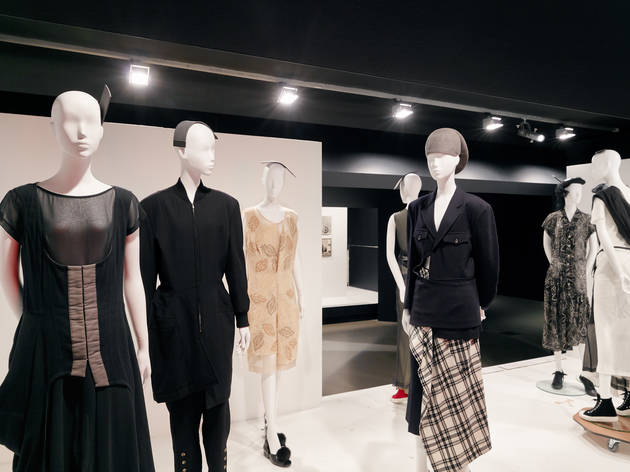 The National Gallery of Victoria has always been quite forward-thinking in its integration of design and fashion into its exhibition program, but it also has a hugely impressive collection of design, including a heap of pieces from Japanese label Comme des Garçons. The label is led by founder and designer Rei Kawakubo, who has been creating innovative fashion since the 1970s, and is continuing on that journey today. The NGV collection includes key pieces by Kawakubo, which are being shown in this free exhibition. They've been donated by Takamasa Takahashi since 2005, and together show how Kawakubo's designs challenged tradition to create a new fashion vocabulary. The pieces range from 1981, when Kawakubo first showed work in Paris, to recent designs from the 2014 'Blood and Roses' collection. 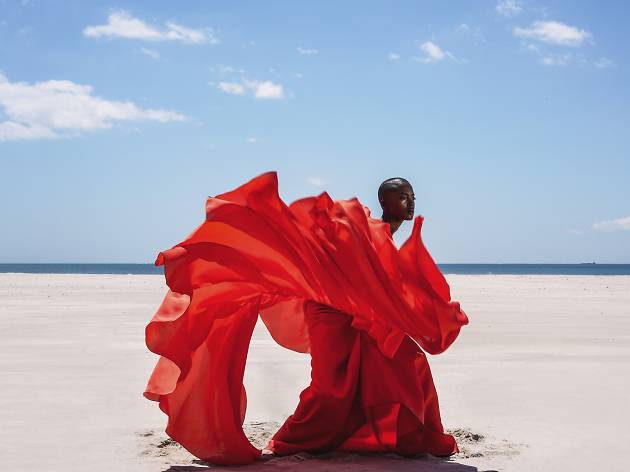 In 2018, Tyler Mitchell became the first African-American photographer to shoot the cover of US Vogue, when his image of Beyoncé became the face of the magazine’s September edition. Mitchell is one of 15 emerging and established Black photographers featured in The New Black Vanguard: Photography between Art and Fashion, which comes to Bunjil Place Gallery as part of the Photo 2020 International Festival of Photography. With photographers hailing from London to Lagos, the exhibition challenges the idea of blackness as homogenous, and explores ideas around beauty, race and gender. Accompanying it will be Luke Willis Thompson’s video work autoportrait 2017, a silent portrait of Diamond Phillips, who made headlines in 2016 when she live-streamed the fatal shooting of her boyfriend by a Minnesotan police officer. Bunjil Place will reopen on Wednesday, July 1. It is still free to view The New Black Vanguard, but you must book tickets in advance. Until then, you can enjoy The New Black Vanguard through a virtual tour. You can explore the tour at your own pace, select highlights or get a quick overview of the exhibition by watching this short video walkthrough. The online tour will be available until September 2020. 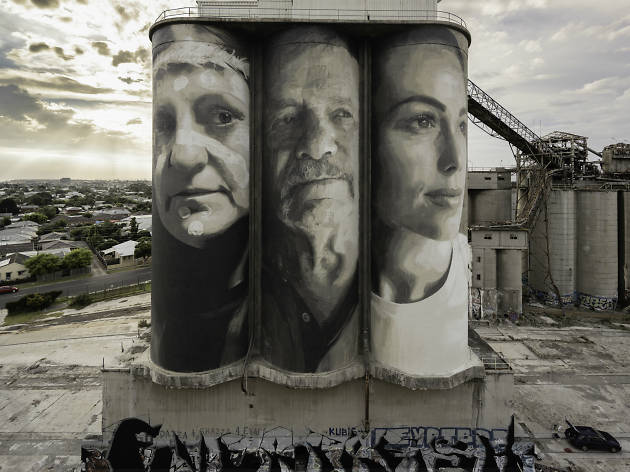 Over the last 20 years, street artist Rone has cemented himself as one of Australia’s most successful street artists. The artist (real name Tyrone Wright) has carved himself a niche in the world of urban art by routinely taking over abandoned places and distressed spaces and filling them with large, despondent portraits of women.  What you might not know is that Rone is from Geelong and he’s returning there for his first survey exhibition. Rone in Geelong presents a comprehensive collection of work spanning Rone’s career, from his early stencils to photographs that show how he goes about transforming deserted buildings (you can also see one of these spaces recreated in 3D).  Geelong Gallery has also commissioned Rone to transform one of its most significant rooms – the Douglass Room – to reflect the gallery’s architecture, history and collection. Rone will work with interior stylist Carly Spooner to revamp the room, drawing additional inspiration from Venetian palazzos and trompe l’œil paintings (a painting technique that creates the illusion of three dimensions). True to form, the room will also feature an aloof-looking mural of a woman plus a haunting soundtrack by Nick Batterham.  Rone in Geelong is on at Geelong Gallery from May 30 to August 16. 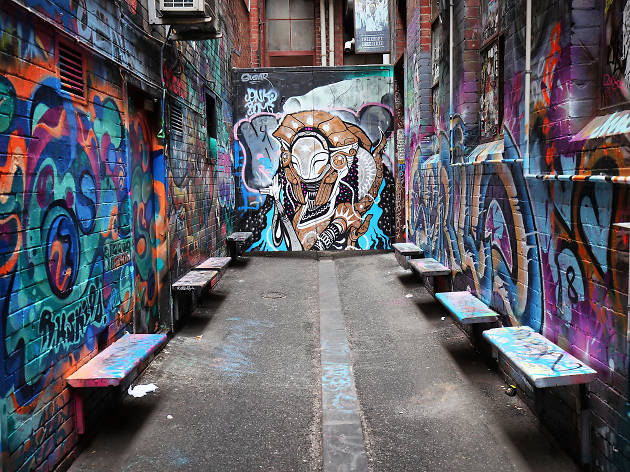 Sure, street art covers almost every nook and cranny of our creative, colourful city, but there are more highly concentrated clusters than others. These are the street art hotspots that any self-respecting 'grammer should be snapping: the city's ten best street mural hotspots, in all their spray-painted laneway glory.