Here in Melbourne we're lucky to have beaches close to the city that are both beautiful, god for swimming and family friendly. Melbourne's bay beaches are a terrific place to spend some time outside, whether you're keen on swimming, wading, beachcombing or just relaxing on the sand. Here are our pick of the best beaches in Melbourne.

Here are Melbourne's best picnic spots for those looking to dine outside, plus our city's best walking trails for anyone looking for a brisk stroll.

The best beaches in Melbourne 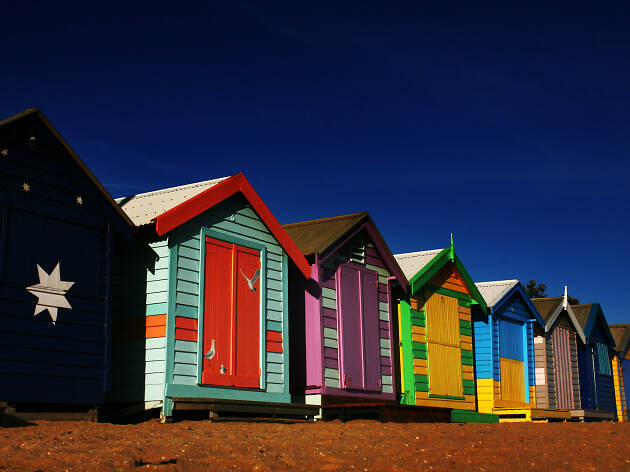 Eighty-two charming little bright, multi-coloured bathing boxes line the foreshore at Brighton beach, which is an ideal spot for swimmers, sunbathers and surfers alike. When the wind picks up, there are some pretty decent waves and the rip holes spotted around the place make for some pretty decent fishing as well. The beach is also just a short walk from all the restaurants, galleries and cafés that make Brighton one of the most popular upmarket suburbs. 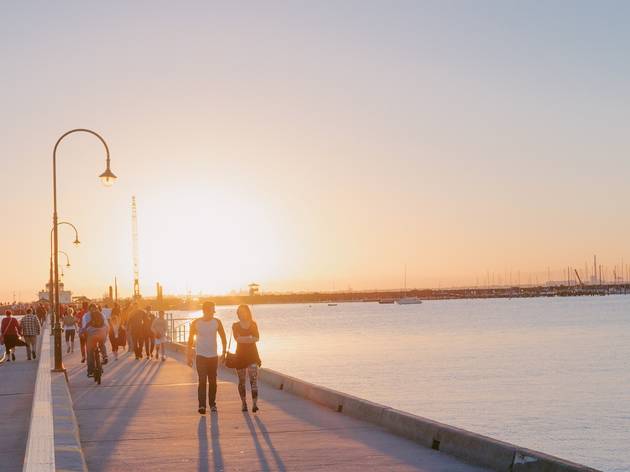 St Kilda Beach is a hotspot for tourists and locals – like Bondi without the crowds and camera crews. The ocean, while practically wave-free, is great for all water sports, with kite surfers jostling for air space around West Beach and paddle-boarders wobbling hither and thither. The shore is lined with palm trees and a wide boardwalk that attracts cyclists and other wheeled interlopers. The extra bonus with lounging about on St Kilda sand is how close it is to all the trendy cafés and restaurants on Acland Street – and Luna Park, of course. 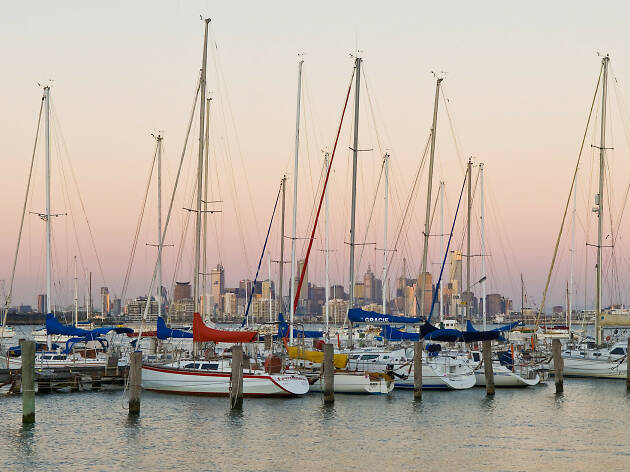 Known to the locals as ‘Willy Beach’, this relatively small beauty spot is only a stone’s throw away from the city. It’s a popular beach for swimmers, sunbakers and sailors, but it’s the spectacular views that draw people into historic Williamstown. Just a five minute walk from the train station is Gem Pier, which boasts a clear, unobscured view of the city skyline – beautiful by day and spectacular by night. It’s no wonder Williamstown is such a hotspot on New Year’s Eve, with the fireworks on full display. 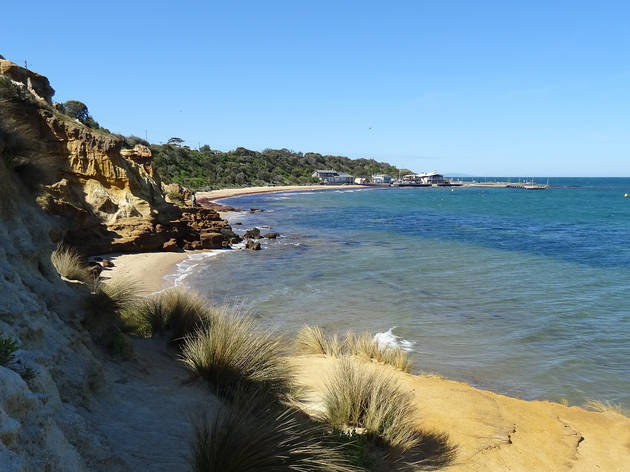 Half Moon Bay is a secluded, blue-and-yellow postcard of a beach that reveals a fascinating piece of maritime history. Not too far from the shore lies the HMVS Cerberus: a 1870s battleship that was scuttled in the bay in 1926 to create a breakwater for the Black Rock Yacht Club. Named for its crescent shape, the bay is protected from weather and is popular for boating, but is equally perfect for swimming in calm waters. 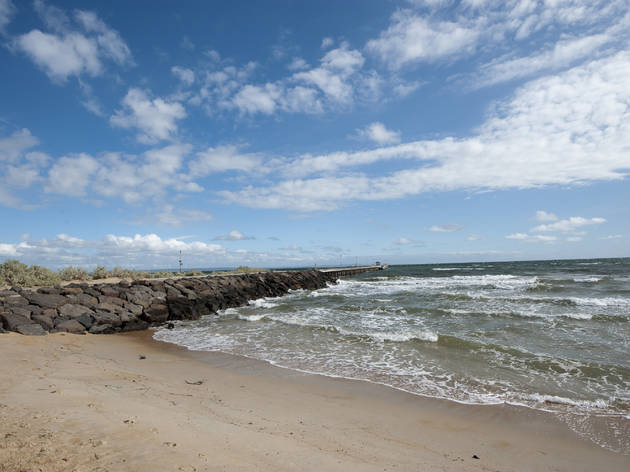 If you’re looking for a beach that has more than just sand and water, Mordi, a southeast suburb, is the place to go. There’s a restaurant – Sunny Boy Beach Club, a playground, BBQ and picnic areas, a bike path that runs all the way back to Mentone and a weathered but sturdy pier that stretches out 300 metres. It’s a popular family beach so if you want to avoid big crowds, head out during the week.

The best beaches just outside Melbourne 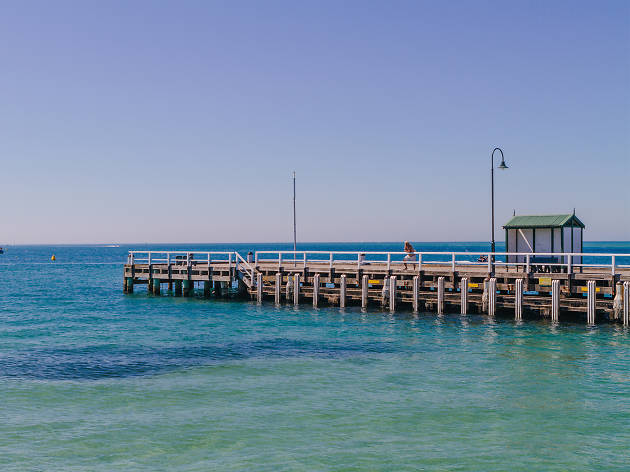 On the southern-most point of the Bay, 90 minutes out of the CBD, is an absolute gem of a beach in Sorrento. Straddling the waters of Port Phillip Bay on one side and Bass Straight on the other, it's the perfect spot for a sunset. It's backed entirely by the scenic foreshore and has popular jetties on the waterfront, complete with walking trails – well worth a road trip around the Bay. 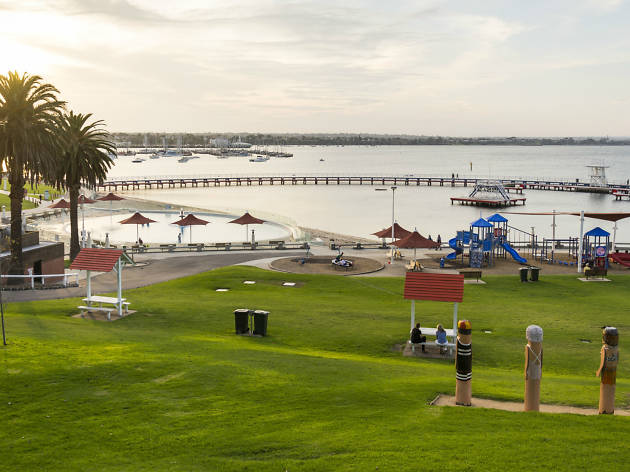 If you like the idea of ocean swimming but are low-key terrified of rips, sharks and seaweed, then Eastern Beach is perfect for you. The Geelong city beach features a picturesque promenade lined by palm trees, beach volleyball nets, a splash pool for small children and an enclosed ocean pool with dive boards and towers. Plus, there is a stretch of sandy open beach too for the fearless swimmers.

More places to swim in Melbourne 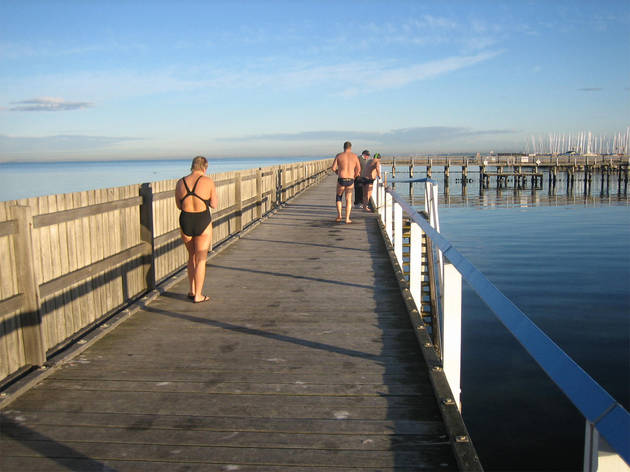 Pick a day over 30, hit one of these urban oases and drag your towel to a spare bit of premium pool real estate to soak up some rays.