In New York, everybody’s a little Jewish—and a little Italian, and Chinese, and Caribbean, and the list goes on and on and on. That’s because NYC isn’t just a melting pot. It’s the melting pot, a mélange of too many tasty ingredients in too small a cooking vessel. But wherever you’re from, once you’re here, you’re a New Yorker. And if there’s one thing a New Yorker knows how to do well, it’s eat. From iconic sandwiches to steamy soup dumplings to, duh, pizza, here are 12 essential NYC dishes you need to try if you want to eat like a local.

How to eat like a local in New York 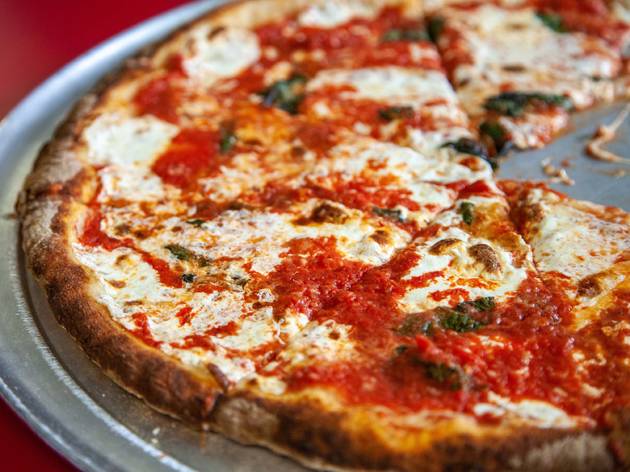 Let’s get the obvious one out of the way, shall we? Whether it’s stand-up dollar slices or sit-down restaurant rounds, nowhere in America does pizza better than New York—nope, not Chicago, not St. Louis, not New Haven. Our only real ’za rival on the planet is the motherland itself, Naples, which originated the coal-blistered specialty that Gennaro Lombardi first brought stateside when he started pulling pies on the Lower East Side in 1905. Italy might have invented it, but one bite of a classic New York slice—all gooey cheese pulls and tangy-sweet marinara pools atop a crust that’s the platonic ideal of crunch and chew—proves we perfected it.

Where to get it: You can get a decent slice pretty much anywhere in NYC, but if you really want it done right, you need to go where it’s done old-school. For a taste of coal-fired pizza history, head to two deep-Brooklyn legends: Totonno’s in Coney Island and Di Fara Pizza in Midwood. 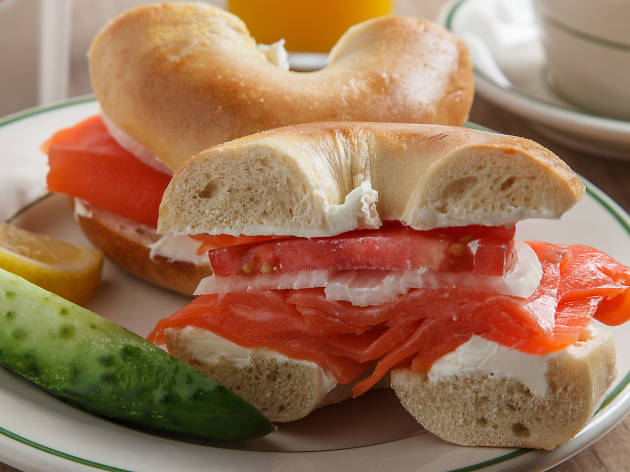 Is a Sunday morning in New York complete without, one, a hangover and, two, a trip to the deli for a little lox-and-schmear cure-all? The specific origins of the sandwich are dubious—we know that bagels weren’t created in New York, nor was creamed cheese or smoked salmon for that matter—but the gorgeous throuple was the result of the matchmaking skills of Jewish immigrants on the Lower East Side, who concocted the dish as a kosher alternative to that other brunch favorite, eggs Benedict. If there’s a better way to kick-off a weekend day than with the salty silkiness of Nova, a rich swipe of creamed cheese, and a crispy-yet-chewy fresh-baked bagel, we don’t know it.

Where to get it: If you’re downtown, obviously Russ & Daughters is the name to know—both the original appetizing shop and the cafe offshoot will satisfy your smoked-fish sandwich cravings. Uptown, Barney Greengrass is your man. 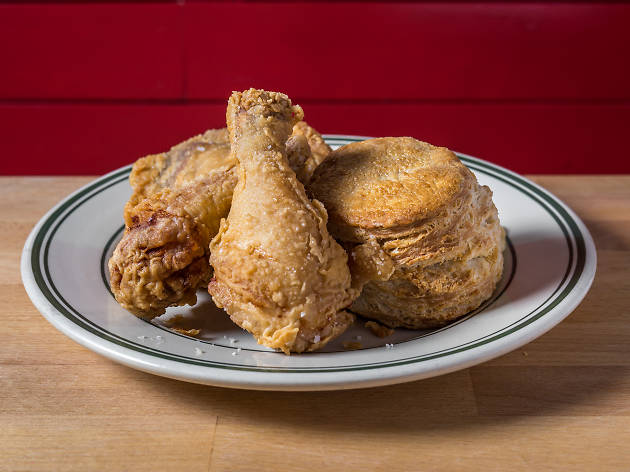 We know what you’re thinking—what the hell do these Yankees know about Southern-style fried chicken? Surprisingly, a lot. New York’s Harlem is the birthplace of chicken and waffles, a combo plate of deep-fried bird and deep-pocketed batter that first appeared on the menu of Well’s Supper Club in the 1930s as an after-hours meal for hungry-but-indecisive musicians like Sammy Davis Jr. and Nat King Cole. The sweet-and-savory creation has since migrated to soul-food joints all around town and continues to be a foolproof method for soaking up late-night libations.

Where to get it: Head uptown to the neighborhood where it all started and sink your fangs into the expertly fried fowl and waffles over at Amy Ruth’s. For something slightly more newfangled, Brooklyn’s Pies ‘n’ Thighs updates the traditional dish with cinnamon butter and baked apples. 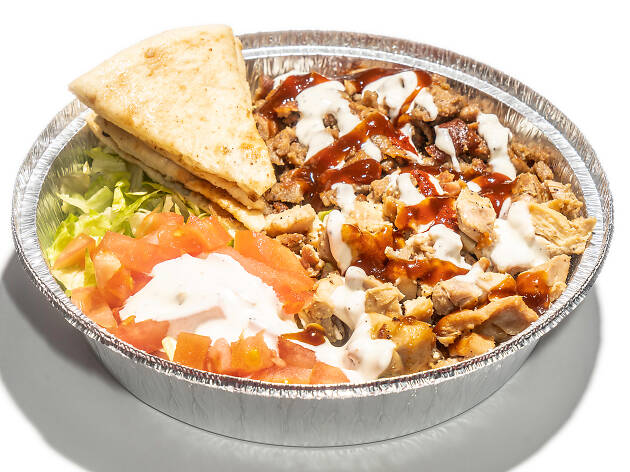 In some cities, the words “street meat” conjures images of long nights spent in the comfort of Imodium Multi-Symptom. But in New York, halal carts are a culture in and of themselves. The sidewalk staples began popping up in the ’80s, alongside the rise of Egyptian, Afghan, and Bangladeshi newcomers to the city. Halal traditionally refers to meat prepared by Muslim law, but the carts are plenty popular to diners of all denominations. Take the wraparound lunch lines hungry for combo platters of chicken and rice—iconically drizzled in a duo of sauces, the harissa-stained red and the tzatziki-esque white—as proof.

Where to get it: Midtown’s Halal Guys is the household name, serving its signature chicken and gyro platters since 1990, but the nearby Kwik Meal and its seasoned lamb over basmati is a worthy rival. 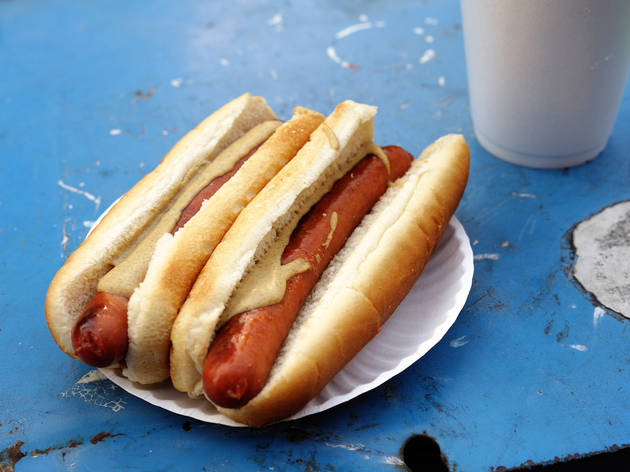 New York is a city that never stops moving—hence, some of our most quintessential dishes are foods that can both be made and munched quickly, ideally in one hand so that the other can continue trying to flag down a cab or fist pumping that hometown home run. Thus, the New York hot dog: Unlike the heavily festooned franks of Chicago, our tubesteaks are streamlined for maximum portability, descendants of the street-cart sausages doled out by German immigrants in the 19th century. You’ll find squirts of spicy brown mustard, sure, and maybe a tong’s worth of kraut or relish, but simplicity is our hallmark: Just a snappy all-beef red hot, plucked out of a vat of salted water and snuggled into a soft white bun.

Where to get it: The tubers at Nathan’s of Coney Island are world-famous (even the Queen of England has had one), but nearby Feltman’s serves better-tasting dogs with just as much historic charm. And for a deal that still can’t be beat, the Recession Special at Gray’s Papaya—two franks and a tropical drink for $5.50—is top dog. 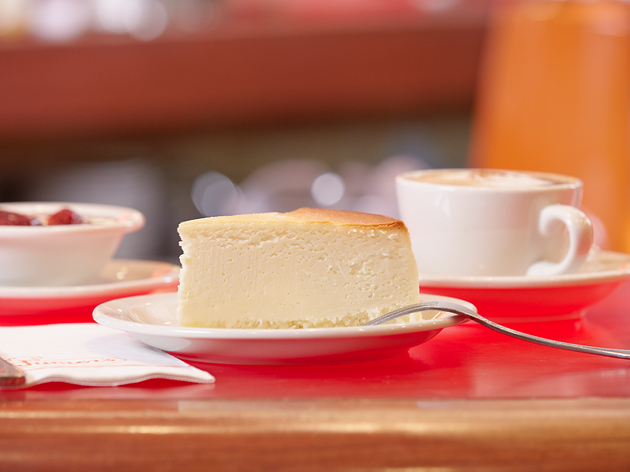 There’s cheesecake and then there’s New York cheesecake, a dense slice of crumbly graham-cracker crust and rich, lightly sweetened cream cheese that’s so damn good it needed its own category. Arnold Reuben—owner of The Turf Restaurant and and the namesake of a pretty famous sandwich—is credited with creating the New York–style dessert in the 1920s, subbing in smooth cream cheese in place of the cottage curds of the era’s cheese pies. In the century since, the cake has become a permanent fixture at Little Italy bakeries, old-school delis, and “Golden Girls” binge-watch parties alike.

Where to get it: Tourists flock to Brooklyn-born chain Junior’s, but if you want to eat like a real-deal local, Nolita’s aptly named Eileen’s Special Cheesecake is the spot for faithful, fluffy renditions of the New York classic. 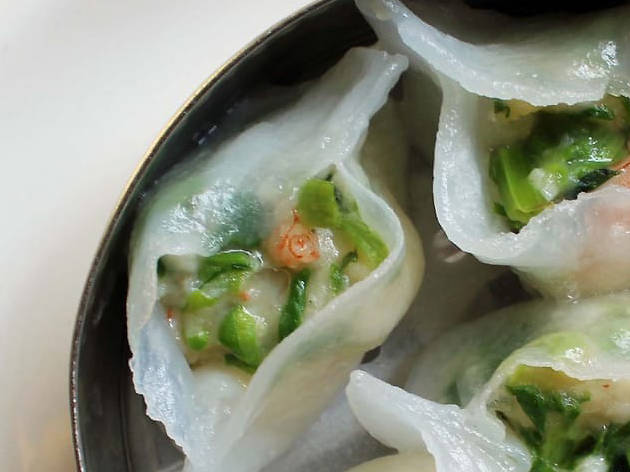 Some of the most vibrant corners of New York City are its three main Chinatowns, located in Manhattan, Flushing and Sunset Park. These colorful enclaves can turn crowded and chaotic come the weekend, with hungry locals clamoring for tables at banquet halls and har gow parlors to partake in that time-honored New York tradition, dim sum. The Cantonese answer to brunch, the morning meal is a push-cart parade of pork buns and egg tarts, rice noodle rolls and bamboo baskets steaming with delicate, dimpled xiaolongbao. Show appreciation (tap the table with your pointer and middle fingers as thanks when tea is poured), not hesitation (you best be quick with that punch ticket when ordering)—it’s the New York way.

Where to get it: History heads will be charmed by the oldest and quaintest dim sum den in the city, Nom Wah Tea Parlor on Doyers Street. For something bigger, more boisterous, and more Brooklyn, check out Bamboo Garden in Sunset Park. 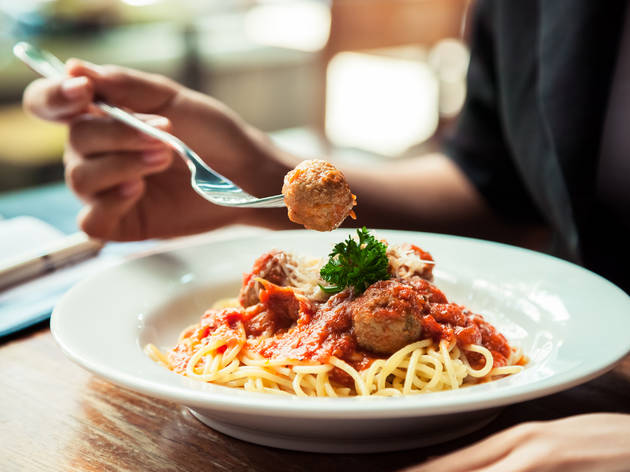 In New York, you can have Sunday supper any night of the week. Whether you call it sauce or gravy, the red-sauce tradition was brought to our fair city in heaping portions by Italian immigrants in the late 19th and early 20th century. They cornered out their own little Italys across the boroughs, dishing out food that was a little Italian, a little American, and very New York. Nowadays, the red-sauce experience is equally defined by food—the veal parm, the linguine clam, the fried galamad (that’s calamari, for those not fluent in Brooklynese)—and atmosphere: The tables should be clothed, the waiters should be bowtied, and the whole production should look like Martin Scorcese directed it well before you were born.

Where to get it: If you know a guy who knows a guy, you can try for a table at the perpetually-booked Rao’s in East Harlem. Slightly easier to get into, though, are outer-borough old-timers like Don Peppe’s in Ozone Park and Bamonte’s in Williamsburg, which serve red-sauce classics like your nonna used to make. 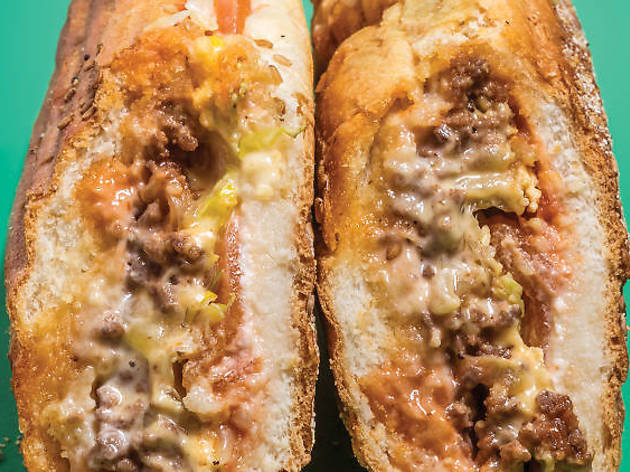 Sure, the bacon egg and cheese may be the most popular of bodega orders, but the chopped cheese just may be the most beloved. Born in the nondescript corner stores of Harlem, Queens, and the Bronx, the grill-top sandwich is built with ground beef, gooey cheese, griddled onions and condiments, a literal hometown hero that tastes like the meaty cross between a beef burger and a Philly cheesesteak. The BEC may have entered the global lexicon—Margot Robbie is eating ’em in comic-book movies, for chrissakes—but the chopped cheese is still local lingo, the kind of in-the-know deli order that could earn you that illusive nod of respect from your bodega guy.

Where to get it: People know it by many names—Hajji’s, Blue Sky Deli, Harlem Taste—but the one thing they can all agree about the East Harlem storefront at 2135 First Avenue is the excellent chopped cheese, said to be created here. 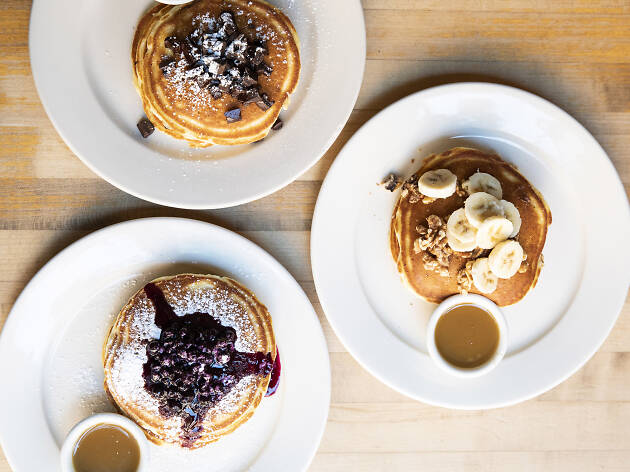 Where to get it: The maple buttered version at Clinton St. Baking Company on the LES gets its famous fluff from whipped egg whites, while the golden-brown beauties at Williamsburg’s Chez Ma Tante use more yolks than whites for maximum richness. 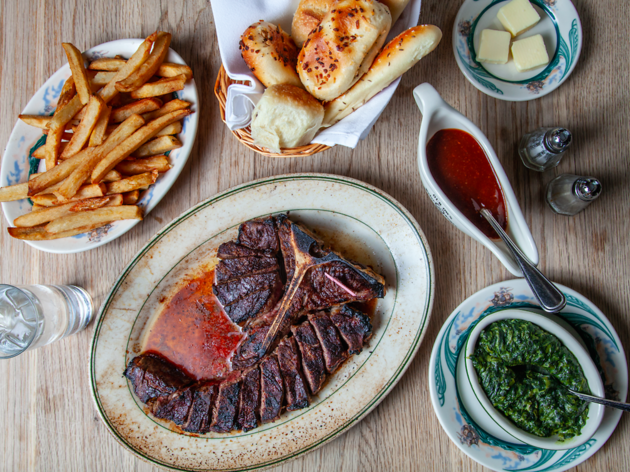 Welcoming celebratory local families and city power players alike, the steakhouse is as much a New York ideal as the Statue of Liberty. These prime-meat palaces—where all things mineral funk and medium rare reign—make up the most rustic subgenre of the city’s fine dining scene: Platters of steak-for-two spooned over with still-sizzling fat, tables littered with dishes of creamed spinach and Caesar salad, and martinis clanking as waiters bellow over the phone that, no, they still don’t take credit cards. Like the city it’s in, the steakhouse boasts a hard-earned swagger, and there’s no more baller order than a dry-aged porterhouse to share (or not).

Where to get it: The city’s most iconic chophouse is Peter Luger, which has been carving high-quality carne in Williamsburg since 1887. For a newer take on the nostalgic form, seek out St. Anselm a few blocks north. 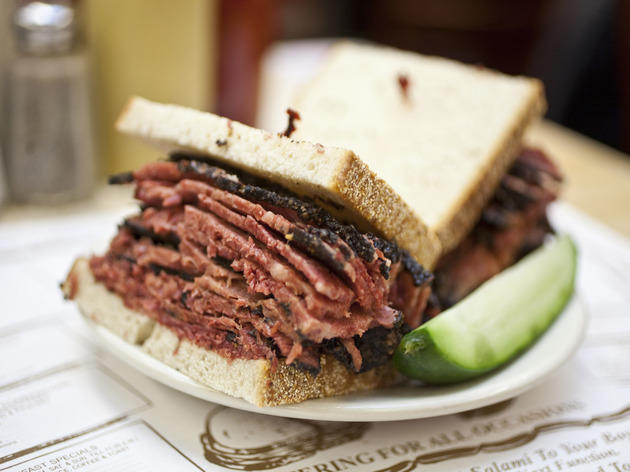 In a city that loves its sandwiches, it’s the O.G.: A heaping hulk of hand-cut beef that’s been lovingly brined, seasoned, and smoked before it gets loaded onto lightly sour slices of rye, with zippy brown mustard and a ubiquitous dill pickle on the side. Legend has it that Sussman Volk, an Orthodex Jewish immigrant from Lithuania, served the first pastrami on rye at his Delancey Street delicatessen back in 1887, though that origin story has faced contention from the crew over at Katz’s, which opened a year later and are still famously slinging the meaty sandwich to this very day. Wherever it came from, we’re just happy it made it here.

Where to get it: Katz’s is king, obviously—it’s the stuff (fake) orgasms are made of. But we love the reverentially new-fashioned version at Frankel’s Delicatessen & Appetizing in Greenpoint, too.