If anyone needs to escape NYC, it’s a New Yorker. When the pressure of living in Gotham becomes too much, our damn-good list of summer getaways offer a fresh perspective and a pleasant change of scenery. After spending some time at nearby destinations like quaint seaside hamlets in the Hamptons, going glamping in New York or trying amazing meals at less-busy restaurants in neighboring towns, you’ll feel relaxed, recentered and ready to return to the beautiful city you call home. Whether you’re searching for beaches or outstanding summer music festivals on the east coast, we’ve got your ideal summer getaways right here. 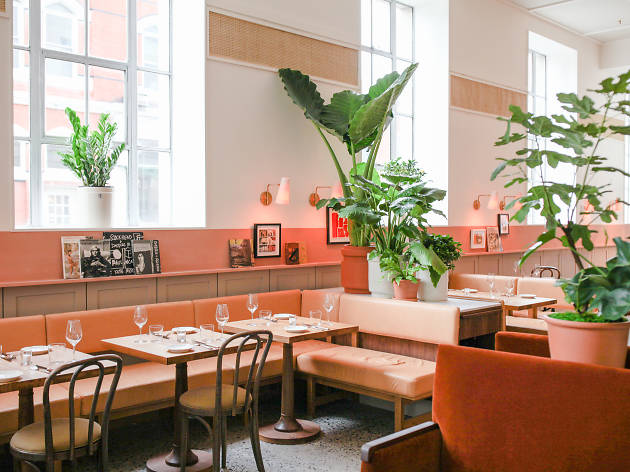 New York State’s former capital has only gotten better with age. Establishing chef-inspired restaurants, music-driven bars and arty boutiques, a steady stream of creative entrepreneurs has made Kingston au courant once more, restoring the prime location as a perfect home base for exploring the Hudson Valley.

Stay: Proving that Kingston has the chops to be an elegant escape, four historic buildings have joined together to form the sparkling new Hotel Kinsley (summer rates from $235), the town’s first destination accommodations. The smart, cozy rooms are graced with a distinct Scandinavian flair, and check-in takes place in a former bank vault—cha-ching!

Eat: Get a sense of Kingston’s range at Lis Bar, where modern, tapas-style dishes are punctuated with Polish flavors. We recommend the sour rye soup, the beet pasta with dandelion pesto or the rhubarb-filled doughnuts. They’re worth the trip alone. 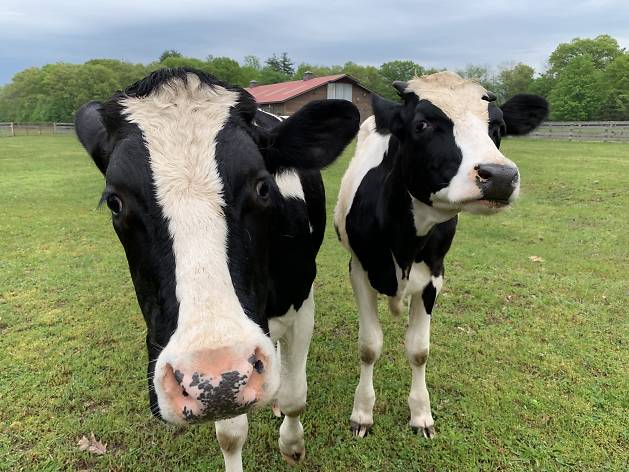 They may all be born with sweet-baby-angel faces, but seeing pizza rats and trapped pigeons on the subway is a lot to handle. Hightail it to High Falls’ Woodstock Farm Sanctuary, where cuddly creatures roam the nonprofit’s 150 acres. Whether you’re volunteering (go you!) or just basking in the pastoral experience, you’ll meet some of the 380 rescued farm animals, including Dolly the llama, Puddles the duck, Maybelle the cow, Tammy the lamb, Cici the piggy, Luna the goat and Luna’s brother Louie (he’s shy, but he’ll snuggle if you’re patient).

Stay: Speaking of getting snuggly, the sanctuary just debuted
The Gray Barn (summer rates from $250), a modern five-bedroom guesthouse that overlooks a goat pasture. Wave to Luna and Louie while you’re munching away at your complimentary vegan breakfast. 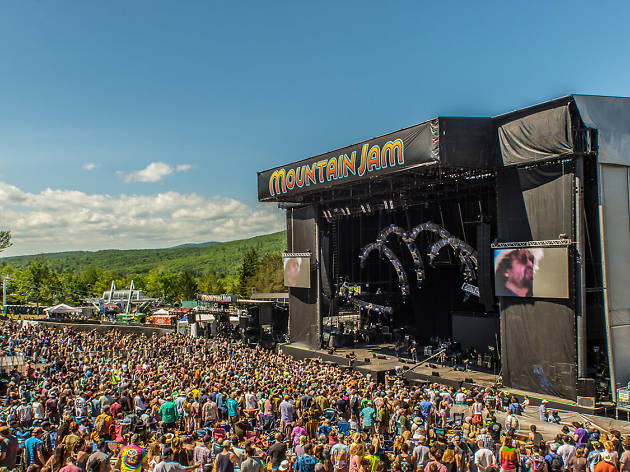 Yeah, Governors Ball and SummerStage are great and all, but when you’re itching for a change of scenery—particularly something a bit greener—attending a jam sesh in the mountains sounds like music to our ears. You’ll get just that during Mountain Jam, a three-day fete which has moved to the site of Woodstock drawing major chart-toppers and indie-rock gods like The Avett Brothers, The Revivalists and country all-stars like Willie Nelson & Family.

You can pay extra to camp on-site, but if you don’t feel like roughin' it, The Kartrite Resort & Indoor Water Park offers luxurious lodging that lets you to enjoy the beauty of nature minus the dirt and mosquitos. You’ll appreciate the chance to relax and cool off at the water park after a day of rocking out at the shows. 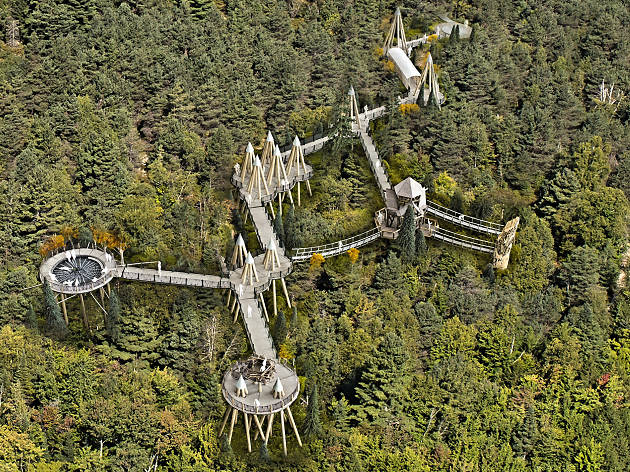 You’re already familiar with the High Line, but have you been to the majestic elevated park of the Adirondacks? We’ve been, and it’s called Wild Walk—an 81-acre museum complex, which literally lets you see the forest of upstate New York through the trees. Designed by Charles P. Reay, the innovative walkway takes you up and over the forest canopy for a truly breathtaking view, and a revelatory look at the dense and expansive landscape. Wander through exhibits like a giant spider web that is 24 feet above ground as well as the highest point, the Raptor’s Nest, where you have a clear view of the gorgeous vista and landmarks like the Whiteface Mountain and Seward Range.

When you tire of walking on the wild side, retire for the evening at the gorgeous Hotel Saranac, a historical building that has transformed into a modern haven. The hotel is positioned to offer the best of the natural world with nearby hiking trails and lake activites as well as bumpin’ nightlife for urban dwellers. The area’s downtown scene is equipped with art galleries, street musicians and performance spaces like Pendragon Theater or Blueseed Studios for your entertainment. The dining options are also ace, but we recommend stumbling into the french-themed Left Bank Cafe for its tender poulet basquaise, generous charcuterie plate and impressive wine list. 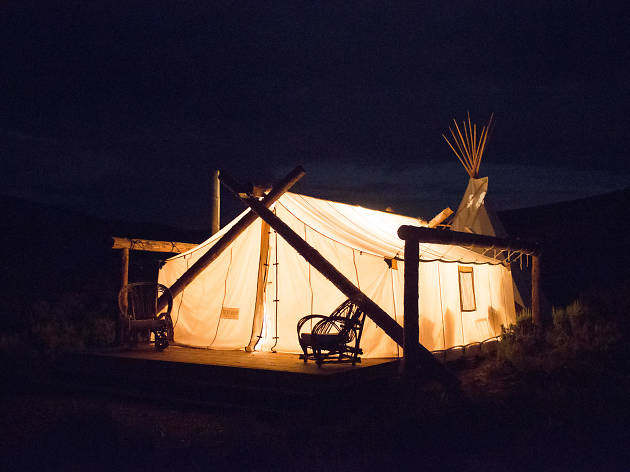 Thanks to Governors Island, you don’t have to travel very far to sleep in a picturesque tent from Collective Retreats. But if a ferry ride isn’t enough distance for you, head to Hudson Valley to camp out on Liberty Farms. The bucolic grounds feature an equestrian center, plus an organic working farm. Your stay includes complementary breakfast (yogurt, homemade granola, omelets, waffles—the works) served at the Three Peaks Lodge. You can even dine in your own tent, if you prefer privacy.

After walking through nature trails such as High Falls Conservation Area (an easy trek featuring a 150-foot waterfall) or climbing Mount Everett (good for advanced hikers), drive up to local vino proprietor Hudson-Chatham Winery. Their tasting room is open from noon to 5pm Wednesday through Sunday. Before you head back to glamp, drive to Taconic Sculpture Park to peep at three acres-worth of mythical-themed sculptures. 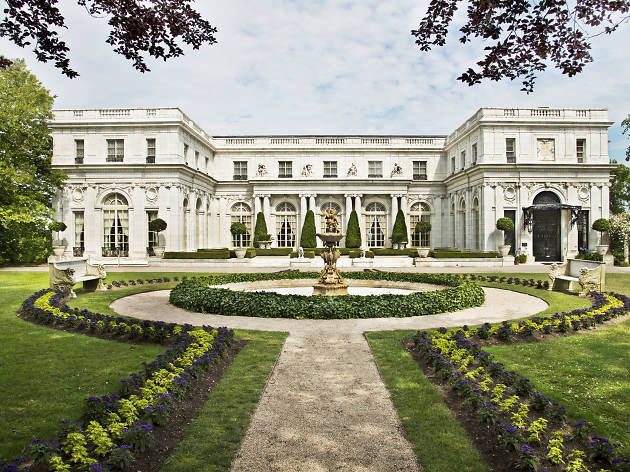 If you want to treat yourself to a swanky summer getaway, Newport, Rhode Island is bursting with finesse resorts, fancy waterfront restaurants and swanky mansions you can visit and pretend you’re a Vanderbilt. Be floored by the views when you stay at Gurney's Newport located on a private island surrounding Narragansett Bay. Get unreal 360-degree views of the sunset and lounge on the wrap-around deck. Practice your backstroke in the outdoor saltwater pool and unwind with a massage from the full-service spa.

Once you’re pampered and immersed in the exterior beauty of the Rhode Island, head indoors to enjoy the lavish properties known as Newport Mansions. Guided tours are available for Chateau-sur-Mer, Chepstow, Hunter House, Isaac Bell House and Kingscote. Afterward, feast like a debauchee and go in on some lobster claws at The Mooring—an indoor and outdoor top-of-the-catch seafood restaurant. 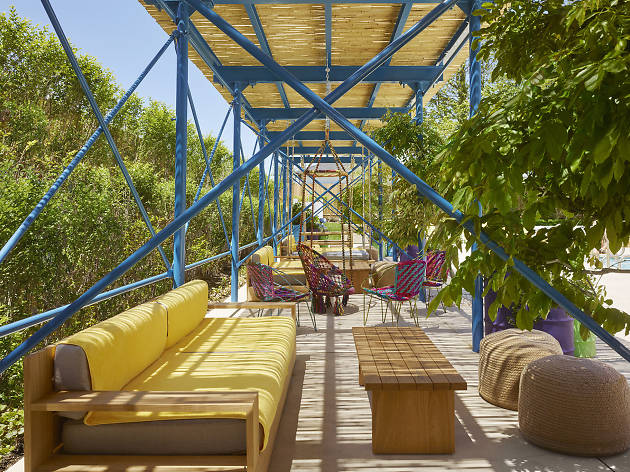 Asbury Park got famous as the place Bruce Springsteen and the E Street Band broke onto the scene. But as of this summer, its legendary rock club, the Stone Pony, will get some healthy competition. Asbury Lanes, the retro-fab bowling alley and snack-and-cocktail bar that closed in 2015, just reopened as a 600-person-capacity concert venue. The Lanes’ lineup is already a powerhouse, with Tennis, Kurt Vile and Lupe Fiasco hitting the stage this summer (and, on June 18, none other than the Boss himself). Plus, the actual bowling lanes remain, with a fancy new pin-setting  system.

Set in a once-deserted Salvation Army building, the trendy Asbury Hotel ($165–$355 a night) now has it all: a rooftop bar, outdoor movies, food trucks, live music, summery black-and-white photos from the city’s past and even eight-person bunks, in case you’re traveling with a crew.

Just a few blocks from the boardwalk, Kim Marie’s Eat n Drink Away is a wood-covered, homey hang that boasts a bangin’ hangover burger, with shore fries (thick-cut, with skins), bacon, oozing cheese and a fried egg. 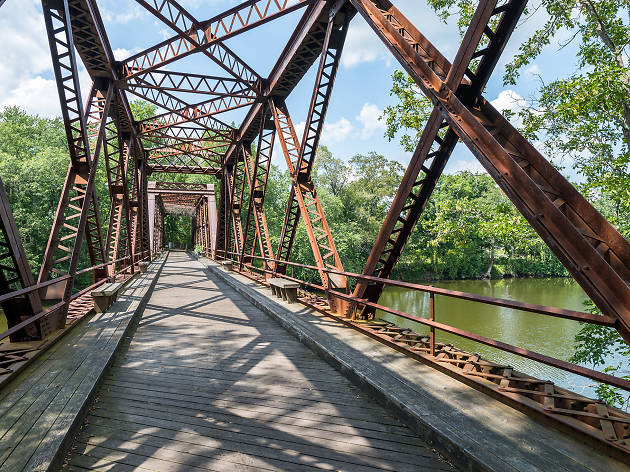 The ruggedly beautiful Catskill Mountains have a multicentury history of creative inspiration and adventure. Washington Irving set “Rip Van Winkle” among their peaks, and Thomas Cole’s paintings of the area wound up radically changing how artists depict landscapes. For a peek of what these folks found so inspiring, take the Hudson River School of Art Trail, which starts at Thomas Cole National Historic Site, and bask in views like the 260-foot-drop of Kaaterskill Falls.

This respite isn’t strictly about historical appreciation, though. In the past few years, that old Catskill creativity has extended to mountain-modern hotel options like Scribner’s Catskill Lodge. A hotshot design firm from Brooklyn (where else?) revamped the ’60s motor lodge last year into a 38-room boutique hotel that we describe as mountain-man sleek, with curvy gray couches near sharp Adirondack chairs, all set off by colorful boho textiles.

The views are of course lovely, but if you’re jonesing for more adrenaline, these days Catskill makes a better base camp than ever for mountain adventures. Zoom at 600 feet in the air with New York Zipline Adventures. 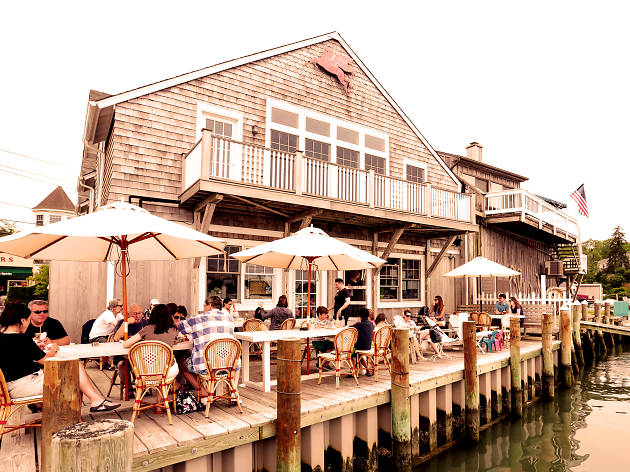 It’s right there, between Long Island’s North and South Forks, and yet Shelter Island is easy to miss: Yes, the 12.5-square-mile isle is small—in fact, the Mashomack Preserve occupies a third of its area—and it’s only accessible by ferry. But don’t expect an empty expanse: While it’s totes low-key, it’s also replete with historic 19th-century neighborhoods, troves of beaches and plenty of local characters to help you soak in the surroundings. You can even explore an intact 18th-century home at the Shelter Island Historical Society.

Stay: Perched over Shelter Island Heights, The Chequit (summer rates from $275) stands out in all the right ways. Originally built as a Methodist dining hall, a cozier-than-thou renovation transformed the property into a stylishly sweet boutique that whips up a decadent complimentary breakfast.

Eat: Breakfast, lunch, picnic, whatever: It’s all up for grabs at Marie Eiffel Market, a dockside establishment where natives and visitors gather for great bites, such as lobster rolls and pillowy pain au chocolat. 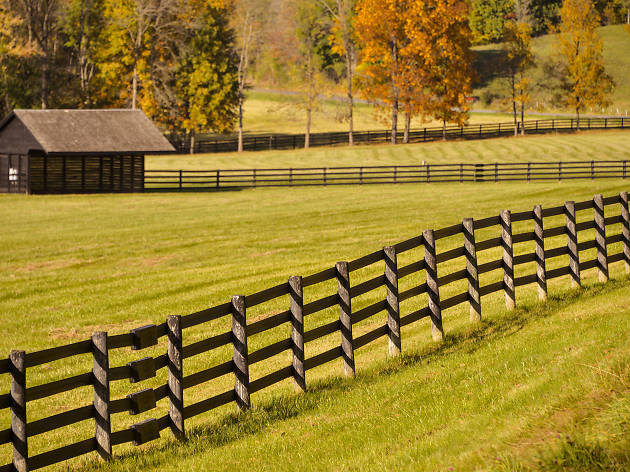 If the Victorians had a Vegas, Saratoga Springs would’ve been it. The resort town got famous in the 1800s for its relaxed vacay options, namely legendary spring water and thoroughbred racing (which included gambling, natch), and you can still soak in the little-bit-tingly rich-in-minerals H2O in the Roosevelt Baths and Spa within Saratoga Spa State Park. If you’ve never bathed in warm champagne, here’s your chance to get that sensation for a cool $45, which includes a robe and access to a sauna, an elegant relaxation room and a 40-minute bathtub soak.

Once you’re relaxed, it’s time for the ponies. Bring your poshest sun hat to the United States’ oldest horse-racing track, the Saratoga Race Course, which hosts the Travers Stakes and others on weekends from late July through early September. From the grandstand, gamblers can watch these majestic creatures battle it out. Afterward, visit the National Museum of Racing and Hall of Fame. The spot’s racing simulator is so authentic, you have to wear a helmet and vest—jockeys use it too. And you can actually stay along the racetrack at the reimagined Brentwood Hotel, where rooms are accented with antique brass.

Outside the track, Saratoga Springs has held onto its atmospheric core of old buildings downtown (Victorian, Federal and neoclassical, for you design fiends), but these days its also emits a modern, eclectic college-town vibe with a mix of shops like Tushita Heaven, which offers New Agey incense burners and prayer beads. 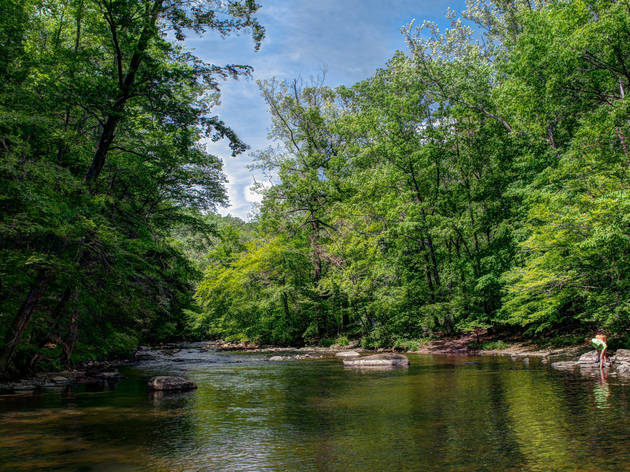 Don't have a car? No problem. Lace up those hiking boots and get out of the city with the best hiking near NYC.