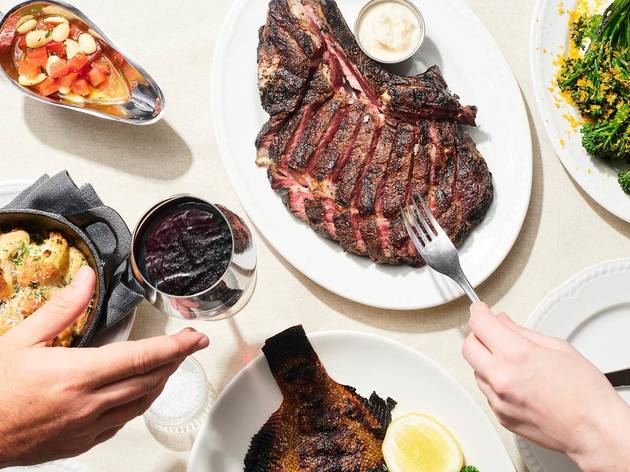 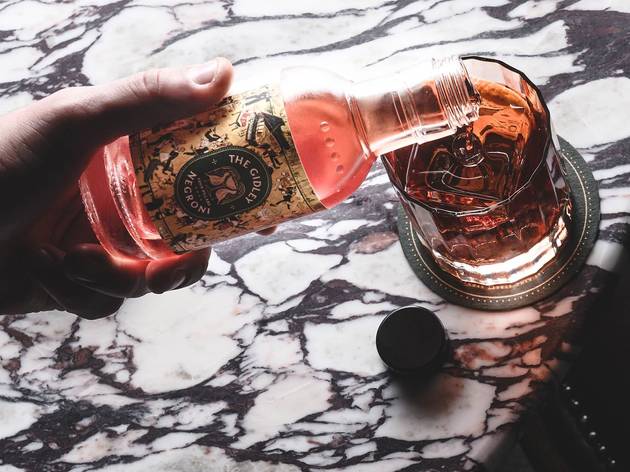 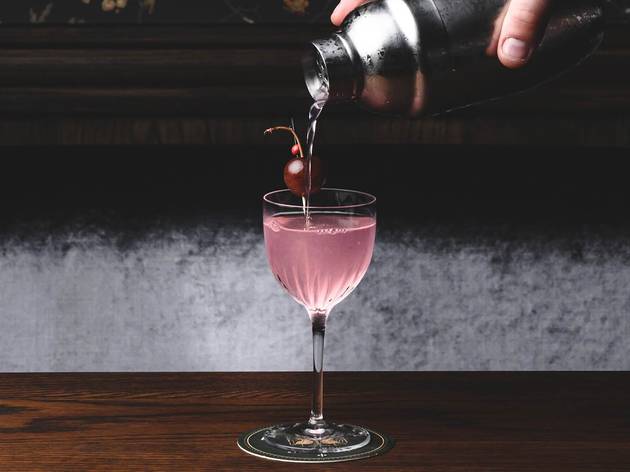 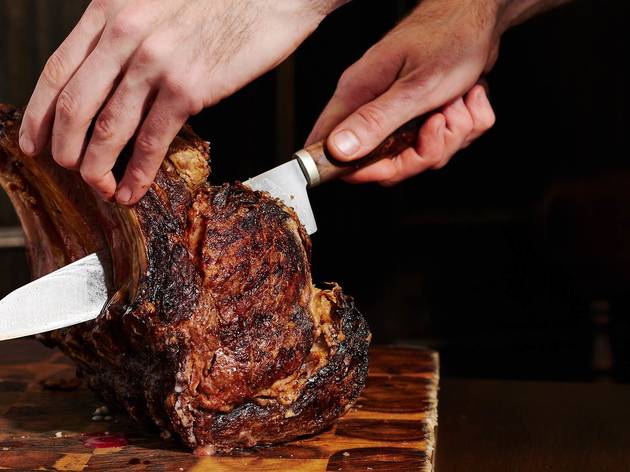 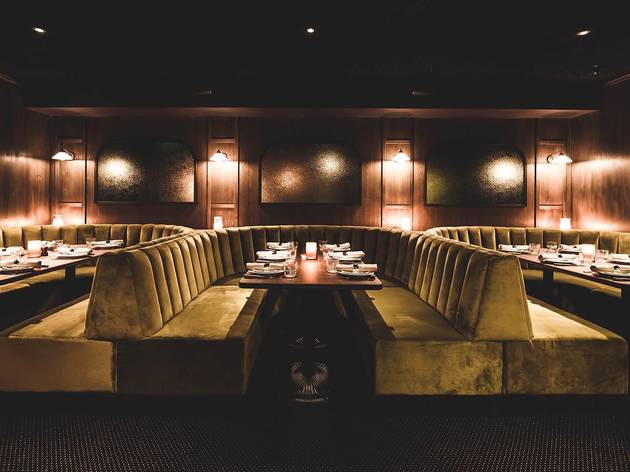 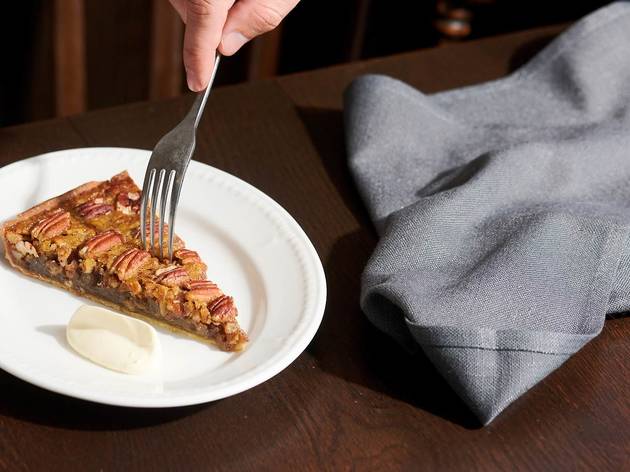 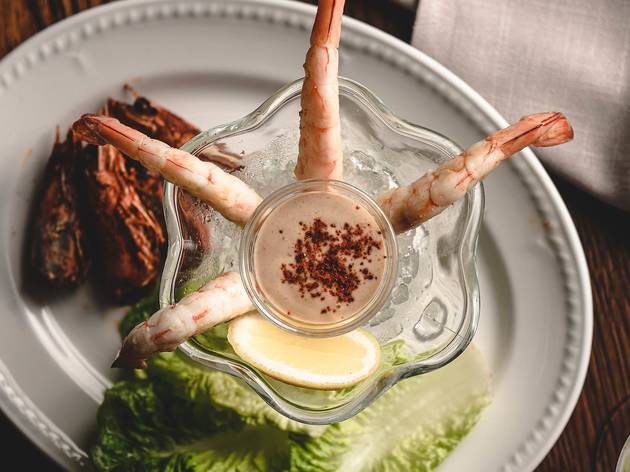 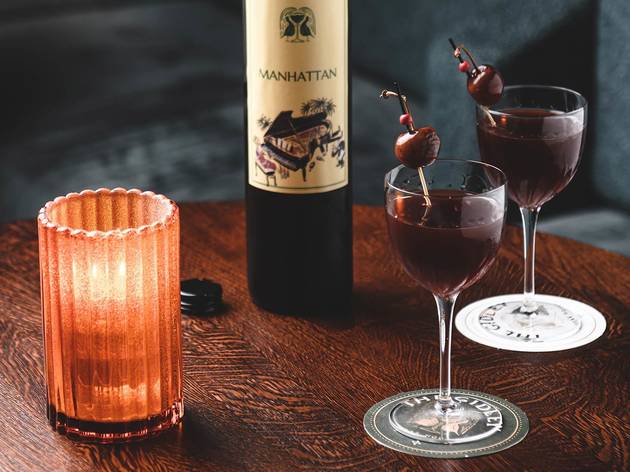 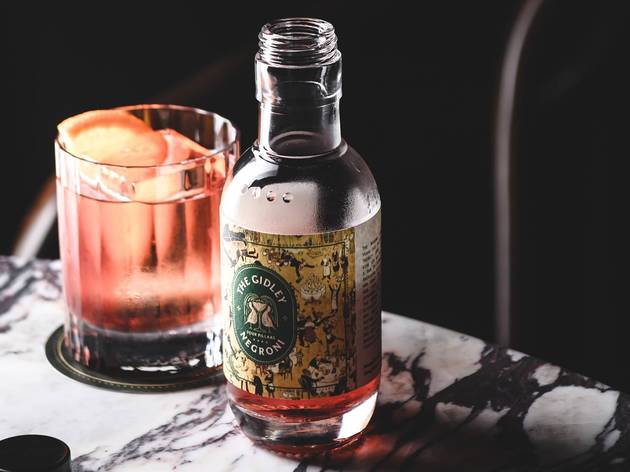 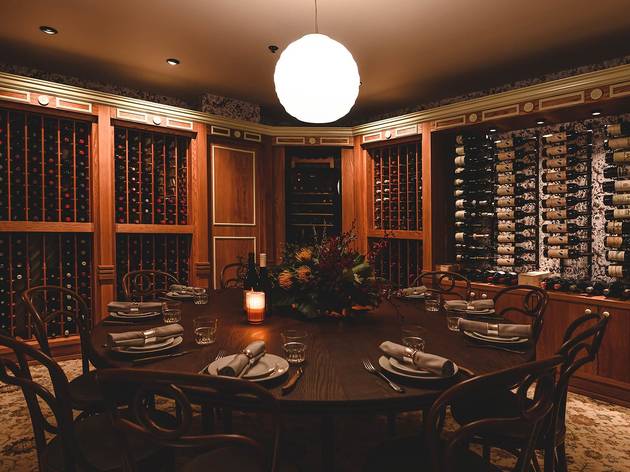 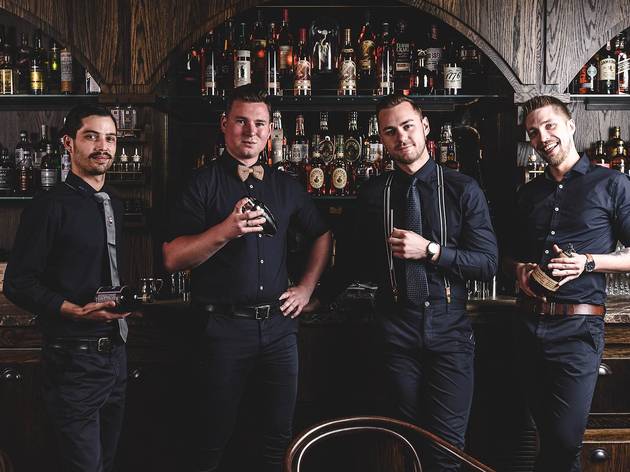 One minute you’re standing outside an unmarked charcoal-grey door in the CBD with King Street traffic rushing behind you, next minute you’re buzzed into the kind of stately home you’d expect to find in the Southern Highlands, or hunting country in the UK. At the Gidley, the second steak restaurant from the Liquor and Larder group who also own Bistecca, Grandma’s and the Wild Rover, a friendly host takes your jacket, walks you past the galley bar and into a velvet-lined booth, complete with curtains.

Once your table is ready you head around into the dining room – a soft, elegant space, masculine without being macho. Sure, there’s a whole lot of dark timber, muted tones and a ceiling blanketed in black, noise-absorbing material, but there’s also the ‘grandmother banquette’ upholstered in a chintzy floral fabric that lines one side of the room. Comfort is their watchword.

Picture a kind of later years Downton Abbey/Poirot does lunch setting and you’ll be bang on the money. The sense that you’re in a clubhouse is ably assisted by a menu of aristocratic comforts like oysters, caviar, crab cakes, terrine, a whole flounder, potato gratin and a Waldorf salad to go with your steak. But it’s the little flourishes that take dishes from their time warp and firmly into the realm of modern tastes, like prawn heads dusted in Old Bay, fried until crunchy, and wrapped up tight in a lettuce leaf, a bit like a Korean ssambap.

It’s possible to spend a truly eye-watering sum of money on steak in Sydney, but for a restaurant catering without exception to the comforts of habitual business lunchers, the Gidley is managing to keep prices in check, and a big part of that is due to the prime rib roast on the menu. Here they’re bringing and then slow-cooking the rib in a mustard rub for 12 hours in a sous vide before placing it over the charcoal grill to caramelise the crust. It’s served in either a 300g platter of thin, perfectly pink slices, or 700g in a thicker cut. Don’t need the spiritual hug that a roast provides? Why not order your rib eye on the bone by the 100g. But the baller move is to order the cap of the rib eye, the spinalis, for a big, rich flavour bomb in a small, tender cut.

This is not a restaurant that reveals all its secrets at the first greeting. You might not necessarily notice the wine room, with its semi-private dining table amongst the full vertical of Cullen Wines from the last 20 years, a feature of the wine list by sommelier Alice Massaria. There’s another dining room for private soirees, even if it’s just in aid of a luxe life screening of the State of Origin. But the real pearl is hiding in a small room along the hall. If you want to channel Vegas from the Rat Pack years, it helps to know that the Gidley possesses its very own private poker room with a custom-made card table.

Common wisdom suggests that clear signage is critical to the success of a hospitality venue. Some proprietors go so far as to stand out the front, waving menus and ushering in people from the street. Not so at the Gidley. Even a very confident person will pause at the top of the stairs leading down from the street and double check the address. But lack of signage has never prevented their venues from packing out to date, so you can chalk this one up to the “if it ain’t broke…” theory of hospitality management.