Where to eat, drink and explore in Echo Park

Get to know Echo Park with a visit to the Eastside neighborhood’s best restaurants, bars, shops and more

Though it often gets lumped together with its upscale neighbor Silver Lake, Echo Park has enough character of its own to set itself apart. The wave of trendsetters and trendseekers have transformed the neighborhood—love it or hate it—into a haven for dive bars and casual dining as well as eclectic live music and art galleries.

You’ll hear plenty of people refer to Echo Park as being on the Eastside—and just as many Angelenos who insist it most definitely isn’t. But no matter which side of that you fall on, we can all generally agree that Echo Park includes both the hilly residential areas and bustling flats outside of Dodger Stadium, bounded by the 5, 110 and 101 freeways, as well as Glendale Boulevard to the west, with some extra blocks extending to the other side of Alvarado Street.  Echo Park neighbors Silver Lake to the northwest, while to the northeast its Elysian Park extension butts up against Frogtown. The neighborhood more or less stops at the freeways, where, to the south, it neighbors Historic Filipinotown, Downtown L.A. and Chinatown. Most of the neighborhood’s activity is centered around Sunset Boulevard—where you’ll also find its most frequently-running bus lines.

We think you'll find plenty to love in Echo Park, whether you’re spending an afternoon at Echo Park Lake or a summer evening at Dodger Stadium.

The 11 best things to do in Echo Park The neighborhood’s namesake and centerpiece, this former reservoir lives on as a family-friendly destination worthy of its bold backdrop: the Downtown skyline amid the lotus flower blooms, fountains and the Lady of the Lake statue. You can push your way through the lake in a pedal or swan boat ($11–$25 per hour) or stroll around the path that hugs its borders. Make sure to stop at the revived boathouse and its breakfast pit stop Beacon. 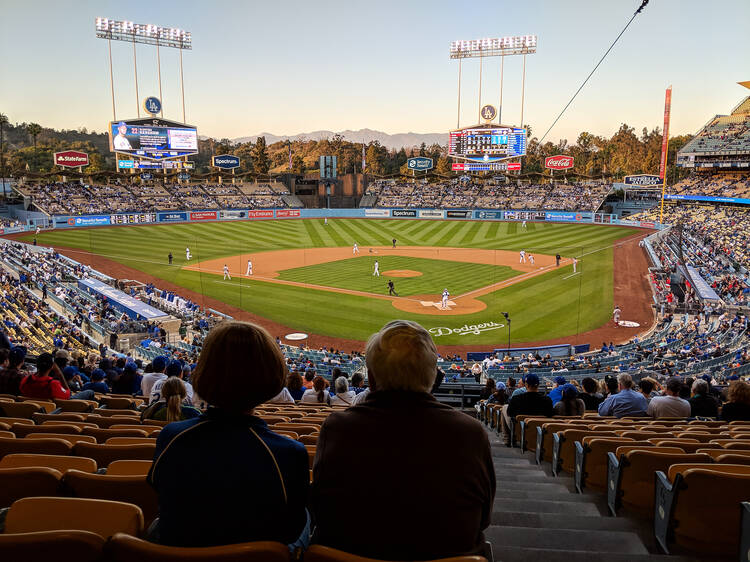 2. Cheer on the Boys in Blue at Dodger Stadium

Dodger Stadium (otherwise known as Chavez Ravine) has been home to the Dodgers since 1962, making it the third-oldest ballpark in Major League Baseball. Its charms—enhanced with recent renovations—are best seen from the inside, with a Dodger Dog in hand; the zigzag outfield shades and hexagon scoreboards are the perfect foreground for a sunset against the San Gabriel Mountains. And don’t worry if you’re visiting during the off season: The stadium still offers daily tours for $20. 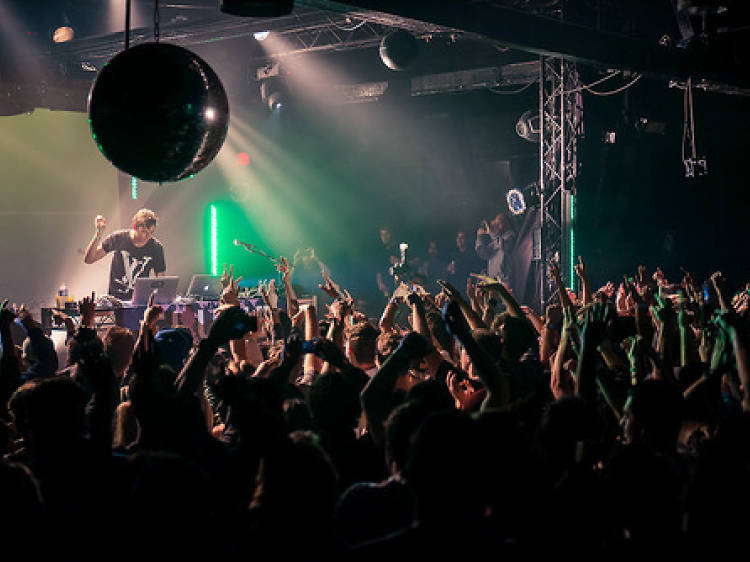 3. See a show at the Echo or Echoplex

Music-lovers flock to this often-jammed duo of clubs for all flavors of indie, dub reggae and electronica. The temperature can rise to uncomfortable levels when it’s crowded, although the back patio offers sweet relief. The big, low-slung Echoplex sits underneath the Echo, where you’ll find recurring dance parties as well as touring artists who draw bigger crowds. 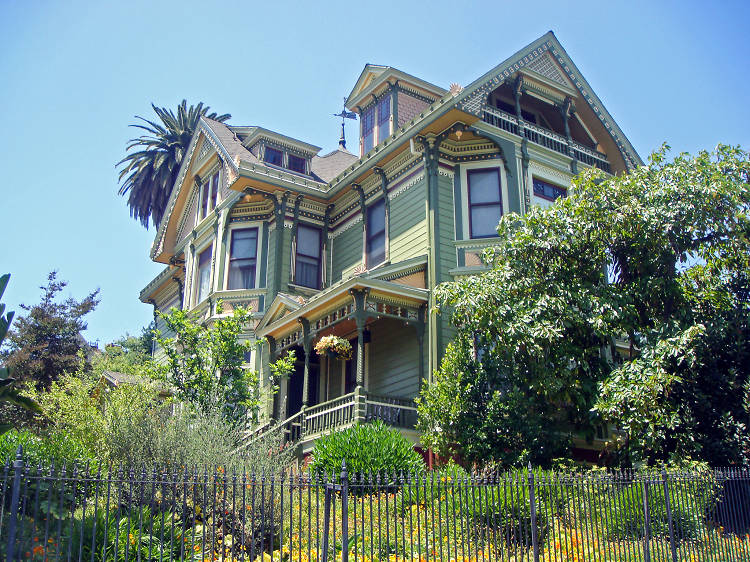 4. Stroll past Victorian mansions along Carroll Avenue in Angelino Heights

The dozen or so towering Victorian homes that line Carroll Avenue collectively form one of the most picturesque spots in the city. The wooden turrets and shaded portraits feel frozen in time, calling back to a post-Spanish, pre-Hollywood way of life that feels like a secret part of L.A. history. That is, until you realize it’s the backdrop of some of the silver screen’s most iconic franchises, including Chinatown, The Fast and the Furious films and Michael Jackson’s Thriller. 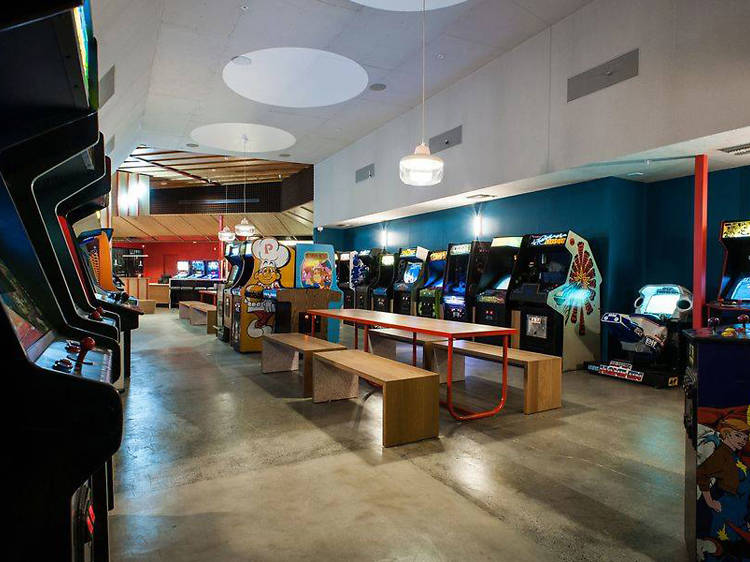 5. Grab a bite and play arcade games at Button Mash

Whatever you want to call it—restaurant, bar, arcade—Button Mash has created a category all its own in L.A. Vietnamese spring rolls, a decadent double cheeseburger and a selection of rice dishes, noodles, sandwiches and larger plates bring bright, spicy and herbaceous notes to this neighborhood hang. The drink menu includes a unique list of beer and wine, which you can peruse before you hit the 50-ish arcade machines from the ’70s to ’90s. 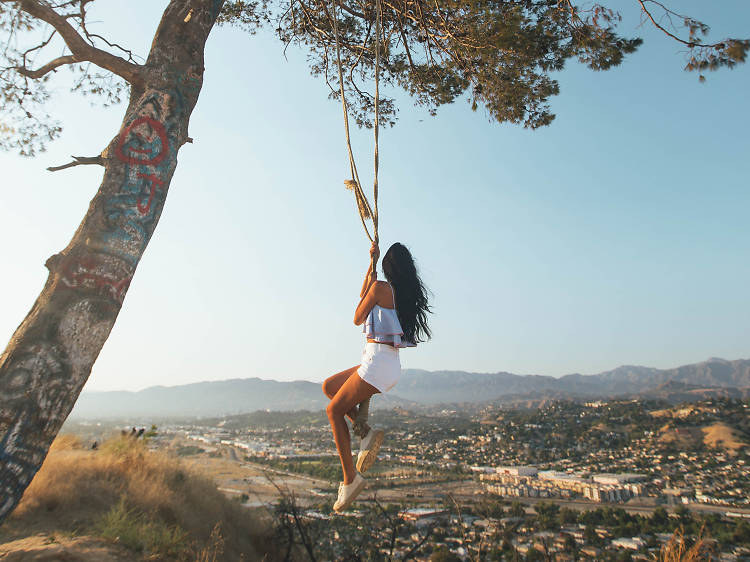 6. Search for the rope swing in Elysian Park

L.A.’s oldest park, founded in 1886, is big and beautiful but tends to get a bad rap. Admittedly, some things here have fallen by the wayside, but among the palm tree groves and hilly hikes, you’ll find great views of the Valley, Downtown, the Hollywood Hills and Dodger Stadium. On the northeast edge of the park, just off Angels Point Road, you’ll find a rope swing tied to a tree overlooking Northeast L.A. 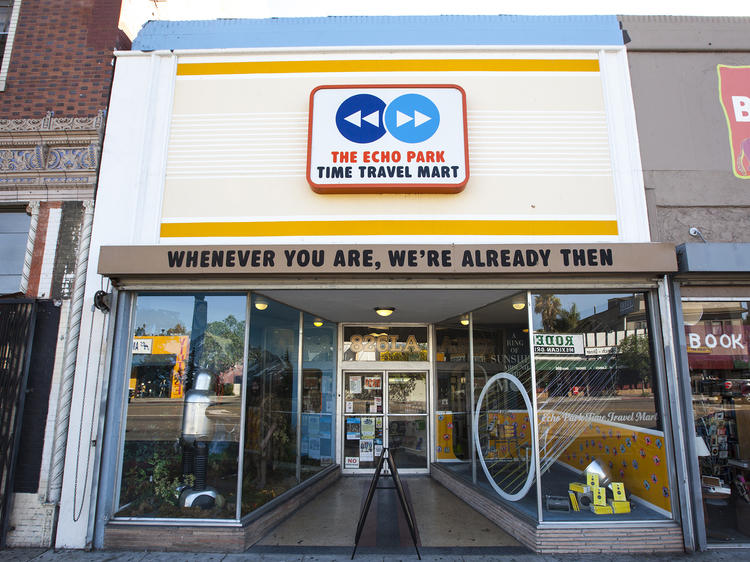 At first glance, the inside of this storefront resembles any other market in the area—but look closer and you’ll find a collection of funny time travel curiosities that one needs in order to visit the past and future, from Barbarian Repellent to Primordial Soup In a Can and a whole bunch of books. What’s going on? The market is a ruse: Everything in it is indeed for sale, but the store is actually a front for 826LA, a non-profit organization which tutors kids ages 6 to 18 (you’ll find some of the kids’ written pieces in the shop). 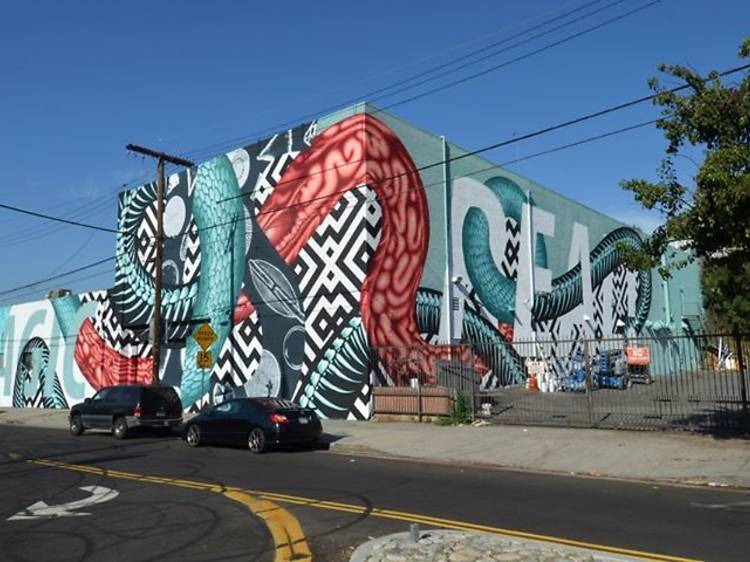 8. Soak in the local music scene at Bedrock LA 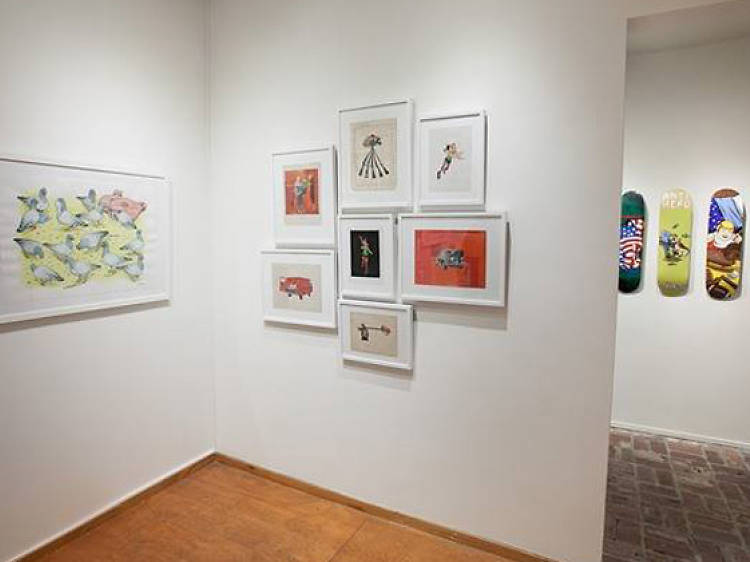 9. See what Shepard Fairey is up to at Subliminal Projects

Founded and curated by Shepard Fairey, creator of the OBEY street art series and Barack Obama’s iconic “Hope” campaign poster, Subliminal hosts exhibitions by established and emerging artists at its Echo Park base—think everyone from Apex and Andrew Holder to Tim Armstrong and Mark Mothersbaugh, as well as work by Fairey himself. 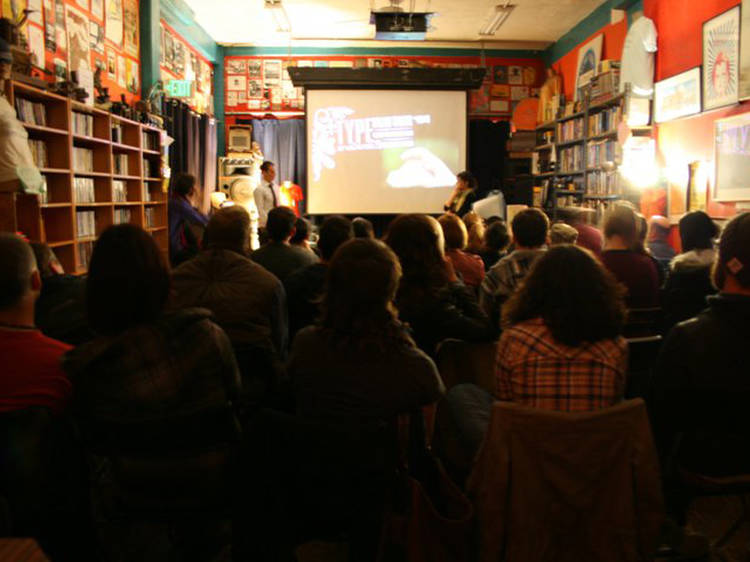 Aimed at curious locals and aspiring filmmakers, this community media arts organization holds a film school, a rental shop and a 50-seat microcinema that screens DIY and outsider films. 11. Scope out video-game–inspired artwork at iam8bit

The best of Echo Park 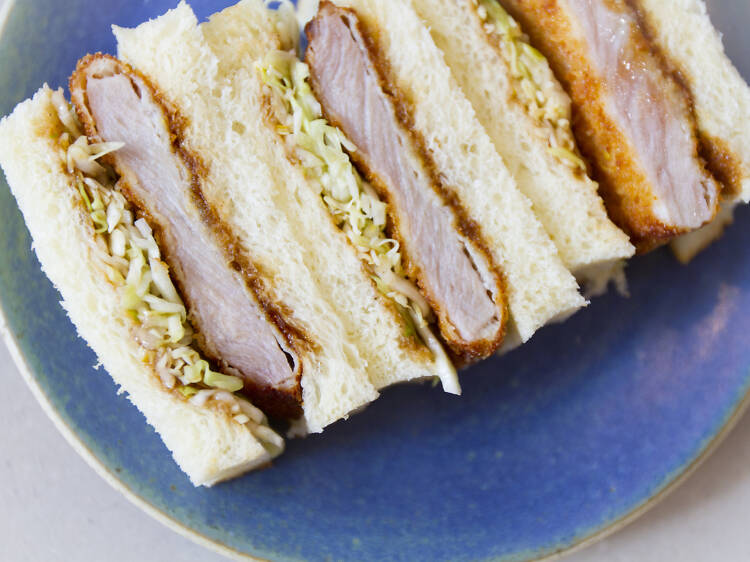 The best restaurants in Echo Park 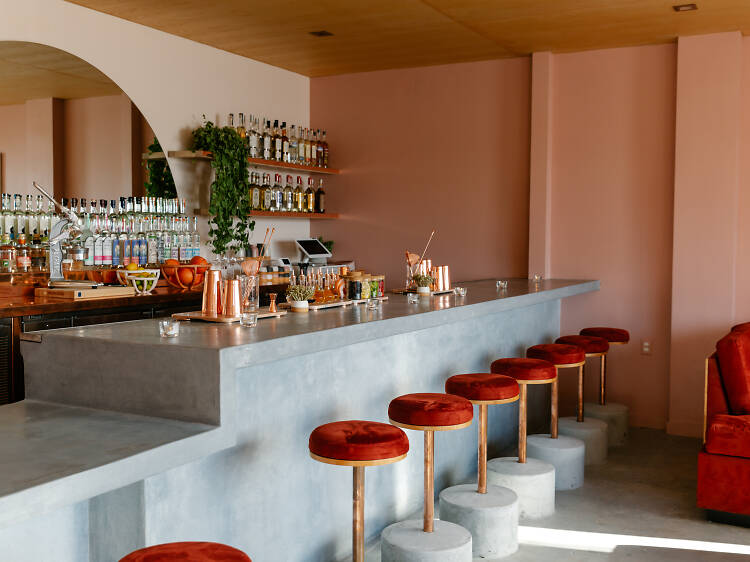 The best bars in Echo Park 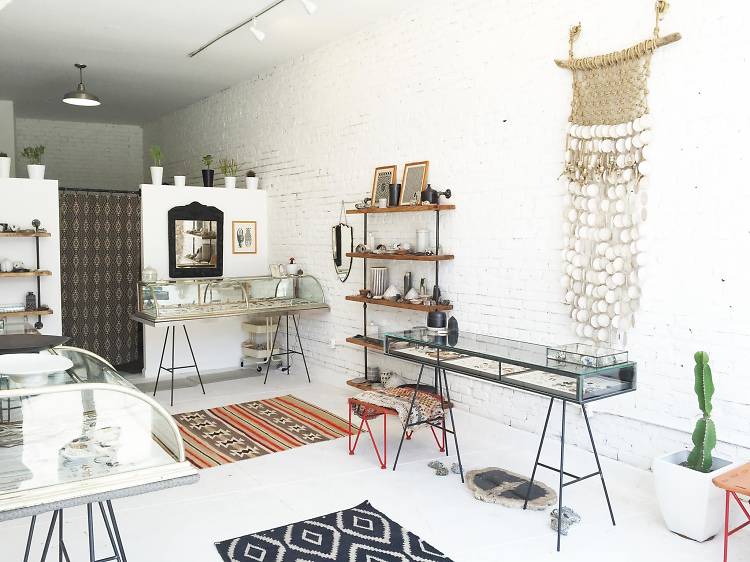 The best shops in Echo Park 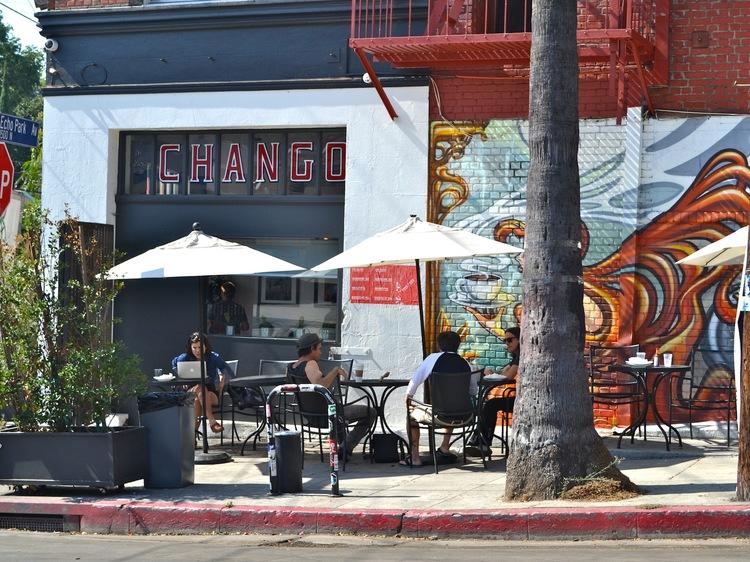 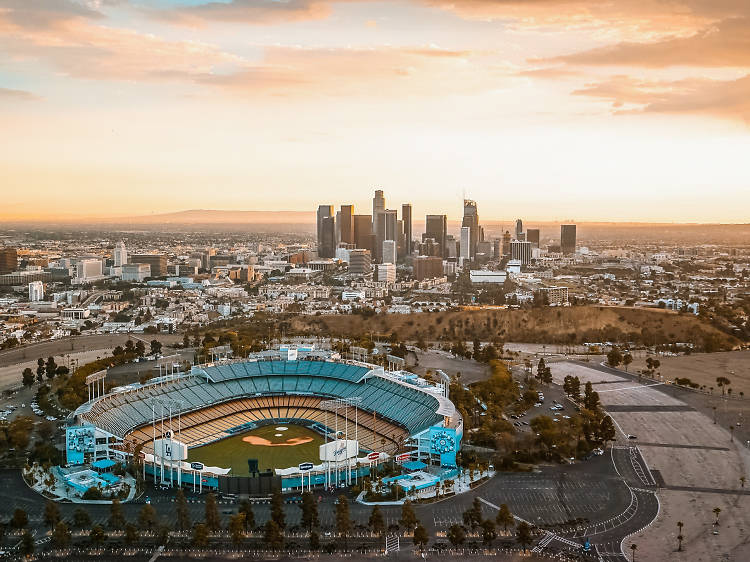 Where to dine and drink near Dodger Stadium