In a normal year (and yes, this is far from a normal year!), some 70,000 new people make Melbourne their home. That's in addition to the 2.7 million who visit our gorgeous city. To all of you, we say: Welcome! We hope you love it here. But the city has some things you'll need to learn quicksmart to fit in.

1. Where you live will define you forevermore. Are you a northsider or a southsider? Do you love quinoa and tofu Buddha bowls or find them pretentious? The beach: too hot, too sandy, too salty, too crowded, or blissful escape from the summer heat? You're going to have to pick a side, and it will define the rest of your life in Melbourne. Sure, it's not illegal to move across the river, but we've never heard of anyone actually doing it.

2. You're going to need a footy team. And no, we're not talking rugby or *shudder* soccer. AFL is big business in Melbourne, and opting out isn't really an option. You can pick a team for any reason – you live in the suburb that nominally calls it home, you like the uniforms, you think the captain looks cute in those shorty shorts – but once you have one, no take backsies (the exception is if you have been assigned a family team at birth – in that case you are allowed to change teams ONCE). Don't be like Bill Shorten.

3. It's pronounced 'Pran'. Yes, we know, it looks like Prah-RAHN, but trust us, it's Pran. And while we're at it, it's Bo Morris, no matter how French the name Beaumaris looks.

4. You're not going to find 'Jeff's Shed' on a map. In 1996, Jeff Kennett opened the Melbourne Convention and Exhibition Centre, and Melbourne has honoured him since by both name-checking him and belittling his major infrastructure accomplishment in the same breath. Don't get it confused with the Royal Exhibition Building, which is infinitely more beautiful and not located opposite Jeff's Pokie Palace (just kidding, we don't call Crown Casino that, though we also have Kennett to thank for it).

5. Sunday night is not time to go to a restaurant. Many Melbourne restaurants take Sunday night off, and those that are open are often not open late. Don't tell our Sydney friends, but Melbourne's reputation as a late-night party city comes apart a bit on Sundays.

6. You can't buy a tram ticket on the tram. Yes, you should be able to. Yes, you used to be able to. No, you can't even buy one at a tram stop. Go to 7-Eleven, a supermarket or a train station before you board.

7. But at least the tram is free in the city. If you're not going beyond the city centre, you won't need a Myki to ride the tram. It's totally free, just hop on and hop off as you wish (at a stop, please). You'll know if you're in the free tram zone because the stops say, well, 'Free Tram Zone'.

8. The NGV is free – and not scary! The most visited art gallery in Australia looks a bit imposing: that giant bluestone building, security guards in black suits and ties. But the National Gallery of Victoria is actually a very welcoming place, once you get past the water wall outside. Although temporary exhibitions are ticketed, most of the gallery is completely free. You can even sit under the gorgeous stained-glass ceiling or in the garden behind the building and read a book for as long as you want.

9. If you have business on Russell Street, don't take Collins to get there. That hill is killer. Take Bourke or Flinders and walk down Russell to avoid the infamous Collins hill.

10. Don't you dare go to Starbucks. There aren't many of them anyway, and a real Melbourne café is always going to be a better bet. You can get excellent coffee (a flat white, by the way, is a latte without the foam; a long or short black is a black coffee) as well as, usually, sandwiches like chicken and avocado and treats like caramel slices and brownies.

11. The airport bus is not so bad. The bad news: There's no train to the airport (yes, we know). The good news: There is a bus that departs every 15 minutes and will get you there in about half an hour.

12. There are holes everywhere. Melbourne is constructing a hugely ambitious second train tunnel loop through the city. Thus far that seems to mean digging gigantic holes all over the city. You get used to it.

13. You really, really do need to take a moment to... hold on. No matter how many situps you do, you do not have the core strength to keep your balance when a tram lurches to a stop, dinging its bell indignantly. Hold. On. To. The. Straps.

14. You are not going to the Queen Victoria Market on a Wednesday. The Queen Vic Market is one of our favourite spots in Melbourne, filled with stalls selling everything from fresh veggies to housemade sausages to souvenirs and hand-knitted jumpers. But it's closed on Mondays and Wednesdays, and it closes at 3 or 4pm on other days.

15. You need to open the train doors yourself. The train has come to a halt at your stop, and you're ready to disembark. But nothing's happening. Don't worry, the door isn't broken (probably) – you need to either push the button or slide the doors open manually.

16. Tram tracks are the exact width of a bicycle wheel. Do not test this, you will get stuck and crash your bike. Trust us. Really.

17. ACMI is pronounced like the cartoon company. It's pronounced "Ack-me", don't spell out the letters.

18. Docklands is further from the CBD than you think. Although it bills itself as an extension of the CBD, Docklands is a schlep from the centre of Melbourne. It'll take a good half an hour to walk from Bourke Street Mall to Docklands.

20. Don't walk down Swanston Street if you can avoid it. Swanston Street is Melbourne's main tourist thoroughfare. That means slow-moving crowds. Elizabeth Street isn't a lot better, but it is marginally faster.

21. Fitzroy Street is in St Kilda. Brunswick Street is in Fitzroy. Don't ask us why, it's confusing for literally everyone. (Apparently there's a theory that the suburb-named roads go from the city to that suburb... but we still have lots of questions).

22. You really do need to pack an umbrella. And a cardigan. The temperature in Melbourne can fluctuate wildly, dropping ten or 15 degrees within the space of a few minutes. That's a cool change, when southern air sweeps through the city and ruins everyone's beach day. And although Sydney gets more rainfall overall than Melbourne, Melbourne showers are unpredictable. Pack accordingly.

Once you've learnt the ropes 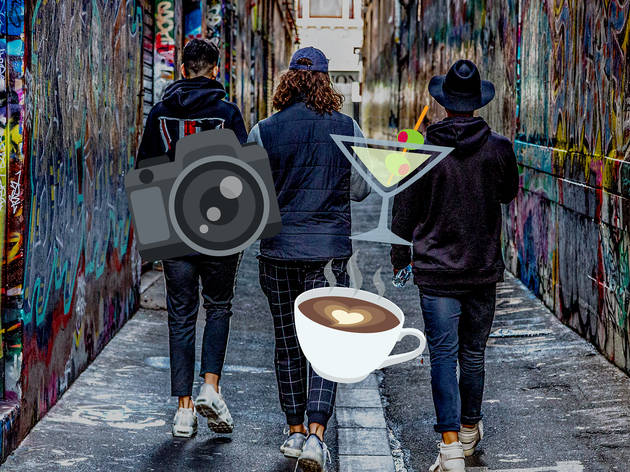 Whatever your situation, we think you must have done these 37 things to qualify as a true Melburnian...