Sydney, we stand before you empty-lunged and sweaty-browed. We've hit up Sydney's karaoke dens to discern for you the best spots around the city to bust a lung and break hearts on the private dancefloor. The criteria? The room, the sound system, the song list and that special something – we'll call it k-factor.

But the fun doesn't stop there: keep on rolling through the evening at these late night venues without a lockout, then find hearty hangover cures at the best places to sober up in Sydney.

RECOMMENDED: All the best things to do in Sydney this weekend. 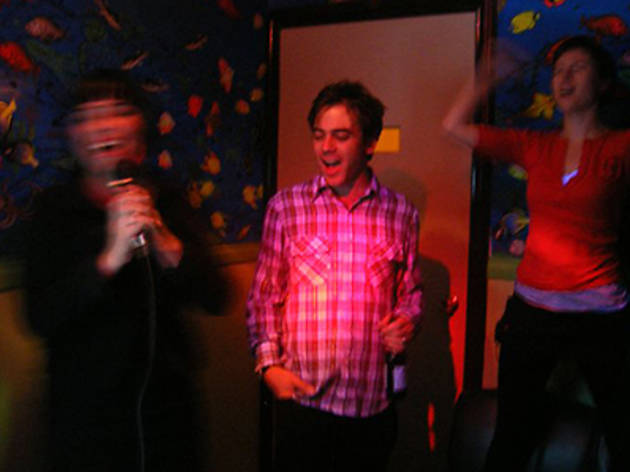 The classic Sydney karaoke club may not boast the most amazing song selection, but it does have fluoro hieroglyphs painted  on the walls. Do your sweet singing thing surrounded by pink sphinxes and a lurid green Horus. Out the front, they serve cheap Korean beers and prawn crisps.

The system:
This is an old-fashioned, books-only system (none of that touchscreen business here), complete with a dodgy old remote that you basically have to sit on to make work.

The songs:
It’s fine if you want to go on a K-pop or Kate Bush rampage, not so fine if you’re after Tina Turner, Patti Smith or Johnny Cash. Remain open to singing an entire set of Belinda Carlisle.

K-factor:
This was once one of Sydney’s most violent karaoke joints. They still have bouncers out the front with metal detectors but the most trouble you’re likely to get into now is getting caught on the tables. Rooms from six people ($30/hour) to 15 people ($80/hour). 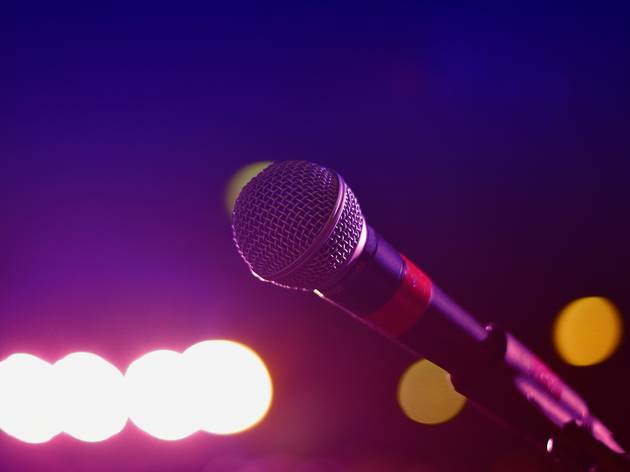 If you’re all about the glitzy Sydney singing experience, the dormitory of 11 Spartan rooms above George Street might not be your style. The booth seating is pretty bare, the mics are more school assembly than Lizzo concert, and you’re required to operate a giant 18th century calculator to select songs. But we’re happy to abandon our tech obsession if it means we get those little free dishes of soy crisps and popcorn and tambourines upon request.

The system:
The novelty of having to flip through an actual song book is kind of charming, even though the tracks are alphabetised by song name (artist is always best for a tipsy crowd), as is the oversized Game Boy-style remote. You can’t be shy here: the sound system is loud, the reverb is intense and the backing vocals are mostly inaudible. Your adoring crowd will hear every note. Good luck.

The songs:
There’s an overwhelming contingent of Korean songs in the thick tome, but in the (much) smaller English section we find some we know will get us top points in the room's scoring system. Mariah Carey’s ‘We Belong Together’ makes an appearance, and we reach a perfect 100 for a very cheesy rendition of ‘Beautiful Soul’.

K-factor:
The point system really ups the enthusiasm (don’t worry, it’s more generous than SingStar) as do the disco lights that flash on with each new song. You can sing the night away without going into severe debt, with rooms starting at $30 for an hour and $5 cans of Korean breer Cass Fresh filling you with confidence. 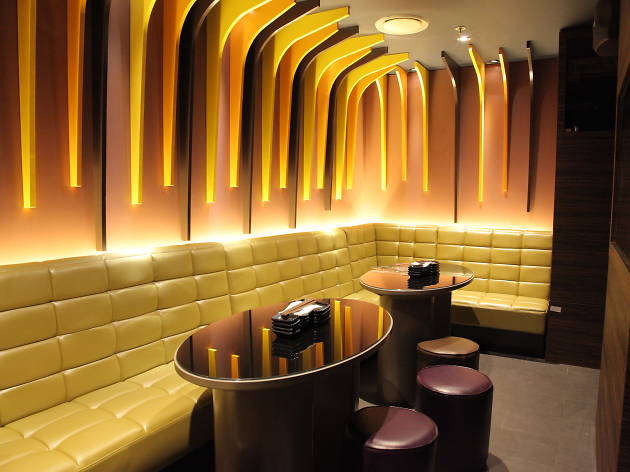 This relative newbie has thrown down the sparkly, Janet Jackson-style gauntlet.  The rooms are like little mod capsules – ours was all mirrored oval tables and plush, light olive lounge seating – and the Japanese menu (order via the touchscreen near the door) is extensive: bowl of ramen with your ‘Girls Just Wanna Have Fun’?

The system:
One of the easiest touchscreen systems in town for an English-only speaker. But with no book for browsing, the queue at the screen gets long.

The songs:
The song list is huge, but still fails our Johnny Cash test. Does no one in this town want to sing a rollicking good-times version of ‘Ring of Fire’?

K-factor:
You enter via the Sun Tower on George Street – the bouncer waits by the lifts – and there’s something fun about sneaking tipsily into an office building late at night. You can mix and match room rates with dinner packages, but a straight hour of karaoke will cost $55 four to six people per hour, to $175 for 15-20 singers. 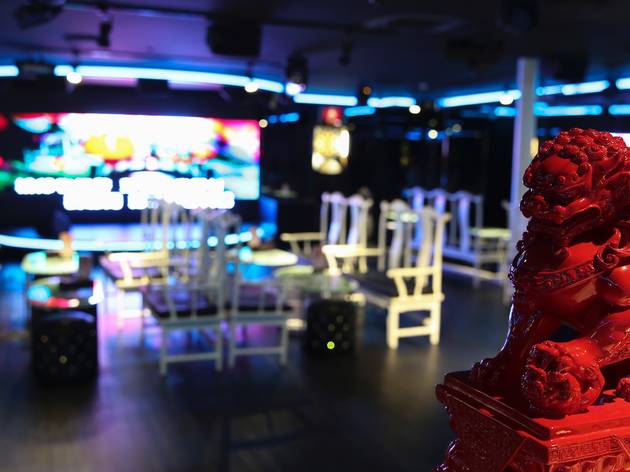 An unobtrusive doorway in the middle of Dixon Mall in Chinatown leads to an elevator, and then you walk into a Blade Runner-style idea of the Shanghai wine bar of the sci-fi future: pulsating screens, mirrors, giant ads for Hennessy and serious terracotta statues. You’ve got a choice of either private rooms or taking your chances on the big main stage, and staffers here seem to think that if they keep you fed and watered, you’ll stay all night. They’re right.

The system:
Touchscreen, and it’s the familiar system used by many of the K-rooms around town. Videos are mainly the original clips, allowing you to either sing along if you’re a timid little k-coward (koward?) or mute out the vocal.

The songs:
The selection is adequate in the department of ’80s ballads and Brittney Spears hits, but we were missing bangers from the last decade or so. Still, you can only send out good vibes in an uplifting group rendition of ‘Unwritten’ by Natasha Bedingfield or Kilye’s ‘Spinning Around’.

K-factor:
For a proper rager of a night, this rules. It’s gaudy, shiny and over the top, with statues on everything, one-way mirrors in the private rooms, unisex toilets, touchscreen tabletop games if you get bored with the singing and generous jugs of Hennesy and green tea. Rooms range from $8 per person per hour to $198 for a party room that’ll fit around 25 screeching singers. 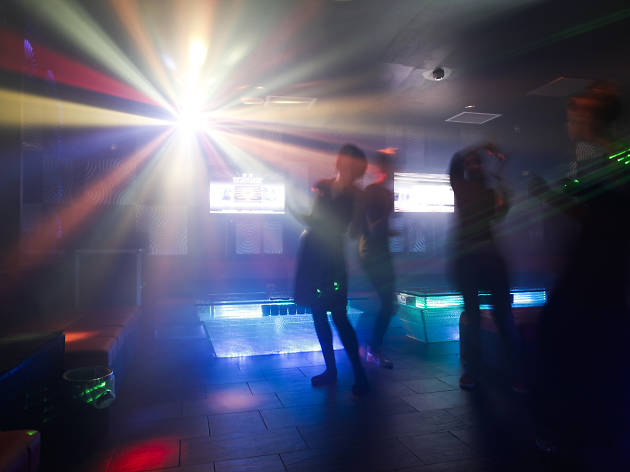 Proper Sydney karaoke enthusiasts swear by the Point. Fans will fondly describe its battered ’80s aesthetic as careworn, like a favourite coat. Others will equally accurately add that the rooms smell like a teenage boy’s poorly supervised sock. Either way, this is where the karaoke devotees are separated from the karaoke noobs. The staff are friendly and you can get snacks, sushi platters and booze, but this isn’t a place to cuddle up and dine: you’re here to work.

The system:
Not immediately intuitive but you’ll work out the touchscreen and stylus set-up for pointing to your fave tunes. On Time Out’s visit, we would have raised the roof for some more bassy oomph beside the plinkity-plonkity synths coming out of the speakers.

The songs:
Amazing. Echo Point has Sydney’s greatest and largest range  of tunes, hands down. They’re all keyboard backing tracks, which might sound like a minus but it is in fact an awesome plus, since you can adjust the pitch and tempo. Want to start randomly changing a song’s pitch because it’s Depeche Mode’s ‘People are People’  and you’re bored? Good news!

K-factor:
If you want to prove something about how this karaoke game is won, then this is the arena in which to do it. Their happy singing hour starts at $6 per person, per hour, and the rooms can accommodate up to 22 people for $158 each hour. 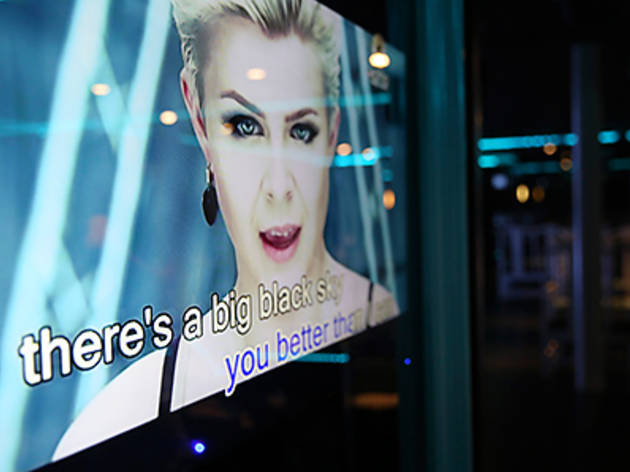 This collection of 18 rooms up a few grungy flights of stairs off Dixon Street lacks in the design stakes – in our room, the walls were decorated with a stencil of an afro’d bloke next to the words “I’m rapper”, and a large poster for Hennessy VSOP. But rooms are big and uncluttered, making for a good amount of dancing space, and the black leather lounge seats and tables are sturdy (not that we’d encourage getting on them… ahem). Word of warning: you have to pay a holding deposit to order any alcohol and the staff can be less than friendly.

The system:
Similar to most around Chinatown: search in the system for your singer using a not-too-glitchy remote.

The songs:
The selection is decent, and there are some original clips – just look at Kylie and Robbie getting all grabby in ‘Kids’ – but K1 rates a zero on our ‘Where’s the Johnny Cash-o-meter’.

K-Factor:
The sound system is killer… and you can have four microphones per room for those latter-career Spice Girls moments. Rooms range from six people ($38/hour) to 40 people ($148) – prices for Friday and Saturday nights. Happy Hour rates available. 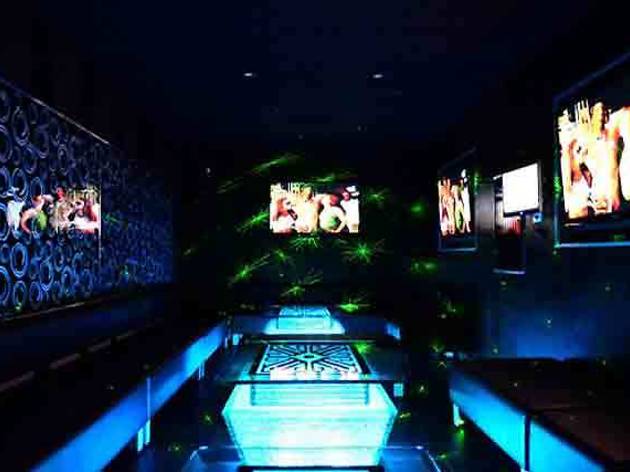 It’s Sydney’s oldest collection of rooms to sing in and still one of its best, especially after a reno in recent years (that old Karaoke World smell is gone). The 18 rooms are now all dark walls, chunky glass tables (watch your shins) and rave-y lasers. Food is still your basic chips, spring rolls and wings, though.

The system:
The remote is easy to use if you’ve laid off the sake but the mics can play up. Thankfully, the front desk is swift to the rescue with a replacement.

The songs:
The venue takes pride in promoting their mammoth selection of more than 120,000 songs in English, Japanese, Chinese, Thai, Indonesian and Korean. The list skews toward Top 40.

K-Factor:
This is where the celebs come to let their hair down (one Time Out-er recalls singing ‘Livin’ on a Prayer’ here at 3am with a WWE wrestler). Rates start at $66 for a room that’ll fit five, to private suites with their own loo for $186, so your group of 35 stars won’t waste whizzing time. 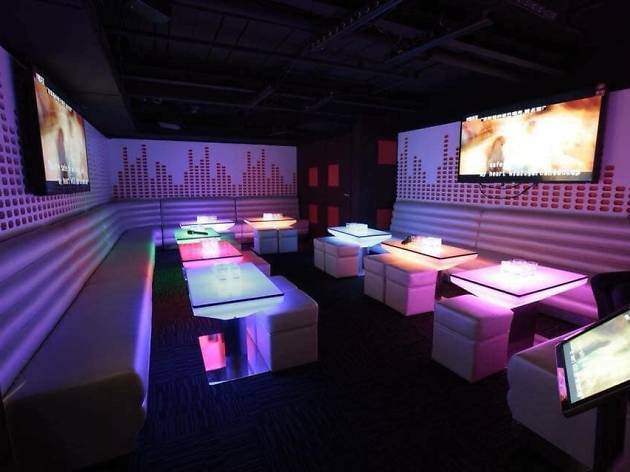 Even for a subterranean Sydney karaoke joint, K Square is rabbit warren-y. You burrow down off George Street through dark tiled walls all sprayed with graffiti  to your room, which, if you’re a big group, will be a blissfully air-conditioned space that fits 40. We love the playing card-style kings and jacks on the wallpaper almost as much as we love our private bathroom (and it’s clean!). Order a snack – the menu is mostly Thai noodles and fried favourites – or a three-litre tower of Asahi.

The system:
Plus one: most songs feature the original music videos (no longing gazes across Manila Bay here). Plus two: there’s a book as well as a searchable digital system. Mild minus: they play the original vocal track with each song – good if you’re a blender, bad if you were planning your big all-ears-on-me Dreamgirls moment for later in the night.

The songs:
A big list, and current – so you can really show off your music eclecticism.

K-factor:
If you’re keen to pop in for a lunch hour training session with a few pals, sing your heart out midweek for $7 per person, or book a room for up to five people for $58. Then show off your moves on the weekend to the full contingent of 25-40 peeps ($198 per hour). 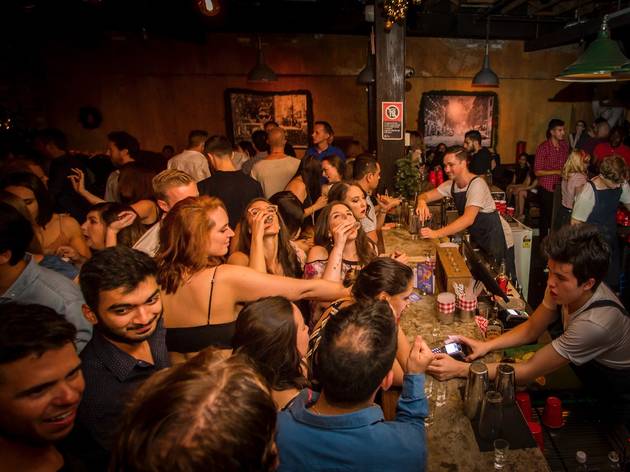 Get more bang for your buck with cut-price drinks and no cover charges in clubs, bars and party basements that are putting the free in footloose and fancy free. So you don’t have to scour their event pages, we’ve found the best evenings to head to these eight party spots so you can get in without flashing any cash. Because in da clerb, we all fam.