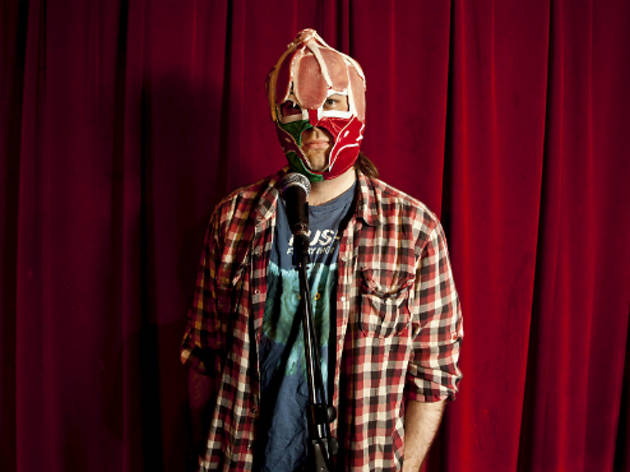 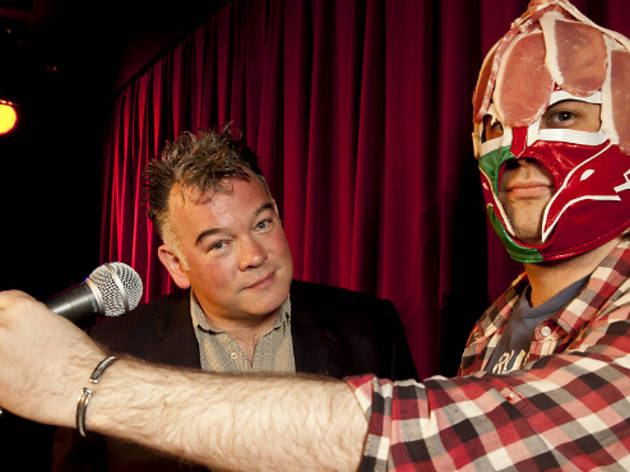 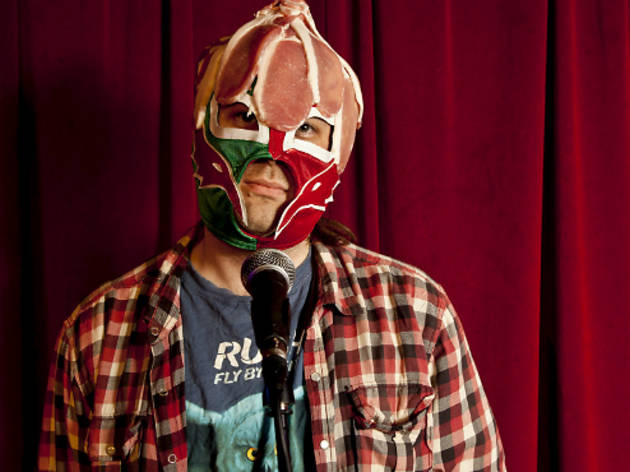 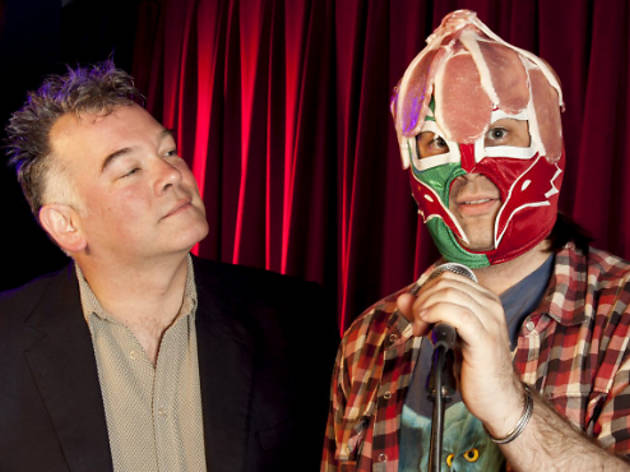 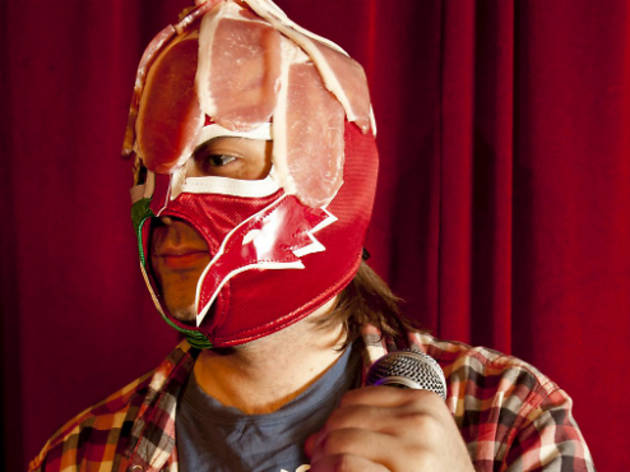 As influential comics go, none are less conspicuous, and more mysterious, than cult Canadian enigma Baconface. Over his 30-year career, the obscure stand-up – who, on stage, dons a Mexican wrestling mask wrapped in bacon – has, curiously, been largely unknown to British audiences, including myself. But Stewart Lee – who cites the comic as one of his biggest influences – has made Baconface a ‘programme associate’ on the new series of ‘Stewart Lee’s Comedy Vehicle’.

‘At home, we would call it a “writer”,’ says the gruff-voiced Canadian, down the phone from his home in Chilliwack, British Columbia. He's hoping to capitalise on the TV credit by performing some shows. ‘But I would hope that my mind set is so specific to rural Canada that it makes no sense whatsoever in your country. And if it does, I’ve failed on some level.’

Your website states that you’re ‘the inventor of Canadian stand-up’. That’s quite a claim. Can you back it up?
‘Well, when I started there wasn’t a comedy circuit as such. It was really just old guys doing gags, normally pitched towards whatever ancestral background the audience was: Irish or Scotch or whatever. And then, at the other end, there were guys from the festival circuit: hippy-type novelty acts. I was the first person really to try and talk.’

What kind of acts would you be on the bill with at that time?
‘The bills I’d be on in the early ’80s would have novelty guys – like Gassy Jack, who was a Le Pétomane: a farting act. He would fart significant tunes from Canadian history, like the national anthem, and the hits of The Guess Who.

‘Another great act in those days was Grey Al, who was a Native American from the Haida tribe. Grey Al would do little homilies: a parody of native Canadian wisdom. Everyone thought: That’s fantastic, there’s a Native American comic! But he turned out to be a white guy who spent a lot of time topping up his tan, so the whole thing was built on a degree of falsehood. But these were all novelty acts basically, Ben, and the first person to try and talk was me.’

How do you know Stewart Lee, and how did the 'programme associate' role come about?
‘Oh, I didn’t know him. He maintains that when he was 18 he saw me at a comedy club in Kelowna and it was something of a light-bulb moment for him. I was not aware of him, but I read some of the transcripts of his work in his book, and – I don’t want to criticise the guy – I think he’s done the right thing in finding some way late in life of recompensing me for what he’s, well, stolen from me. I must stress that I’m not a writer on the programme; I’ll walk around coming up with ideas and if anything good comes up Stewart Lee will write it down, so any actual writing is being done by him.’

How do you think you can help his stand-up?
‘Well, his is a very blocked piece of work which is involved in a pretentious discussion of it’s own structure. It's very superficial, and it's a triumph, if you can call it that, of artistry over content. It’s absolutely free of heart or soul. What I do is quite the opposite of that, I talk from the pit of my gut about my experiences of the landscape, of wildlife, weather and topography, and all these essential aspects of being. I think he wants the flavour of that to work as an antidote to the dead cul-de-sac that he’s backed himself into.’

You said in a previous interview that Stewart Lee is ‘in danger of disappearing entirely up his own ass’. Why are you still willing to work with him?
‘It’s the woodsman in me. When I’m not in Chilliwack, I’m in a cabin in the Rockies. One day I walked through the woods and I heard a crying sound. I pushed through the foliage and there I found a bear. Not an adult bear, not a cub, somewhere in between. It had its paw trapped in a trap.

‘Now, I respect the bear, but I’m no friend of them. Nonetheless, when you see a creature in pain, who’s suffering, you’d have to have a heart of stone to just leave it there bleeding. So I worked away on that joint with whatever tools were to hand and freed it. Similarly, this cry has come across the sea, from this wounded creature, no longer in control of its destiny, confused, finding itself in pain and trapped, trapped in a pretentious net of its own making as surely as that bear was trapped in that trap the poacher had put out. And you can’t walk away. You can’t walk away from a creature in pain.’

That’s quite the metaphor…
‘Well, yeah, but when you live close to the ground in the woods, what is metaphor and what is reality become very blurred, Ben, very blurred. I’m on a journey – literally, I’m coming on a journey to England. But I’m also on another kind of journey, which is not a real journey. But I am on a real journey as well.’

In interviews, Lee talks about the on stage Stewart Lee ‘character’. Are you the same? Do you have an on stage persona?
‘No. There’s no interface between me and the world, what you see is what you get. I don’t wear a mask to be in a character, I wear it to hide a disfiguring injury I sustained as a younger man. The irony is, my actual face looks very similar to bacon anyway. So I’m not hiding anything. In fact, I’m using a mask, if anything, to amplify the essential notion of what I am.’

Are you ever worried the bacon-wrapped mask will put punters off?
‘I don’t know if that will be a problem in England, because many of your comedians are hideous: repellent-faced, gap-toothed products of a society in which dental care is not a priority. A guy with a bacon-covered face is not a hugely significant image in the lexicon of disfigurement of the British stand-up circuit.’

True. And other ‘face’-named comedians have become very successful: silent act The Boy with Tape on His Face, for example…
‘Yeah, well, I wonder where he got that idea from. There’s a lot of movement of comics now, there’s a whole generation of Canadian acts pitching up in the UK, and Australia. People talk, they have conversations, and it’s interesting that a guy with some tape on his face is doing well now, and I’ve spent the best part of three decades with bacon on my face… I speak, though. So if it’s stuff on a guy’s face you like, you can come and see me – and I’ll speak, not just a guy falling over, so it’s better.’

What do you have planned for your London shows?
‘Well, I’ll do about 10 minutes at the top talking about the hunting procedures in the Canadian woodlands where I live. And then I think, because it’s a getting-to-know-you kind of a show, the bulk it will concern largely unintentional and accidental sexual contact that I’ve had with wildlife. None of it intentional, but all of it seeming to tell a bigger story, in context. I’ve got a 30-year back-log of material, and at the rate us North American stand-ups work, that’s nearly two or three hours of prime bacon to pluck from.’

Do you care what British audiences think of your stand-up?
‘I hope they appreciate that it’s not for them. But if they approach the shows in the same way they might an aboriginal dance or a performance by some South Sea Island group – ie that they don’t expect to understand but might appreciate the aesthetics of this mysterious foreign event – it’s possible they’ll come away from my shows mildly distracted.’

So you’re not going to be adapting your material for UK crowds?
‘No, no. I’m going to go further into the specifics of Canadian culture than I ever have done before. I’ll be referencing things that people of my age, who grew up on my street in the town that I grew up in, would not know what I’m talking about. That’s the idea.’