Normal golf is all about pacing, focus and stamina. Crazy golf has none of those things. What it does have is beer and fibre-glass obstacles. You literally can't get crazier than that. It's a proper laugh.

With themes ranging from the exotic (tropical jungles) to the mythical (dragons), we've caddied all the finest spots together for your perusal – ace rooftops included. 'Cos there ain't no par-tee like a crazy golf par-tee...

Check them out below and then read up on more great London events.

RECOMMENDED: The best things to do in London this weekend 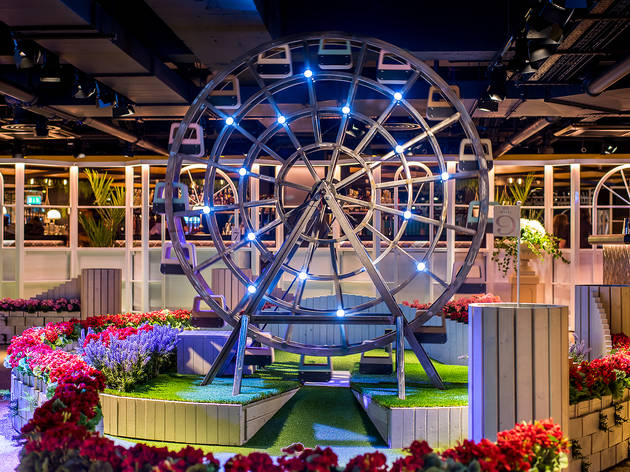 Swingers West End is the second of it’s kind, and like it’s sibling in the city, it’s got a nine-hole course to knock your balls into. For the Helter Skelter course, there’s a lot of loops that will have you going round in circles. On the Big Wheel course, things are just as tricky, with miniature mounds that’ll make you feel like a real hill-seeker. An ode to the English Riviera, Swingers West End has beach huts and bandstands – plus lush palms for added ‘Miami Vice’ vibes. Think of your best childhood seaside holiday, then add booze.

Where is it? 15 John Prince’s Street, right by Oxford Street tube 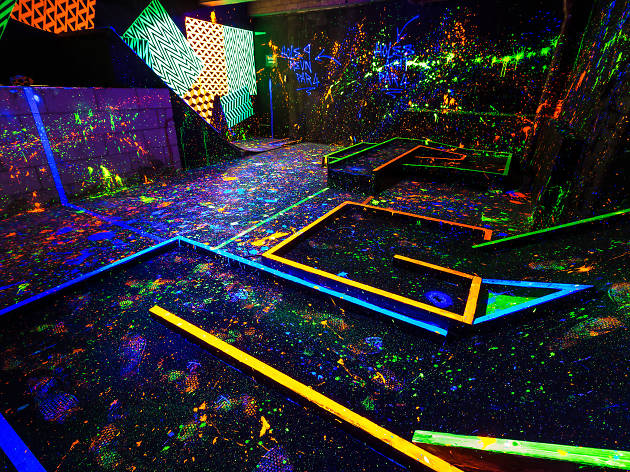 There's a real sense of fun to this deliberately rough-around-the-edges course. Party tunes blare from speakers, graffiti jazzes up the walls and it's made from 'twisted junk, car booty and charity shop shizzle'. There are four themes – Bruce, Pablo, Gary and Bozo – inspired by blockbuster movies, Carnival, the jungle and a scrapyard challenge.

Where is it? Dray Walk, Old Truman Brewery

How much for a round? From £10.50 per person. Fridays and Saturdays strictly 18+ 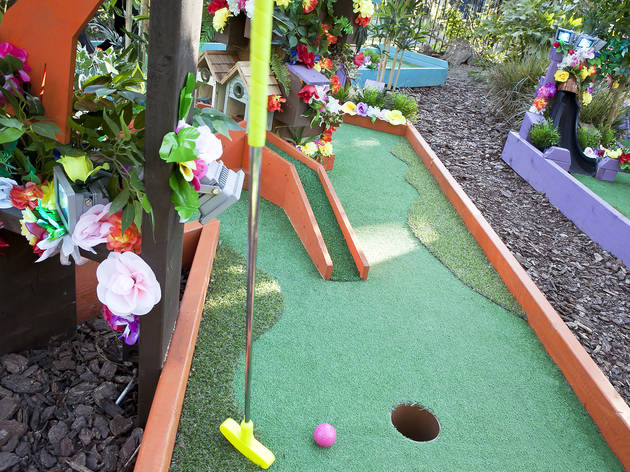 Plonk is taking over the world. Seriously, this quirky, tiki-themed course first popped up in Efes, a Turkish pool-hall-come-late-night-bar, in April 2015. Now, there are several Plonks knocking about: there’s one in Hackney, Brixton, Islington, Battersea, Brighton, London Zoo and even Berlin! This UV masterpiece features a bundle of bright decor, from glowing volcanoes with neon orange magma, spinning disco lights, and a euro-house soundtrack that is possibly best described as: ‘Nu Rave Polynesian Luau.’ There are some nice holes that fire your ball onto tricksy little mechanisms, a loop the loop, and a lot of impossibly steep ramps. All in all: it’s a great place for a plonking party.

Where is it? The People's Park Tavern, 360 Victoria Park Road

How much for a round? From £7 per person for 1 round 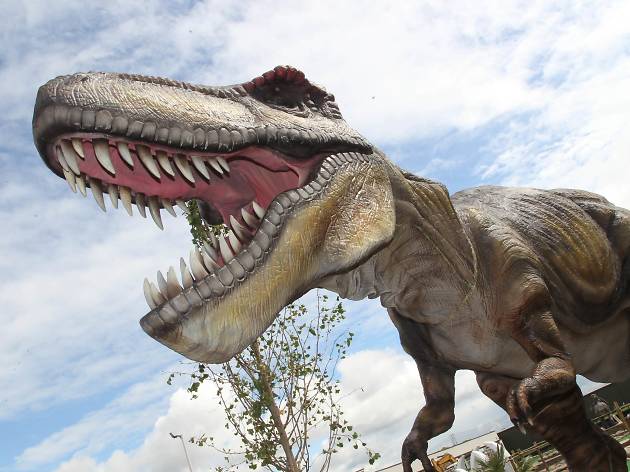 If Michael Crichton had written about DNA cloning’s miraculous potential to create putting hazards, this is what 'Jurassic Park' would’ve been like. Right down to the theme tune they blare from the speakers every 20 minutes or so. The holes mightn’t be the most challenging, but the course’s fringing is awesome: velociraptors loom from lakes of blood and giant diplodocus stand stark against the skyline as animatronic dinos bark at golfers.

Where is it? World of Golf, New Malden

How much for a round? From £10 for adults. Second go is half-price 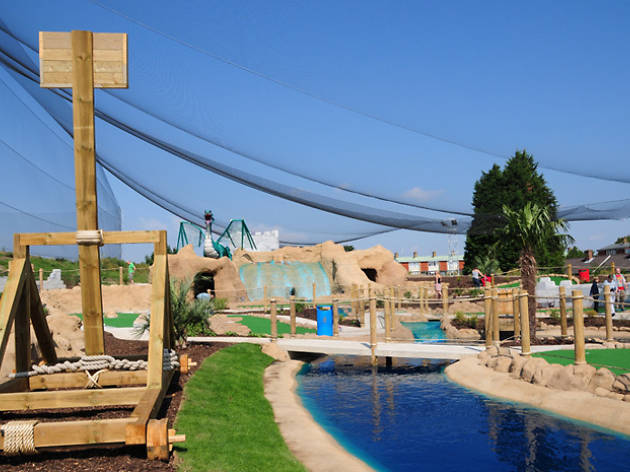 Expect high-pitched company at this 18-hole Croydon course – it’s so child-friendly that club hire takes place at a gift shop full of plastic swords, axes and daggers-slash-bubble wands. Pathways are stamped with luminous green dragon footprints, one hole’s set in a massive castle turret, there’s a dragon’s tail jutting from the top of a replica waterfall and there’s a giant trebuchet in the midst of the course (obvs). Be warned: one hole involves you sinking a ball while a speaker pipes a deafening squeal of serpent rage into your ear. Even St George would struggle with that one.

Where is it? World of Golf Croydon, 175 Long Lane 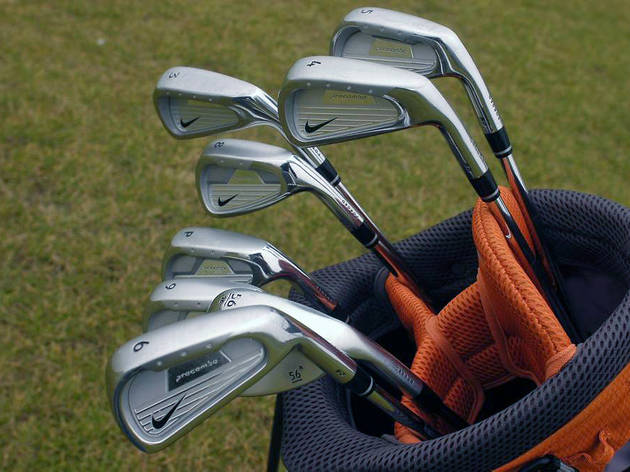 A new and improved crazy golf extravaganza, and part of Sidcup Family Golf (formerly World of Golf). Mr Mulligans Dino Golf is a prehistoric adventure course, with 36 perilous holes that are roaring fun. It's wacky, silly, and also pretty damned tricky: expect to find yourself chipping balls onto a small shelf, over rapids, and facing other challenges that are a total pain in the putt.

Where is it? Sidcup Family Golf, A20, Sidcup Bypass

How much for a round? 'Adventurers' (Adults) for £9 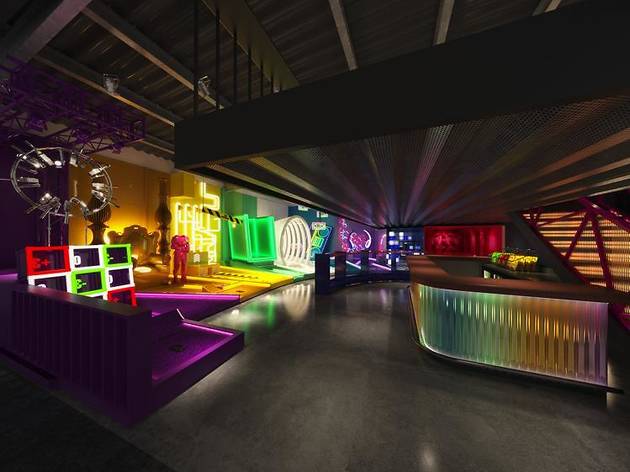 Located in Unit 30, Boxpark Wembley, Pop Golf is an attempt to let you play crazy golf inside a music video. What this means is a lot of eye-catching neon and holes dedicated to iconic videos from the likes of Drake and Kylie Minogue.

Where is it? 8 Olympic Way, Wembley Park. 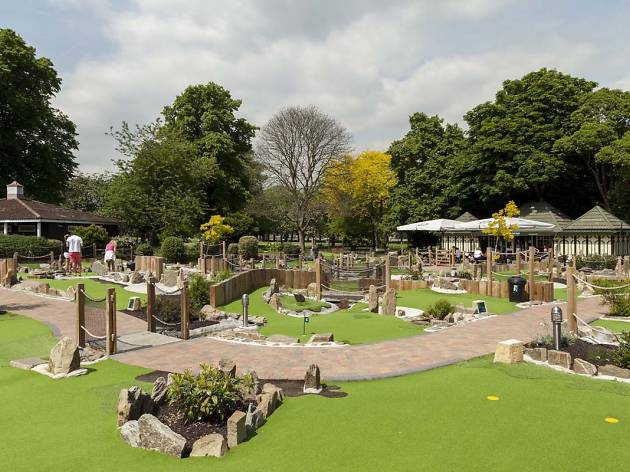 Where is it? Battersea Park, Albert Bridge Road

How much for a round? From £10 for adults 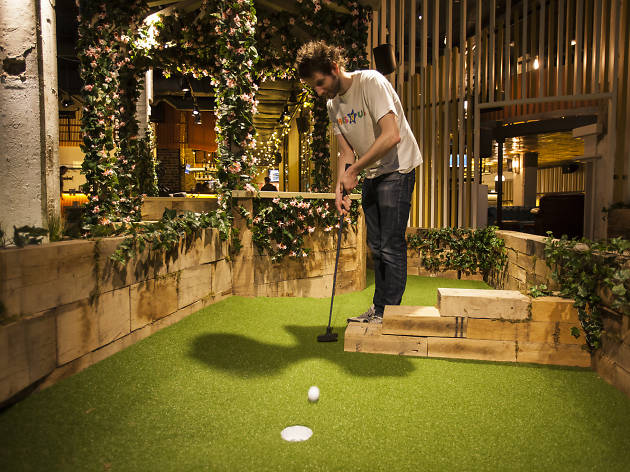 The once pop-up, putting-course-cum-bar, street-food emporium that kick-started the crazy golf trend has gone permanent. There are two nine-hole courses, food stalls from Le Bab, Patty & Bun and Pizza Pilgrims. The courses are less madcap than most of the city’s offerings, tending towards a slicker night-out experience, but nonetheless, there’s still a loop-the-loop. And an automatically rotating lighthouse. And a windmill with spinning blades. And a tree that’s filled with lights that flash when you putt into the final hole.

Where is it? 8 Brown’s Buildings (between St Mary Axe and Bury Street)

How much for a round? From £10 per person per nine-hole round 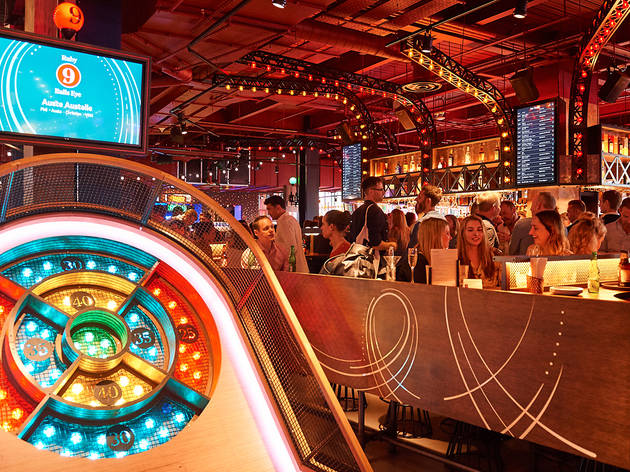 After you’ve finished your shopping at Westfield London, head downstairs for the craziest game of golf you’ve ever played. Crowned the world’s first hi-tech mini golfing concept, Puttshack uses ground-breaking tech to spice up your standard game of mini-golf. And top it all off, the island bar and dining area boasts delicious meals and an extensive list of rum cocktails to aid your celebrations or commiserations.

Where is it? Westfield London, Ariel Way

Explore the great outdoors in the city 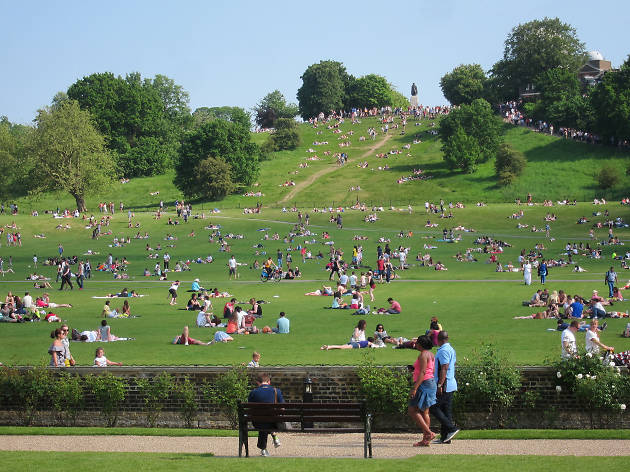 If you're gagging to explore the great outdoors, here's where to go to catch an open-air film, take a dip in a local lido or simply wander through one of London's many pretty parks.