Ah, the annual Time Out Sydney Bar Awards. Who doesn’t love a chance to toast the faces and spaces, newcomers and old favourites that make drinking in Sydney a world-class affair? With the imminent lifting of the lockout laws in Sydney’s CBD, this year’s festivities felt bigger than ever before.

Over 700 Time Out readers, hospitality heavyweights and party-loving people packed into the Powerhouse Museum on Monday evening to reward the industry’s best and brightest in 11 different categories. Host Matt Okine had everyone in stitches from the get-go, while they knocked back shots of Fireball, along with Adelaide Hills Distillery gin and four different Fever-Tree tonics, Buffalo Trace Bourbon and Fever-Tree dry ginger ale, beers from Two Suns and Mountain Goat, Willie Smith’s ciders and wines by Unico Zelo.

The snack game was incredibly strong as well, with Eat Art, Chur Burger and Vejoes food trucks parked on the premises dishing up the likes of Texan-style nachos, beef and vegetarian sliders and three-cheese quesadillas, as well as a giant grazing station piled high with cheese and charcuterie. And because an awards ceremony is nothing without a bit of live entertainment, guests were treated to some killer performances by the Imperial Hotel drag queens, Retrosweat, the Dollar Bin Darlings and Sydney Festival’s Two Crews.

So, who were the big winners?

CBD cocktail bar and soda factory PS40 took home the top gong for Bar of the Year; not only for its wholehearted commitment to creativity and experimentation, but also because it has redefined our perception of what a drink can be. It’s been a game-changer since the day it opened just over three years ago, and through constant collaboration and reinvention continues to raise the bar even higher.

Perhaps the year’s most ambitious opening, Cantina OK – a miniscule mezcaleria with standing room for just 20 punters in a repurposed car spot down a nondescript CBD laneway – was named Best New Bar, while Double Deuce Lounge, another CBD newcomer, was crowned Best Cocktail Bar for its short, sharp list of stiff cocktails that bring back the ’70s in style.

The Inner West’s burgeoning bar scene also made big waves this year. Marrickville’s first and only dedicated wine bar, Where’s Nick, earned the title of Best Wine Bar thanks to its egalitarian spirit and uncompromising hospitality. The friendly faces and capable hands behind the stick at Earl’s Juke Joint in Newtown won the trophy for Best Bar Team for a second time, proving that consistency is key when it comes to great service. And Public House Petersham earned the prize for Best Pub for delivering everything your favourite local does, but just doing it that much better.

Food in Sydney’s pubs and bars stands toe to toe with some of the city’s best restaurants, and there’s no better proof than Nicholas Hill’s riffs on traditional Anglo-Australian cooking at the revamped Old Fitzroy Hotel in Woolloomooloo, the winner of the Best Bar Food award. Clearly, tradition and history are major drawcards for Sydney drinkers because the reader-voted People’s Choice Award went to the Doss House, the whisky den housed in a 170-year-old former bootery, boarding house and opium den in the Rocks.

The Time Out Legend Award was presented to Stuart Knox, who flipped the script by opening Fix Wine Bar and Restaurant in 2006. His unassuming venue laid the groundwork for Sydney’s flourishing wine bar culture and is still going strong after all these years.

But it was two bartenders who stole the show and stood head and shoulders above the rest: Atlanta Pahulu, of Bulletin Place, who emerged as this year’s distinguished Rising Talent, and the Lobo Plantation’s general manager, Mary White, who received the coveted honour of Bartender of the Year.

The celebration would not have been possible without the hard work of the team at the Powerhouse Museum, as well as our sponsors: Asahi Premium Beverages, Two Suns, Fireball, Winterhalter, Buffalo Trace, Fever-Tree and Willie Smith's.

You can read all about this year’s nominees and winners by picking up a free copy of Time Out magazine’s summer issue, which will be handed out around the city on December 18-20. To find out where you can grab one, keep an eye on our Instagram.

Read more about the winners here... 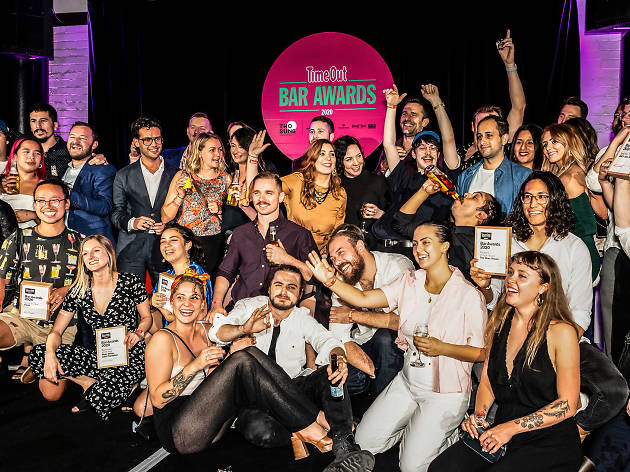 These are the champions!