The best Filipino restaurants in Sydney

From adobo to lechon, the multicultural cooking of this colourful island nation comes alive at these top spots

Filipino food is influenced by a variety of culinary cultures from around the world, taking cues from Chinese, Japanese, and Spanish cuisine. But make no mistake, the dishes that are born and bred in the Philippines have a distinct deliciousness all their own.

For example, there’s the famous adobo (meaning ‘marinade’ in Spanish), a dish of either chicken or pork, marinated in a mixture of soy sauce and vinegar. And then, of course, there’s halo halo (meaning ‘mixed together’ in Filipino), a cheeky dessert containing ice shavings, evaporated milk and trimmings like sweetened beans, coconut gel and ube ice cream. And don’t even get us started on crispy pata – a perfectly deep-fried pork leg, served with a soy-vinegar dipping sauce – or sinigang, a delicious sour broth of vegetables and meat of your choice. The list truly goes on and on...

Luckily, Filipino food seems to be making its way to the mainstream (and rightly so), which means if you haven’t already, it might be time to jump on the jeepney and give these places a try.

On the hunt for a bargain? These are the 50 best cheap eats in Sydney.

The 9 best Filipino restaurants in Sydney 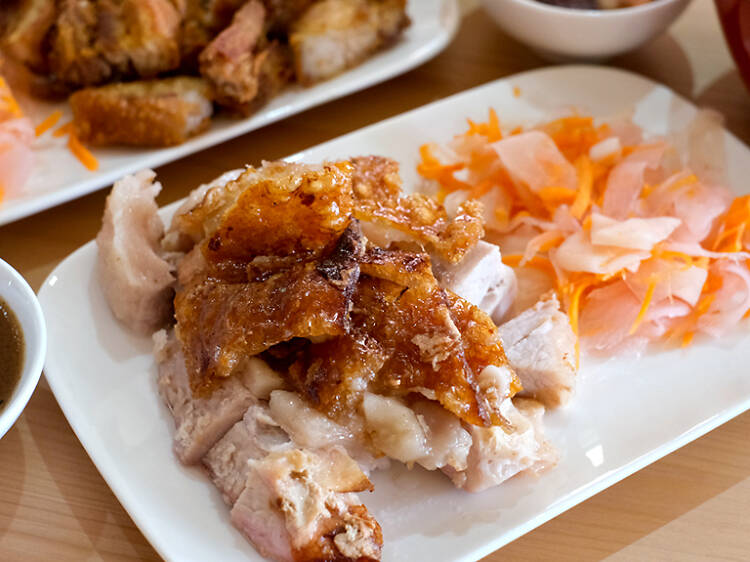 Located halfway along Newtown’s bustling Enmore Road, Sydney Cebu Lechon is a casual restaurant, serving authentic Cebuano Filipino dishes, with a native Filipino vibe. The menu here is slim but superb, inspired by the island region of Cebu – the birthplace of the people behind the restaurant. This includes the house specialty, Cebu lechon, a charcoal-roasted pork belly, full of flavour, with a distinct saltiness, as well as the braised soy chicken otherwise known as humba, a slow-cooked bird infused with vinegar, soy sauce, and other delights. And then, of course, there’s pinakbet – a popular mixed vegetable dish, sauteed in shrimp paste. Beyond the menu, the restaurant also serves up extra-friendly hospitality, greeting each and every one of the guests with a warm welcome, and thanking them kindly for their visit as they walk out the door. Something is clearly working here, since it opened in early 2019, its become a neigbourhood fixture, with a queue of keen diners often found waiting outside. 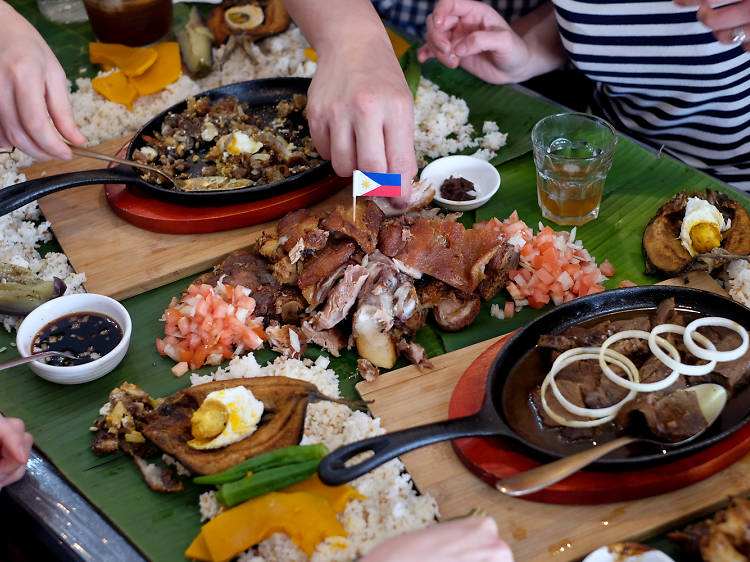 For a true boodle fight experience, make your way to Lidcombe, across the road from the train station, where you’ll find Sydney’s boodle capital, Sizzling Fillo. For the uninitiated, a boodle fight is the practice of kamayan, or eating with your hands in Filipino – so don’t expect to see any cutlery here, because you won’t be needing it. Your table will be covered in fresh banana leaves, and the restaurant’s friendly staff will pile it high with everything from crispy pata and fried milkfish with salted egg to spring rolls, grilled prawns and veggies. What you’re served depends on the type of banquet you order (and there are a few), ranging from an intimate Lovers Feast for two ($90-$110), to a group booking where an entire long table will be covered with food ($30-$40 per person). Hungry yet? 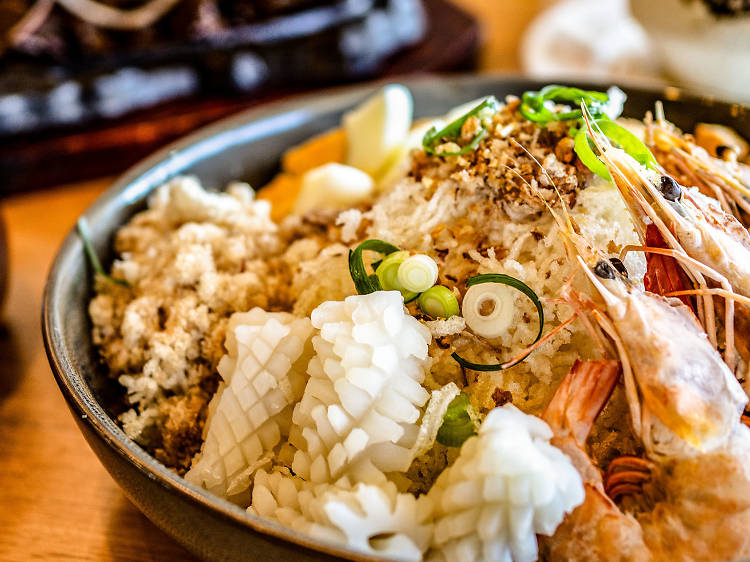 What began as a casual eatery popular amongst western Sydney’s Filipino community, has since become a full service a la carte restaurant. This once-modest grocery store in Granville has taken over the shop next door, and fitted it with simple furnishings, proudly upstaged by the colourful jeepney mural painted on the wall. Offering ‘paradise on your plate’, as the tagline states, the menu offers up everything from barbecue pork skewers (a definite crowd-pleaser) to a classic crispy pata, a dish of deep-fried pork knuckle, perfectly crisp on the outside and tender on the inside. The restaurant also invokes summer vibes, with the faithful Filipino shaved-ice dessert, halo halo available year-round, playfully served up in a coconut, and topped with all the usual trimmings. 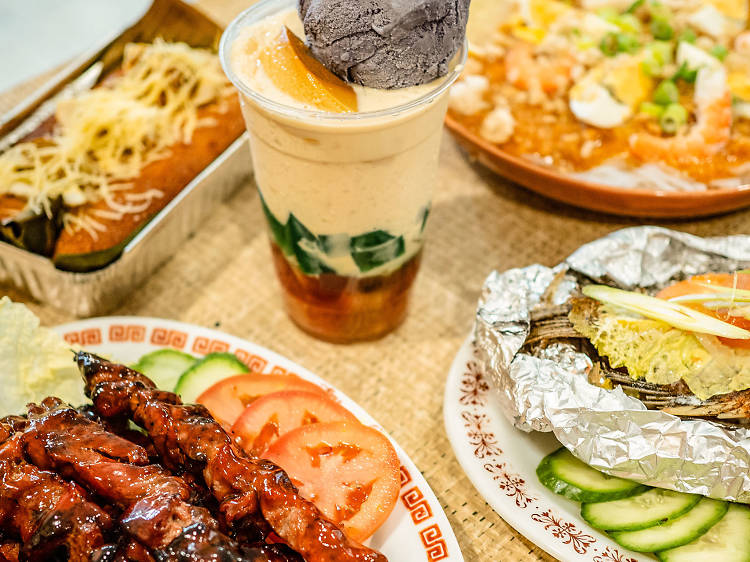 Business in front, party in the back, Panlasang Pinoy appears to be a humble grocery store when you first enter, but as you continue to walk through, you will find that this restaurant-grocer brings a lot to the table. The sheer range of dishes available on the ever-changing menu is impressive, and includes Filo favourites like crispy pata, a slow-cooked and deep-fried pork knuckle, as well as kare-kare, a dish made up of oxtail, eggplant and beans with a thick peanut gravy. Panlasang Pinoy has also gained a cult following for its barbecue offerings, from sticky pork skewers and lemongrass-and-tomato-stuffed squid, to chicken feet and pork intestines. And as for that party in the back, every Friday, Saturday and Sunday night the place turns into a $20 all-you-can-eat buffet with live karaoke. If that's not a party, we don't know what is. 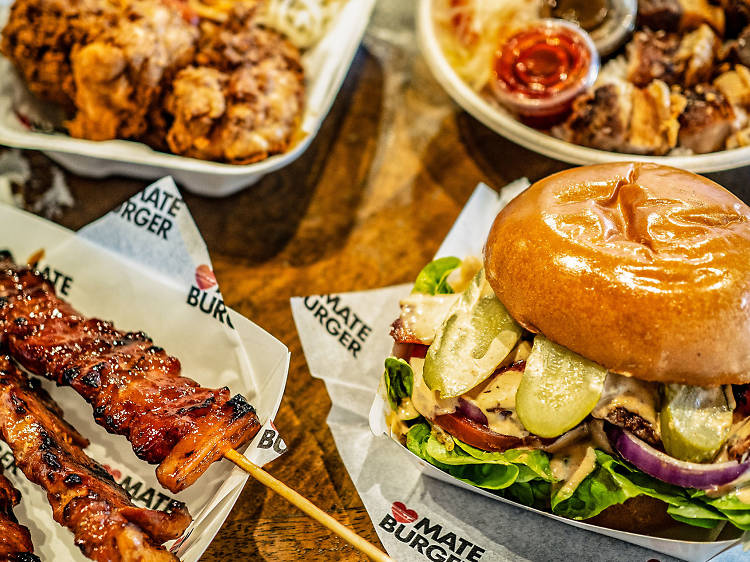 This casual takeaway and eat-in restaurant, located in the small Mount Druitt Village shopping mall, packs one heck of a punch. Serving up a fusion of Filipino and American-style cooking, Mate Burger is a bricks-and-mortar home for the popular food truck that has been doing the Sydney rounds for a number of years. Expect hearty burgers and fries with a distinct Filipino twist. The Ensaymada Burger, the most popular dish, features a smashed beef patty, creamy Kraft cheese, and candied maple and sriracha bacon, in a sweet Filipino-style bun. There’s also some reinventions of Filipino mainstays, like the chicken adobo loaded fries, which piles the classic slow-cooked chicken on a bed of hot chips, drizzled with peri peri sauce, aioli and crackling. The menu is also always changing, with monthly burger specials and rice bowls, as well as a Filipino-style spaghetti and fried chicken dish, a nod to the family-favourite meal served at the beloved Filipino fast-food chain, Jollibee. 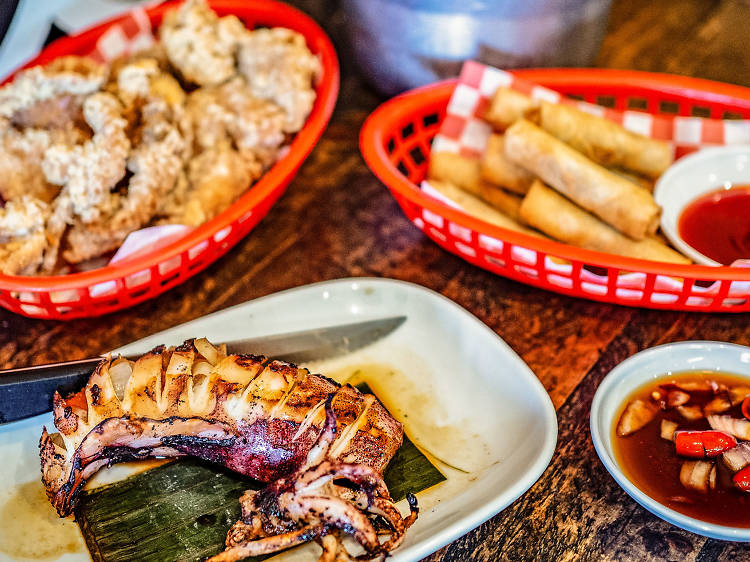 Western Sydney suburb Rooty Hill has a large Filipino population, so it should come as no surprise that there are a number of Filipino eateries dotted about the local area. From the bunch, Mama Lor Restaurant & Bakery stands out for its barbecue dishes — the very heart and soul of Filipino street-food culture, as well as a range of baked delights prepared in the restaurant’s very own in-house bakery. On the barbecue, options such as the inihaw na pusit, a grilled whole squid stuffed with onion and tomato, or the inihaw na liempo, a grilled marinated pork belly, topped with homemade barbecue sauce. As for the baked goods, there’s the ube macapuno cake, a sweet purple yam confection with sweet shredded coconut, or the cheesecake flan, a flan variation made with cream cheese, egg and milk. They’ve also got many pre-packaged Filipino-style breads and pastries you can buy, just in case you get hungry again on the way home. 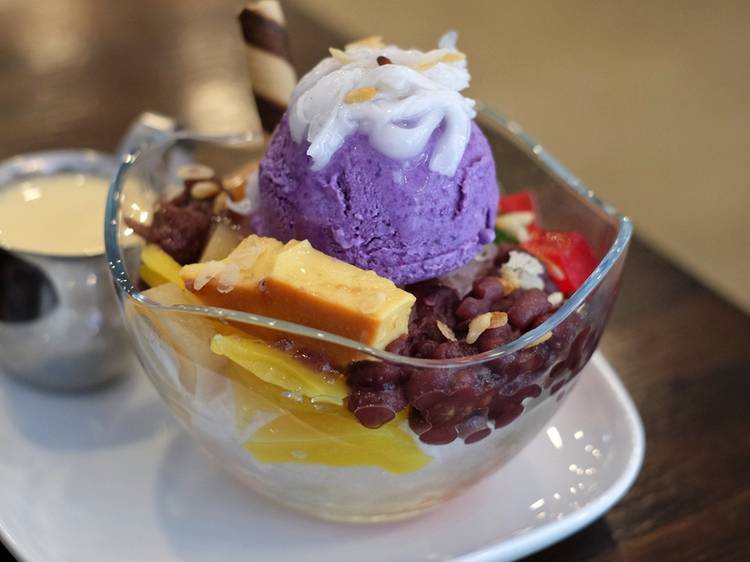 Located along Glebe Point Road, Descanso is no one-trick pony. In fact, this café which opened its doors in 2016, brings Filipino breakfast to typical Aussie café culture. On one hand, they serve popular brekky dishes such as a Big Breakfast and sweet corn fritters, while on the other, they offer a class of Filipino breakfast dishes known as silog, containing sinangag (fried rice) and itlog (egg). Each of these are accompanied by a range of meat dishes, including tapsilog (cured beef), tosilog (sweet cured chicken), and longsilog, a Filipino-style pork sausage. Come lunch time, you can choose from other hallmark Filipino dishes, like chicken and pork adobo and pork belly sisig – all of which are also served with fried eggs and garlic fried rice. There's quality coffee here, too – so your caffeine fix is covered regardless of whether you’re after an Aussie or a Filipino meal. Or both.

Need something sweet to finish? 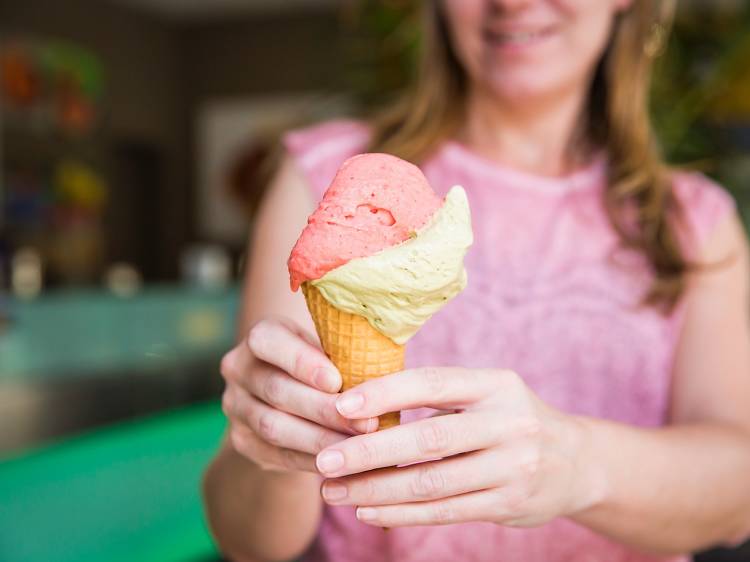 The best gelato in Sydney

Ice cream: there are a thousand places to get it – from the gummy, overly saccharine stuff, to smooth, silky excellence. Rest assured, though, that these are all in the latter category.