Short days and low temperatures are no excuse for staying inside, or even in London. Pile on those layers and head out of the capital for a unique take on the darker, chiller months. We’re talking steamy saunas, hot booze, bracing winter walks, and cosy corners to curl up in. Here’s our pick of the best winter day trips from London, all two hours or less from Zone 1. 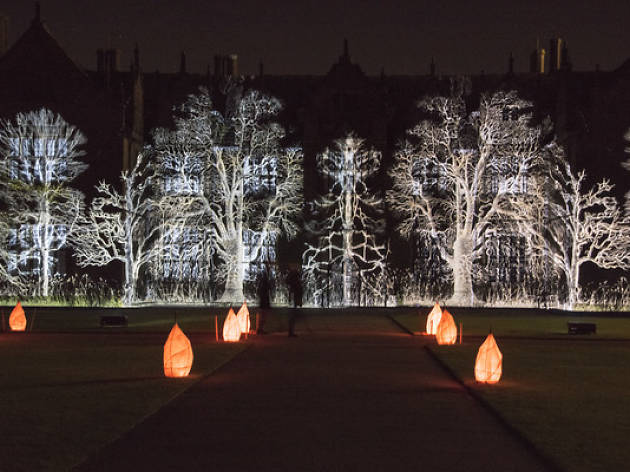 London isn’t the only place lit up with shimmering LEDs at this time of year. Swap Oxford Street’s baubles for a magical winter garden in West Sussex. Wakehurst – Kew’s bigger, rural sister site – is all aglow this November and December thanks to hundreds of otherworldly lanterns adorning its trees, water features and forest floor. Expect owls glowing in ancient oak trees, strings of astral shapes, kaleidoscopic blooms and ponds filled with flickering flames. The mellow hues make for a mega afternoon out. Plus you get to enjoy the botanical beauty of Kew Gardens without setting foot on the District line.

Get there: 43 minutes by train from London Bridge to Haywards Heath, then bus; around one hour 30 minutes by car. 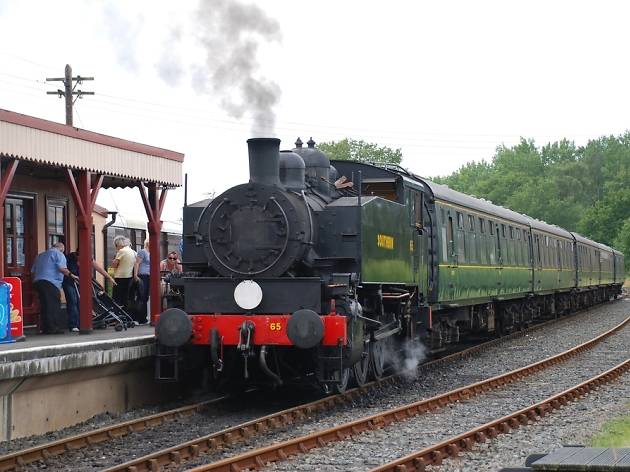 Is there anything more magical than a train journey? Okay commuters, let’s rephrase that. Is there anything more magical than an old-fashioned steam locomotive? There are steam-powered train routes across the country, and one of the closest and most charming is the Kent & East Sussex Railway – a route which runs from picture-perfect Tenterden to the small village of Bodiam. Even Santa Claus can’t resist, and in December and early January, he hops on board to hand out gifts to well-behaved children. There are also Crimbo Limbo trips, which aim to fill those awkward days between Christmas and New Year with something other than TV and turkey. All aboard!

Kent and East Sussex Railway. Tenterden, Kent. Santa Specials from £25 and Crimbo Limbo from £12, both on various times and dates, check website for details.

Get there: 53 minutes by train from London Bridge to Headcorn, then 20 minutes by bus. 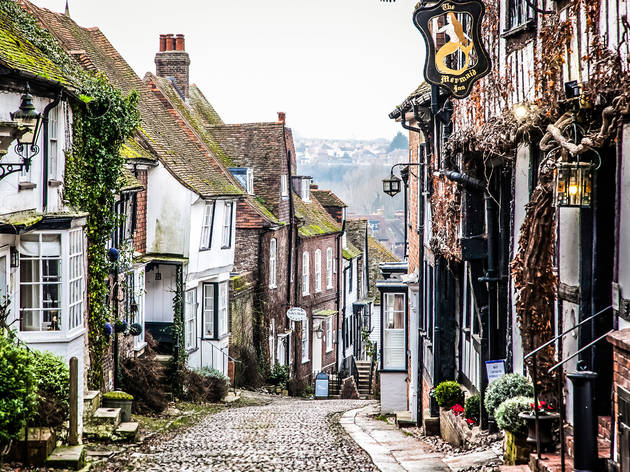 Warming your toes by a proper fire is one of the best things to do in the chillier months, and nowhere does roaring blazes better than a country pub. Spend an afternoon hopping from one cosy boozer to another along Rye’s cobbled streets. Grab a log-side seat and a Sussex real ale in The George (High Street) before heading to the Globe Inn Marsh (Military Road) for a toasty hour or two with a warming glass of red in hand. As the temperature plummets, trot back into town and pull up a chair beside the ancient Mermaid Inn’s enormous fireplace (Mermaid Street). Fun fact: it comes complete with priest’s hole (no sniggering, please) and is where local smugglers used to hang out in the 1700s.

Get there: one hour eight minutes by train from London St Pancras International; around two hours 30 minutes by car. 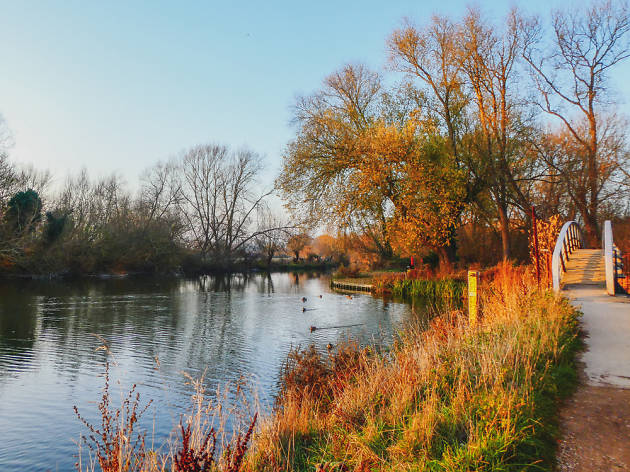 Whether you want to walk off the nut roast, exercise the dog or escape the family, at some point over the festive break you’ll need to leave the house. If walking is your thing, make the trip to Oxford for this gorgeous stroll over ancient meadows. Spot ponies, wild flowers and the River Thames looking pretty on this tranquil stretch of common land. And city folk relax: it’s reassuringly close to civilisation and the quaint streets of the university city. After stretching your legs and admiring the views, find a spot by the fire at The Perch, at seventeenth-century thatch-roofed pub framed by an old willow tree. Their mulled cider is worth the trip alone.

Get there: Around one hour by train from Paddington Station to Oxford. 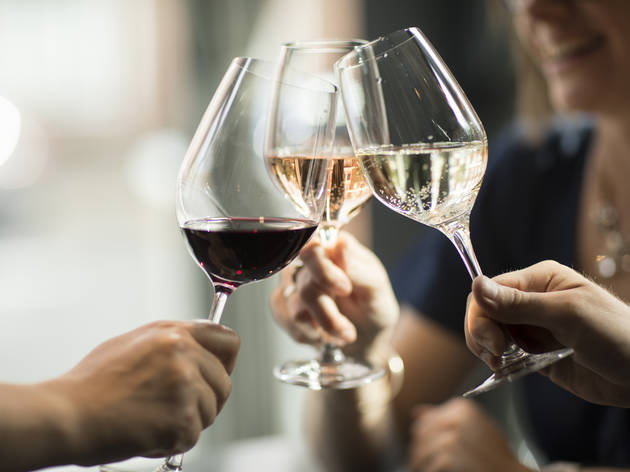 Like a marathon runner building up to a race, prepare your body for the festive influx of food with a trip to Chapel Down in the Kent countryside. Visit the vineyards and tour the winery to whet your appetite, before settling down for a tutored wine tasting. Each glass of vino will be paired with an English cheese – we’re talking hard, full-flavoured rounds and seriously strong blue stuff with grapes and crackers. Chuck on your stretchiest trousers and you’ll be in great shape come December 25.

Get there: 55 minutes by train from London Bridge to Headcorn then taxi; around one hour 45 minutes by car. 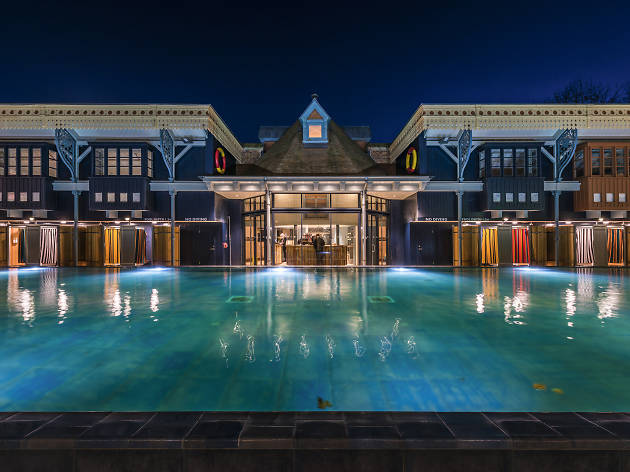 Stripping down to your swimmers might not seem like an obvious wintertime activity, but Thames Lido is a real delight, whatever the season. Brave the chill in the air to spend a softly lit evening in this whimsical, Grade II-listed stunner. The pool, heated to around 23 degrees, might feel a little fresh, but you’ll soon warm up after a turn in the open-air hot tub and colourful sauna. Your post-swim reward is a festive two-course dinner in the twinkly poolside restaurant. Who said lidos are just for summer?

Get there: 25 minutes by train from London Paddington to Reading; around one hour 15 minutes by car. 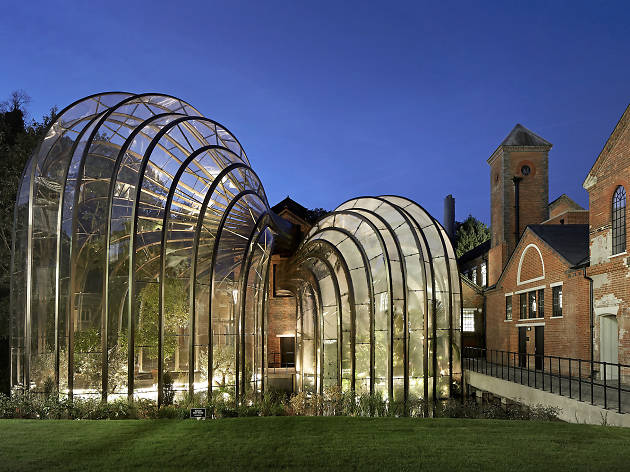 Hosting a festive shindig? Brush up on your cocktail-mixing skills at the Bombay Sapphire Distillery. Learn all about the gin-making process (stellar party small talk, sorted) and explore its botanical glasshouses. Take an hour-long tutored cocktail masterclass to learn how to shake up (and then sample) fruity blends and perfect Gin Martinis.

Get there: 55 minutes by train from London Waterloo to Overton, then bus; around one hour 30 minutes by car. 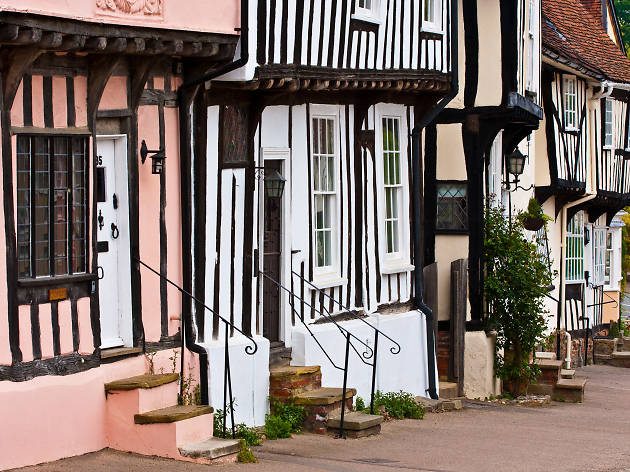 Teeming with half-timbered medieval halls, cute cottages and pastel-painted shopfronts, the teeny, time-warp village of Lavenham is lovely-looking at any time of the year. It’s even dreamier during the Christmas fair which runs for three days in early December. Wrap up warm and set off after dark to explore the stalls, funfair rides and late-night shopping in the Market Square. By the time you’re sipping mulled wine and listening to carol singers, Lavenham will have charmed your thermal socks off.

Get there: one hour 20 minutes by train from London Liverpool St to Sudbury then bus; around one hour 45 minutes by car. 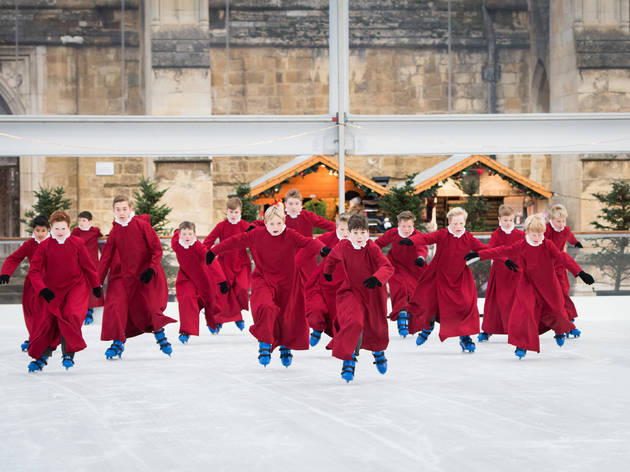 John Lewis’s rooftop rink not ringing your Christmas bell? Swap London’s sky-high urban rinks for a trad slab of ice in the shadow of an ancient cathedral. Historic Winchester’s Cathedral Close, uplit in technicolour, is the setting for a festive celebration that attracts thousands of skaters each winter. If you’re a bit like Bambi on ice, swerve the slipping hazard and wander around the seasonal market chalets or pop into a rousing Christmas carol concert instead.

Get there: one hour by train from London Waterloo; around one hour 40 minutes by car. 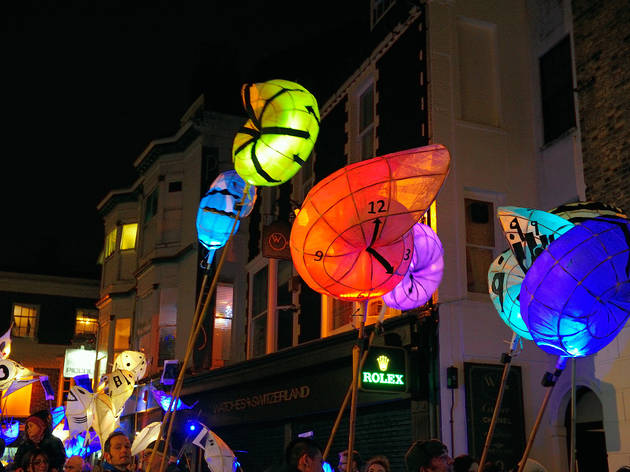 Watching the light fade out of your office window hours before you leave for the day can make even the cheeriest of us feel a bit down. Rather than hibernating till March, channel your inner pagan and embrace the longer nights. The night of Friday December 21 – aka winter solstice – is as long and dark as it gets, and Brighton is marking it by getting lit. The annual Burning the Clocks parade sees the city taken over by brilliant lanterns which snake around the streets before being passed on to a huge midwinter bonfire on the beach. Summer, we’re so over you.

Get there: one hour by train from London Victoria; around two hour 20 minutes by car. 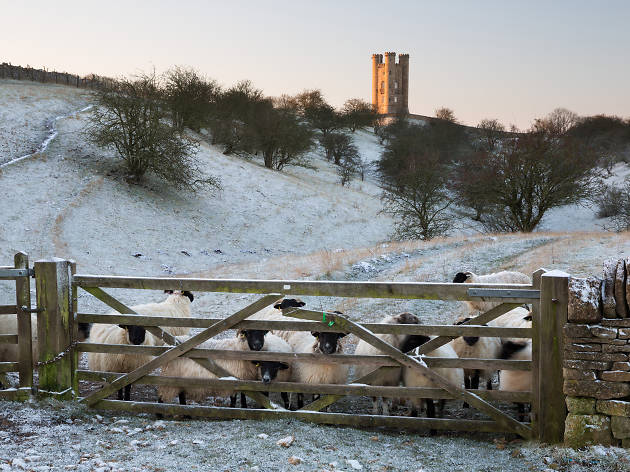 When the crowds in central London get too much, ditch Zone 1 for a field in the middle of nowhere. For a day of wintery repose, head to the Cotswolds and stride across some frosty fields. The village of Broadway, with its honey-coloured cottages, sweet shopfronts and rustic pubs, is an excellent place to start. Earn a pub lunch by strolling up to the grand turrets of Broadway Tower and admiring the view or, if you’re feeling energetic, hike part of the bucolic Cotswolds Way from Broadway to pretty market town Chipping Campden. Last one to the pub gets the first round in, yeah?

Get there: one hour 35 minutes by train from London Paddington to Moreton-in-Marsh then bus to Broadway; around two hours by car. 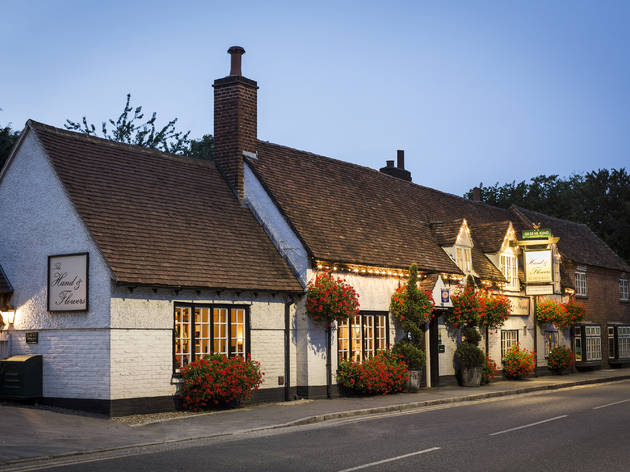 Home cooks beware: a trip to this humble pub will put your roast dinner to shame. It’s worth it though, just to say you’ve been to the only pub in the UK with two Michelin stars: Tom Kerridge’s The Hand and Flowers. There’s no overcooked turkey here, more like loin of Cotswold venison with maple-roast pumpkin or beer-roast chicken with salt-baked celeriac. And if all that sounds catastrophically out of your budget, pull up a stool at Kerridge’s pub The Butcher’s Tap, scoff a pork pie and take on the locals at the weekly pub quiz.

The Hand and Flowers. Marlow, Buckinghamshire.

Get there: One hour 30 minutes from Paddington to Marlow, changing at Slough and Maidenhead; one hour 20 minutes by car.

Staying in London this winter? 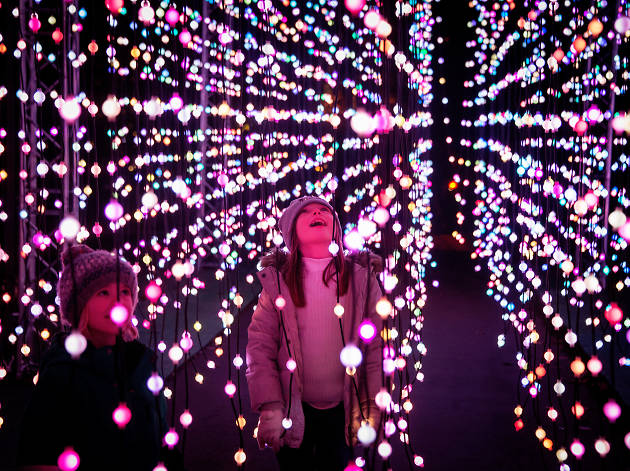 We’ve got the big day tied up in a bow and the run-up to the festivities sorted...