No, when we talk about ju paa here we’re not talking about ugly ladies (as per local slang) but that beautiful combination of pork and rice. Like that other HK classic, cha siu and rice, pork chop and rice is one of our city’s fundamental dishes. There are many variations across town and the quality is equally varied. So where to find the best in town? Annette Chan has you sorted...

And if this doesn’t satify your appetite, why not try Hong Kong’s best dim sum or the best restaurants in Tai Po? 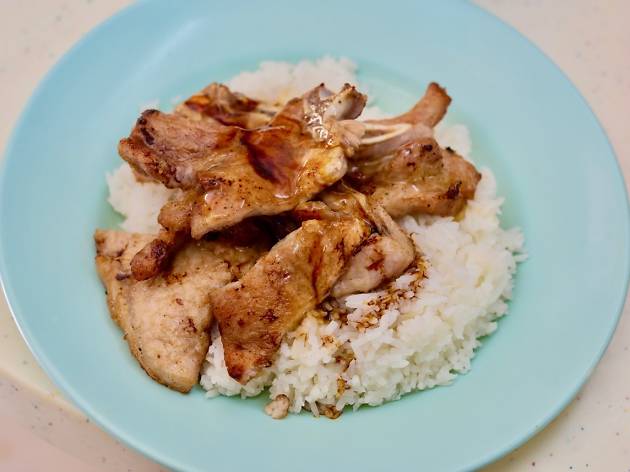 Despite the increasing number of buzzy restaurants and artisanal coffee shops in Sheung Wan, one of the neighbourhood’s most popular lunch spots is this decades-old family diner. Reportedly opened by a health-conscious Chinese medicine practitioner, this hole in the wall is best known for its no-frills ‘gold medal pork chop rice’, which consists of two basic components: white rice, and impossibly tender pork marinated in sweet soy sauce. We like ours with an egg on top, sunny side up. 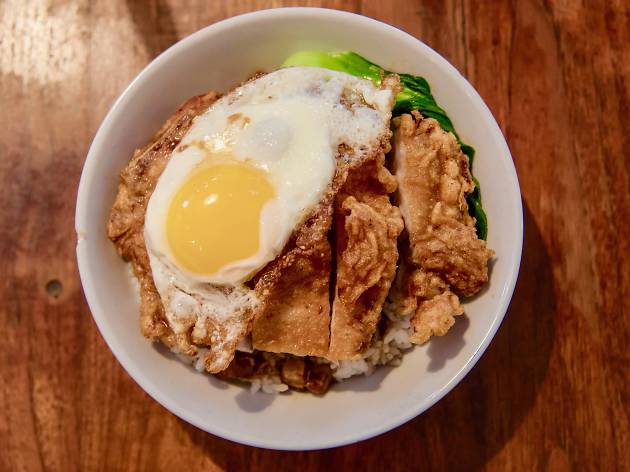 As evidenced by its name, logo, and motto – ‘We all grew up eating pork’ – this retro Causeway Bay joint takes the humble hog seriously. Its popular homemade pork chop rice is dotted with cubes of Taiwanese-style braised pork belly and topped with deep-fried pork chop. A seasonal ginger and scallion version with white rice offers a fragrant, lighter alternative. Hogology’s cart noodle-esque order sheet allows diners to customise their order with different sauces and toppings, which is always a win in our books. 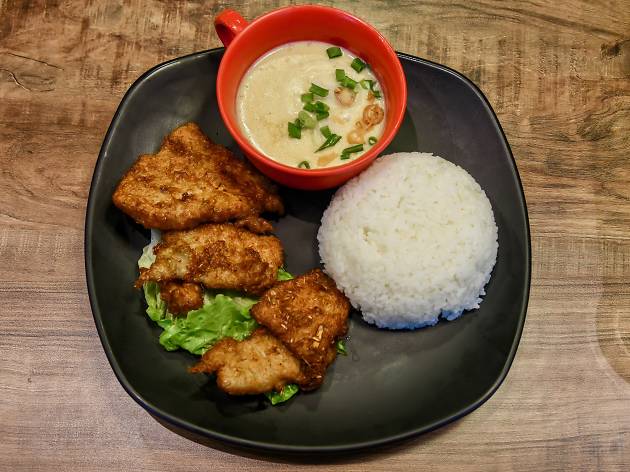 Look past the inexplicable pirate theme at Satay King and you’ll find unexpected treasures, like its signature lemongrass pork chop with white curry. Thick cuts of tender pork are fried with ample amounts of lemongrass and served alongside hearty coconut-flavoured curry and mound of white rice. While both the meat and sauce are a touch oilier than we’d like, we can’t deny that they go down a treat. 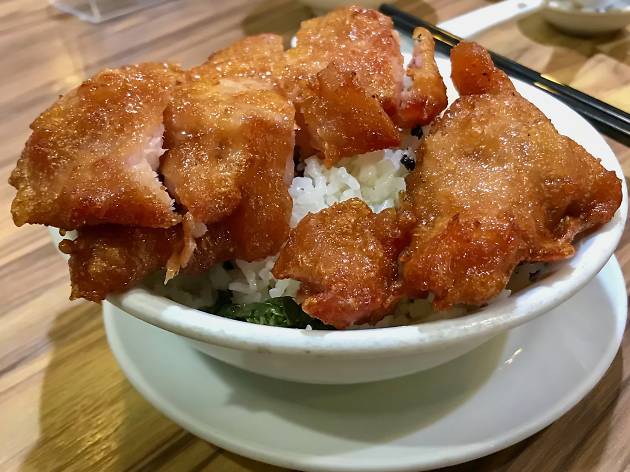 Delicious Kitchen may operate in the city’s glitziest shopping districts, but its food is anything but pretentious. This Shanghainese restaurant consistently draws crowds in Causeway Bay and Tsim Sha Tsui every day by living up to its name with delicious, reasonably priced pork chops. The juicy rib chops are encased in crunchy golden batter, lightly glazed with honey and taste just as good as they sound. A generous portion of steamed bak choi rice serves as the perfect contrast to the meat and makes us feel slightly better about the frequency of our visits. Slightly. 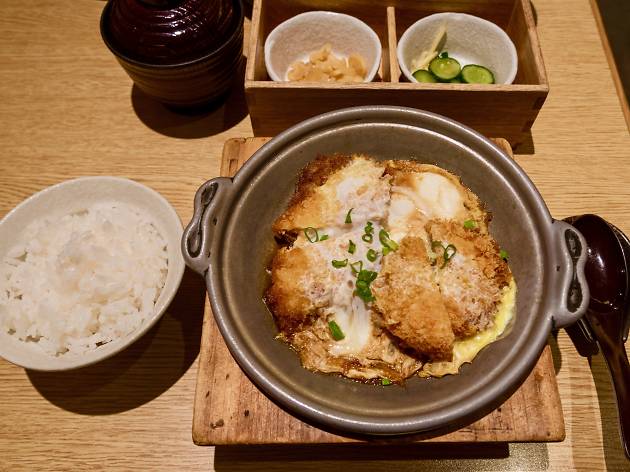 While this Japanese tonkatsu chain may be best known for its mille-feuille-style pork cutlets, its other porcine dishes are not to be sniffed at. One particularly satisfying alternative – the “bitesized” katsu tenderloin – comes on a sizzling hot plate with crispy breaded meat, lots of onions, and delightfully smooth, soy-drizzled scrambled eggs that bring to mind Cantonese silky egg (wat dan) dishes. Add unlimited refills of rice, miso soup and salad and you’ve got yourself a winner. 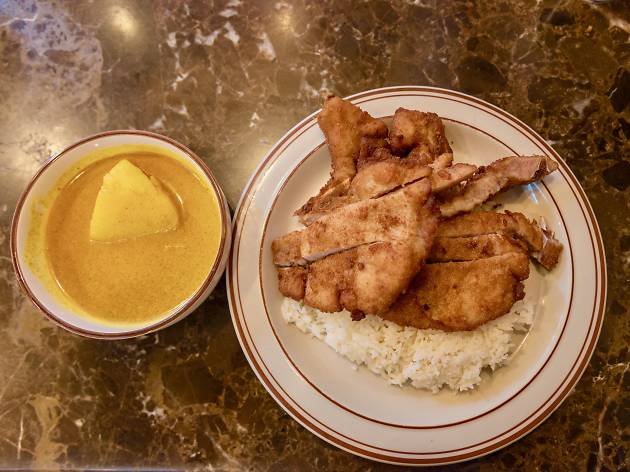 This classic curry house in Wan Chai is famed for its pork chops, and is one of the few tourist attractions in the district that locals still love (we’re looking at you, Lee Tung Avenue). Here, an above-average $78 gets you a very generous portion of juicy, lightly battered pork chops, white rice, and enough rich curry sauce for two. While there’s been grumbling from regulars about price inflation over the years, the hefty servings and friendly staff more than make up for it in our eyes. Pro tip for penny pinchers: to-go orders at lunchtime are only $42. 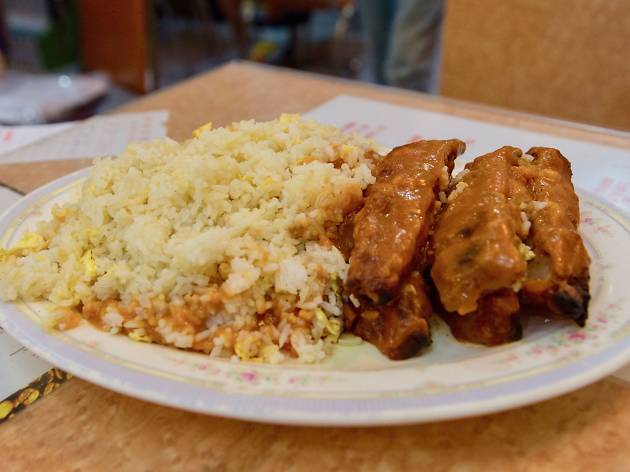 Few dishes are as synonymous with old Hong Kong as baked pork chop rice, so where better to eat it than a cha chaan teng? Luen Wah has been serving up solid comfort food to Sai Ying Pun locals for decades and its baked chops do not disappoint. Slightly fatty, meaty chops are slathered in a thick tomato sauce, baked until lightly charred and come with a veritable mountain of egg fried rice and a side of soup. What’s not to like? 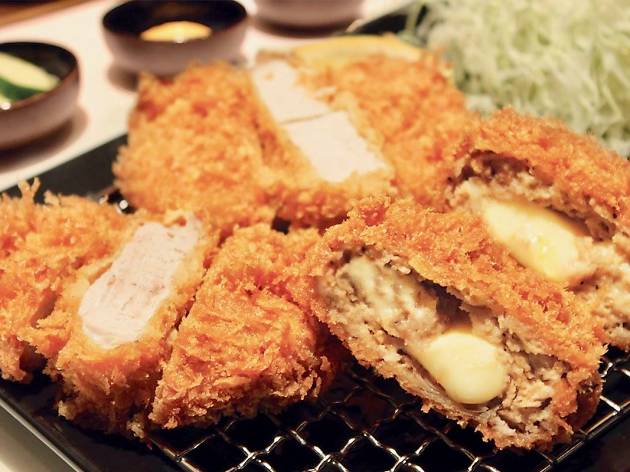 Don’t be fooled by this cosy little restaurant’s focus on the humble tonkatsu. This relatively new kid on the block was opened by the folks behind one of Hong Kong’s best yakiniku restaurants, 298 Nikuya, and it shows. The small, stylish space serves high quality aged Kagoshima pork during the day and doubles as a saké bar at night (although we certainly won’t judge you for having the saké pairing at lunch). The signature ‘full house set’ comes with thick cuts of aged sirloin and tenderloin meat, mincemeat cutlets filled with molten mozzarella and an array of sauces. It’s best to come hungry as the set also includes rice, salad, soup, and pickles. 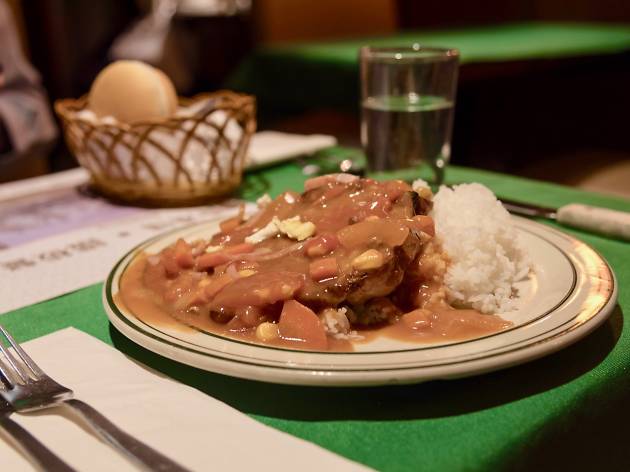 Fans of Hong Kong director Wong Kar-wai will need no introduction to Goldfinch, the 60s eatery featured in In The Mood for Love and 2046. This steakhouse specializes in homely Canto-Western fare such as Hong Kong style borscht and the lesser-known ‘sa dan’ pork chop rice – often amusingly transliterated as ‘Satan’ on English menus. The chops are covered in a tomato-based sauce with diced vegetables and pieces of fried egg and come with fluffy white rice. While the dish might not be hellishly good, Goldfinch gets marks for its comforting taste of old Hong Kong and the chance that we may have plonked our bottoms on the same seat as the impossibly elegant Maggie Cheung. 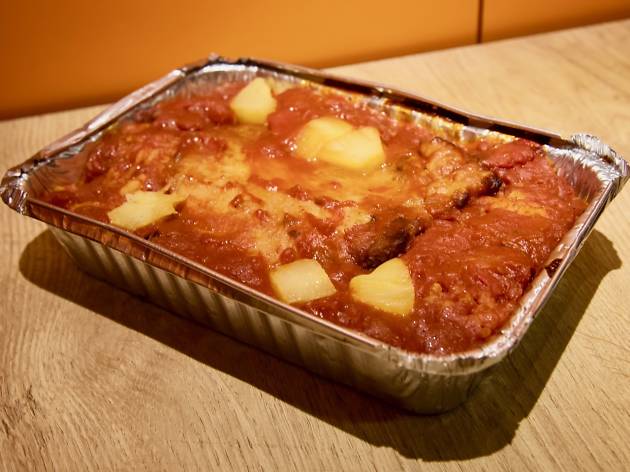 Without fail, every single Hongkonger consulted for this article suggested Fairwood, the cheap and cheerful fast food chain – a choice which shouldn’t be that surprising given the unpretentious and ubiquitous nature of baked pork chop rice in this city. Even less glamorous is the aluminium tray the takeout version is served in, but it does a bang up job of keeping the pork piping hot. Compared to its competitors’ overstuffed versions, Fairwood’s baked pork chop rice is practically minimalist, with only egg fried rice, meat, tomato sauce and pineapple, but it just works. 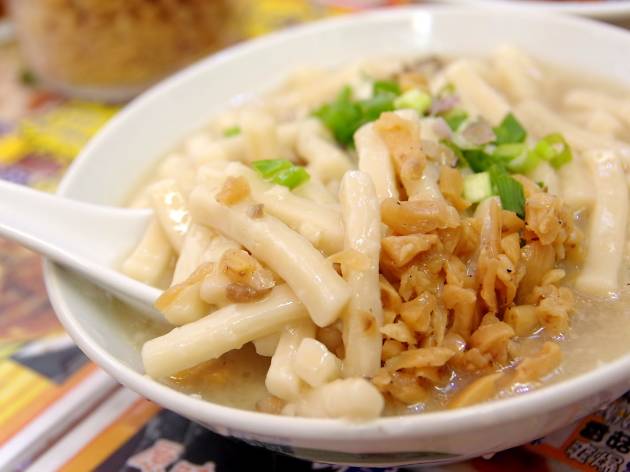