Love Japanese cuisine but worried about getting a raw deal? Try these great restaurants for the best sushi and sashimi in London

Sushi doesn’t just mean raw fish, rice and seaweed paper – although there’s plenty of excellent examples of that kind in the capital. No, sushi can have many forms: fishy forms, meaty forms and even vegan forms. In London, you can eat it in Michelin-starred restaurants, at long counters and with breathtaking views. Or, if you fancy you can eschew sushi and go for a steaming hot bowl of ramen instead.

Here’s our list of London’s best sushi restaurants covers all this ground and more, so have a browse and then book your next Japanese feast.

The best sushi restaurants in London 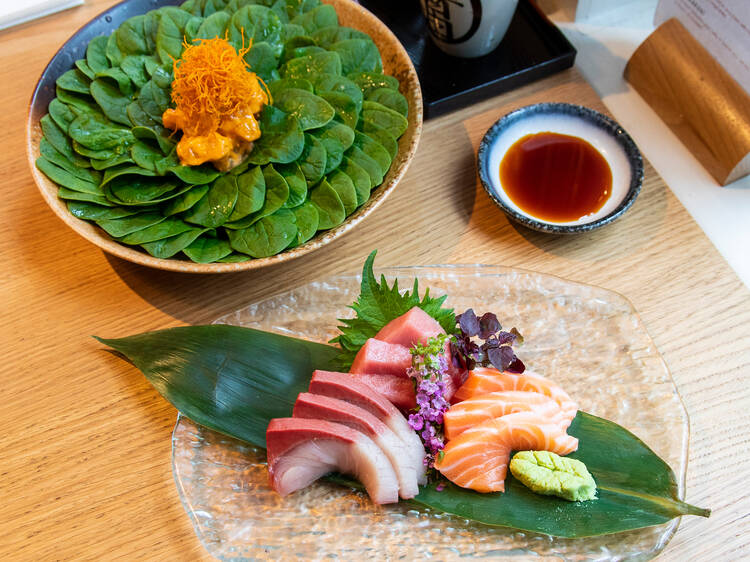 A great escape from West End shopping bedlam, calming Chisou is an unobtrusive shoo-in for aficionados of pure-bred traditional Japanese cuisine. The sushi counter flanking this traditional Japanese restaurant in Mayfair takes its art seriously: expect platters of cut rolls tightly wrapped with nori or glistening slices of fish, beautifully presented with slivers of vegetables and dots of wasabi. Sushi connoisseurs are welcome to go off-menu here. There’s also an offshoot in Knightsbridge. 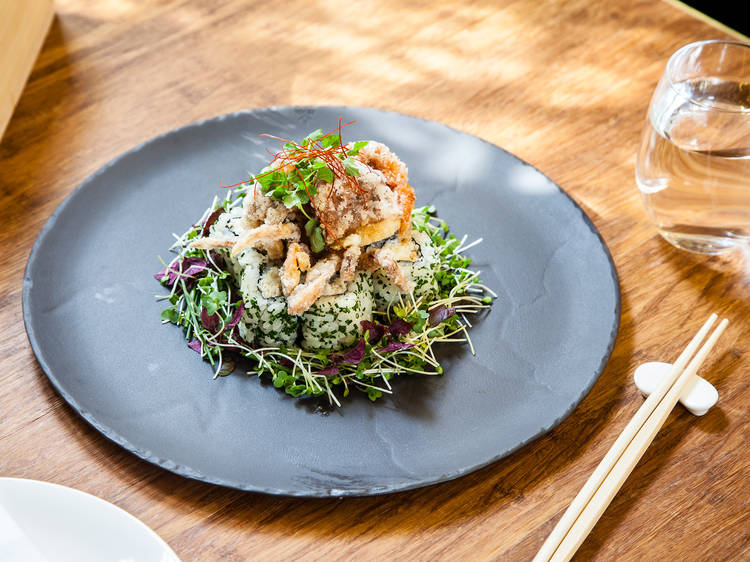 Everything about this Japanese fusion restaurant in Marylebone is impressive, from the glitzy, capacious interiors to the quietly ambitious, head-turning menu. Park up at the luxurious L-shaped marble counter and watch in awe as the chefs perform their micro-surgery. Everything is tiny on the plate, but precision-tuned signatures such as the ‘modern’ sushi and sashimi are a real wow.

Endo at the Rotunda

Formerly executive sushi chef of the Zuma group, Endo Kazutoshi is the main man behind this 15-seater Japanese restaurant up on the eighth floor of the Television Centre Rotunda. Unlike most omakase (‘chef’s selection’) joints in London, this one is spacious, stylish, buzzy and noisy, with plenty of cheffy action to watch as you sit at the long L-shaped counter. Expect flawless edomae nigiri and new-style sushi, plus some equally dazzling sashimi. In short, a near-perfect omakase experience. 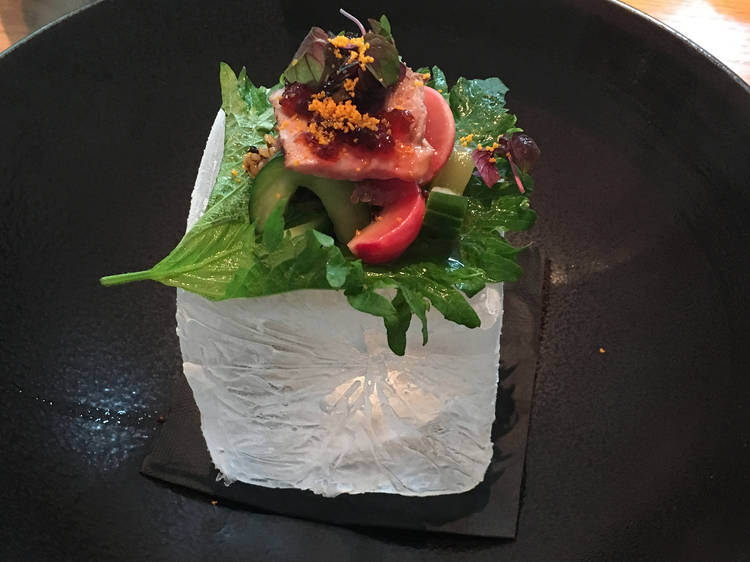 It may be famed for its exclusive kobe beef, but this meticulously designed Japanese bolthole also gives good sushi from its bijou premises on Ham Yard. You can enjoy pretty nine-piece platters of hummingly fresh nigiri (with soup) as part of the omakase menu or pick from the carte, which also includes various vegetarian sushi. Served in a swish room dominated by an ornate chandelier decorated with hand-stencilled calligraphy, it’s all very serene ’n’ clean. 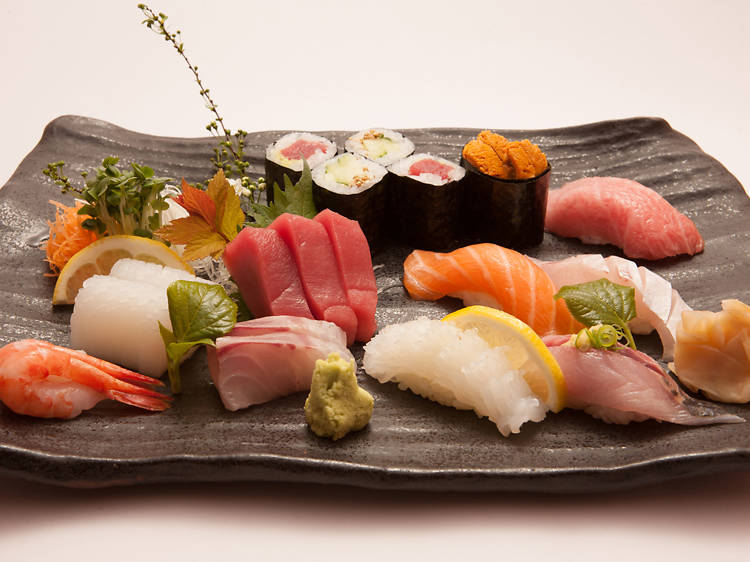 With testimonies from the disparate likes of George Clooney and Led Zep axeman Jimmy Page, the long-serving Ikeda is a cut above in the celebrity sushi stakes – although conservative businessmen have no qualms about bringing clients here. This place is old-school (affable, super-polite staff, inoffensively trad decor, lofty prices), but consistency is the order of the day – briny-fresh sushi sets served the old way on wooden blocks. Bag a ringside seat by the tiny open kitchen for a high-end, gimmick-free experience. 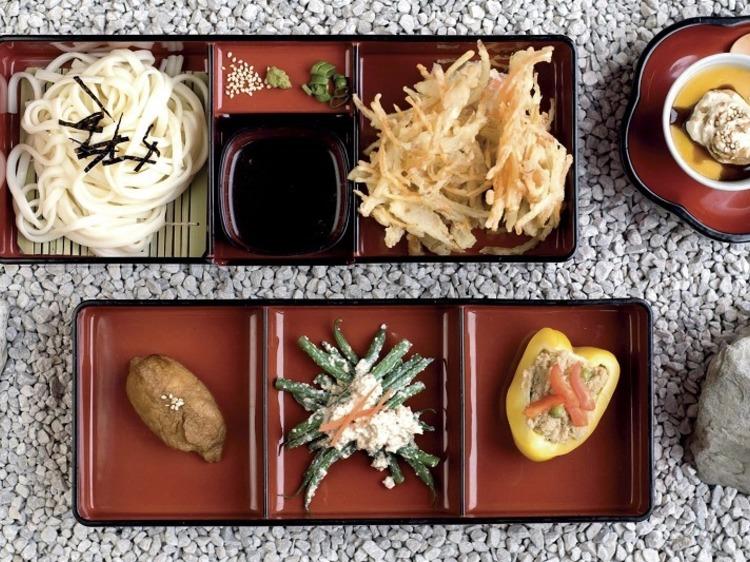 Japanese, vegan and organic? What’s not to love? And, rest assured, we do love this cool little miracle not far from King’s Cross station. The virtuously healthy menu offers its own spin on sushi, meticulously fashioned with various combinations of vegetables and seaweed on rice (where appropriate). Casually dressed, laidback staff go with the flow, while zealous foodie workshops, art exhibitions and other events make Itadaki Zen even more lovable. 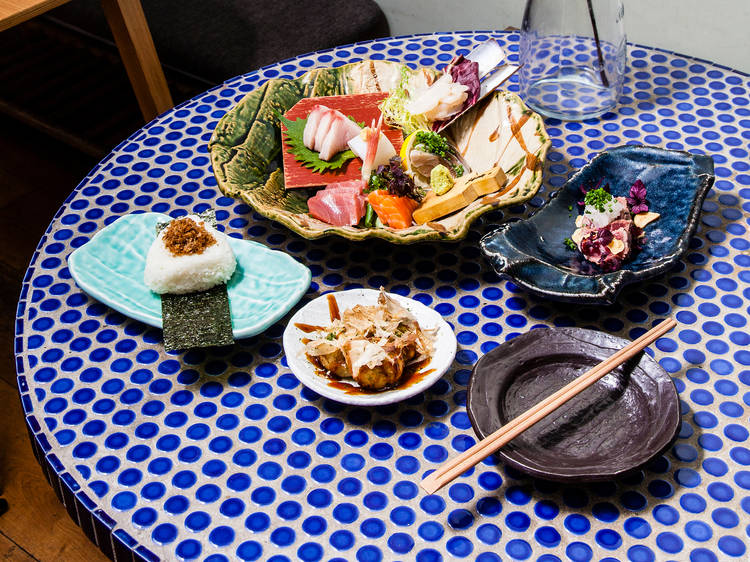 Japanese temaki rolls are awesome, especially at Jugemu in Soho, where they’re made to order for punters sitting at the counter. Each little package is packed with super-fresh ingredients and handed over the instant it’s ready, the nori wrapping still crisp. Alternatively, bag a table for full platters of sushi and sashimi. In keeping with its rustic vibe, Jugemu doesn’t have a website, but you can get updates on its Facebook and Instagram pages.

It’s not big on ambience, but high standards and modestly priced sushi mean there’s rarely a spare table in Kiraku’s brightly lit dining room next door to Ealing Common tube. Otherwise, perch at the counter and feast on impeccable raw fish for around £20 – that’s a win in sushi territory. As a sampler, try the Kiraku special – salmon skin, cucumber, tobiko and ikura (salmon caviar) served on a wooden block with pickled ginger. 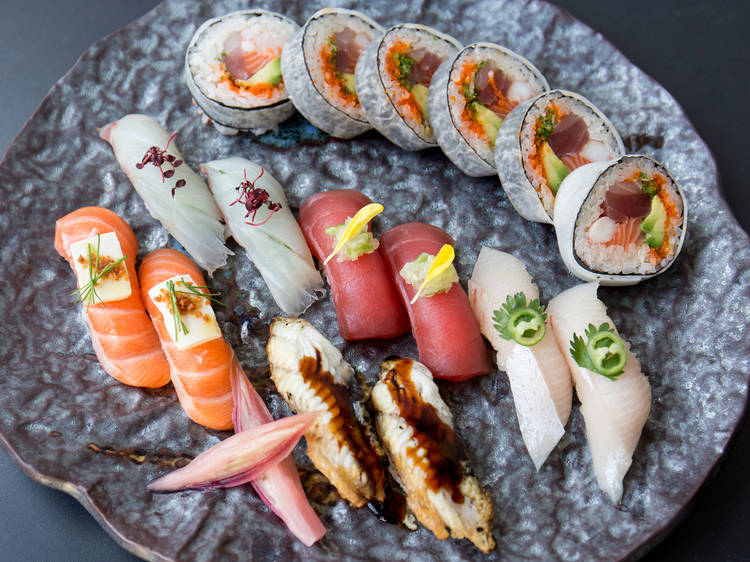 Nobu Matsuhisa’s Japanese fusion style redefined expectations when he launched his global Nobu chain (remember his iconic black cod in miso), but the sushi at this Park Lane outpost is also pretty special. Don’t miss the intriguing ‘new-style’ sashimi, the well-shaped temaki rolls or the classic nigiri, served in a ten-piece ‘cup’ if you want. Also try the sushi at the Nobu Hotel in Shoreditch. 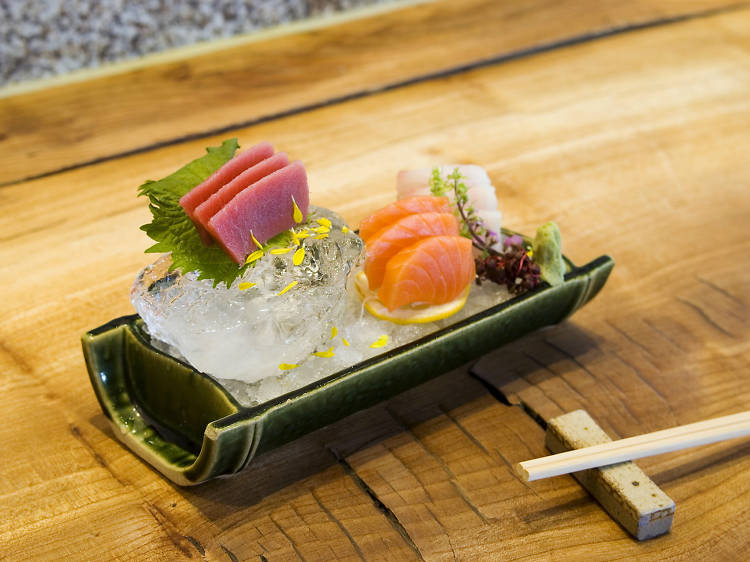 As a stablemate of Zuma, Roka gets the gold seal of approval from sushi aficionados. Elegantly presented platters on crushed ice are a highlight of the tasting menu at this Fitzrovia outpost, but it’s also worth splashing out on specialist maki rolls from the carte – perhaps spicy yellowfin tuna with cucumber, chives and tempura flakes or crispy prawn with avocado and dark sweet soy. There are branches in Aldwych, Canary Wharf and Mayfair. 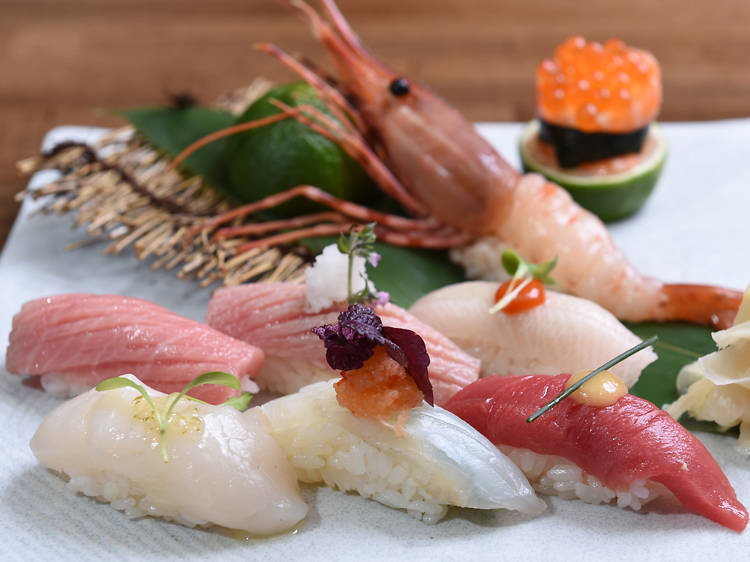 So’s long curved sushi counter gets our vote over its polished contemporary dining room, largely because we’re hooked on its exemplary choice of superbly fresh seafood. The must-try specials menu goes way beyond the usual suspects with its selection of nigiri, maki, chirashi and sashimi (including some meat-based items for distraction). On a typical day you might find anything from mackerel timber rolls to wagyu beef and pan-fried foie gras. 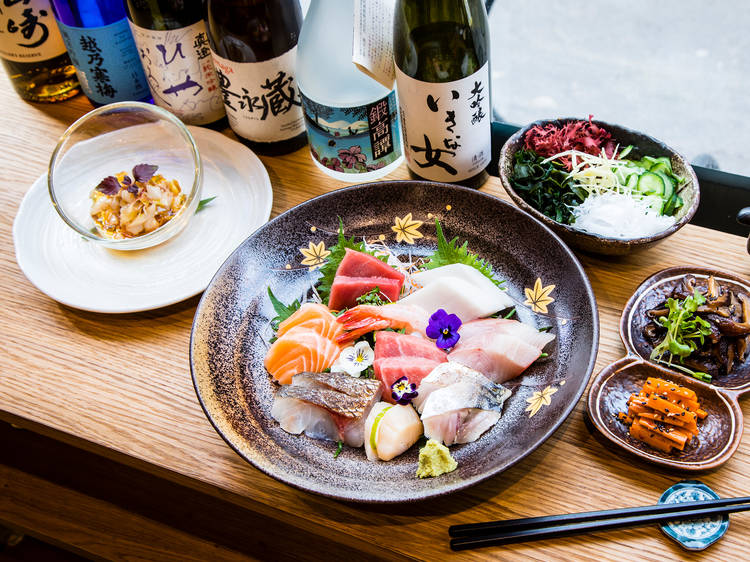 Small but lovely, this sibling of Mayfair’s Chisou offers the best of both worlds: it feels old school, but the music’s upbeat, there’s a vivid geisha mural splashed on one wall, and the kitchen is manned by a brigade of blowtorch-wielding chefs from all nations. Sushi fans congregate at the brightly lit counter, where they can drool over modish carpaccios, silky o-toro tuna sashimi and market-fresh omakase sushi sets: perfect for a Japanese lunchtime sweetener and great fun too. 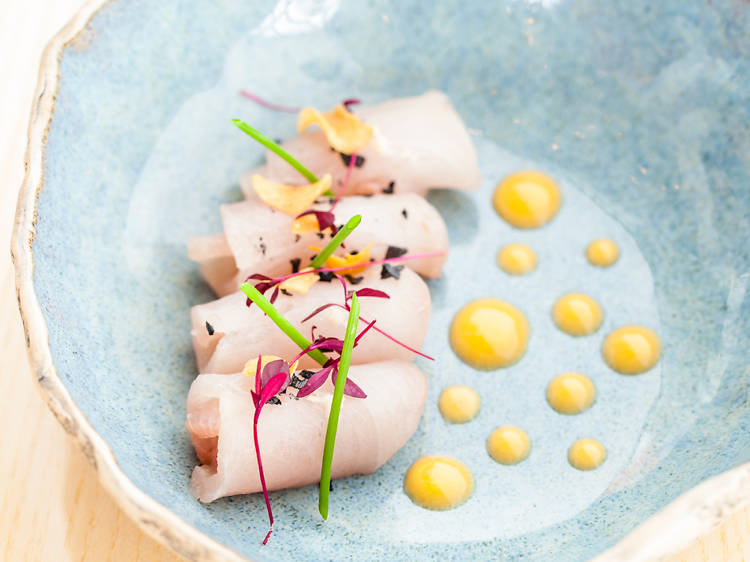 Sushi in the City (with sky-high views thrown in) means serious money, but the raw fish at this Japanese/Brazilian/Peruvian showstopper won’t leave you feeling short-changed. We guarantee that the signature samba roll selection, the nigiri omakase sets and the unusual vegan nigiri will distract you from the panoramic vistas: no mean feat. Each plate is a riot of colour and eye-popping visual presentation, but there’s freshness and sublime delicacy too. Also check out Sushisamba in Covent Garden. 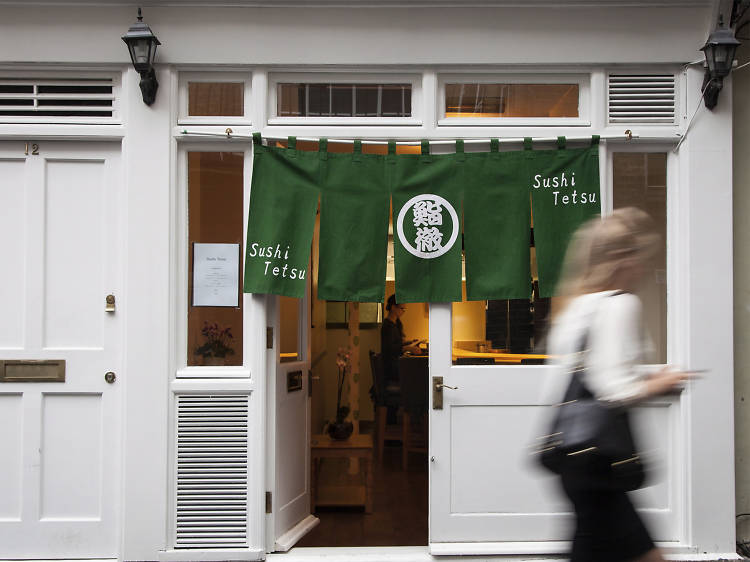 CURRENTLY TAKEAWAY AND DELIVERY ONLY

You can only book a perch at this seven-seater sushi joint online (and it’s a real palaver), but there’s no doubting that Sushi Tetsu is up there with the best in town. Toro Takahashi is a master of his craft: every piece of fish is as briny-fresh as can be, and each pitch-perfect mouthful is prepared by hand in front of your very eyes. Expect a three-hour omakase banquet and brace yourself for a three-figure bill (per person) at the end. 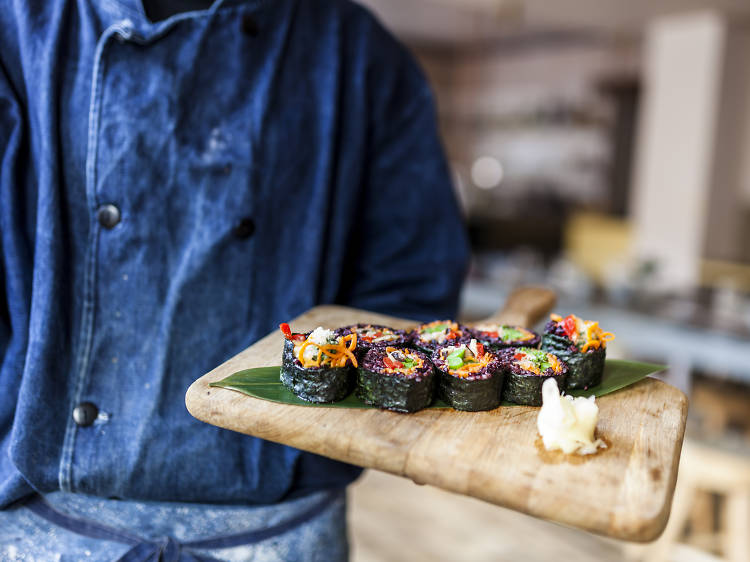 The surroundings are as eye-catching as the sushi at this Japanese spot on the fringes of Hackney, where the brushed gold countertops, soft lighting, dainty crockery and pretty glass vases filled with delicate foliage are all worthy of a Pinterest board. Although the fish is top-drawer, veggie combos are an unlikely standout here – don’t miss the mushroom-and-spinach nigiri with hints of sesame, or the shiso daikon with asparagus, cucumber and sour plum paste on black rice. 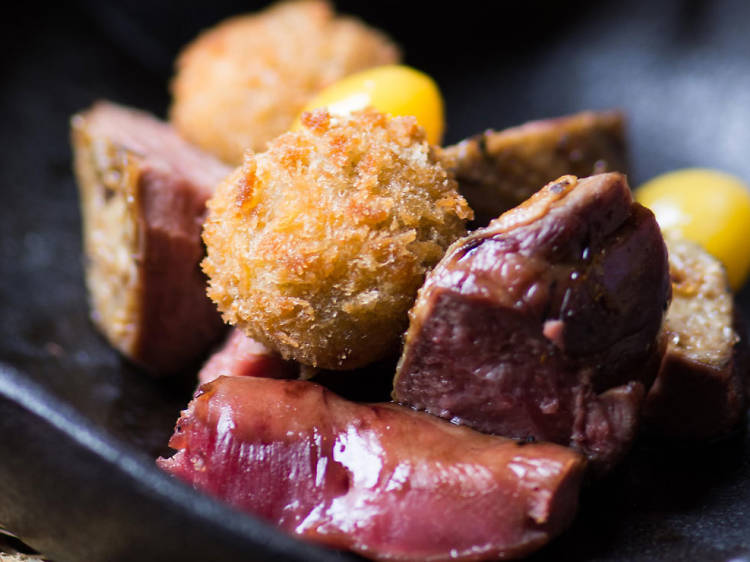 It’s all about attention to detail at Yoshinori Ishii’s two-Michelin-starred enclave in Mayfair, from the chef’s handcrafted tableware and bespoke wood-block poems to the procession of surgically precise, extraordinarily delicate sushi emanating from the kitchen. You can sample these delights from the carte or as components of a full-strength multi-course banquet highlighting the intricacies of Kyoto kaiseki cuisine. Just be warned: the bill will slice through your wallet as mercilessly as a samurai sword. 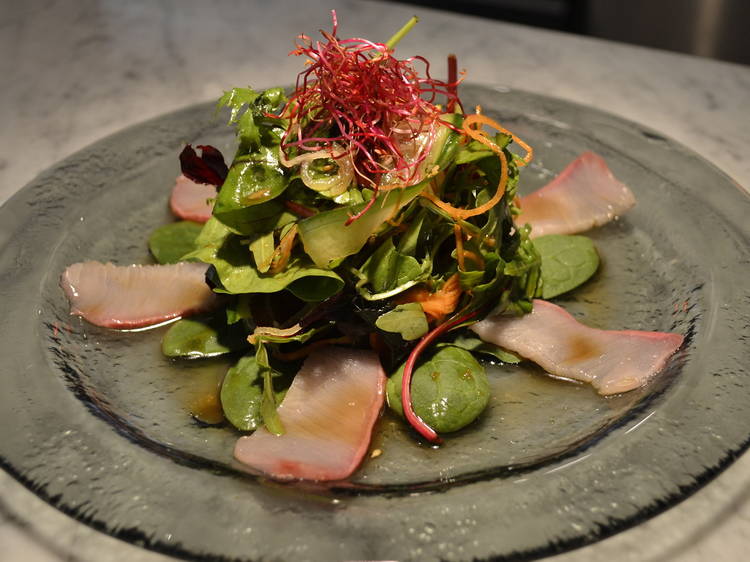 Sushi nerds congregate at Uni’s street-level counter in Belgravia, but similarly refined seafood – including the titular ooni (sea urchin) – is also served in the bijou basement dining room. You can have your sushi traditional or ‘new style’, with back-up from various takes on the hand roll (uramaki, temaki, pirikara etc), plus undercurrents of nikkei (Japanese-Peruvian fusion) running through the mix. Sushi sets (including miso soup, kaiso salad and mochi cakes for dessert) are also worth noting. 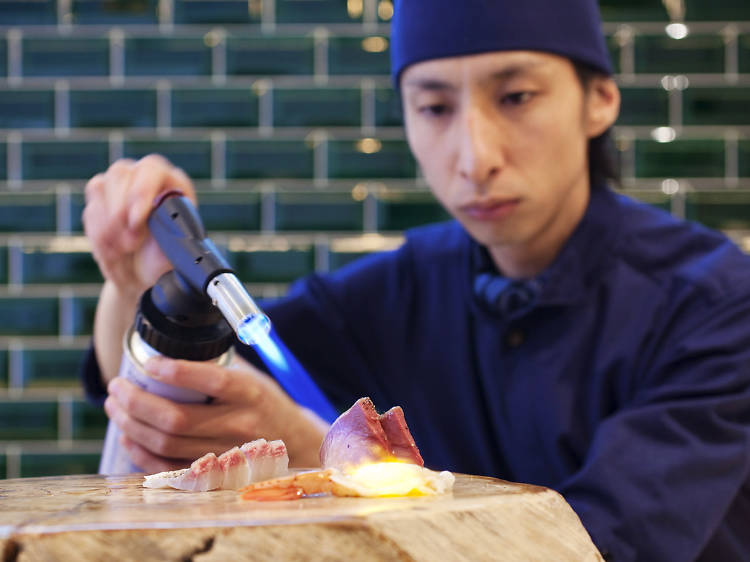 ‘Without soy – but if you want to’ says the neon sign displayed above the counter at this jewel of a sushi bar, where the chefs are dedicated to matching each piece of artfully crafted fish with an exquisite flavour pairing – perhaps a dab of tangy ume plum paste, a spoon of tosa jelly or a quick blast from the blowtorch (perfect for balancing the richness of fatty tuna). Sit at the ground-floor counter for the best service. 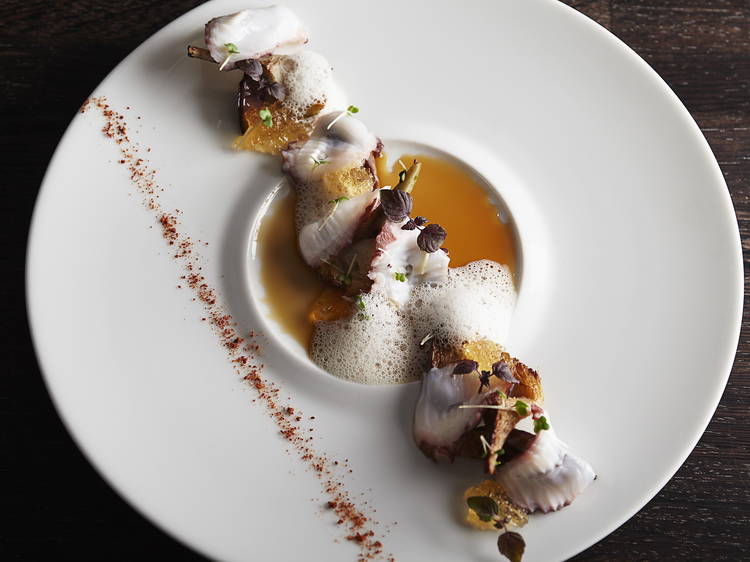 Nose-to-tail (or should that be cheek-to-fin) is the ethos at this South Ken offshoot of Yashi Sushi Bar, where an eat everything approach keeps punters on their toes. Cleverly crafted sushi rolls (with or without soy) are one of the highlights – everything from eel and avocado to foie gras and chives. 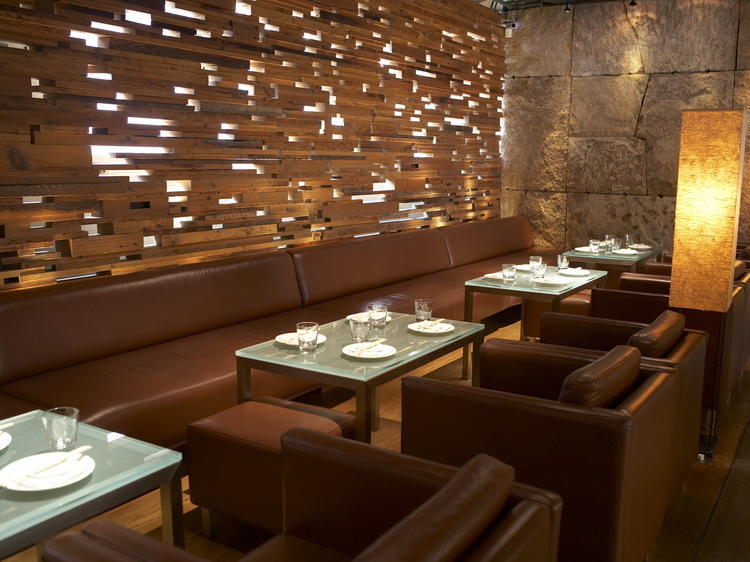 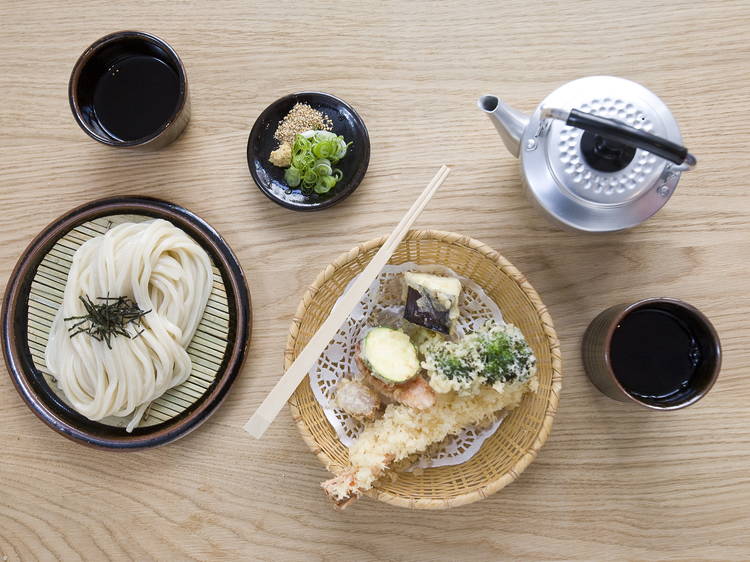 Whether you’re looking for shrines to sushi or a full-blown kaiseki experience, you’ll find it all at London’s top restaurants serving Japanese cuisine