A local's guide to Footscray

Find restaurants, cafés, bars, shops and events in Footscray with this local's guide to the westside suburb

When they came up with the phrase ‘west is best’, they must have been thinking about Footscray. This inner-city suburb is the brightest jewel of Melbourne’s west, primarily thanks to the migrant communities that have come to call Footscray home. A melting pot (or wok pan) of cultures spanning from Vietnam to Ethiopia have given the suburb touches of their home countries, which means you can scoop up a goat curry with fresh injera, slurp up pho and hunt down the best cannoli in town all in the same street.

Footscray is located only six kilometres from the CBD, right beside the Maribyrnong River. It’s lined with a few main shopping and eating drags – the main one is Barkly Street, close to where you’ll find the large mural of Franco Cozzo (patron saint... err… famous furniture salesman of Footscray) welcoming you with open arms and a cheery “grand sale! Grand sale!” The migrant communities that call Footscray home are why the suburb is one of Melbourne’s most thriving and exciting – especially if you’re into food.

When Footscray was voted the coolest neighbourhood in Melbourne in 2019, one Time Out reader put it best: “It’s multicultural, has great bars and food, and it’s cheap(er) and has fewer annoying wanker bros than other parts of the city.”

We asked the staff at Footscray Community Arts Centre for their top picks of Footscray, so look out for them in the below sections.

How do I get to Footscray?

The suburb is well served by train – Footscray station is planted right in the thick of things. Otherwise, you can go further west towards Middle Footscray and West Footscray stations. The 82 tram also runs toward Barkly Street via Gordon Street.

Seddon and Yarraville are further south, and Ascot Vale and Kensington are to the northeast. Maidstone and Highpoint Shopping Centre are close by as well.

Grab a banh mi from Nhu Lan and a cannoli from T Cavallaro & Sons and hop down to the sloping patch of grass near Footscray Community Arts Centre to enjoy the sunset. It’s one of the best views of the CBD skyline in all of Melbourne.

Best things to do in Footscray 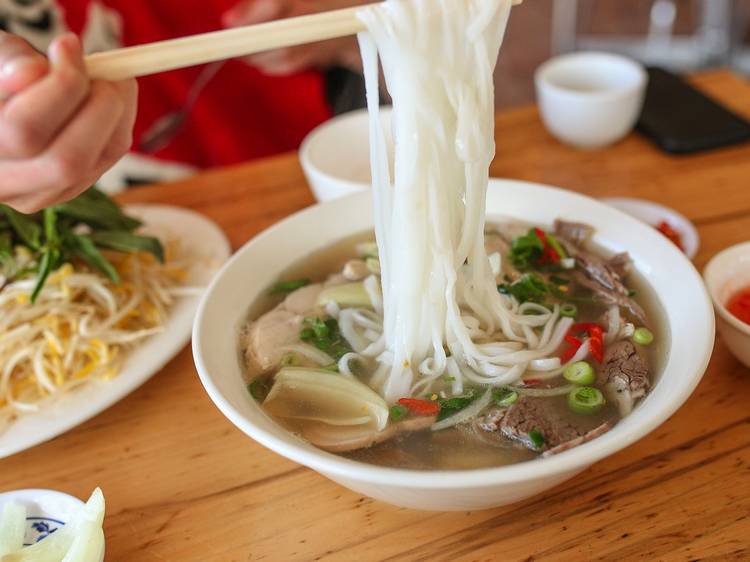 Arguably one of Melbourne’s finest banh mis can be found at Nhu Lan Bakery. Baguettes are baked on-site daily, resulting in an impossibly crusty exterior (that will inevitably end up in shattered pieces all over your shirt) and a soft internal cushion for house-made butter, pâté, head cheese, tomato-braised meatballs, lemongrass pork, and even tofu, loaded with properly pickled carrot, batons of cucumber, coriander, a dash of Maggi seasoning and fiery, home-grown chillies. Bernadette Fitzgerald, program manager at FCAC, says it’s the best banh mi in the business.

Tan Thanh Loi has a menu as long as an encyclopedia, but regulars know to skip the hu tieu, duck noodle soup and stir-fried dishes, in favour of the easy-to-eat but hard-to-master com tam (broken rice). Here, lemongrass marinated pork chops and chicken marylands are grilled and sliced before crowning a mound of broken rice accompanied by pickles, shredded pork skin, meatloaf and fresh slices of cucumber and tomato, served alongside a piquant bowl of nuoc mam cham sauce, which ties together every element of this generous plate of rice.

One of the most popular Ethiopian restaurants in the area, Ras Dashen (247 Barkly St) is the top pick from Vyshnavee Wijekumar, marketing manager at FCAC. It specialises in “delicious authentic food with a down-to-earth community vibe".

Vietnamese food is the most popular cuisine found in Footscray, but the Chinese influence is not to be overlooked. Roti Road is run by a Malaysian-Chinese family who love to insert a bit of theatrics to the dining experience. Waiters will toss, spin and throw tissue-thin sheets of roti around the room before running back into the kitchen to cook it for you. Each serving of roti canai comes with sambal, curry sauce and dahl, with prices starting at $6.90.

Pho Tam (Shop 1, 7-9 Leeds St) isn't the most modern restaurant in Footscray, with its wear and tear unashamedly on display. But that just means it is one of the most loved Vietnamese joints in the suburb. Pho is the typical fast-food choice here, with beef and chicken broths built on a mix of sweet spices and adorned with your choice of sliced or poached meats, herbs and aromatics, but it is by no means the only dish that it produces well.

Pie Thief is a tiny shop by co-owners Aaron Donato and chef Scott Bloomfield (ex-Supernormal) that sells, well, pies (and a couple of damn fine sausage rolls). Expect standard offerings of steak and cheese, or bacon and egg pies, but as weird as it sounds, it's the out-of-the-box lasagne pie that draws in the crowds. Adrienne Baldwin, finance manager at FCAC, also says there are great vegan options. 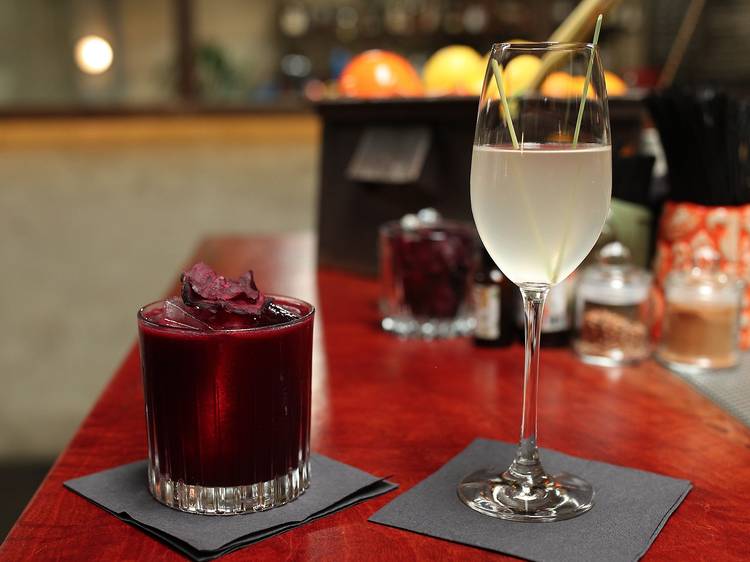 Slice Girls and Back Alley Sally’s (4 Yewers St) are where you want to be on a Friday night for drinks and pizza.

Part bar, part bottleshop Mr West (106 Nicholson St) has been a Footscray fave since it popped up in 2017. In lockdown, the team won a Time In Award for its takeaway booze offering, which includes 1.5L bags of Espresso Martini.

Hop Nation (6/107-109 Whitehall St) is an independently owned brewery by former winemakers Sam Harbour and Duncan Gibson. They have no shortage of barrel-aged brews in the works – a call back to their winemaking background with their small-batch beers made using natural ingredients with no fining or pasteurisation and minimal filtration. You can order online, too.

Ben Beare, FCAC’s production design coordinator, says French Baguette Café (177 Barkly St) is “one of the most underrated pot or pint people-watching spots”. There’s a huge, diverse menu, plus “the vibes of the location are what it’s all about – and you can eat and drink kerbside during summer”. 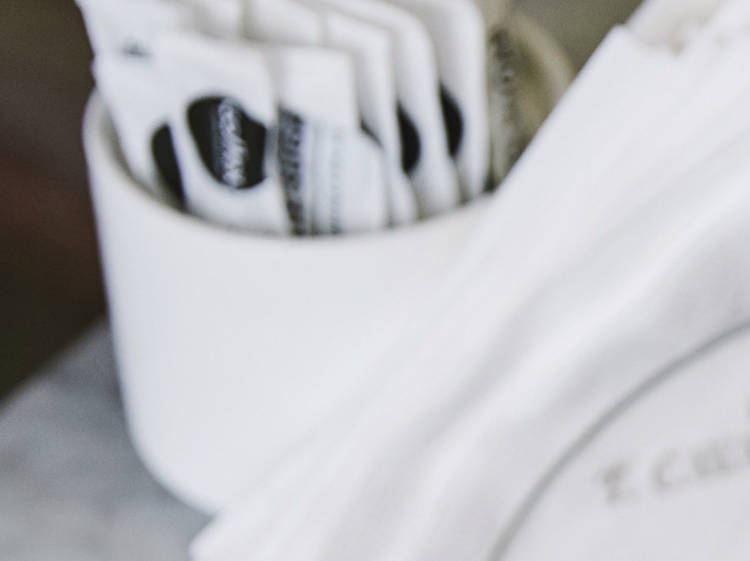 On the Irving Street strip, you'll find Konjo Café (89 Irving St) serving up large platters of pulse-based curries on large plates of spongy, soured injera. Split peas, red lentils, green lentils, cabbage and beetroot are cooked down individually with spices and are scooped up onto a platter of Ethiopia's traditional bread for a mere $14. But it’s the coffee you really need to try, according to Bernadette from FCAC. It’s served traditionally out of a clay pot and poured at the table to accompany the rib-sticking meal.

It’s always busy, but according to Urvi Majumdar, creative workshops producer at FCAC, the coffee at Footscray Milking Station (35 Bunbury St) is tops. It’s “busy, but efficient – and it’s a lovely place for brunch too,” says Majumdar.

Cheralyn from FCAC says that some of the best Vietnamese coffee can be found at Scarlet Corner (157/81 Hopkins St) in Footscray Market. 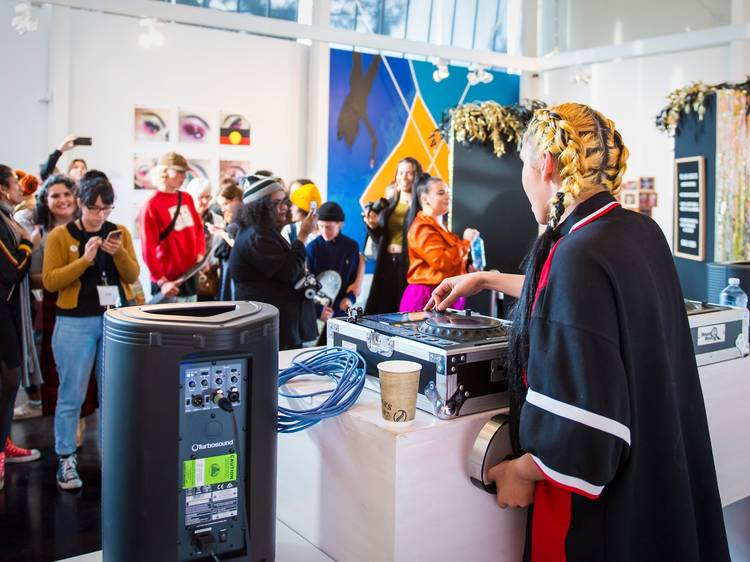 Footscray Community Arts Centre (45 Moreland St) has well and truly earned its stripes as an institution – not just in Footscray, but Melbourne-wide. It caters to everyone, from the curious to the established artist, and has a day program for people with disabilities to get involved in artistic experiences. The centre is a perpetual buzz of activity – there are often exhibitions dedicated to West Melbourne, where you can view the area through the eyes of artists that call Footscray home, as well as exhibitions curated from the broader global community.

Laze about on the FCAC lawn and check out those primo city views, then take a walk north along the Maribyrnong River, which passes by lots of parklands, the port and the Quang Minh Buddist Temple.

Another great place to hang out in Footscray is Maddern Square (2 Chambers St). Vy from FCAC says it’s a great quiet spot with cool public art – and it’s within walking distance of all the eateries. 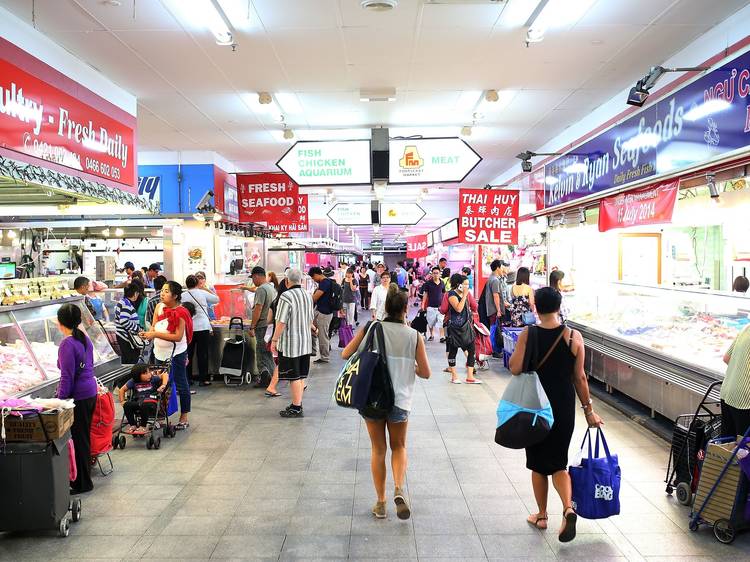 In the centre of Footscray lies cavernous fresh food market Footscray Market (18 Irving St). You’ll have to have your wits about you when you’re picking out your sawtooth coriander or fresh globe artichokes because if you’re dawdling, you will most likely be run over by an old woman and her trolley stocked with fish heads. The meat hall is packed with goat, calves’ feet, livers, tripe and stock bones, while the seafood hall is a riotous fight over South Australian scallops still in the shell, blood cockles from Darwin, live fish and sea urchins.

T Cavallaro & Sons (98 Hopkins St) is a 63-year-old pasticceria that proudly claims to make the best cannoli in Melbourne. Crisp, fried shells are displayed in the window and filled to order with pastry cream or ricotta so each cannolo avoids being moisture logged. Be warned, you will get mowed over on the weekends by families picking up their cannoli towers built specially for birthdays, christenings or any celebration that requires a cannoli tower.

Bernadette from FCAC recommends Harry and Larry’s General Store (4 Yewers St), which is full of artisan goodies like cheese, pasta, bread, sauces, beer and more. They also do delivery.

Wholesale vegetarian food supplier Vincent Vegetarian Food (353 Barkly St) is also a must-visit. Cheralyn from FCAC recommends it for the groceries, but also the plant-based alternatives to popular Asian dishes and mock meat.

Mesnoy Injera Bakery (77 Irving Pl) is Melbourne's first Ethiopian grocery store. Not only does it stock a wide range of spices, pre-made curries and dry goods, but Mesnoy also makes injera – the fermented, spongy bread synonymous with Ethiopian cuisine – with teff, wheat and sorghum every day. Packets of these platter-sized breads sit behind the counter; just request them from Karim Degal and his mother, Meftuha Osmen, who run this community-driven grocery store. 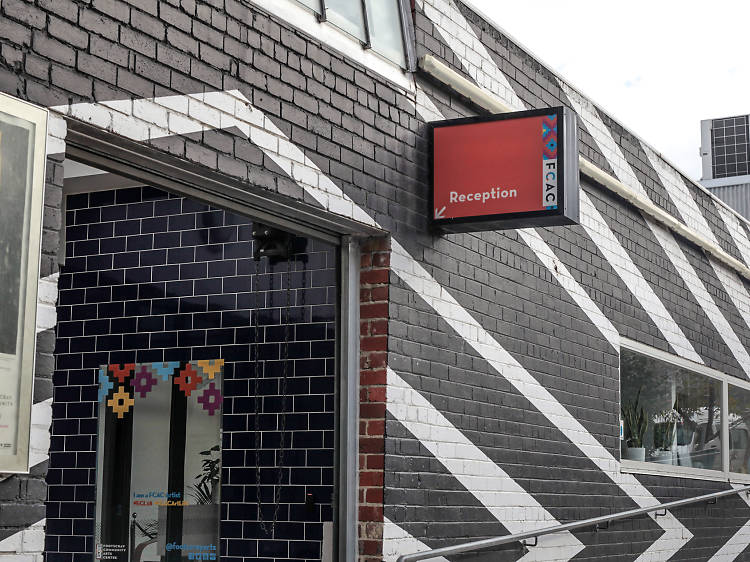 From the FCAC team: “To get over the [lockdown] blues, FCAC will be presenting a packed summer program with a vibrant offering featuring live music, markets, food experiences, participatory art experiences for kids and families, outdoor and indoor exhibitions, comedy nights and film.” 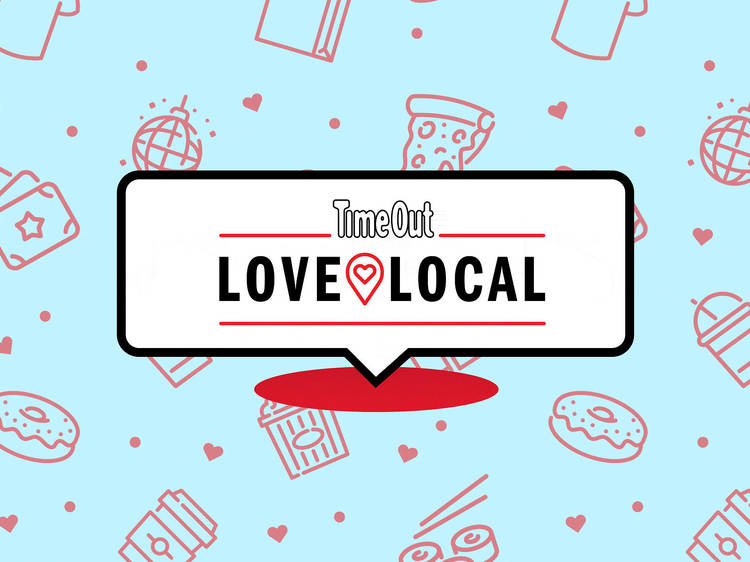