The 19 best speakeasy-inspired bars in NYC

Although 2022 has wrought quite the resurgence, the last of New York City’s real-deal speakeasies ceased operation in 1933. That’s the year prohibition ended, and once that odd bit of wise legislation managed to pass, in spite of hidden entrances, decoys, and hooch-obscuring levers and pulleys, wowie-zowie, all those gin joints turned into bars!

Some of those bars, like 21 Club, remained open in various forms for many more years. Any place popping up in the interim is simply speakeasy-inspired. These newcomers aim to approximate Jazz Age style absent its inconvenient trappings. See, just like we wouldn’t take a suborbital flight and call it space travel, we can’t really say we fully comprehend the sights, smells, tastes and heartbeat of erstwhile speakeasies.

But we do go to a lot of bars, and plenty of those are rather convincingly fashioned after speakeasies, but with better booze (fewer errant pest particles), improved air quality (no smoking), and modern conveniences like online reservation platforms, air conditioning and mobile payments to follow up with the moochers in the group. Some have circa (19)20s details for days and others would make a dramaturg’s stomach turn, but their semi-hidden entrances, Old New York decor and appearance of exclusivity are almost enough to make us feel like we’re about to light up a Chesterfield, sip some cold clear liquor and–what?–oh, we’ll Venmo you later. 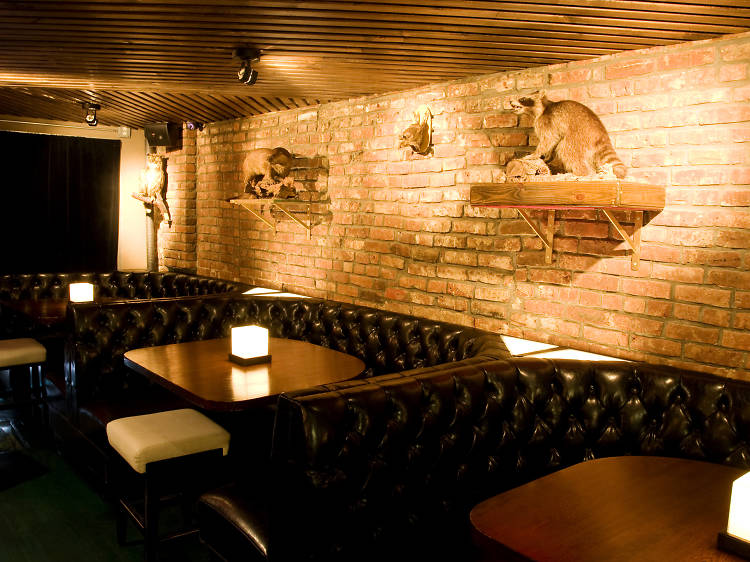 Ironically famed the world over for its concealed location down a few stairs, inside a hotdog shop and through a telephone booth, PDT is a genre classic that first opened in 2007 ahead of NYC’s last speakeasy-style bar revival. Although, as proprietor Jeff Bell pointed out in a recent phone call, many newly minted drinkers may have never actually used a telephone booth, all the bells and whistles are a reminder of a time when this city really committed to a bit. It's also cozy and comfortable as a rich guy’s hunting lodge, and the drinks best in class, so prepare to wait for entry. Most nights, it seems like a job for Superman. 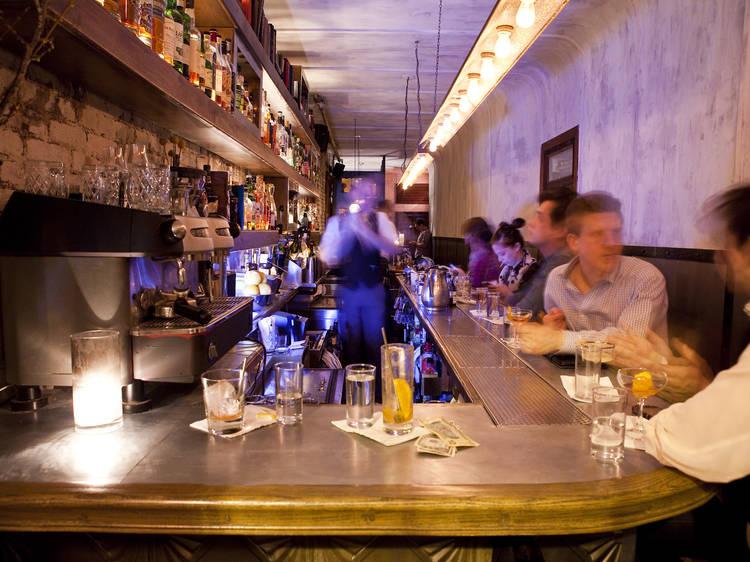 Occupying the former Milk and Honey space (which opened on New Years Eve in 1999), there’s now a whole generation of drinkers who could be forgiven for thinking Attaboy has been here forever. Its narrow interior, anchored by a brushed steel bar, is chicly worn, and plenty of old-timey tipples are available. Some still say it’s a little hard to find, so here’s a tip: The address is 134 Eldridge Street, and it reads “AB” on the door. 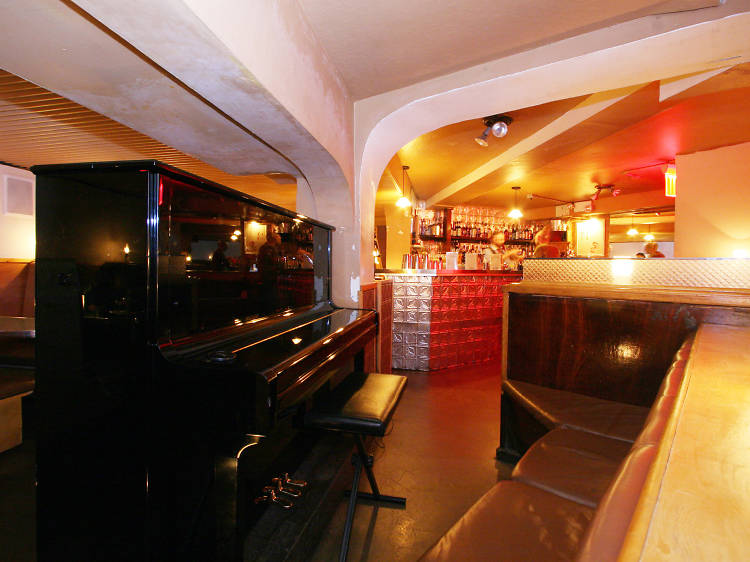 The late ​​Sasha Petraske’s imprint is all over NYC cocktail culture, and particularly deep in the speakeasy bracket. Attaboy ancestor Milk and Honey, Time Out New York Best of the City award winner Dutch Kills and Little Branch are among his most famed operations. Little Branch first opened beyond a barely there, nondescript (except for the line that often forms outside!) doorway and down a staircase in 2005, and it’s still got top-notch classic and bespoke drinks today. 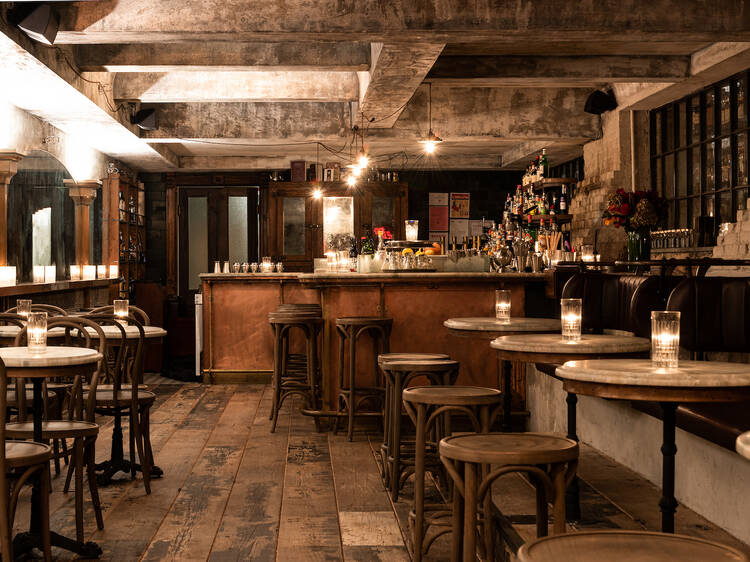 This is the best of all those self-described speakeasies that have opened in recent months. Its Cortlandt Alley address is genuinely hard to find the first time you try, you must buzz for entry and even then it’s still a few levels below ground. Downstairs, it feels like a private lair with the pulse-quickening promise of intrigue. And, like any proper hideout, it’s almost impossible to get in, but the recent addition of reservations makes planning a little easier, at least. 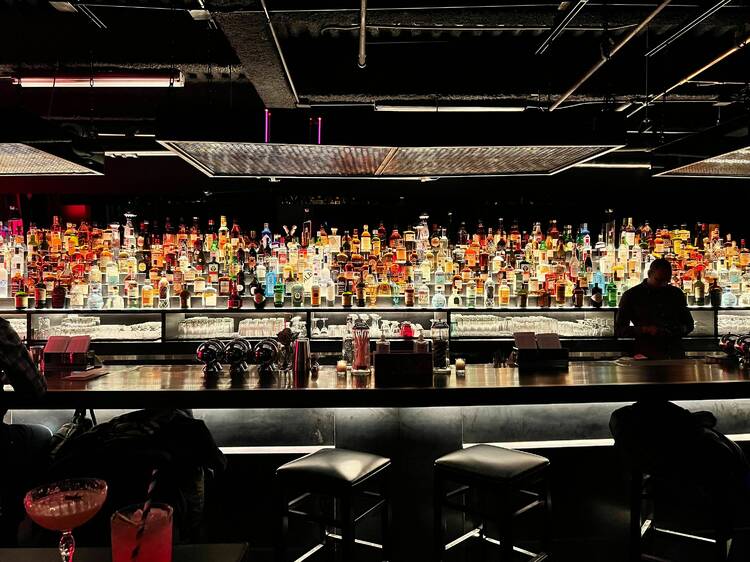 Only incidentally one of NYC’s latest speakeasy concepts, Nothing Really Matters aims only to be “the best cocktail bar in the universe,” rather than a late-arriving throwback. But it still fits the bill better than many of its contemporaries by virtue of its recessed entrance in a midtown subway station alone. Find your way downtown-bound to see whether the style tracks. 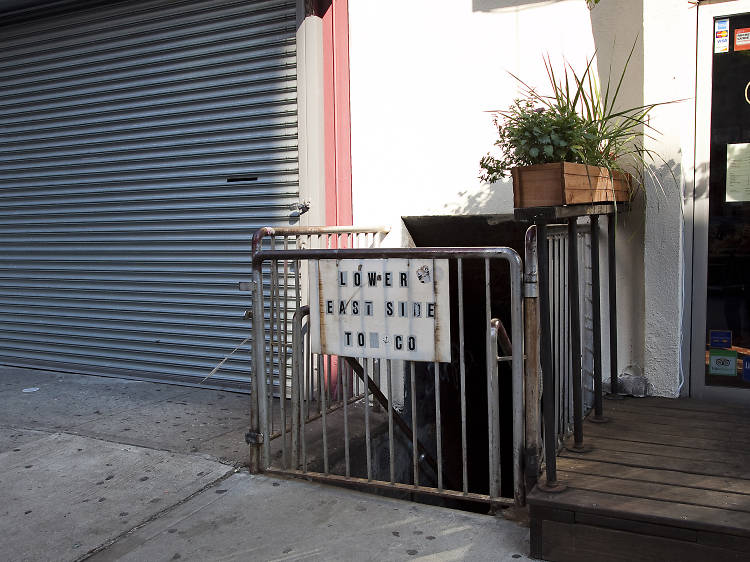 In theory, you and a companion–yet to be determined friend or foe–will turn up Norfolk street just as a cloud of steam rises from a subway grate, and your eyes will land on a sign: THE LOWER EAST SIDE TOY COMPANY. This must be the place, you’ll say, pulling your trench coat tighter, no longer sure whether you’re nervous or excited, or if this is really the place at all. In practice, there will probably already be people milling around outside The Back Room, and you may have to wait for your cocktail-in-a-teacup, but the environs are just transportive enough to make it seem, for a minute, like you’re back in the original roaring 20s. 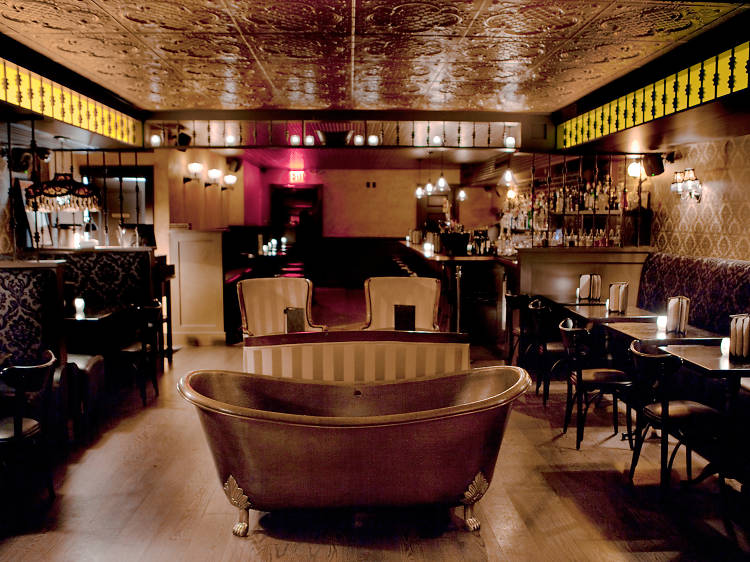 If you’re really thirsty for the whole hide-and-seek conceit, or simply tolerating someone who is, this is the place to be. Up front, it’s a functional coffee shop. In the back after dark, it’s Jazz Age cosplay, baby. Not that most people come wearing costumes, but they certainly could and blend right in with the copper bathtub in the center of the room. Go ahead: Take a little social media dip. 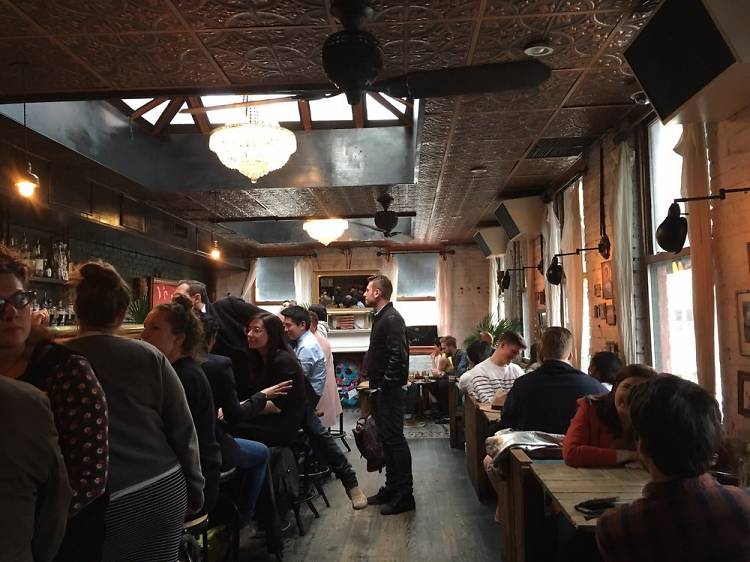 This one ranks high on the calculated seclusion spectrum, too. Situated above a Five Guys, the path up a back staircase leading to tin ceilings, banquet hall-esque chandeliers and cozy tufted booths is pretty neat if you just sort of happen upon it, so grab a pal prone to whimsy and try to orchestrate that very experience without mentioning the place is already all over Yelp, Instagram, and TikTok. 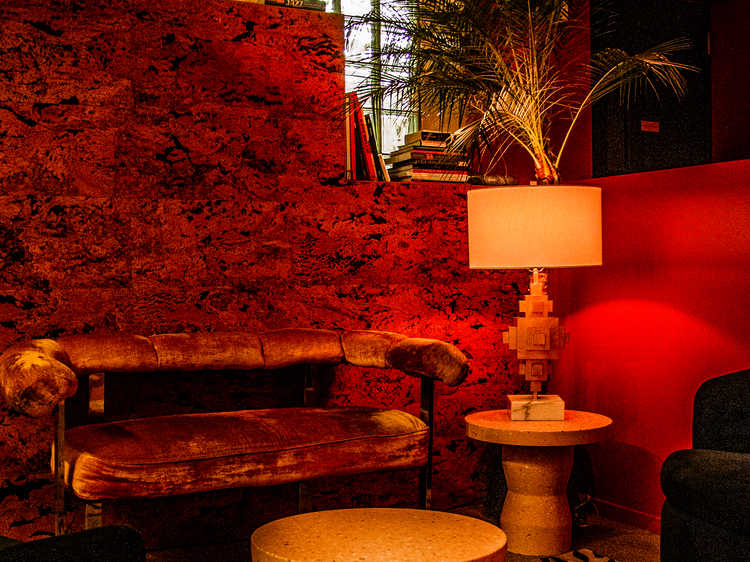 La Noxe is, like a lot of spots, literally underground. Like fewer, with the sole exception of Nothing Really Matters, its unexpected location just off the 1 train in the 28th Street subway station gives it an edge. It has more of an element of surprise than most of its peers, better capturing that slightly clandestine quality other venues in this category aspire to. Take a date here for boudoir decor and the quickest possible exit. 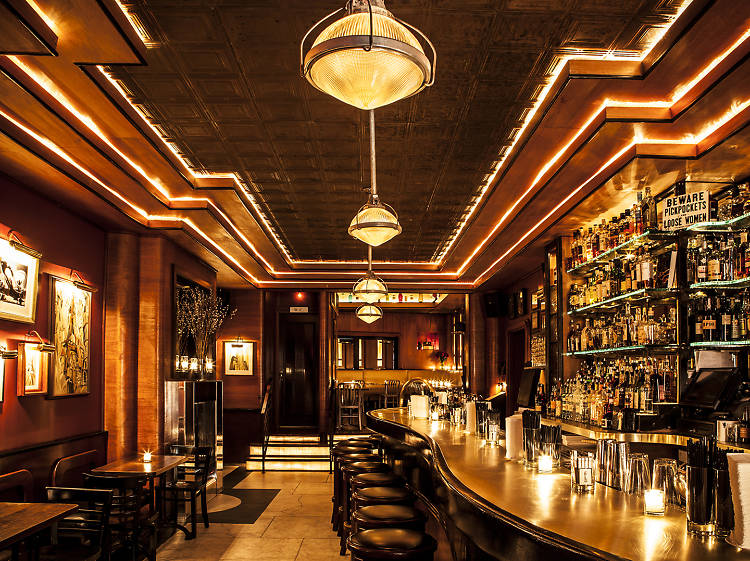 Another one of the earlier entrants to NYC's last speakeasy boom, Employees Only was built by industry pros in 2004. The lovely illuminated Art Deco lines and excellent cocktails have enabled it to endure and even grow in popularity for nearly two decades. The multi-award-winning bar also has a dinner menu and a handsome dining room. 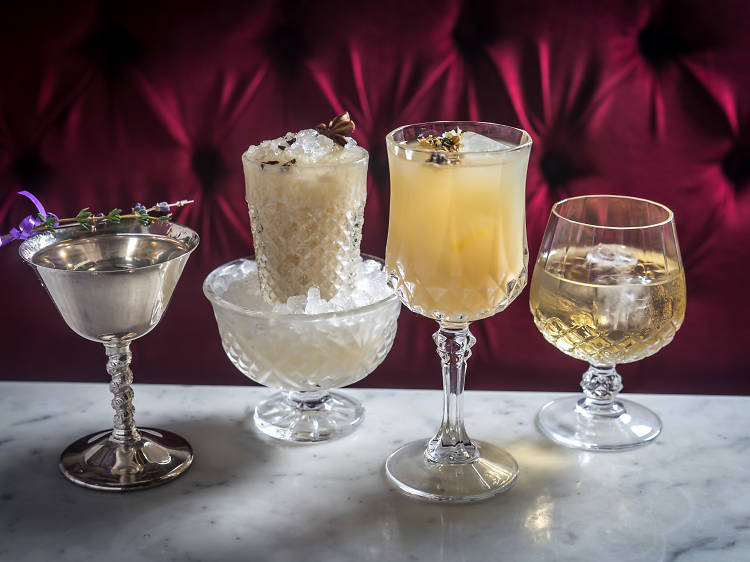 Presently open only on Friday and Saturday nights, Le Boudoir’s status as occasionally operational gets it closer to speakeasies of yore than any other, no matter how many twists, turns and fakeouts its peers employ. But of course, it does have one of its own: See if you can’t spot the entrance upstairs at sister restaurant Chez Moi. 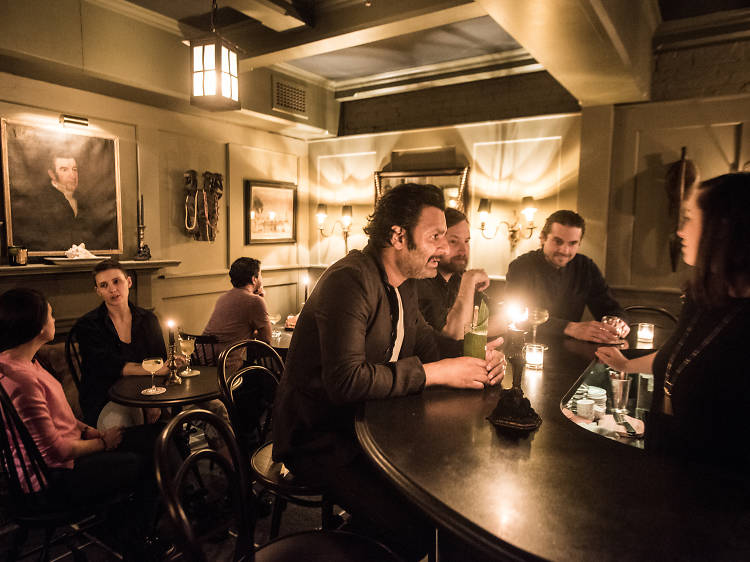 To explore Antarctica, Sir Ernest Shackleton had to navigate the frozen seas after his ship was trapped and eventually crushed by nature's translucent killer/cocktail cooler: Ice. To get to Banzarbar, which is inspired by those 20th-century expeditions, you must take the MTA. Six of one, half dozen of the other. The olive-green paneling, seafaring paintings and candlelight in the intimate space above Freemans restaurant amount to a nautical adventure on land. 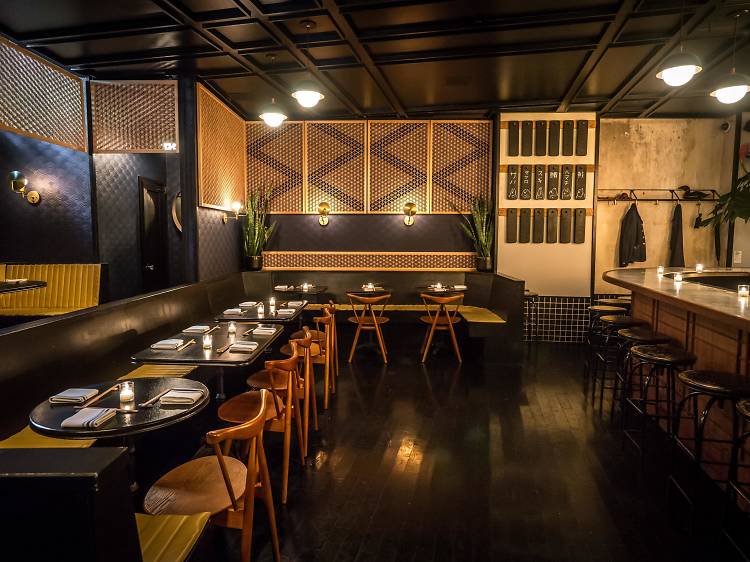 The Japanese restaurant and cocktail in the back of Walter’s recently reopened with a few new menu items and its familiar enduring style. Pass through the restaurant to reach the intimate, low-lit space and pair your old-timey imbibing with menu items like oysters, sashimi and karaage. 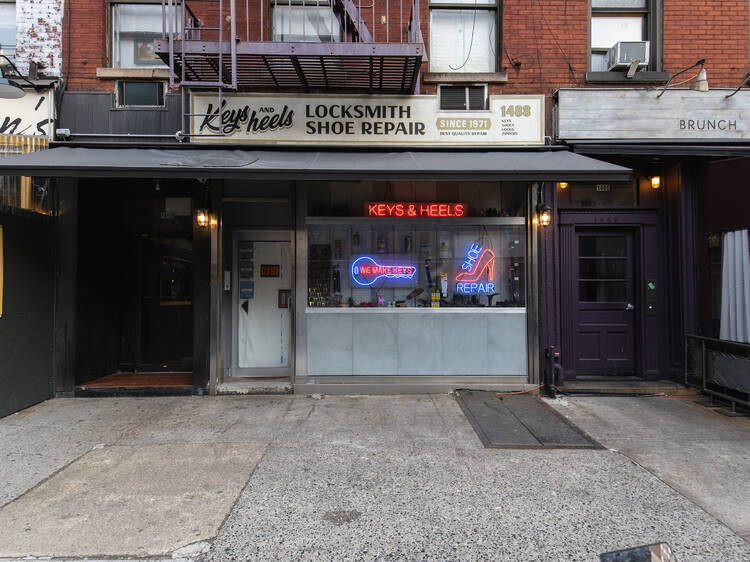 Like Bathtub Gin before it, Keys & Heels digs into the biz-within-a-biz motif. This time, the bar’s behind the facade of an old fashioned key-cutting shoe repair shop. But before you decide to split the rent with your date and scuff your stiletto in a dash out the door to start your new life of romance, remember that the entrance is but a decoy. Only the drinks and snacks in the back are the real deal.

The space beneath Chinese Tuxedo makes this a singular destination for a full, fun, photogenic night out, all at one address. Dine updoors before you slink down for terrific cocktails and pretty floral 'gram-ops illuminated by neon lights. 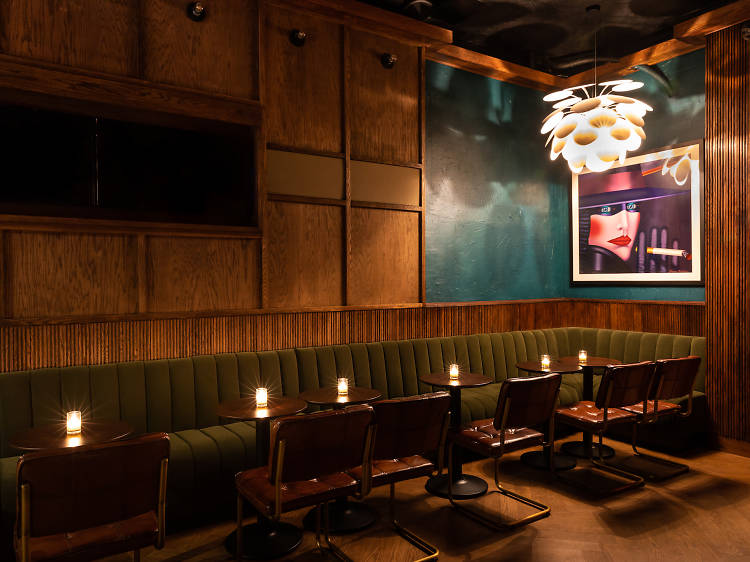 Mingling sports bar and speakeasy themes is incredibly clever, and J. Bespoke is the only game in town successfully executing both at once. Here, you’ll view games from velvet banquettes and sip seamlessly between $18 cocktails and $7 draft beers. 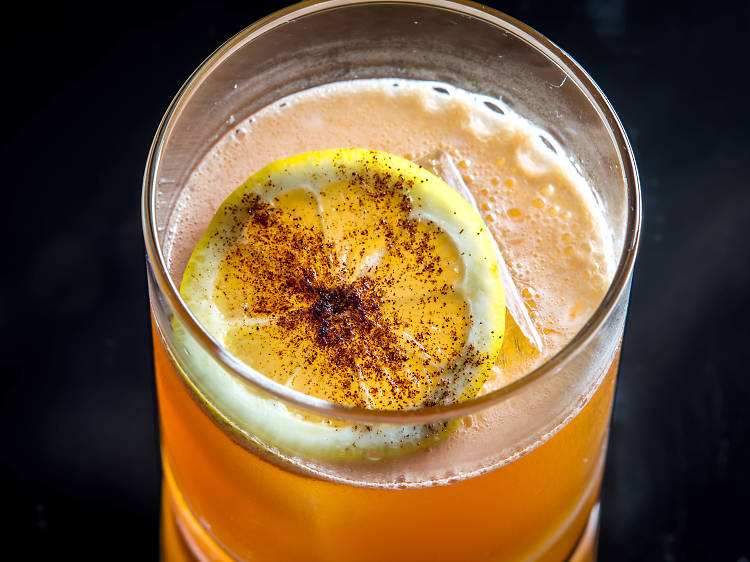 Dear Irving is practically hidden in plain sight, with double doors that could pass as the entrance to some tech millionaire’s pied-à-terre. It also has a bit of moneyed eccentricity inside, divided into period themes skewing vaguely Victorain in one spot, a little Mad Men-esque in the next. Pick your period and sip drinks that’d be just as tasty in any era. 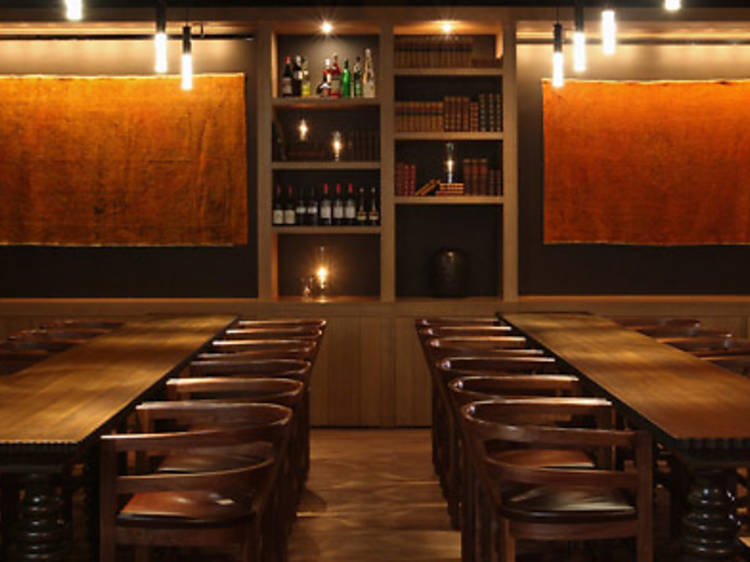 The Bar Downstairs & Kitchen at the Andaz Hotel follows the expected modern-day speakeasy format, down a staircase and through an unmarked door. But, once you pass through its discreet entrance there’s a surprise inside: tons of space! Unlike many of its bite-sized contemporaries, this subterranean spot has a long bar and rows of tables where you can imbibe with all of your secret sipping friends.

Similar to Bathtub Gin, UES. has an ice cream shop front, but when you ask whether they have this or that in the back, you get an intoxicating surprise. And it’s alcohol! Make like a soda jerk and pass the frozen treats for Upper East Side-themed cocktails like the 1040 Fifth Avenue and Here’s Looking at You, Bradshaw, in what is colloquially known as UES.’s “storage room.” 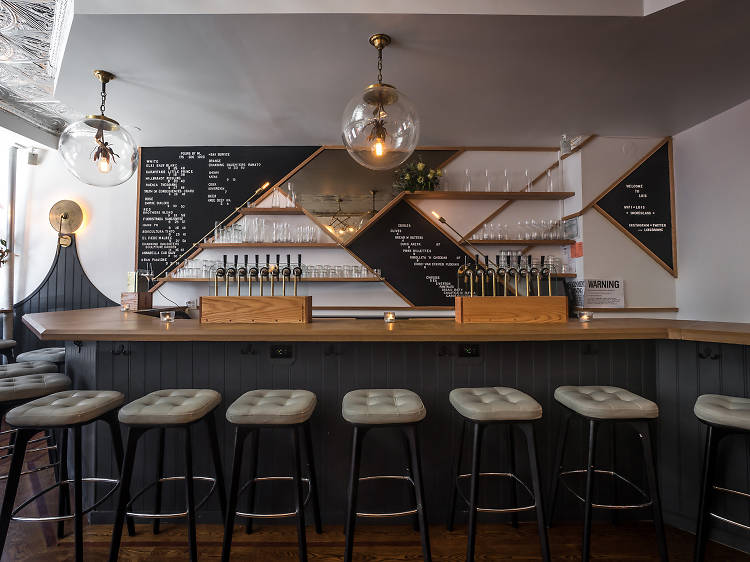 Check out the 18 best wine bars in NYC

From educational vin studios to natural-wine–focused neo-bistros, find the best wine bar NYC has to offer