Where to eat on Lunar New Year in Sydney in 2021

Start the Year of the Ox off right by feasting on seafood, dumplings and lucky desserts

No Lunar New Year celebration is complete without a feast, and there are many auspicious and symbolic dishes that are a must on any holiday menu: noodles for longevity, whole fish for prosperity, rice cakes for advancement to new heights, and more.

Beyond invoking luck and fortune, Lunar New Year fare is also damn delicious. In Sydney, eateries all over the city are offering specials and discounts, so your LNY banquet needn't break the bank. We've combed through these deals to select the finest on offer, so it's the perfect time to gather your friends and family together for a festive feed.

In the upscale dining room at Aria you can enjoy a six- or eight-course tasting menu for $220 or $290 respectively to ring in the Lunar New Year. Both menus showcase local ingredients – such as Paspaley Pearl meat, local abalone, and Maremma duck from Tathra – to match the restaurant’s top-shelf view of the Opera House. Matched wine is available for each menu, as are non-aloholic drink pairings.

Feast like an emperor at the CBD outpost of New Shanghai, which is offering an eight-course banquet menu for $48 per person (minimum four people). Enjoy favourites like sweet and sour barramundi, 'boundless energy prawns' with XO sauce and chicken san choy bau, alongside sweet treats like mango pudding. You better pace yourself to make it through all eight courses – eight is the luckiest number in Chinese numerology. The menu is available from February 12 to 21.

There’s lots going on at The Star over Lunar New Year, but the menu at Flying Fish is particularly noteworthy. As usual, the seafood-focused restaurant is combining Australian ingredients with East Asian flavours: think prawn, scallop and pork potstickers, Moreton Bay bug spring rolls, and the curiously named 'typhoon shelter-style salt and pepper cuttlefish'. The à la carte menu is available until February 28.

Another noteworthy feature of The Star? Restaurant Chuuka, with co-executive chefs Victor Liong and Chase Kojima at its helm. Liong's Chinese Malay roots have informed this year's special LNY dish: a yu sung salad, or prosperity salad ($68), which features green lip abalone alongside the zestiness of pomelo and green papaya and the sweetness of fresh mango. This is one you'll want to gather the gang for – each ingredient is presented individually on a platter, and everyone at the table tosses the salad together. It's designed to be shared, as is the prosperity and vigour it's intended to bring.

Speaking of two greats in the game teaming up, these two Sydney eateries are joining forces for an unexpected but mighty combo. Tokyo Lamington is rolling out three new lamingtons for Lunar New Year: one features pandan and pineapple, while the other is reminiscent of a pineapple tart, and the last is a savoury creation by Hello Auntie's head chef and owner, Cuong Nguyen, which sandwiches Vietnamese beef red curry katsu and cocoa butter between two savoury sponge pieces, and coats the whole thing in fried shallots and roasted coconut flakes. Grab yours from the pop-up cart in Darling Square (they're $7 for a single lammy and $21 for a pack of three).

Every dish in the nine-course banquet at Neil Perry’s Spice Temple has been named after a New Year wish. For $129 per person you can munch your way through peace (roast pork belly with hot, sweet and sour sauce), longevity (stir-fried spanner crab with leeks and mung bean noodles) and money (stir-fried Wagyu brisket with lucky money dumplings and baby eggplant). The Chinese New Year menu is available from February 10 to 20. You'll get a cheeky welcome cocktail, too.

Why settle for one when you could have two celebratory banquet menus? That seems to be the thinking at Lotus - The Galeries in the CBD, as well as sister outposts in the Chinese Garden of Friendship, the Gardens by Lotus, Lotus Double Bay, Lotus Barangaroo and Madame Shanghai in Darlinghurst. Set menus across the venues range from $78 to $168 per person and include dim sum platters, live lobsters, golden inglot puff pastry, whole steamed barramundi, and crispy duck pancakes. Menus are available between February 8 and February 14, depending on which Lotus you'll be visiting. One thing you're guaranteed at any Lotus around the city, though, is a lucky red envelope (as long as you spend cover $20, but that won't be hard) and of course, delicious food.

Buzzy Surry Hills spot Chin Chin is marking the occasion by keeping you wanting more – instead of a month of feasts like many other eateries in town, its Lunar New Year menu is limited to one night only on February 12. Dig into lobster fried rice, salt and pepper twice-cooked duck with pancakes, and beef and black bean noodles – all set to a disco soundtrack.

Vegan favourite Bodhi is upping the ante over Lunar New Year with its new menu offerings. For lunch dessert (yes, it's very much a thing), grab the 'coconut koi' with sweet coconut milk, water chestnut and agar agar. For dinner, the 'eight treasures salad bowl' is health and prosperity in a dish, packed with shredded beetroot, enoki mushrooms, spicy peanut sauce and a veritable rainbow of veggies.

If you like your view to be as impressive as your meal, Watsons Bay Boutique Hotel is ready to wow you with a spectacular combo of skylines and seafood. While you admire this venue’s unbeatable vantage on Sydney Harbour, you can have your fill of one of the most lavish seafood platters in town, featuring 12 different delicacies including mud and Alaskan crab, sea urchin, salmon roe from the Yarra Valley, scallop ceviche, honey bug sashimi, tuna tartare, scarlet prawns, scampi, kingfish, salmon and of course, Sydney rock oysters. This $450 banquet is perfect for sharing with family and friends. 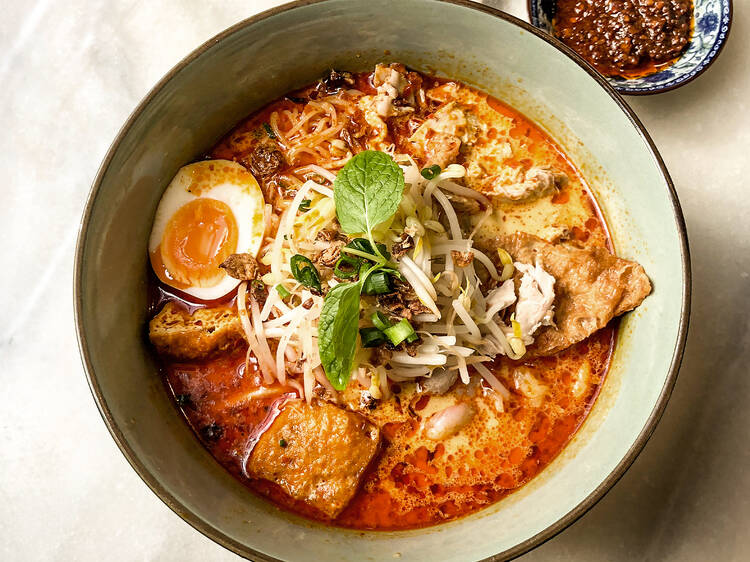 The best noodle soups in Sydney

Few things in life are more satisfying than hunkering down with a bowl of piping hot noodle soup.