Wear your sunblock: The best NYC events in June 2021 are things to do outside. When you’re not spending all your free time soaking up the sun at the best beaches or drinking atop the city’s finest rooftop bars, you'll be rocking your rainbow during the Pride March and catching Tribeca Film Festival screeners. There are more opportunities to play dress up too like at the annual Jazz Age Lawn Party on Governors Island. Get your tickets now for the best happenings of the month and keep your fingers (and toes) crossed for good weather. 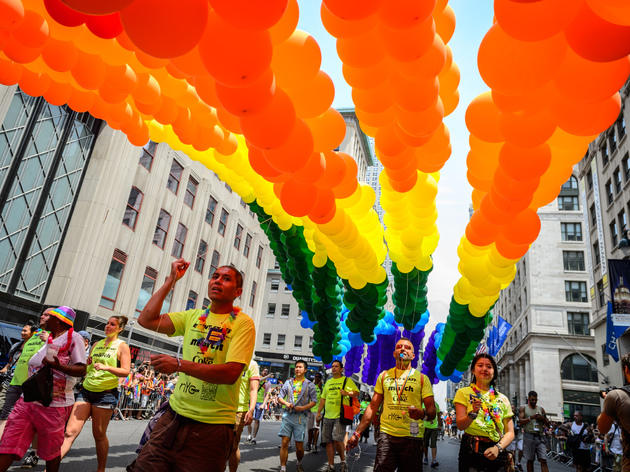 Whether you’re gay, lesbian, bisexual or transgender, it’s time to celebrate Gay Pride in NYC. Party at the Pride March, stand up at the Pride Rally, and get down at Pride Week at great events, including dances and parties. 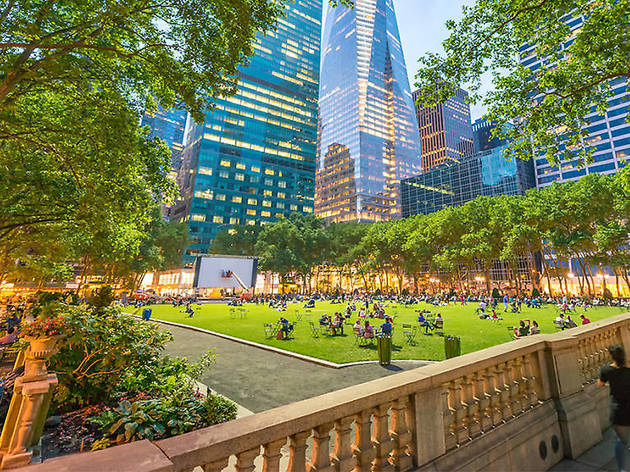 Broadway may still be dark for the summer, but just a few avenues down 42nd Street, live performances are returning in a big way to Bryant Park. With support from Bank of America, the park’s Picnic Performances will be bringing 25 live, in-person events to the park, many featuring performers from the city’s top arts institutions. (The events will also be available to live stream.) The 2021 season is set to kick off on June 9 with a four-night run of back-to-back shows by musicians from the New York Philharmonic and will close on September 20 with an event that will serve as a 100th-anniversary celebration for The Town Hall. Also planned this summer are concerts produced in partnership with Carnegie Hall, Jazz at Lincoln Center, New York City Opera, Classical Theatre of Harlem, Joe’s Pub, Paul Taylor Dance Company, Limón Dance Company, Elisa Monte Dance, National Sawdust, Harlem Stage with Jazzmobile and Historic Harlem Parks, Greenwich House Music School, New York Chinese Cultural Center, Music from the Sole, and more.

All of the outdoor concerts will be free and open to the public. The park will observe all current safety protocols for the event and also provide enough room for social distancing (audience registration will be required in advance.) 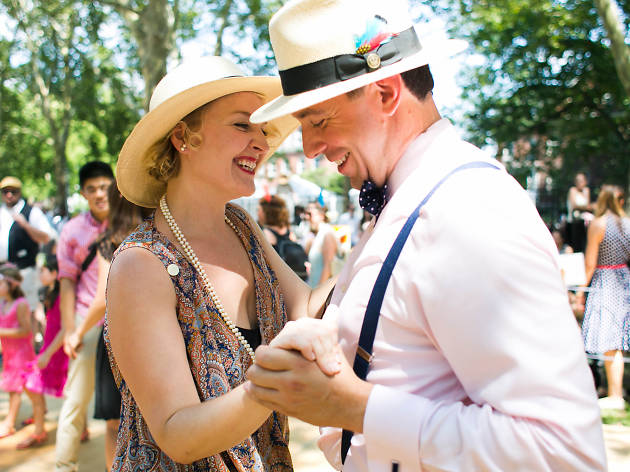 Jazz Age Lawn Party is an essential annual summer stop for revelers looking to dance in the open air and find great things to do outside. Governors Island is the perfect venue to leave the 21st century behind for the delights of the Prohibition-era (including “speakeasy” summer drinks). Dress the part with festive, period-appropriate attire, and come ready to dance at the Jazz Age Lawn Party. 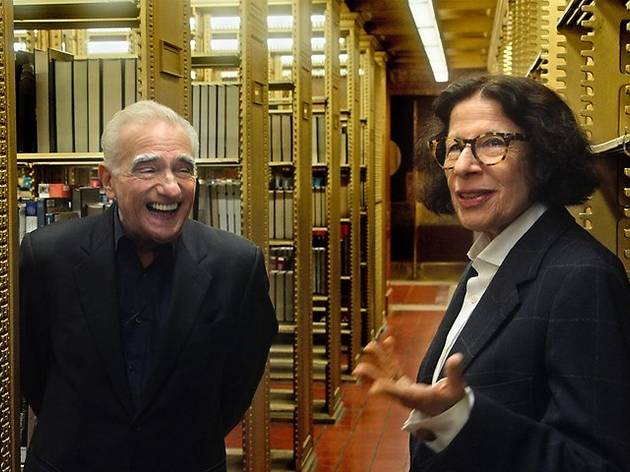 DOC NYC, America’s largest documentary festival, is launching a Spring Showcase—a four-week online festival featuring some of the year’s most talked-about nonfiction episodic series and films (Pretend It's a City, Billie Eilish: The World's A Little Blurry, and Framing Britney Spears among others), paired with exclusive conversations featuring the creative teams behind them. Special guests like Padma Lakshmi, Steve James, Fran Lebowitz, Dr. Orna Guralnik, Asif Kapadia and Louis Theroux will make appearances. “DOC NYC is excited to create a spring focal point to build upon our annual fall festival, now in its 12th year,” said the festival’s Executive Director Raphaela Neihausen. “We’re living through a period of rapid expansion of the documentary field, and we’re thrilled to offer a new opportunity to discover a diverse array of important nonfiction work. Over the last year, DOC NYC has expanded our professional and educational programming for filmmakers beyond the fall season, with great results. With Spring Showcase, we’re aiming to do the same for documentary-loving audiences as well.” The first Spring Showcase lineup spans a wide variety of nonfiction formats and subjects, from hosted series to biographies, vérité films and mult-part cultural explorations, covering everything from culinary history to city politics, pop music, and the inner workings of intimate relationships. 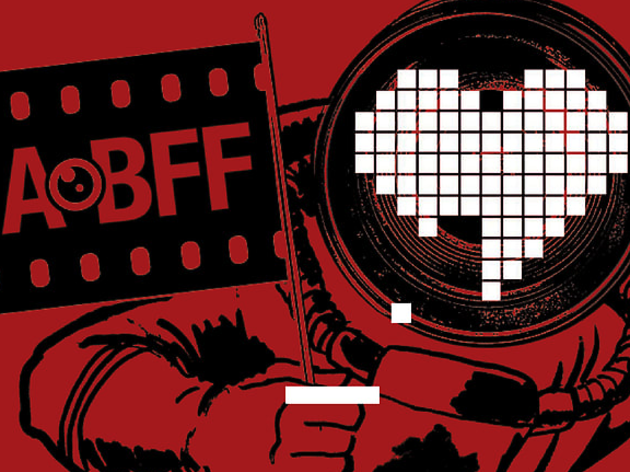 Seeking to promote Kings County’s cinematic indie cred, the 11th season of this showcase features dozens of independent filmmakers—both first-timers and Hollywood vets—who have lived and worked in the borough. The first evening opens with New York premiere of One Moment a heartwarming family comedy/drama starring Danny Aiello in his final performance and 53 more films to follow as well as panel talks and other events. Expect to see snippets of your favorite Brooklyn spots appear in these films. 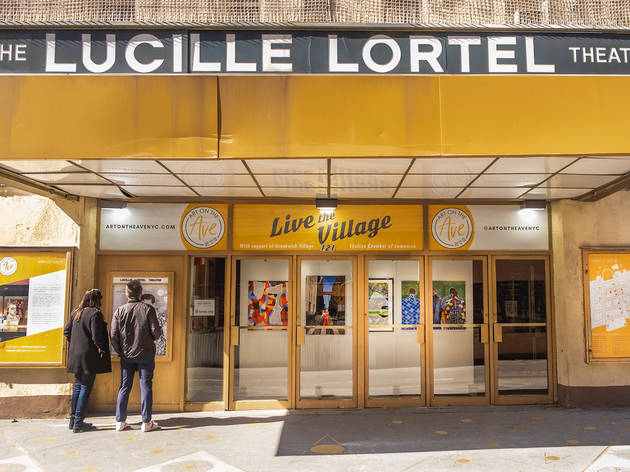 Take a "socially-distanced" gallery walk in the West Village by Art on the Avenue NYC this summer. The organization has placed work by under-represented New York artists in vacant storefronts for all to see at any time. Norma Krieger and Susan Davis Eley, curators for Art on the Ave, put out a call for work that spoke to the theme, "Awakening" (which is what most of NYC is doing right now). Of the more than 150 submissions received, the team agreed to show the work of 28 artists, who come from diverse backgrounds and perspectives. Each artist has recorded a one-minute audio clip, produced by MouthMedia Network, to accompany their art. It can be accessed through a QR code. 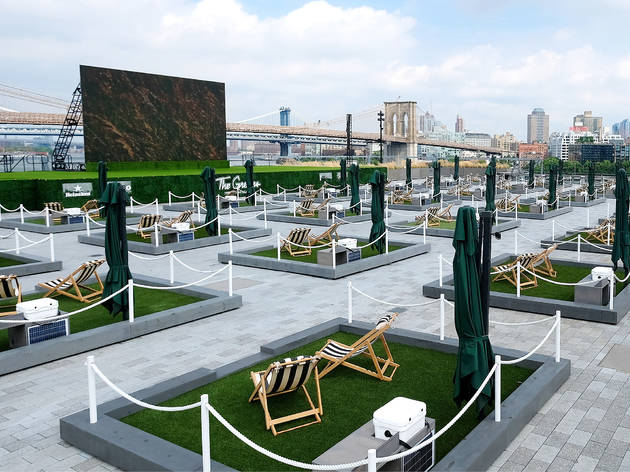 Photograph: Relevent on behalf of The Howard Hughes Corporation

Pier 17 is offering free fitness once again! On Tuesday and Thursday nights as well as Saturday mornings through September, get your body going with classes from Trooper Fitness, Pure Barre, HIIT The Deck, and Lyons Den Power Yoga. 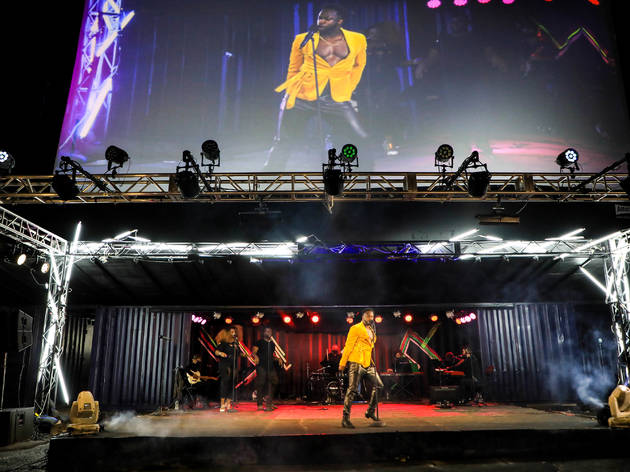 Spectators have the choice of watching the shows from their vehicles or from reserved picnic tables, outfitted with boom boxes for audio, that seat up to four people. Cinema-style beverages and snacks will be sold on-site, and safety protocols will be enforced. (These include temperature checks upon arrival, wristbands for social distancing and monitors on hand to ensure that everyone plays by the rules.)

Radial Park is located right next to the Astoria stop of the NYC ferry, and is a roughly 20-minute walk from the 30th Ave station of the N and R subway lines. 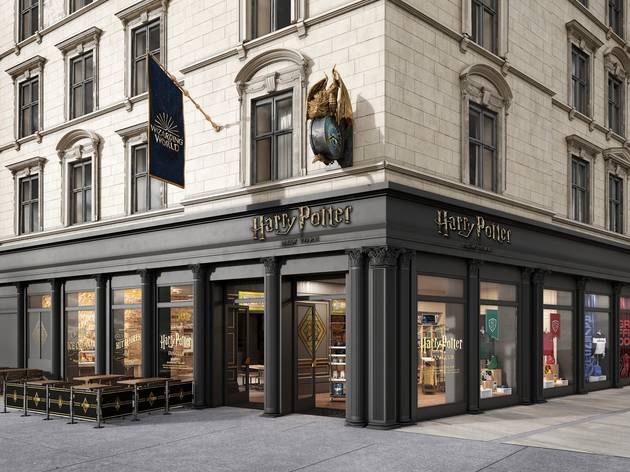 Get ready, New York, your acceptance letter to Hogwarts is here—the most magical place in New York City, the Harry Potter Store New York, has opened on June 3. Wizards and witches will be able to shop from the world's largest collection of Harry Potter merch across 21,000 square feet at 935 Broadway in the Flatiron District at this highly-anticipated store. We've been waiting for a year to walk through these magical doors and on Friday, we were finally able to check it out. 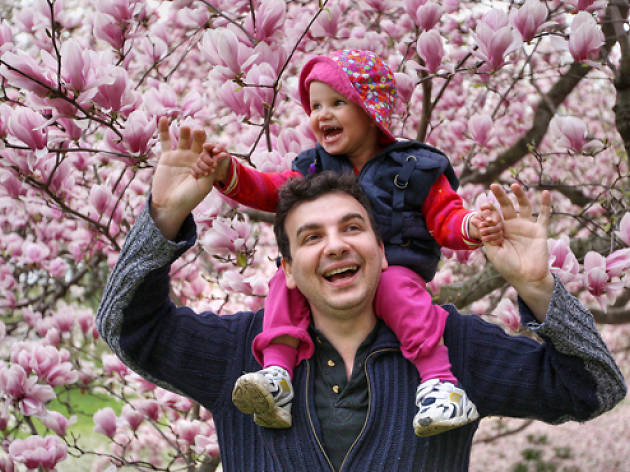 Give pop a hug and laugh at his corny jokes: It’s Father’s Day! Find parent-friendly attractions, from baseball to barbershops, and ideas for things to do. Plus, forget the old boxers-and-socks routine and discover where to get great gifts for Dad. 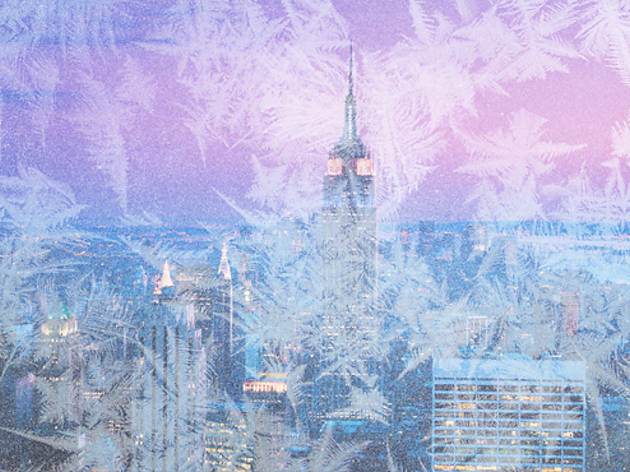 Resist the urge to hibernate for the next three months—we’ll help you fill your calendar with an array of winter activities the season’s best cultural activities, museum exhibits, food festivals, concerts, Christmas shows and more. 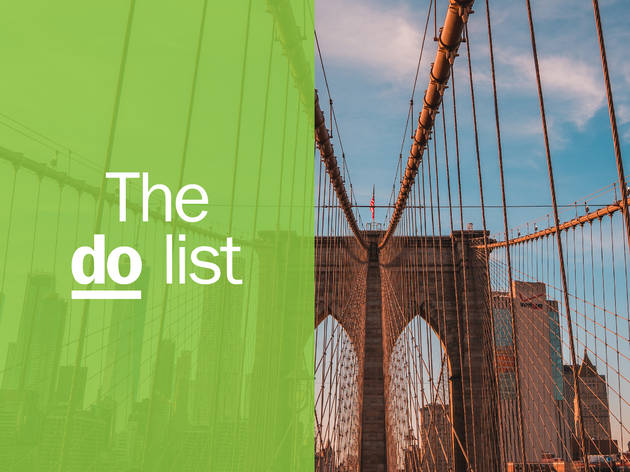 From its art museums (The Met and MoMA) to its attractions New York City is the best city in the world. 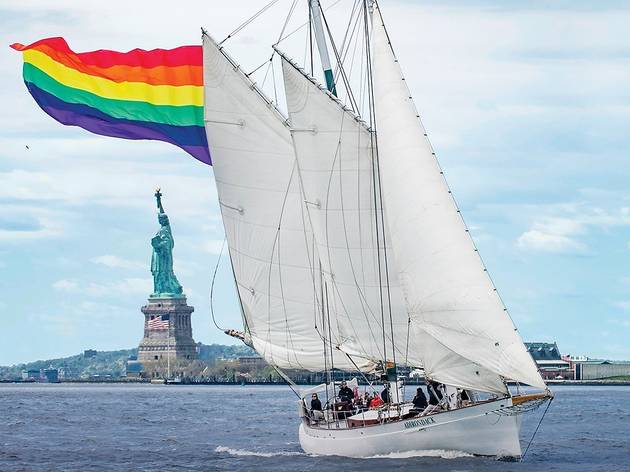 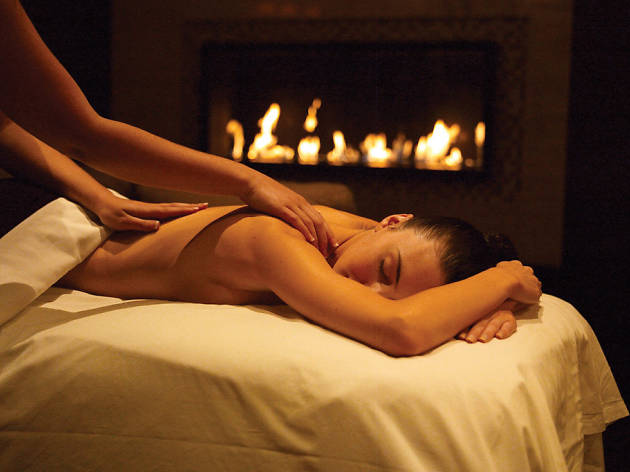 It’s no secret that New Yorkers are stressed, but when it comes to unwinding, we’re pretty competitive about that too—that’s where the best spas in NYC come in. The city boasts some of the most luxurious spas in the country, but affordable spa treatments also abound. So get inspired with birthday party ideas in NYC or date night ideas in NYC and book yourself a treatment at one of our favorite New York City spas.

RECOMMENDED: A complete guide to Spa Week in NYC 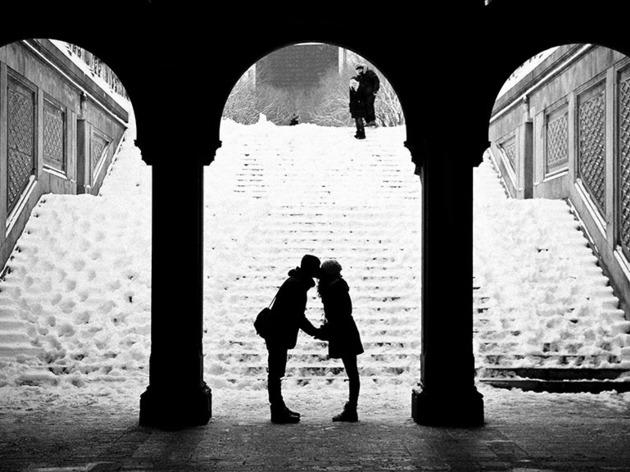 Is there any city quite so dramatic, romantic and inspiring as New York in the snow? We're going to go ahead and say no—NYC wins the crown. And when you peep at these beautiful photos, we think you'll agree with us. 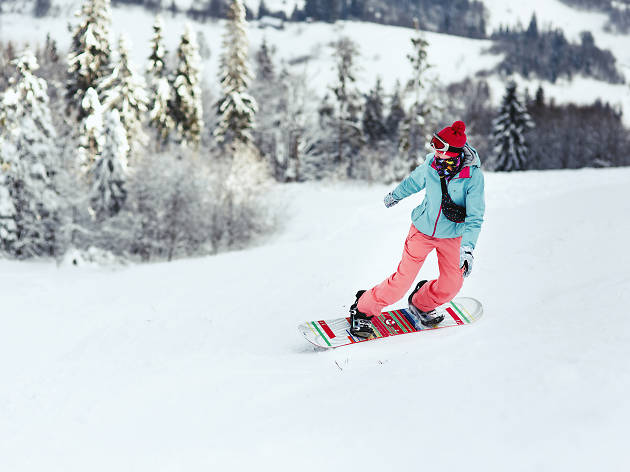 No car? No problem. Many of the best ski resorts for a weekend getaway are accessible through budget-friendly bus and train travel packages. Grab a hot toddy, snuggle up by a fireplace and start planning your best winter getaway ever. 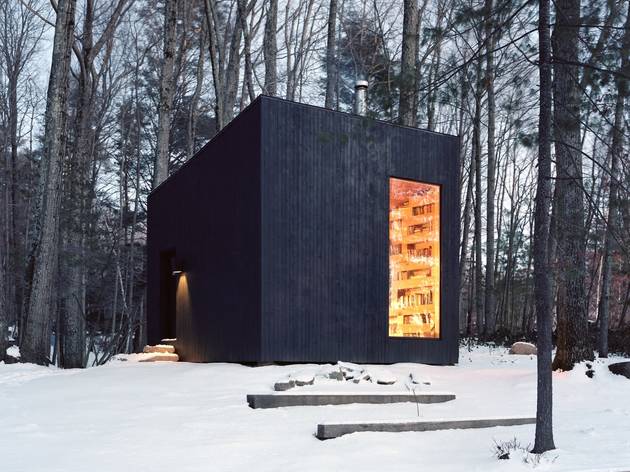 With a long winter before us, escaping New York City on a secluded getaway is at the top of our list. We're craving a respite from the busy lives we lead in NYC and are seeking to snowshoe in the Adirondacks, walk solo in Rhode Island, roast marshmallows at an isolated campsite in the Catskills, and more. These spots make for ideal trips during times of global crisis and not. As fun-filled as camping sites, cycling and hiking trails are, there is something about going a bit farther away that makes for more memorable times—especially given the current travel restrictions in place. So, without further ado, in no particular order, here are the best secluded getaways to take from New York to escape the crowds.

NOTE: Although our list has been vetted, re-opening guidelines in the New York area are constantly changing. Reach out to specific venues and destinations before planning a trip.