Where to watch the Mardi Gras Parade in Sydney

Sydney’s annual LGBTQIA+ festival is back and poised to fill the city with colour and joy on March 6. But because of 'you know what', things are going to look a little different this year.

The usual parade hordes won’t be treading the ‘Pink Mile’. Instead, the pride march down Oxford Street has been transplanted to the Sydney Cricket Ground (SCG) with more than 100 community groups marching and huge performances from the likes of British pop diva Rita Ora (find out more about that here).

Tickets for the arena spectacular sold out fast, but if you didn't manage to snag yourself a seat to the new look parade, never fear – you can still feel the love and have a fabulous time at venues that are screening the parade and throwing parties with drag queen hosts, DJs and queer performance artists, all over the city. Here's where the gay ol' times are going down.

Looking for more fabulous fun? Check out the best Mardi Gras events in Sydney, or get in a colourful mood with where to find rainbow paths and crossings in Sydney.

Boasting five nights of drag every week, you could argue it’s always Mardi Gras as this Oxford Street hub. The festive fair is turning up for parade night, with a screening hosted by the fabulous Charisma Belle and Annie Mation, also featuring an all-star cast of Sydney drag entertainers. Entry is free and it kicks off from 7pm, first come, first served. The Universal team can also get you warmed up with a good old fashioned drag brunch earlier on the day. Drag Brunch at Tiffany’s features Karma Bites, Les Beau Fierce and Raquel Feltch.

This Oxford Street stalwart on the corner of Taylor Square, the original epicentre of the parade, is hosting an official party with live entertainment, queens, spots, shows and DJs across three levels. Maxi Shield will be upstairs at the jazzy Ginger’s Lounge, hosting the parade on the big screen, and the ground floor and Polo Lounge will also screen the parade with loud and proud entertainment.

The quintessential Sydney gay bar and tried and true favourite of the ‘Pink Mile’ is going all out for its parade viewing party, with a ticketed, seated event with drinks and canapes. Marilyn Mootrub is on hosting duties with entertainment and DJs throughout the night and the parade streaming live on the big screens. Get tizzied up – there are prizes for best dressed. Tickets are $94.98-$105.53 and you can get them here.

The prettiest boys in Sydney have always packed out the courtyard and upstairs dance floor here. On parade day, the doors will be open to everyone from 2pm, with DJs Colin Gaff, Alex Taylor and Adam Love playing well into the night. There will also be a photo booth in the front bar and all the parade action from the SCG screening in the courtyard from 7pm. Order an Absolut Banger cocktail to get you feeling festive, with $2 from every drink donated to ACON and the Bobby Goldsmith Foundation charities. Walk-ins only. 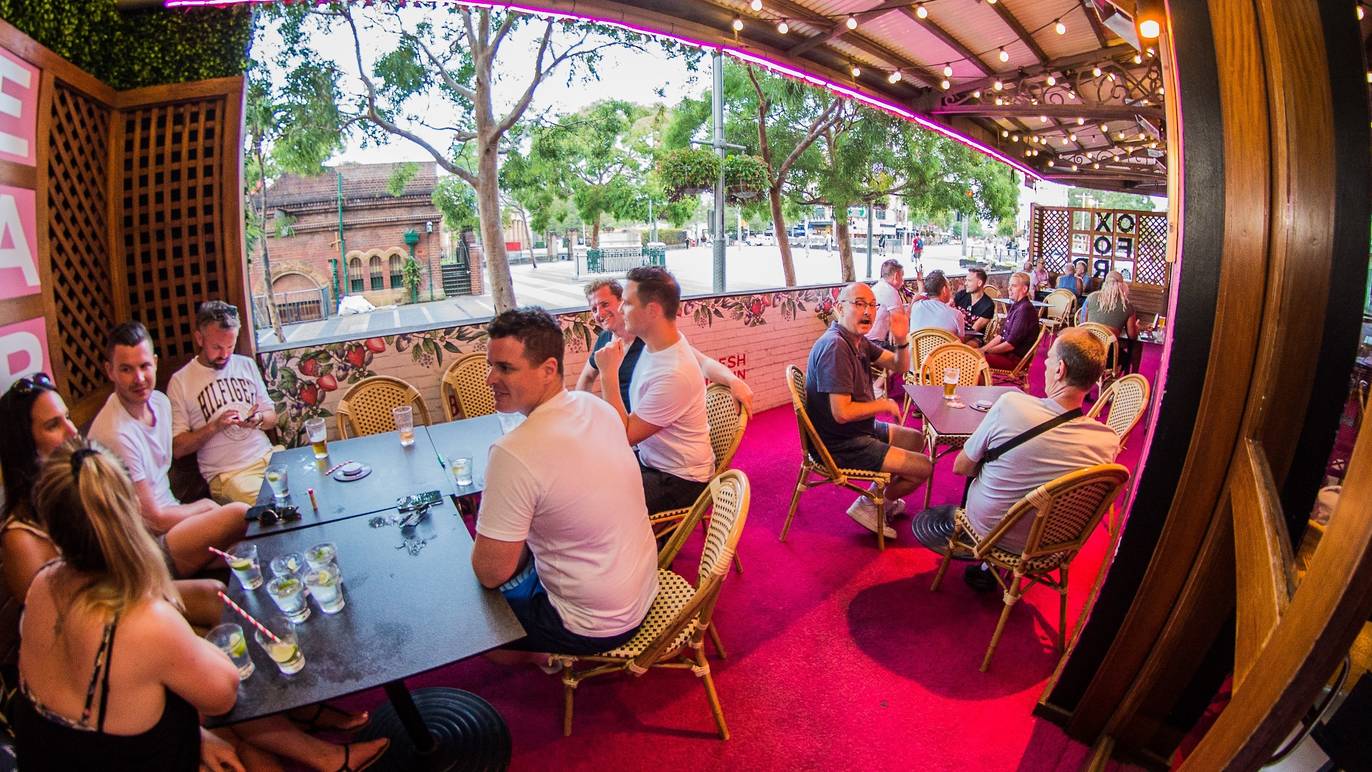 The Vic on the Park, Marrickville

This popular Inner West pub is firing up its spacious outdoor areas for a parade day extravaganza with the disco-loving, boiler-suited Dollar Bin Darlings on the decks. Hosted by Aunty Jonny and the Bottom Dollar Buddies, the Vic will be live streaming the parade complete with go-go dancers, glitter bombs and more. Arrive in your best glad rags, as there’ll be prizes for the best dressed on the day.

Redfern’s artsy neighbourhood bar always welcomes the weird and wonderful, and on parade day the antics are kicking off from 3pm with DJs Jonny Seymour and Ayebatonye and performances from Sarabi Toki, Sarah Moany, Kilia Tipa, Kendall Brown, Betty Grumble, and more to be announced. The parade will be streaming from the evening of course, and entry is free and capacity is limited. If you need some assistance with the Sunday scaries, entry is free for Recovery Social on Sunday, March 7, hosted by DJ Jonny Seymour from 2pm.

The home of Priscilla, Queen of the Desert is a no-brainer for the sparkliest, draggiest antics on parade night. While the more casual viewing party in the basement has sold out, there’s a fancier affair upstairs in the VIP Mardi Lounge, which transformed the upper domains into a groovy tequila lounge, with an intimate dining experience hosted by resident queen Etcetera Etcetera with the parade streaming live. Tickets range from $169-$200 and include a Don Julio rainbow margarita slushie on arrival, an Italian grazing feast of canapes and pizza, and a five-hour bottomless beverage package. Get your tickets here. After the parade, the sold-out Broken Heel takeover party will be shaking a tail feather from 11pm.

This huge pub on Newtown’s main drag doesn’t want you to miss a moment of the parade, so it will be streaming on every screen as well as a big projector screen out in the beer garden. Queens Domino Trix and Sheilita Buffet will host you for the night, with DJs keeping the party going after the parade wraps. Book a table here.

We were devastated when Chippendale’s neighbourhood party bar closed its doors for good, but now the Freda’s team are flogging a café on Taylor Square, and you bet they’re throwing a parade night party. Stay tuned for details on the website. 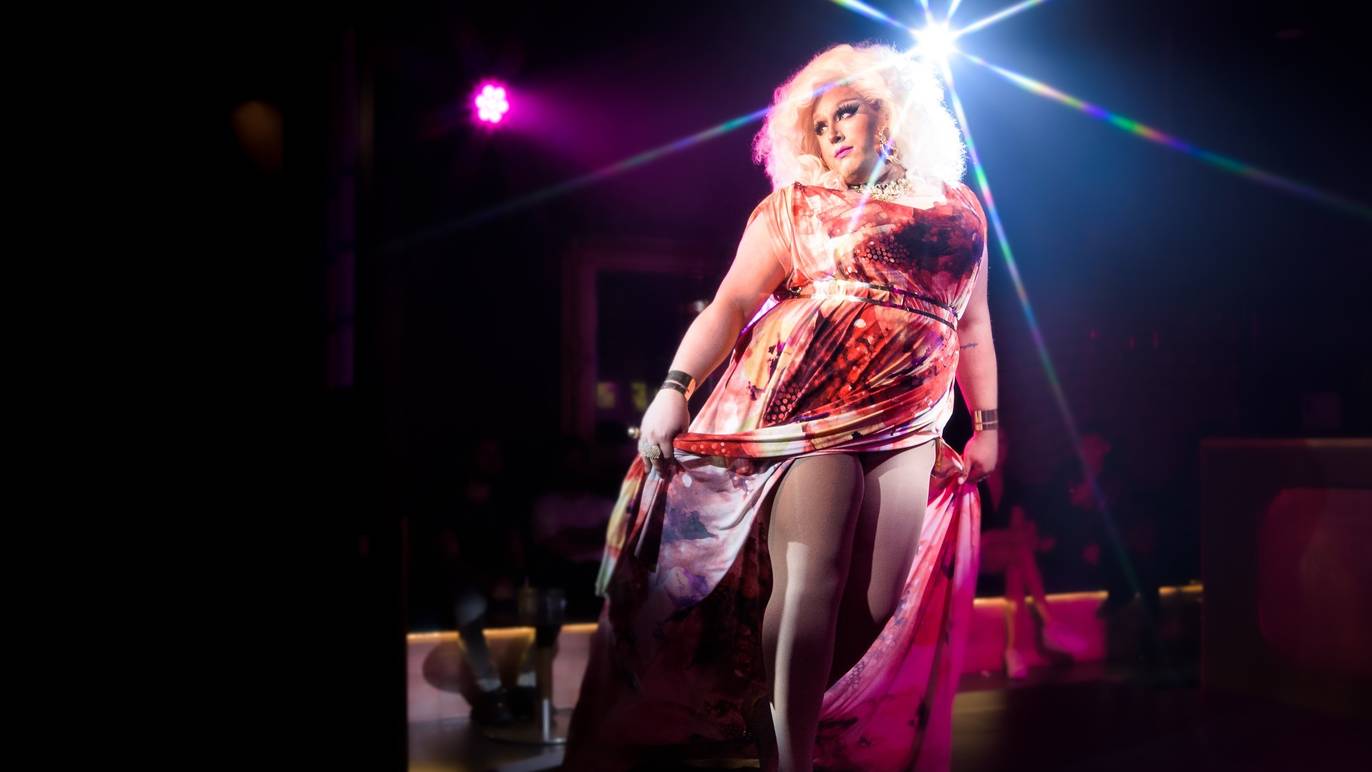 This popular queer haunt on Oxford Street is, of course, streaming the parade. The Welsh lass with the big ‘stache, Yaz Queen, is on hosting duties with DJ Victoria Anthony keeping the party going into the night. Get started early with DJ Justin Rawrs on the decks from noon, with entertainment from Decoda Secret from 3pm and more tunes from DJ Neil Hume from 7pm.

This beachside venue is a hot spot for snacks on sticks and Japanese beers, and it's going glittery for a parade viewing party with fabulous drag queen host Fran Giapanni. They’ll provide the body glitter, cold drinks and hot tunes and you can help raise money to support LGBTQIA+ young people by donating $10 on the door to Wear It Purple. There’s $10 Sex on the Beach cocktail slushies and prizes for seated chair dance-offs. Book a table here.

This laid-back boozer just off Oxford Street is hosting an official parade viewing party with hosts Marlena Dahli and Cherry Kills calling the shots and the parade streaming live and loud across two levels. There are performances from the drag artist hosts, Pure Blonde drink specials, themed cocktails and DJs till late. Category is: all things shiny! Secure a table by booking here.

This club got a bit clever with social distancing by exchanging tables and chairs for beds, and now they’re all set to roll out the confetti, the glitter, and the bedazzled pajamas for a Mardi Gras Slumber Party. Hosts Brendan de la Hay and Twiggy Styx will be joined by James Alexandr and Banquet DJs. Tickets are $27.78-$44.44, get them here. 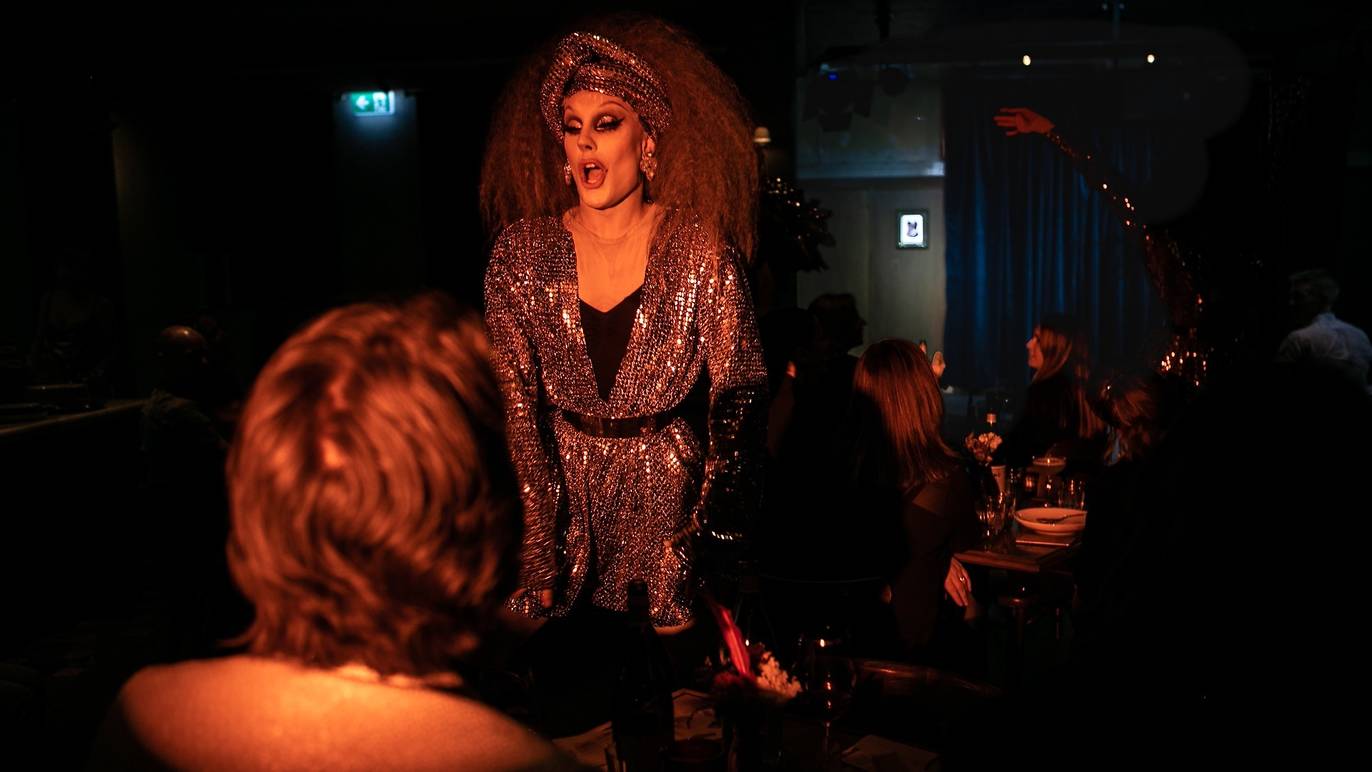 This bar always serves a fusion of Asian street foods, and now it is serving a parade viewing party hosted by drag royalty Verushka Darling. You’ll get a lychee martini on arrival, a share plate style feast, and DJ Ausli Hue will keep your feet tapping. Proceeds from the night will go towards Twenty10, a charity supporting LGBTQI+ young people in Sydney. Tickets are $90.76 and you can get them here.

Queer party starters Heaps Gay are taking over this Inner West pub with a parade screening and DJs, performers and delicious drinks way into the night. This event will be a first come, first served deal. Stay tuned for details on the Facebook event page.

Enter this rambling, sprawling Crown Street drinking hole via the Pride Rainbow path and resident drag queen Pomara Fifth will greet you with a Camptastic Cocktail to get you warmed up for a live and loud parade viewing. Plus they'll have DJs playing camp hits into the night. $2 from each cocktail on the special Mardi Gras list goes to the Minus18 Foundation who are champions for LGBTQIA+ youths. This is a ticketed event and doors open at 4pm. Grab a ticket for $10 here.

Mardi Gras is much more than the parade 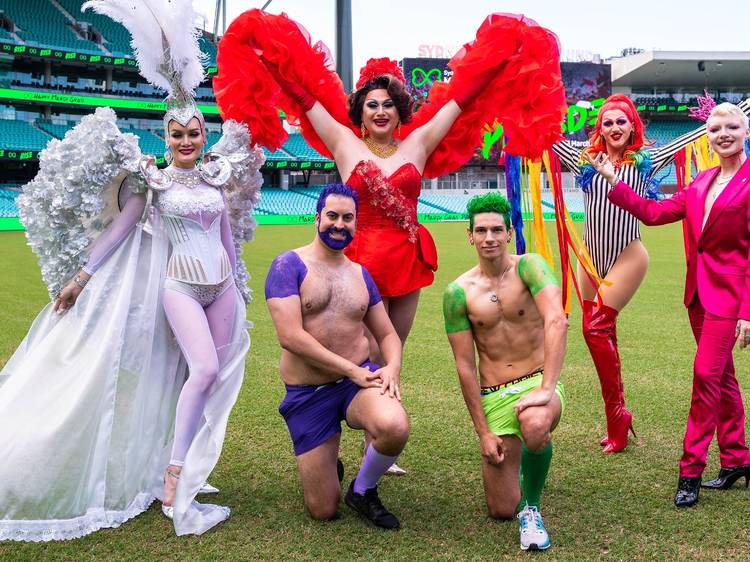