This popular pocket of the Northern Beaches is best known for its foamy shore breaks and ferries, but Manly also dishes up some good dining options for after the sun goes down and before the party vibes are cranked up to 11. While you're in the neighbourhood, check out our guide to the best Manly bars as well. For more dining inspiration, check out our guides to the best Bondi restaurants, Surry Hills restaurants and Newtown restaurants.

The best restaurants and cafés in Manly 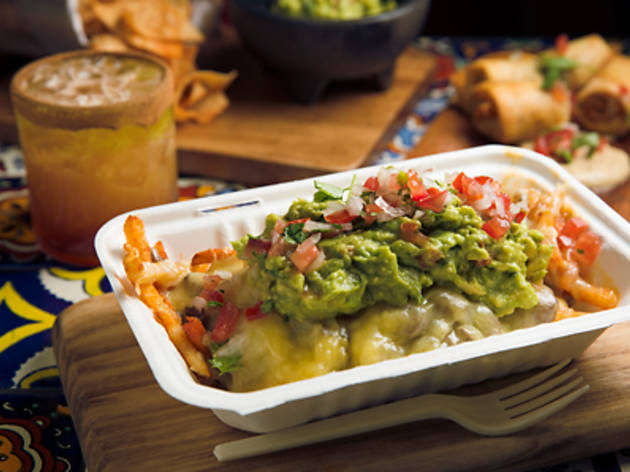 Chica Bonita (Spanish for beautiful girl) is a tiny taqueria hidden in a dingy walkway just off the Corso in Manly. Silver, star-shaped lightshades dangle overhead throwing shards of light against worn, dark brick walls. There are melting candles and crumbling plaster everywhere. Everyone’s sitting on metal chairs and ripping into chilli fries which come out of the kitchen covered in layers of beans and guacamole, looking like corn-chip birthday cakes. But we go straight for the chimichangas – feather-light pastry filled with shredded pork, coriander leaves, a fine dice of tomato and a side of chipotle mayo. 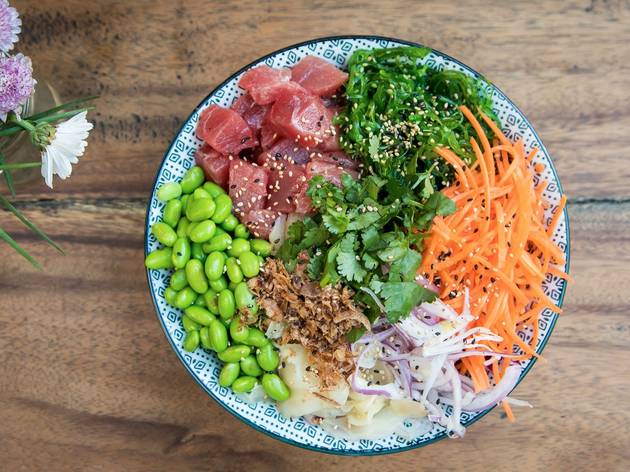 Ever tried a Nepalese dumpling? They’re called momos, and you can find some of the best pudgy little pork pockets on the Northern Beaches at Momo Bar Manly. Seems simple, right? Wrong. This little Market Lane kitchen is also doing poke bowls. Yes, the Hawaiian fish salad. Stay with us, because somehow Nepalese-Japanese-Hawaiian-via-the-Northern Beaches works an absolute treat. Locals know it – a small queue snakes out of the shop front and virtually every table is taken up on a Friday lunch time. 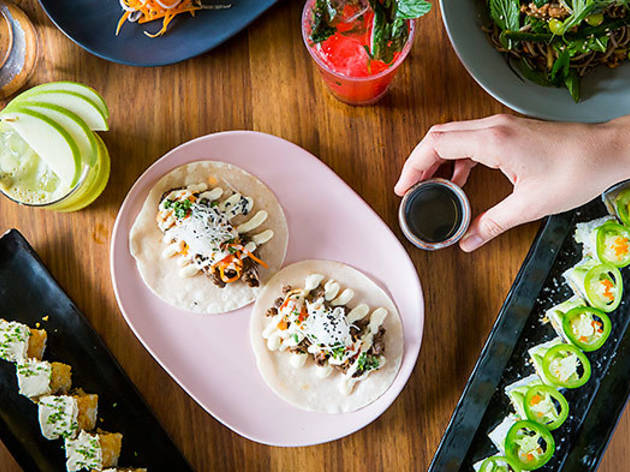 You know that time you were eating your sushi roll and thought “This would be better with French onion dip”? No, never? Yeah, us neither. But tell that to Sunset Sabi, Manly’s Japanese restaurant, opened up by the guys behind equally hip and awesome eatery Chica Bonita down the road. They don’t care what you think. They’re doing whatever the hell they want, and we can’t help but like their style. The sushi in question is called ‘the French Roll’. Nori is filled with raw salmon, butter pickles and crushed-up chilli Kettle chips. On top is a slick of the aforementioned French onion dip. It’s a bit rock and roll, it’s a bit weird, and although, as we eat it, we keep saying, “It doesn’t really work”, we finish a plate of eight between two in no time. 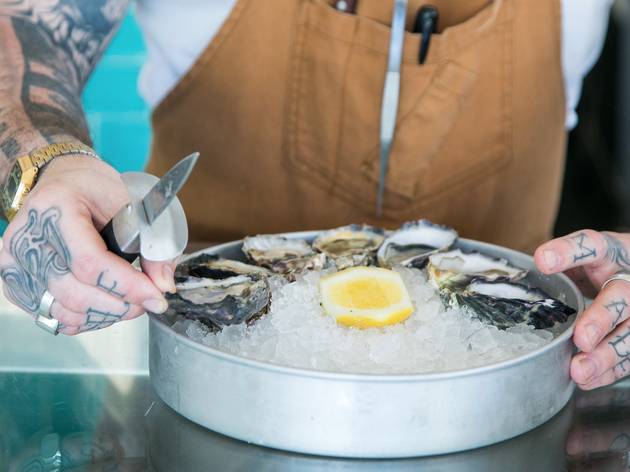 A tray of oysters so fresh and briny they might have been sent back from the future, and a cold tinnie of Magic Rock’s High Wire grapefruit American pale ale is pretty much exactly what you want for supper on a sweaty Sydney evening. And it’s definitely the best way to approach Arthur’s Oysters and Seafood, the sustainable seafood restaurant in Manly by Scottish chef Jason Wright. 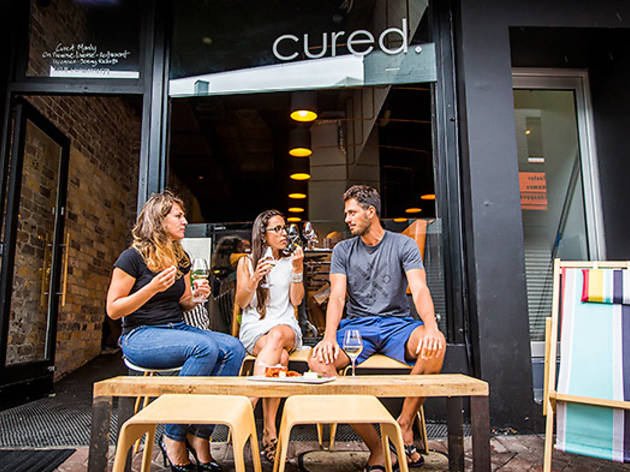 Cured is all about simplicity, with a menu that exclusively features cured meats and cheeses. But is it too simple, too pared-back? We ventured north to find out. Positioned in a laneway just off the Corso, it’s a warm, welcoming space. You enter into a long, narrow, bare-bricked room with tight-knit tables, a coffee machine at the back, and a makeshift open kitchen in the corner, featuring little more than a meat slicer and a surface for cutting. Sausages and hams dangle from the ceiling. 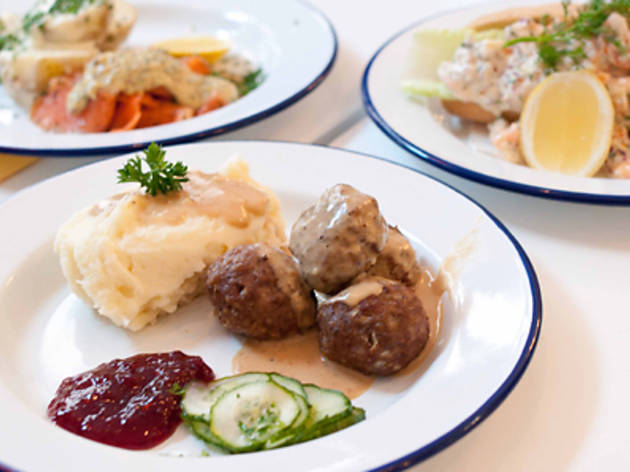 This bright and chirpy café is a design lesson in Nordic minimalism, perked up with cheerful splashes of patriotic yellow and blue. Fika has already proven a hit with Swedish expats, all cosied up with mugs of Oboy hot chocolate or bottles of Rekorderlig and Two Elk cider. You’ll have to order and pay at the register, but your food will be brought to you when it’s ready. They do breakfasts but at lunch the menu shifts to more traditional Swedish fare. Did someone say meatballs? You betcha. 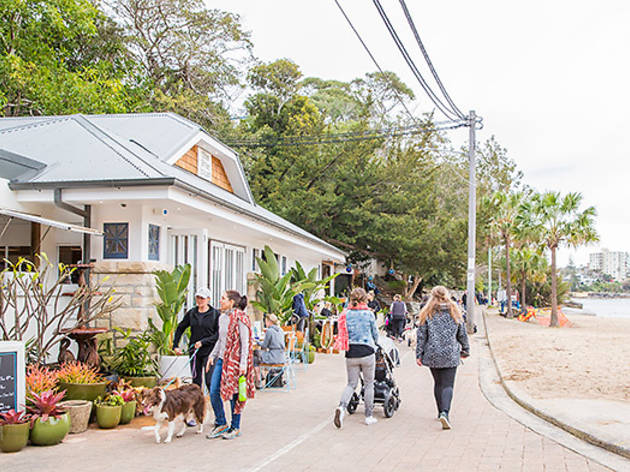 This spot is tucked away right around the bend from beautiful Manly Beach, and it's a triple threat: kiosk, café and restaurant in one. Wood-fired ricotta with honey, cucumber and buckwheat; autumn ravioli of duck, potato and rhubarb; and the famous Boathouse beer-battered flathead and chips are highlights of the café menu. The venue is open all day for breakfast, lunch and dinner, and it incorporates the previous Shelly Beach kiosk, which was given a polish and reboot. 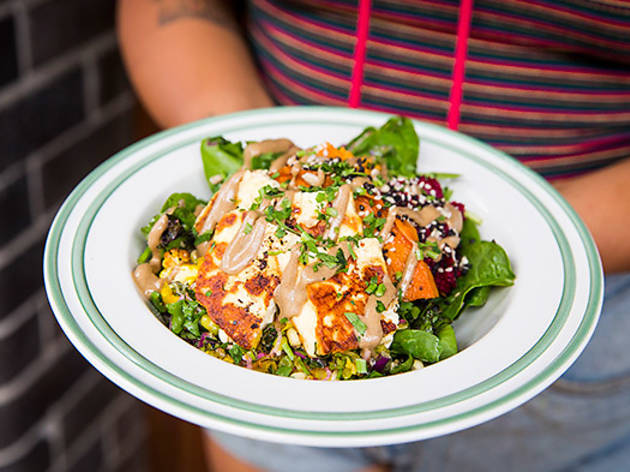 For a long time, health food has been a source of contention for diners who just want to eat something delicious. From dry, brittle interpretations of 'bread' to tasteless salads bereft of uplifting dressings and, sin upon sin, unmassaged raw kale that actually feels like it's cutting your mouth, most of us would rather actually exercise than consume food that's this uncomfortable to eat. But no longer, because Ora in Manly is serving food that is good for your health and tastes amazing too. 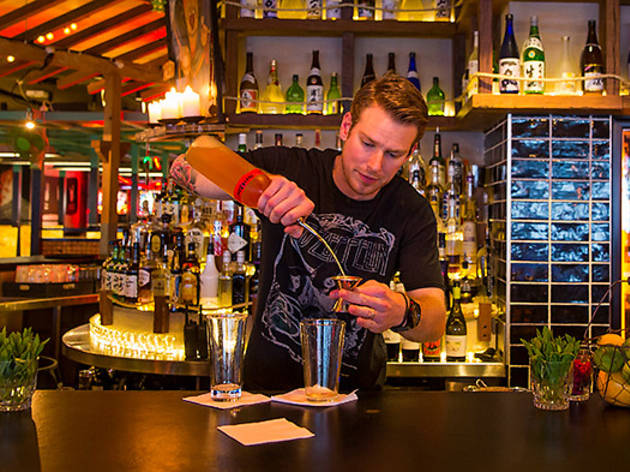 When we’re hanging for some pan-Asian/surf town fusion, we head to Manly’s Daniel San. The entranceway is lined with martial arts trophies but if you’re after mad self-defence skills, this is not the dojo for you; it’s more like the clubhouse you’d hit up after a tournament to blow off steam. Once inside, the massive space opens up into a neon-lit hall that’s very rock’n’roll. For bar bites we’re all about the skewers of glazed pork belly or tender beef fillet. There’s also broccoli, sweet potato and corn for your herbivorous homies. 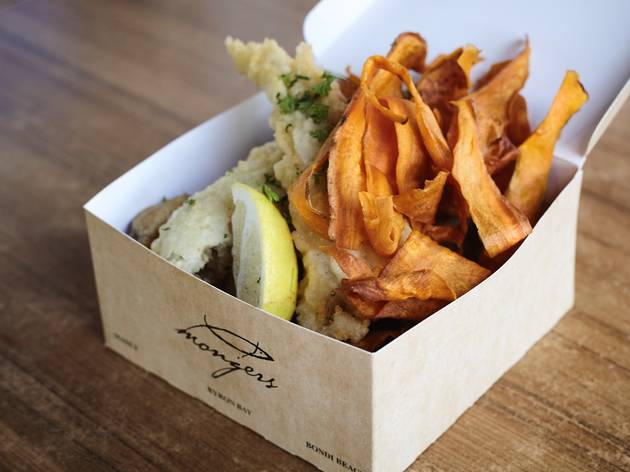 There are more options for fish and chips in Manly than you can throw a thong at, but Fishmongers stands out from the crowd. Hoki is dunked in a light tempura batter that enhances rather than competes with the flavour of the fish. To the side are excellent hand-cut chips that are streets ahead of the usual fare. Deep fried strips of sweet potato on top add some extra crunch. These guys also try to do the right thing by our ocean friends by selling MSC certified seafood. 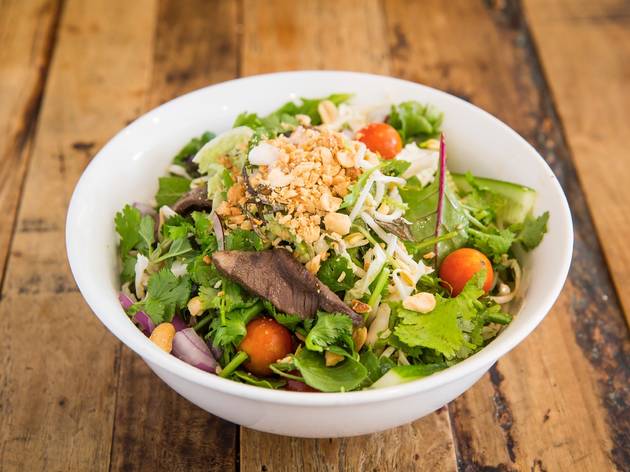 Some things in Sydney are worth queuing for, and some things are not. Banana Blossom in Manly (with sister stores in Bondi and Mona Vale), which is pretty much rammed to the nines every time we go in, is worth the wait. That's because the Asian-style salads here are massive, filling and totally delicious. In the Manly outfit, each salad is made fresh in front of you in the open kitchen beyond the counter. There are a few simple tables inside and a couple of cute wicker tables and chairs outside, but most people choose to take away to sit and eat on the beach.

Grab a drink after dinner 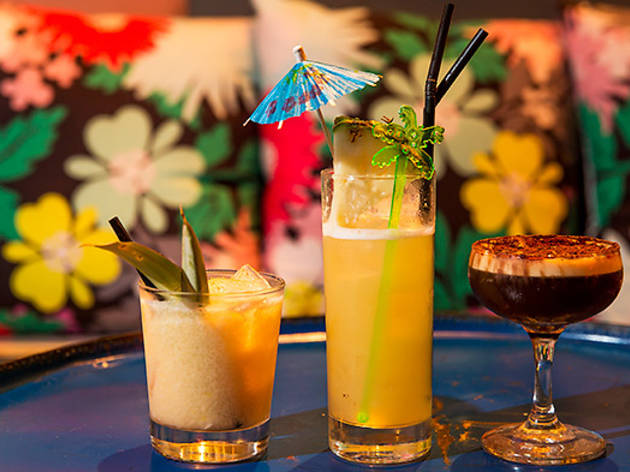 What's not to love about a suburb that boasts both a harbour waterfront and a beautiful beach with a cracking surf break? That's why Manly is such a popular spot. But once the sun goes down and you've changed out of your sandy togs, you need indoor entertainment, and ideally, a drink. 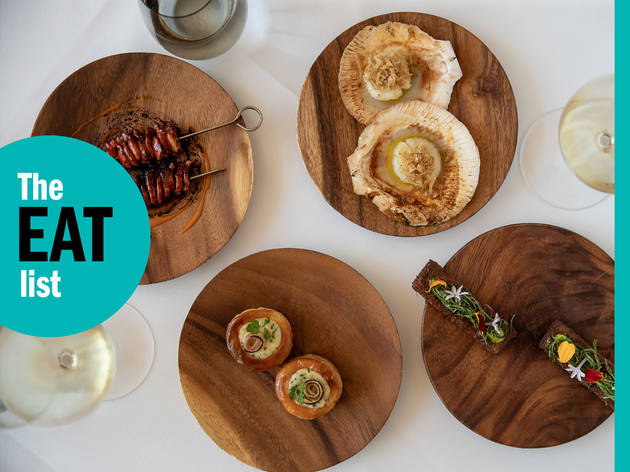