The best restaurants in Notting Hill

Looking for a picture-perfect restaurant? Here's our guide to dining and drinking in the ever so picturesque neighbourhood of Notting Hill

March 2019: We’ve added three ace contenders for those of you who like a bit of fine-dining: Caractère is a new sophisticate from Michel Roux Jr’s daughter and her chef husband (ex-Le Gavroche); Six Portland Road provides manna for Holland Park’s upper-crust gourmandisers, while Core by Clare Smyth is the sensational two-Michelin-starred debut from Gordon Ramsay’s one-time chef-patron. Moving into multicultural territory, we’ve included Vietnamese grill Mam and Andina Picanteria, a Peruvian joint from the team behind Ceviche and Andina.

Whether you’re after a simple chippy or something a bit more snazzy (or even Michelin-starred), Notting Hill’s jam-packed with great cafés and restaurants. Whatever you desire – from a Carnival time top-up to a refined dinner – pile through our list below of the best eateries in this ace area.

The best restaurants in Notting Hill 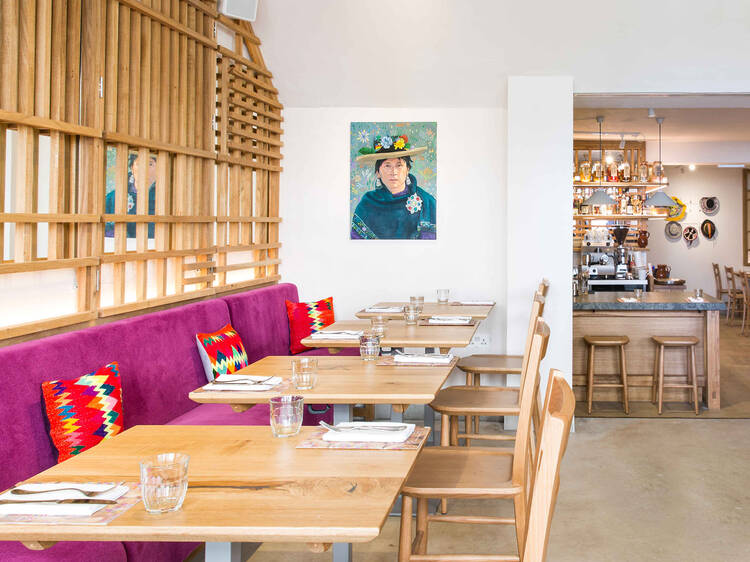 London’s ceviche king Martin Morales is at it again: this time in Notting Hill. Here is a modern take on a typical Peruvian picanteria – a casual daytime dining spot with an anything-but-boring menu that sparkles with bright, sunny flavours. The ceviches are brilliant (natch), and they’re backed by the best pisco sours this side of Machu Picchu. Also check out the authentic Peruvian panaderia (bakery) next door. 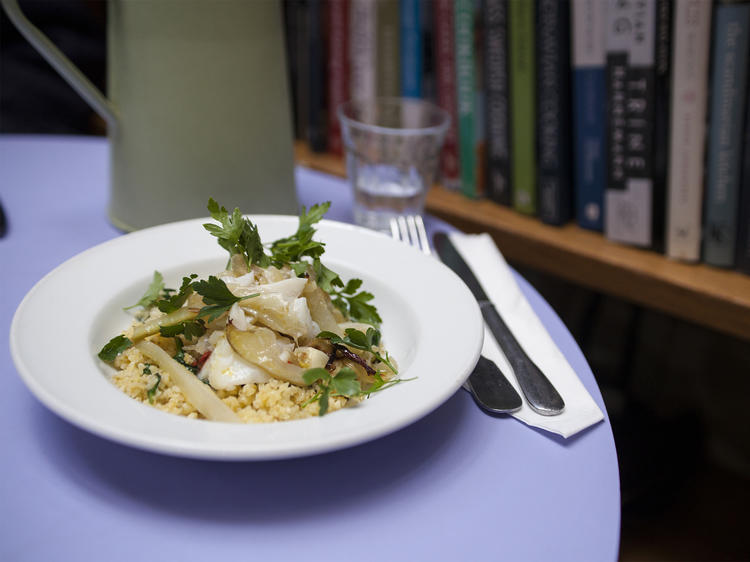 As a cookbook specialist, this bookshop-cum-café is one for the purists. Each week, its tiny in-house kitchen road-tests recipes from the latest titles and serves them as two or three-course lunches at OMG prices. There are also loads of cakes, all of which would have Mary Berry coming back for seconds. It may be off the tourist trail, but this is a hugely popular spot – so expect to queue. 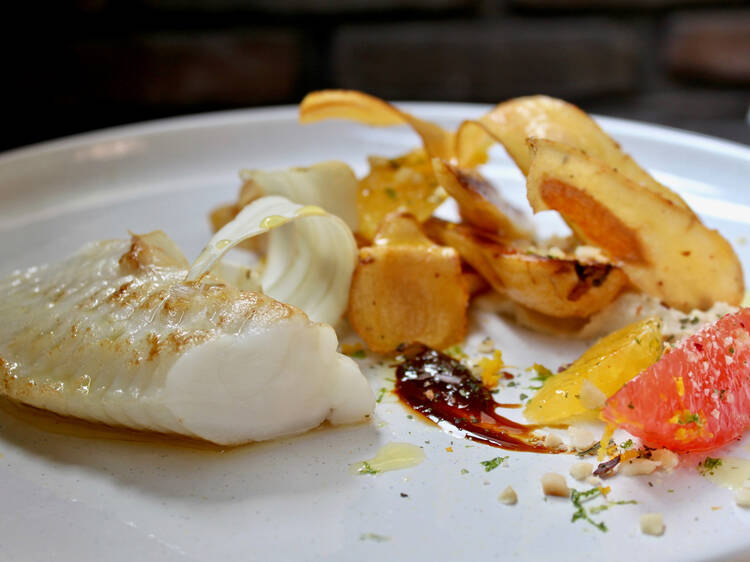 The main characters behind this shiny new Notting Hill sophisticate are a starry couple: she is Michel Roux Jnr’s daughter, he is a former head chef at Le Gavroche. Together they have created a classy contemporary venue with a menu that’s oddly divided into six character traits: ‘curious’, for example, equals roast diver scallops with radicchio, hazelnut, blood orange and beurre blanc. 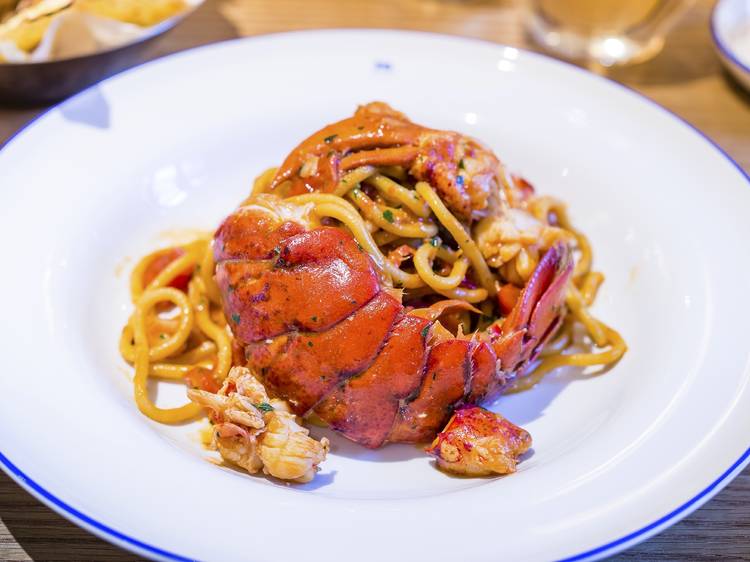 If you own a superyacht and buy Chucs’s luxury swimwear, you’ll love this beautifully lit, serene Italian from the fashion brand; if not, you’ll be panicking about the bill before you bite into your first crudité. Still, big bucks pay for solicitous staff and classic Italian dishes prepared with love and skill – plus the chance to shop in the adjoining boutique. 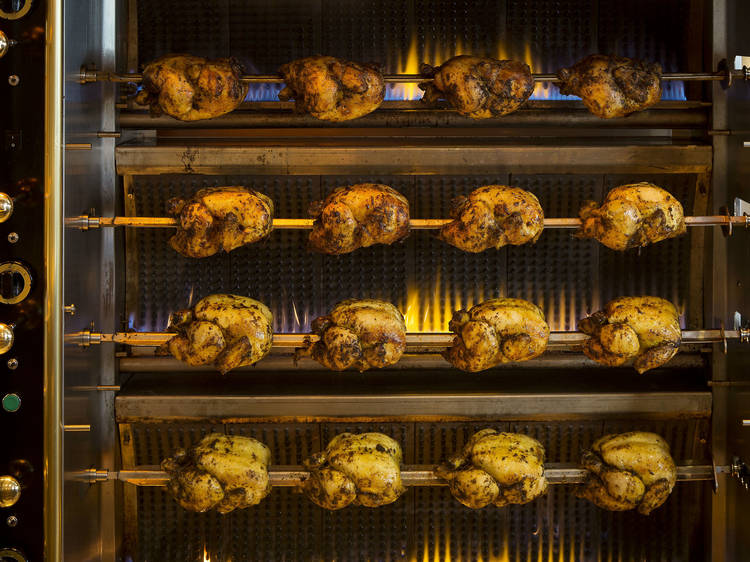 This wholesome clean-living take on the chicken trend smacks of middle-class family holidays in France. Herb-marinated, whole-roasted happy hens are brought to the table on a wooden board, along with your choice of sauces and zingy salads teeming with heroic superfoods – think kale, quinoa, pomegranate, nuts and seeds. Hot sides include classic ratatouille – or the rebel of this goodie-goodie family, truffled mac ‘n’ cheese. 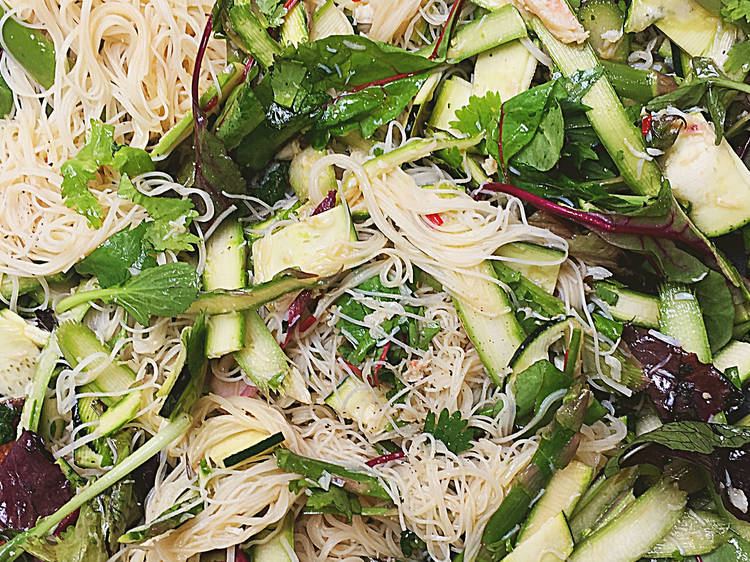 A hip café-cum-salon with a Mediterranean deli attached, this suitably swanky contender on Notting Hill’s Ledbury Road pushes all the right buttons with its glossy-haired punters. Flashy pantry ingredients from Spain, France and Italy figure heavily on the breakfast and brunch menus – if you’re partial to quince jelly or piquillo peppers you’ve come to the right place. Lunch, meanwhile, brings pricy sandwiches and sharing boards. 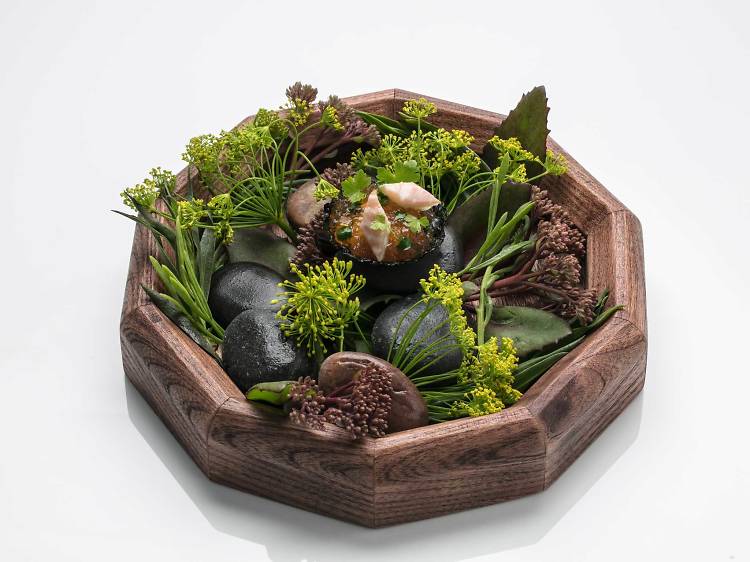 The only female chef to bag three Michelin stars in the UK (at Restaurant Gordon Ramsay, FYI), Clare Smyth’s solo debut is an unmitigated triumph. Core is housed in a gorgeous period building in Notting Hill: it’s high-ceilinged and elegant but also vibrant, not pompous and great fun. The food is special, already two-Michelin-starred special, with immense technical brio and a playful streak that makes it all very accessible. 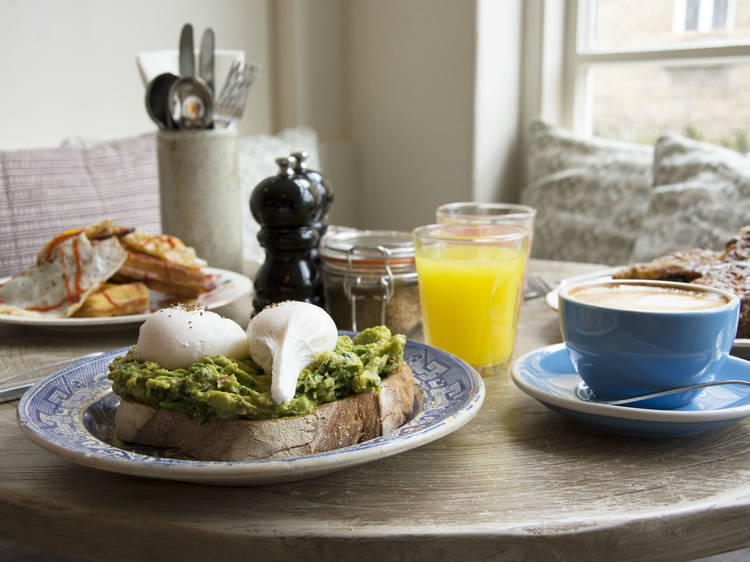 They break a lot of eggs at this bright, rustic-chic all-day café from the Soho House group. They’re given the Turkish, Calabrian and Levantine treatment, served every which way on sourdough or slipped into the house take on a McMuffin. The menu also finds room for saintly chia pots, devilish ‘cornflake French toast’, crab cakes and bacon cheeseburgers too. 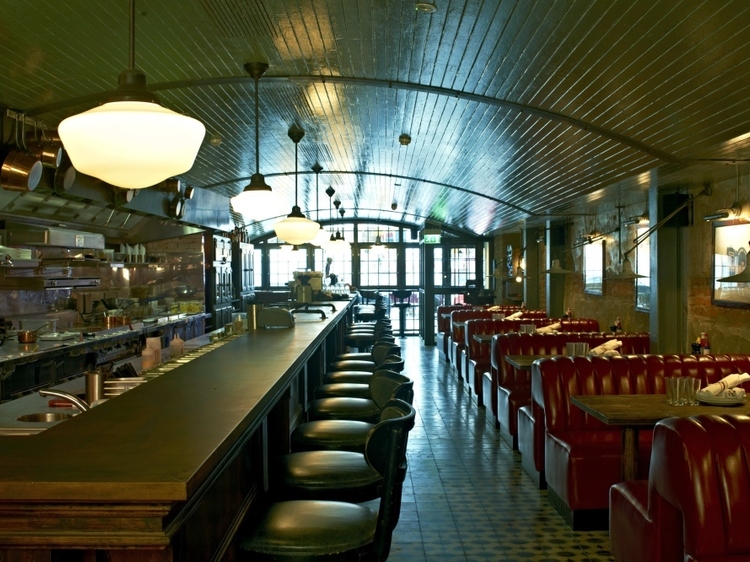 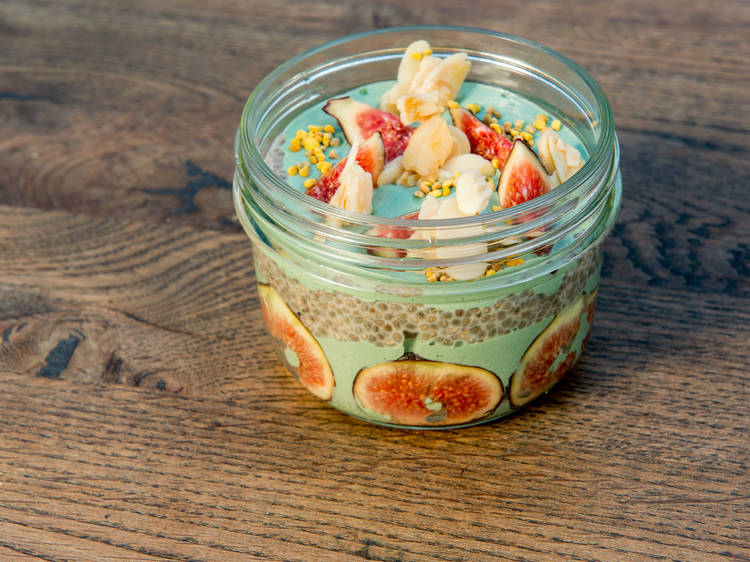 Owned by well-connected glamour puss Camilla Fayed (of Harrods fame), Farmacy sells ‘clean indulgence’ to an eager audience of moneyed Notting Hillbillies and aspirational hedge-fund wives. It’s a happy, joyful, ‘free-from’ kind of place – no dairy, no sugars, no additives, no meat and lots of plant-based stuff lurking in its signature ‘earth bowls’. Judging by the ridiculously glossy good looks of most of the customers, the idea seems to work. 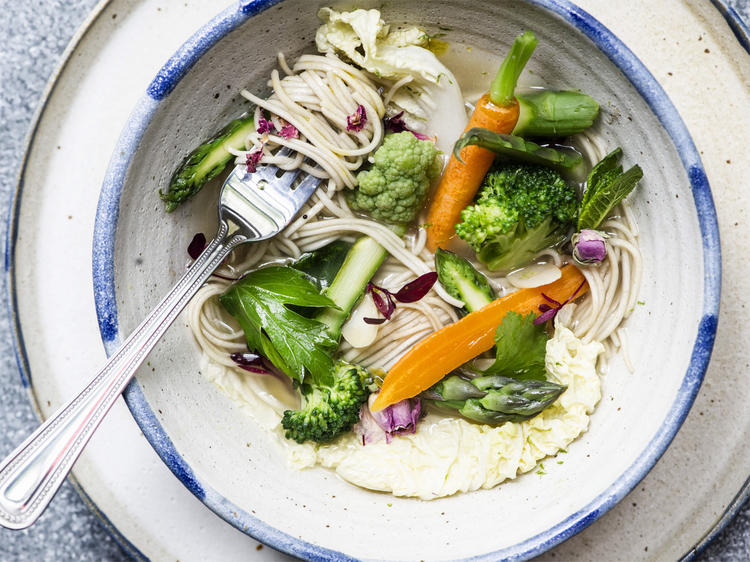 If the very idea of healthy eating in Notting Hill fills you with dread, fear not: this cute café from Aussie-born ‘farm girl’ Rose Mann is a little ripper. Colourful interiors and non-stop sunny service are matched by a healthy menu bursting with vibrant, zingy ingredients – expect hibiscus matcha lattes, açai bowls, coconut BLTs, superfood salads and other tasty renditions of the usual suspects. 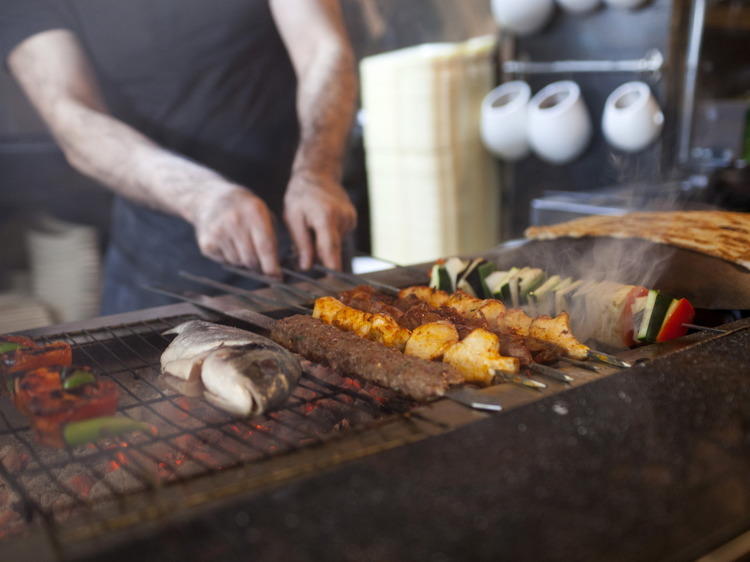 There’s usually a queue at this ‘Med-inspired’ Turkish grill, but no-nonsense service means you’ll bag a table pretty quickly. While you wait, get the juices flowing by watching Fez’s meat maestros as they rotate the hefty barbecue skewers and shave slices off the own-made doners. They also score with cut-above accompaniments including crunchy red cabbage, spice-rubbed flatbreads and tangy Turkish yoghurt. It’s BYO and they don’t charge corkage – hooray! 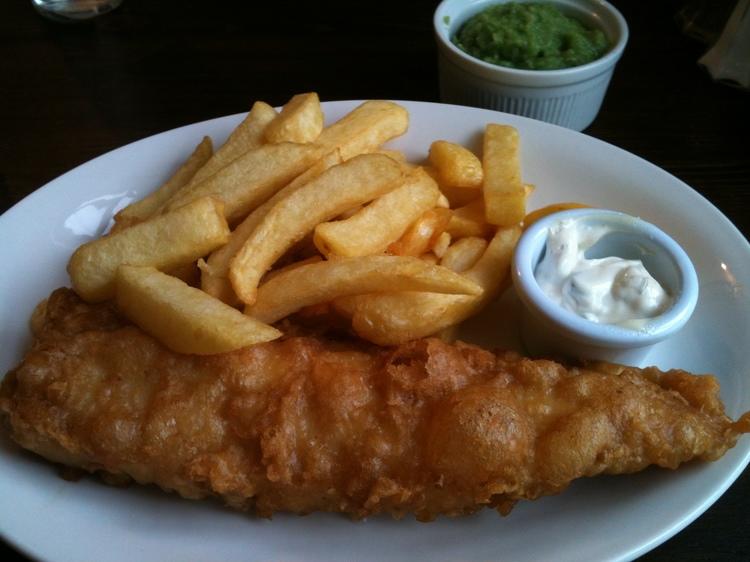 The Fish House of Notting Hill

A confident mash-up of traditional and up-to-date styling, this cute chippy is one of Notting Hill’s indie assets. The forward-looking bits include sustainable fish such as ‘rock eel’, a state-of-the-art fryer and tasteful interiors. The reassuringly familiar stuff, meanwhile, ranges from saveloys, steak pies and Sarson’s vinegar to spotted dick with custard. Lovely jubbly. 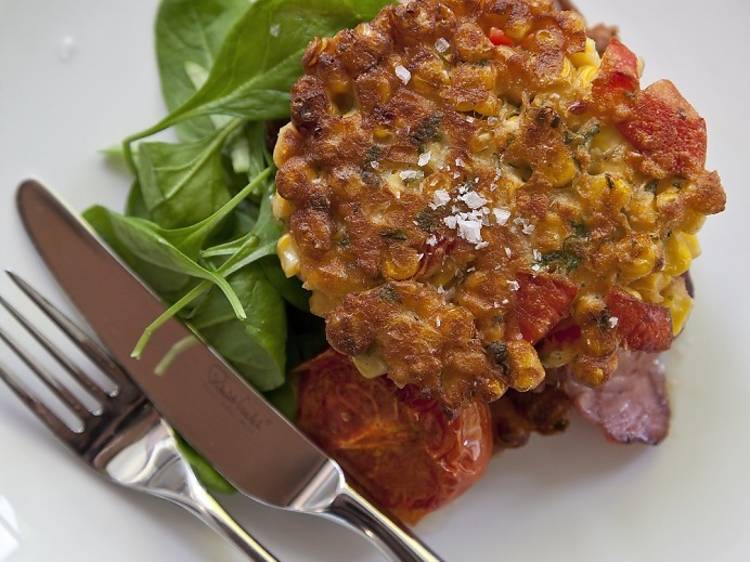 Bill Granger has built a TV cooking career out of selling the Aussie dream, and this Notting Hill outpost of his empire is just lovely: shiny, expensive-looking interiors reflect the affluent clientele, but the vibe is laid-back. The menus are as healthy or as hedonistic as you want them to be, the cocktails flow and celebrity spots are common. Booking essential. 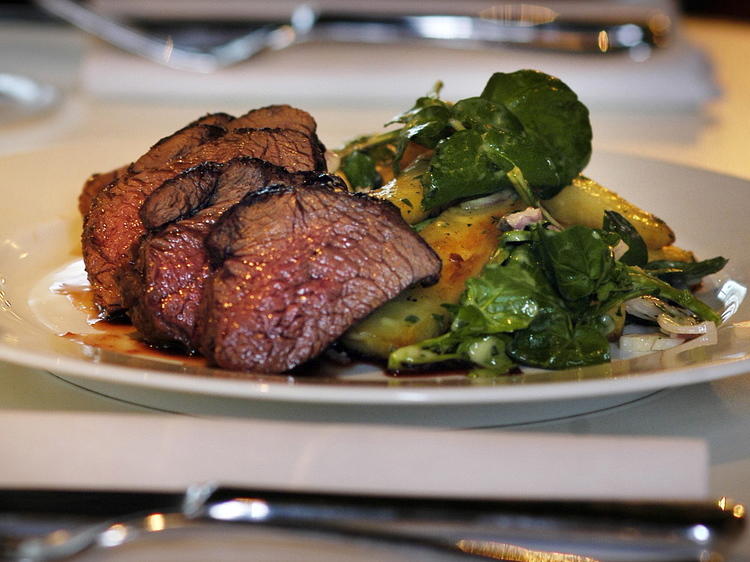 Quietly confident and refreshingly laidback – and that’s just the service at this much-loved Notting Hill favourite, housed in a one-time butcher’s shop. Ex-St John chef Tom Pemberton’s ‘nose to tail’ training shows in a seasonal menu of butch-but-stylish British dishes cooked with real flair and panache (a Blythburgh pork chop with swede and kale, for example). Prices are all-round neighbourly. 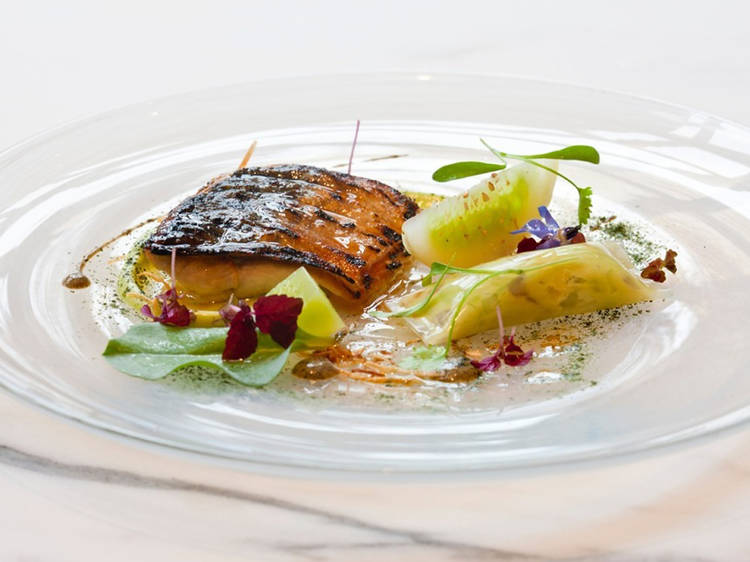 Few haute restaurants have the hospitable hum of The Ledbury. Despite its two-Michelin-starred status and deadly serious prices, this world-beating culinary corker is still in the top tier for gustatory good times – thanks to Aussie chef Brett Graham’s way with seasonal British ingredients (and much else besides). For consistently thrilling, audacious, unimaginably delicious food and genuinely friendly fine-dining, nobody does it better. 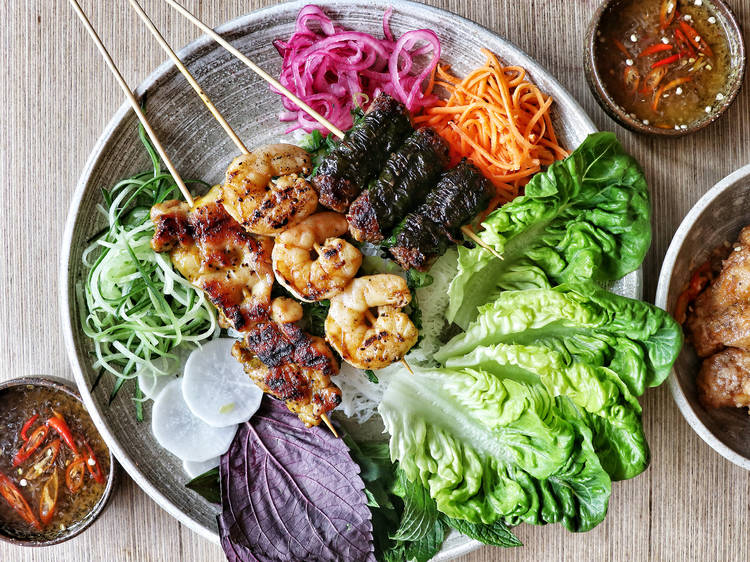 From the crew behind Salvation in Noodles, this chummy Vietnamese hangout is a sleek Hanoi-meets-London mash-up specialising in huge portions of Vietnamese barbecue with all the trimmings (including steamed rice noodle pancakes for wrapping). Items such as velvety beef short-rib over squidgy rice are the big hitters, but veggies also do well here – think tofu-filled ‘banh xeo’ crêpes and meat-free, rice-based ‘com’ bowls. 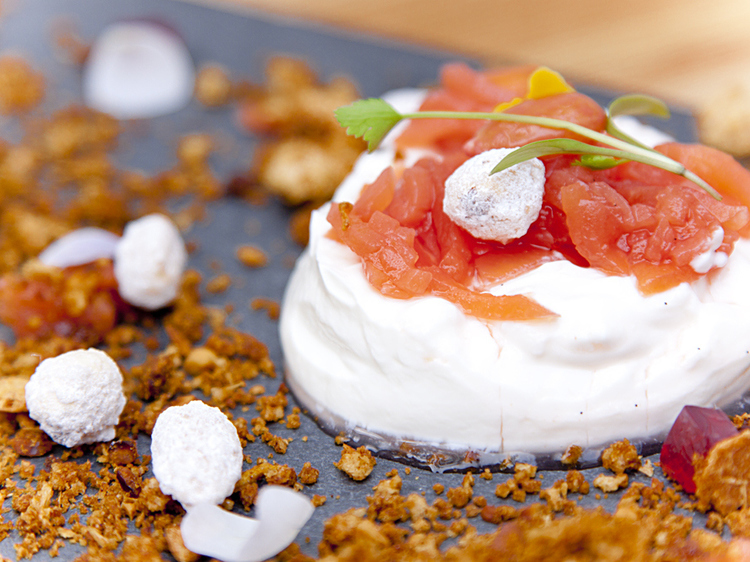 The Hellenic heroes at this stylish gaff are in the business of reinterpreting the Greek classics to impressive effect. Flavours may be reassuringly authentic, but presentation is progressive – note the meze served in Kilner jars, the hot plates of feta tempura with lemon marmalade and caper meringue, or the loukoumades with lavender honey, crushed walnuts and chocolate sorbet. We’re not in Kavos any more, Toto. 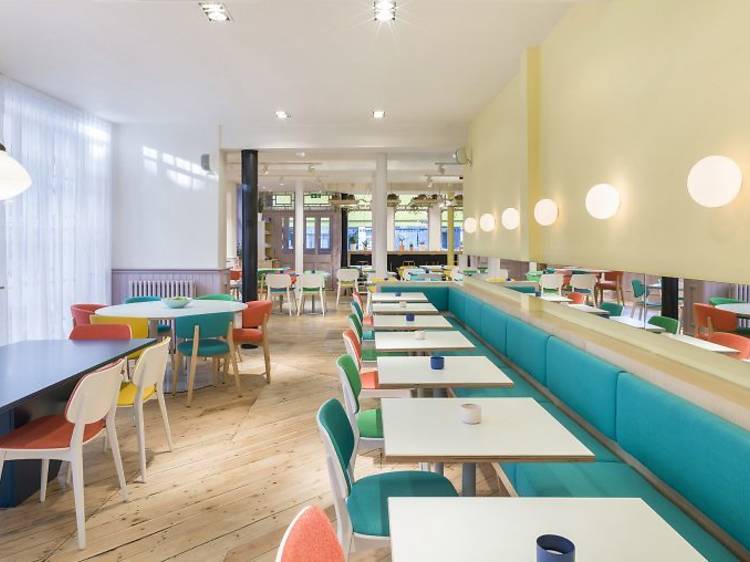 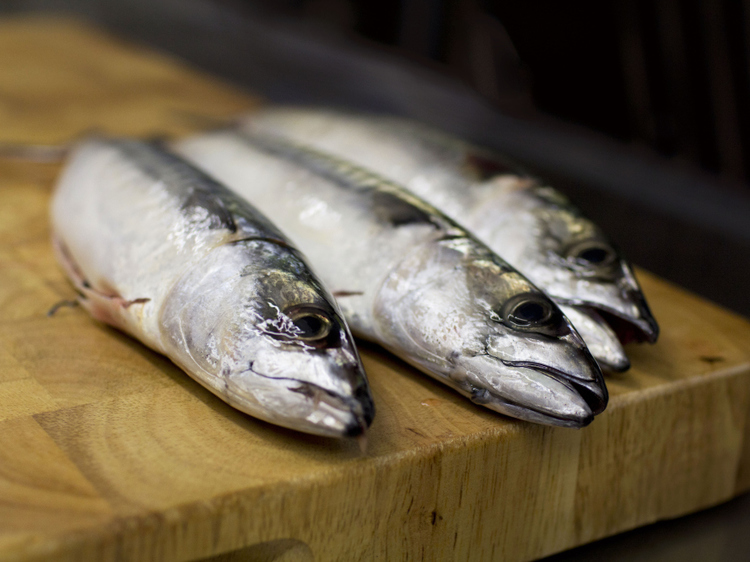 Barnyard-chic from the Gladwin brothers, who were raised on a Sussex farm and still source produce (including wines) from their home turf. Expect farm-to-table food dished up in relaxed worn-wood surrounds, with piggy portraits on the wall and bits of tractor serving as decor. The resulting dishes are inventive, playful and seasonal – think ‘mouthfuls’ of mushroom Marmite éclair or venison cigars with smoked mayo. 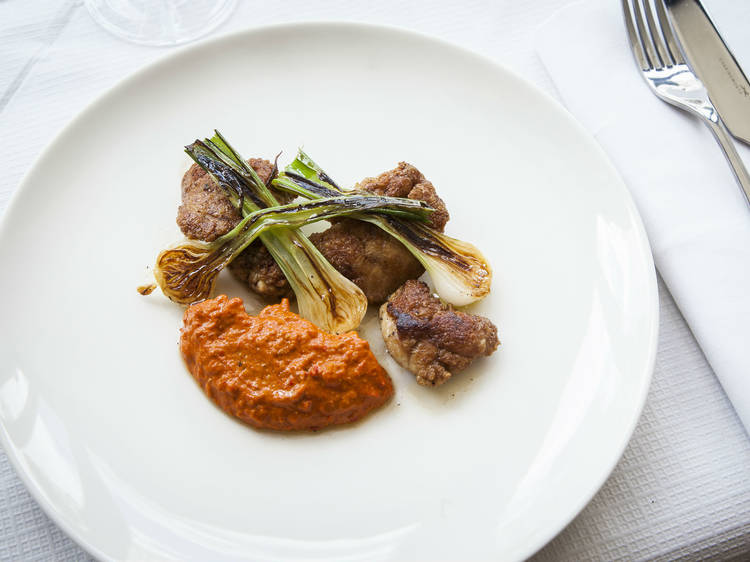 There’s no glitz and no cutting-edge cool at Six Portland Road, but bags of substance to keep the locals coming back for more. Set up by one half of the original Terroirs dream team, this place deals in grown-up food tailored to conventional Holland Park appetites: bouncy lamb’s sweetbreads with piquant romesco, catalan fish stew, boudin noir on spring veg, decadent chocolate mousse with boozy griottine cherries. 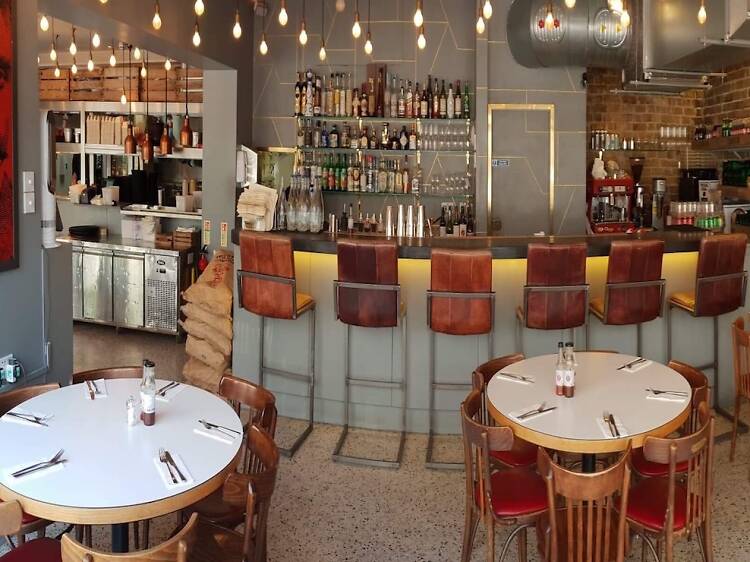 Despite a clipboard-toting greeter, Taqueria has a charming indie feel with its film posters, Latin soundtrack and unfussy food. Messy tacos stuffed with slow-cooked cuts are the big hitters, but there are also tostadas, enchiladas and the usual suspects on the side. Meanwhile, Mexican beers, mezcal and margaritas turn every night into an ‘out-out’ Saturday; friendly staff keep it all coming. 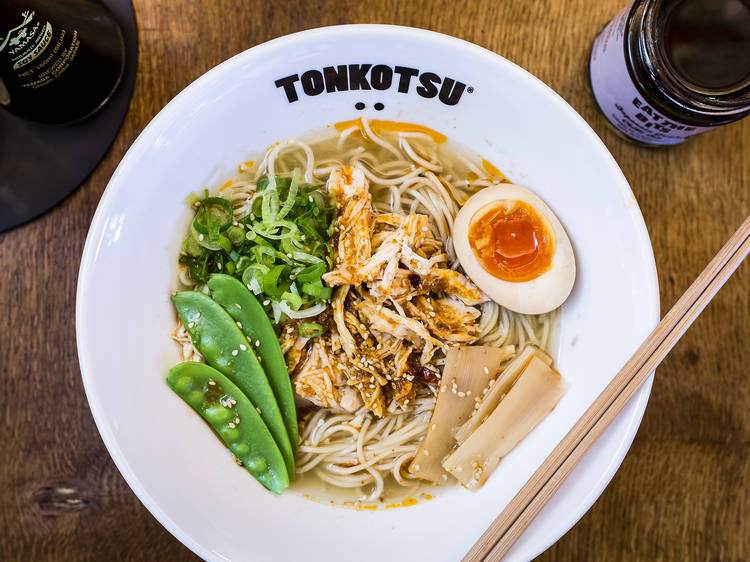 It’s counter seating only at this mini Notting Hill branch of the small chain, which is dedicated to the glories of superior ramen. Thin, homemade noodles steeped in rich, slow-simmered pork bone broth come topped with all the good stuff, and service is so swift that you’ll barely have time to order a cocktail before the main event is blowing steam in your face. Savour this soup. 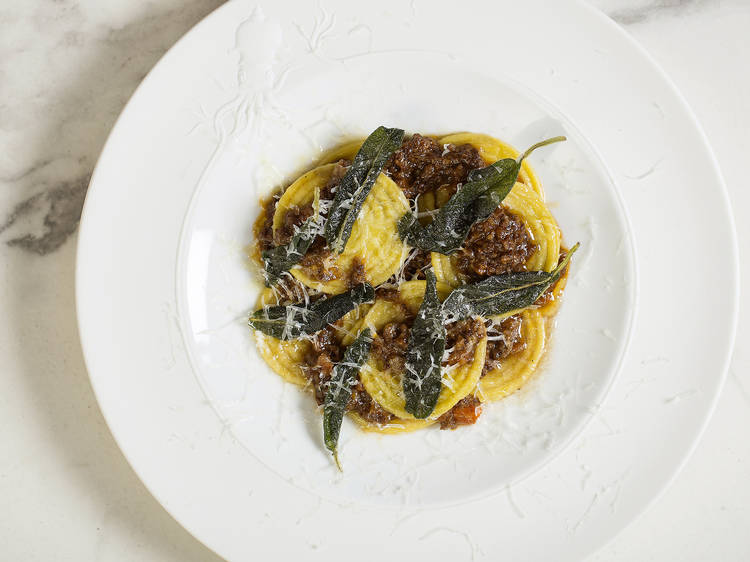 The best restaurants in Victoria

Got tickets to ‘Hamilton’ or ‘Wicked’, or catching a train out of Victoria station? Here’s where to eat beforehand