Things to do in London this week 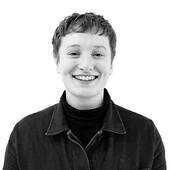 We’re well and truly into summer now as we enter the second week of August – a time for winding down, lying around and remembering the joy of a mint Cornetto. But, it’s also time to make some sun-soaked memories and here’s our guide to the best things worth seeking out in the city this week to help you do just that.

Much of London’s cultural scene from theatre and cinema to music and other performances moves outside for the season. So get your alfresco fix by heading to Shakespeare’s Globe’s super-fun adaptation of the big man’s magical final play, ‘The Tempest’, which begins with Rachel Hannah Clarke’s Ariel hosing down the front rows of the audience (you have been warned) and keeps up the pace from there. Or head to the sunny South Bank for the last week of the National Theatre’s River Stage, with family theatre, dance, workshops, film screenings and more. And, if you haven’t managed to get to Edinburgh this year, get your fill of leftfield theatre at Camden’s Fringe instead.

London’s hopheads can sip on suds in the sun at the London Craft Beer Festival, or head along to Cocktails in the City to see what magic the mixologists at London’s best bars are conjuring up.

There’s also plenty going indoors. Watch an epic concert in the Royal Albert Hall for The Proms; catch Jordan Peele’s much-anticipated new horror movie ‘Nope’, which hits cinemas this week; or see an exhibition of videogame art taking over the Photographers’ Gallery complete with experimental takes on ‘Super Mario Bros’ and ‘The Sims’.

What, you want more? Okay. Make the most of the sun in London’s best beer gardens, lidos, alfresco restaurants and urban beaches. It’s finally come home so let the celebrations commence!

RECOMMENDED: Get your summer sorted with our round-up of the best stuff happening in August. 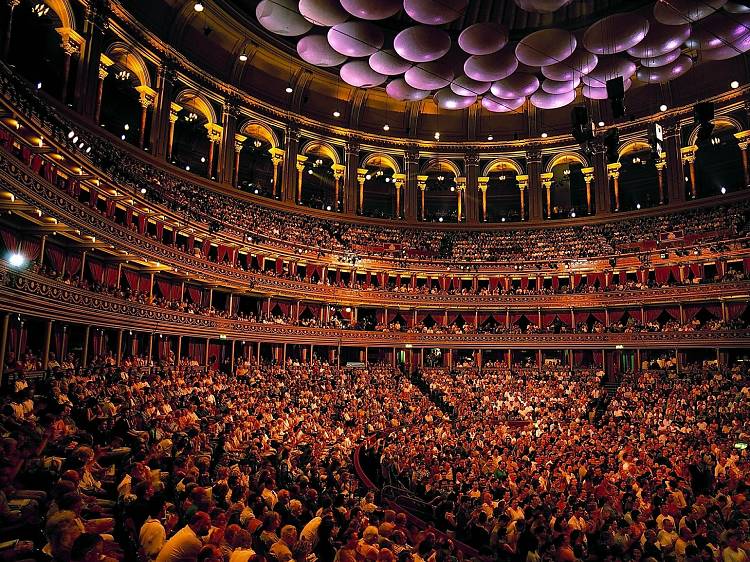 1. Listen to some classical bangers at the 150th anniversary of The Proms

The Proms is the most famous classical music concert series on the planet. This year it’s celebrating its 150th anniversary with 84 gigs over 57 days with more than 3,000 musicians. International ensembles including Berliner Philharmoniker, the Philadelphia Orchestra, the Australian World Orchestra and the newly formed Ukrainian Freedom Orchestra will be performing throughout the epic festival, while this week’s highlights include members of the Mahler Chamber Orchestra performing with Norwegian painist Leif Ove Andsnes at Battersea Arts Centre on Monday and the Philharmonia Orchestra performing balletic classics from Prokofiev and Tchaikovsky alongside the premiere of a new violin concerto from American composer Missy Mazzoli on Sunday. 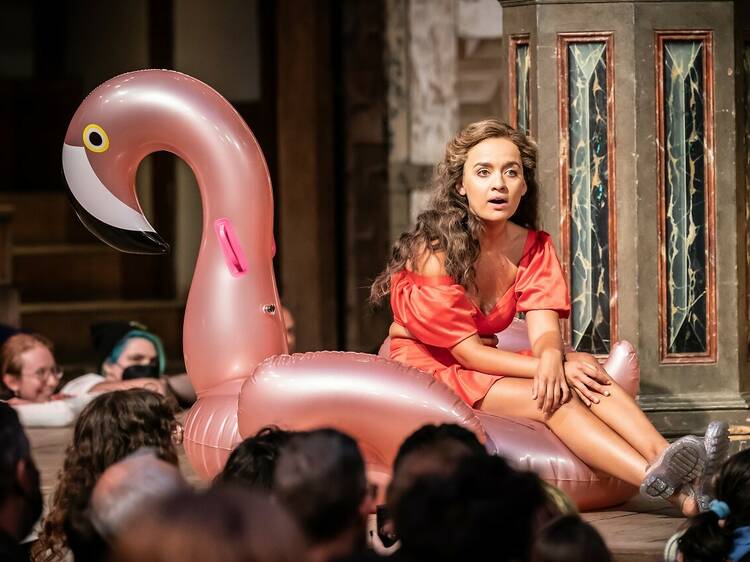 2. See a super-fun production of Shakespeare’s ‘The Tempest’

It’s been a bit of a choppy season over at the good ship Globe this summer, but associate artistic director Sean Holmes has steadied the boat with this amusing, visually inventive, above all fun, take on Shakespeare’s final play. It begins with Rachel Hannah Clarke’s Ariel archly hosing down the front rows of the audience – that’s your tempest for the night – and keeps up the pace from there. Prospero’s enchanted island is a sort of gone-to-seed holiday resort, presided over by Ferdy Roberts’s sorcerer, swanning about in a pair of aggressively unflattering yellow budgie-smugglers and manipulating both his beloved daughter Miranda (Nadi Kemp-Safyi) and Caliban (Ciarán O’Brien), a diminutive guy in a poolboy outfit with a big badge marked ‘staff’. Holmes’s production is aware of the environmental and post-colonial dimensions of a play that’s ultimately about a bunch of Europeans bringing their junk – literal and figurative – to a magical, unspoilt shore. But it’s also a bloody good laugh. A lighthearted ‘Tempest’ with darker undercurrents and a lovely intimacy provided by the moments performed on a small thrust stage, this production is inventive, compassionate and really just a pure joy. 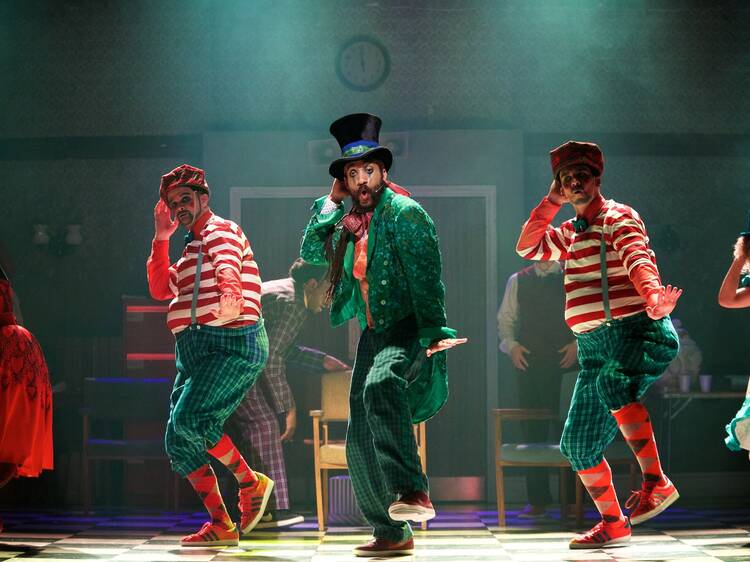 3. Catch some free outdoor theatre at the closing weekend of the NT River Stage Festival

After two years off due to the pandemic, the National Theatre’s River Stage mini-festival has returned to the South Bank for a month of outdoor live music, dance, performance, workshops and family fun. Weekend evenings have already seen a varied programme of entertainment take place in front of the theatre, courtesy of The Glory, HOME Manchester and Hofesh Shechter. And this weekend the National Theatre will itself take charge to close the festival with a bang. See the National Theatre website for updates. 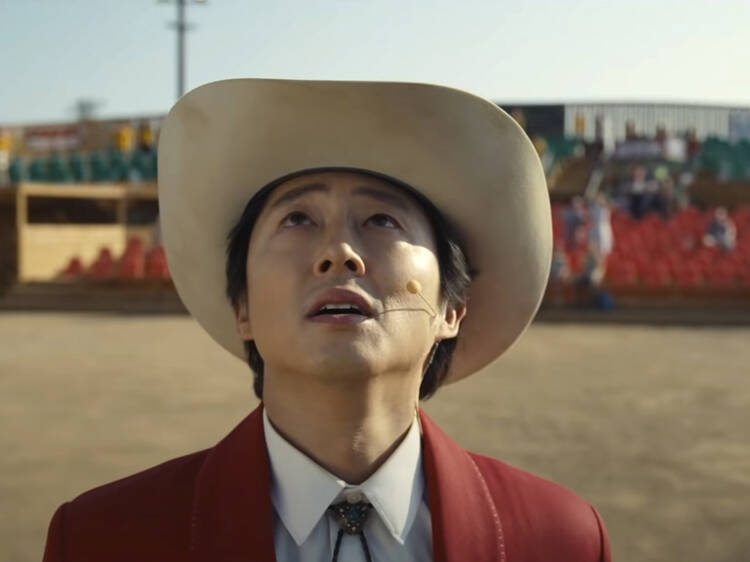 It can’t be easy being Jordan Peele. His first movie came from nowhere to make a motza, land Oscar nominations and create an entirely new genre for your know-it-all mate to drop into pub chat. Now every time he makes another one of his social horrors, we expect the earth: entertainment, a message and a dozen or so Easter eggs to chew over on Reddit. Happily, the writer-director has the game to back it up. Starring Daniel Kaluuya and Keke Palmer as Hollywood’s only Black horse trainers and set against the remote backdrop of California’s Santa Clarita vallery, his latest sci-fi horror ‘Nope’ is a belter. 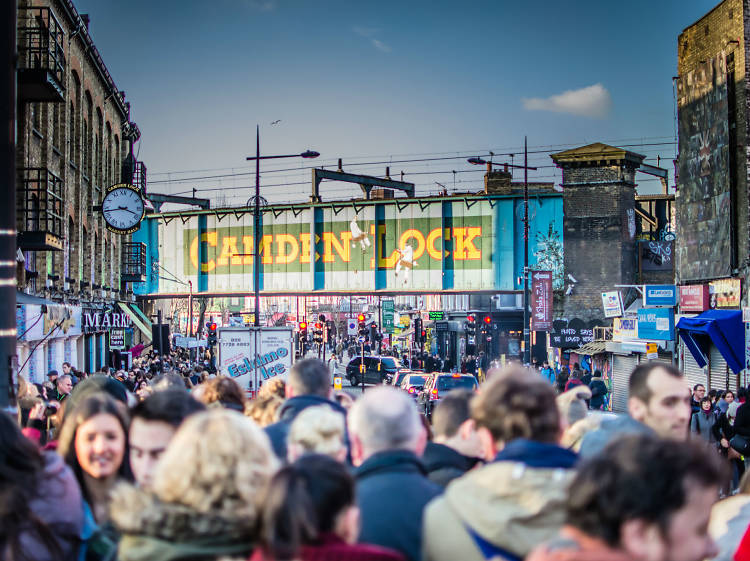 5. Check out a show at the Camden Fringe

Edinburgh isn’t the only place with a bursting, brilliant fringe, and as the Scottish capital’s iconic event becomes ever more expensive, the once-scrappy outsider Camden Fringe looks ever more like a serious contender. It’s a lot smaller than Edinburgh, but still boasts hundreds of events all over Camden, taking in everything from the expected stand-up sets and experimental theatre to kids’ shows, dance, and even magic. Runs tend to be for a night or two rather than the entire month, and prices are bargain basement by London standards, usually less than a tenner. 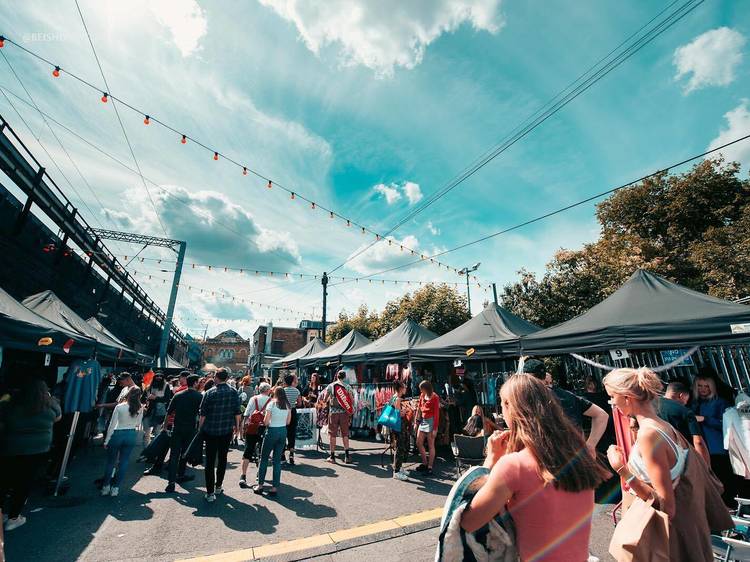 6. Enjoy street food and a boogie at the Black-Owned Hackney Night Market

London’s best Black-owned street-food purveyors, artisan traders and many more of the best Black-owned businesses in the capital will be selling everything from meaty barbecued treats and plant-based burgers to sustainably made clothing and skincare in a former tram shed. Grab a glass of rum punch and shop the night away. 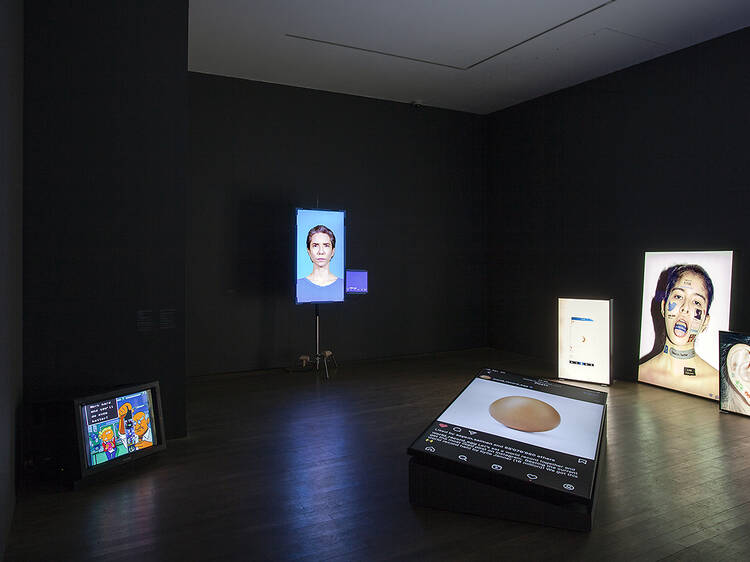 7. Geek out over videogame art at the Photographers’ Gallery

If you think videogames are just for sweaty nerds, this show exploring their artistic potential might just smash your preconceptions into a million pixels. From Cory Arcangel’s minimalist video works – where he’s removed everything but the clouds from the original ‘Super Mario Bros’ and left nothing but the road from ‘F1 Race’ – to Danielle Udogaranya’s Sims avatars with underrepresented skin tones and Cibelle Cavalli Bastos’s AR filters that constantly reshape their own face, the gallery isn’t saying that videogames are art, but explores how artists exploit the mechanics of gaming. It’s funny, incredibly meta and very good. And just like videogames themselves, this show is addictive, absorbing and probably very bad for your eyes. 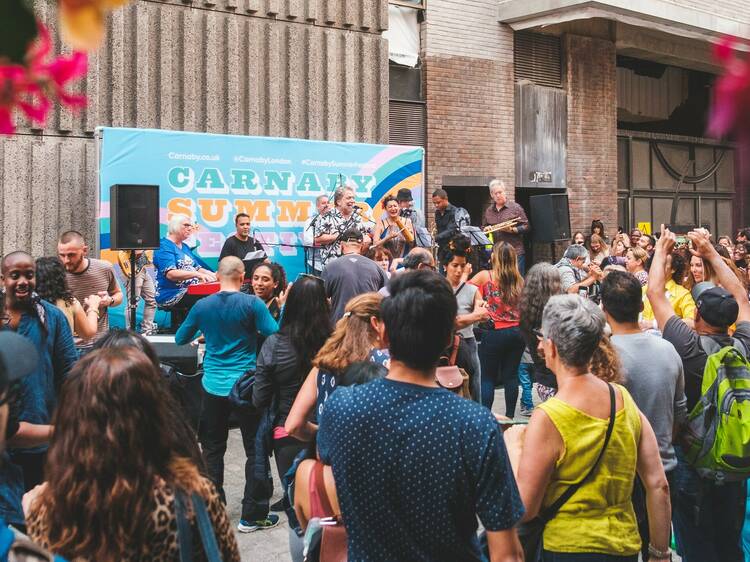 8. Nab yourself loads of cool freebies at the Carnaby Summer Festival

Carnaby Street’s fortnight-long summer festival kicks off this week, with a host of creative workshops, giveaways, live musical performances and loads of great retail and dining offers. A pop-up on Foubert’s Place will host free workshops where you can learn new skills ranging from life-drawing and pottery painting to candle making and kokedama workshops (booking required), while visitors can also get their hands on loads of freebies, including a free water bottle in Just Hype, Korean ice-cream cups in Korean Dinner Party and even a free piercing in Metal Morphosis. Head down to the central London shopping hotspot on Thursday evenings to catch live bands, then finish up by checking out special menus and great deals at 14 different bars and restaurants on the street including Dishoom, Shoryu, Mamma Pastrama and Kanada-Ya. 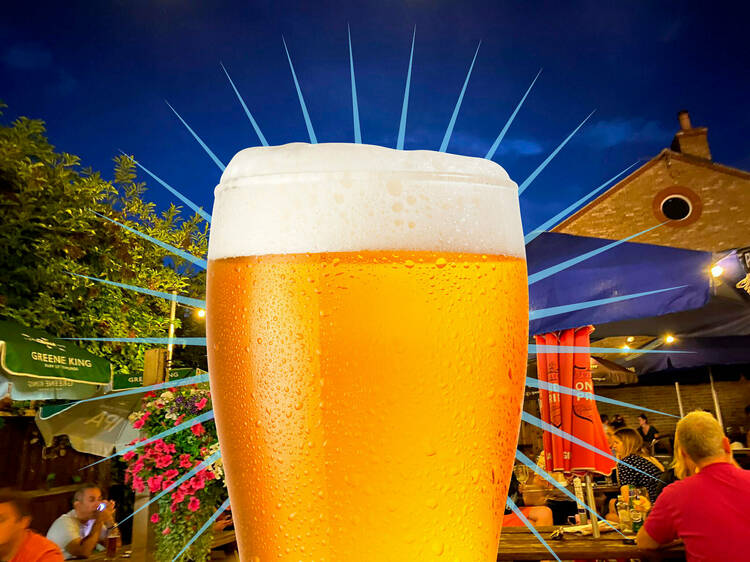 9. Sink a pint in one of London’s best beer gardens

Beer gardens are one of the best things about London. There’s no finer way to spend a sunny afternoon in the capital than supping on a couple of cold boys under the city sky. If you’re looking to sink some pints while you embrace the breezy great outdoors, we’ve got you covered with the city’s best alfresco tanking spots. 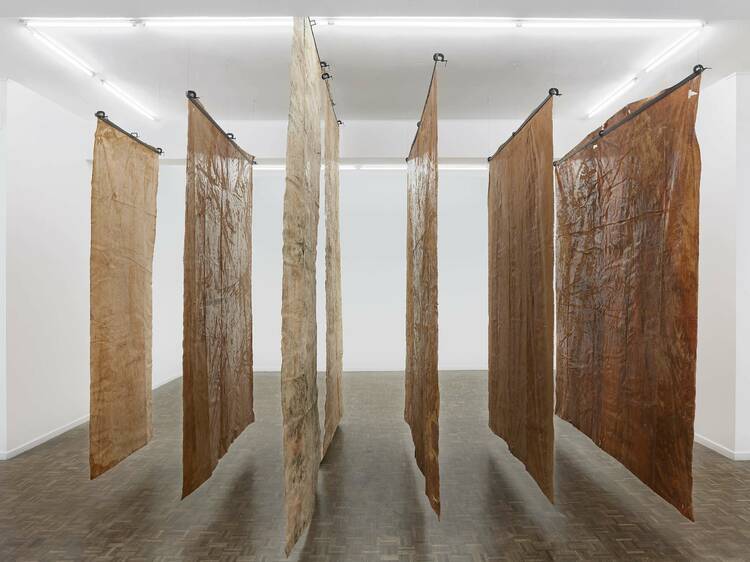 10. Catch dark environmental art at ‘The Show Is Over’

The overarching themes of this dark and troubling group show, curated by Gabi Ngcobo, are ‘loss, threats to the environment, spirituality, labour and silenced histories’, so it’s not exactly a massive cheerer-upper. What it does brilliantly, though, is remind you that global environmental concerns, as articulated by activists and politicians, have a real human face and cost, and that even that articulation remains defined by colonialism. Some of these landscapes may be barren, but far from the show being over, their power and creative impetus seem endlessly fertile.